Verdant Oasis in the City of Angels 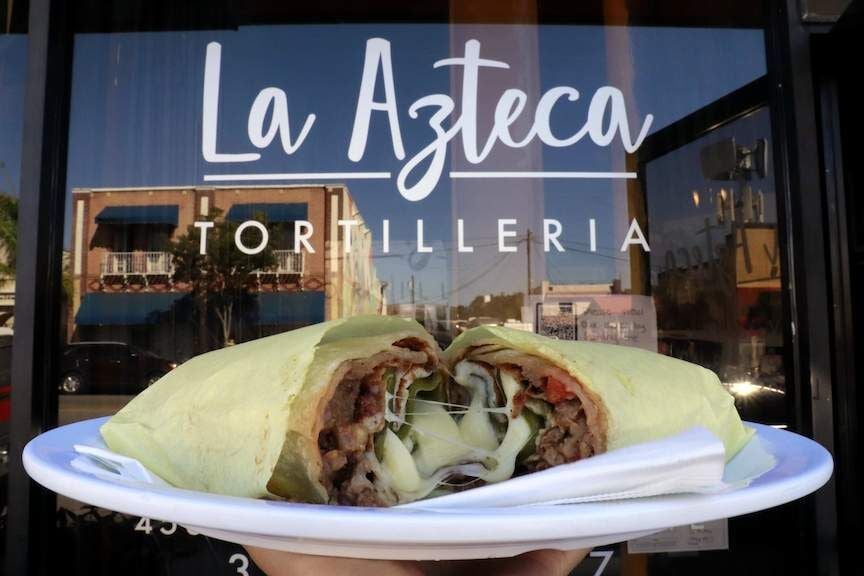 La Azteca is known for its chile relleno burritos as well as its flour tortillas. 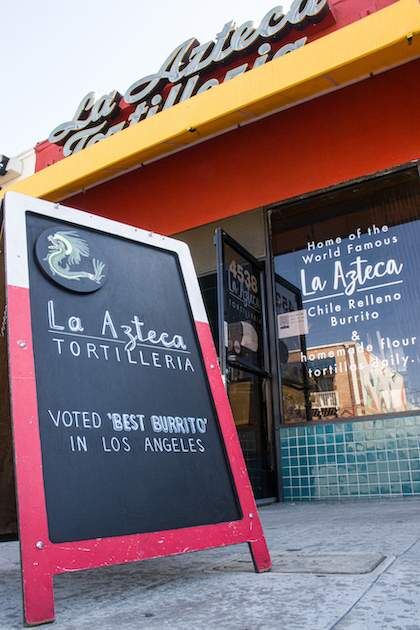 The star of the menu

La Azteca is located in a strip of colorful small storefronts on Cesar Chavez Avenue.

East Los Angeles -- When Juan and Candy Villa purchased La Azteca Tortilleria in 2010, they had no idea how to make handmade tortillas or how to run a business.

What they knew is that they wanted to do things the right way: Serve high-quality, fresh food without reheating items or saving a few dollars with cheap ingredients.

Juan continued his job as a truck driver for the first five years because they didn’t have much business. What they did have in those days were plenty of obstacles: Tough competition and a badly outdated restaurant in need major refurbishment.

But all that hard work has paid off. Loyal customers travel for miles for La Azteca's flour tortillas and chile relleno burritos. The couple has turned down offers to buy the business as it has prospered. And recently, La Azteca was added to Michelin's California Bib Gourmand Guide, which showcases more casual and lower-priced restaurants.

Juan recalled working long days and late nights at the Cesar Chavez Avenue tortilleria, trying to figure out how to keep up with the restaurant’s expenses.

Some family members thought they made a big mistake. There were times the Villas had doubts, too. But the couple kept reminding themselves that if they did things right, they could succeed.

Initially, the main items on the menu were handmade flour and corn tortillas. But the only one who knew how to make them was Candy.

The Villas soon realized they might do well to add new items to the menu, starting with chile rellenos served with sides, like beans, rice and tortillas.

The twist was that they’d prepare it covered with an egg batter, as older generations did.

As the restaurant’s customer base grew, so did its employees, including their kids.

For instance, head chef Lino Garcia, 39, was their first employee and has been working alongside the Villas for over a decade.

“I remember when I came here 10 years ago, and how we worked so hard and we could see, little by little, sales increasing,” Garcia said.

Garcia makes the morning drive from Riverside to Los Angeles six days a week so he and the other cooks can prepare the flour, make tortillas, get the meat and other ingredients ready before the restaurant opens.

He said he doesn’t mind the early mornings and the drive. For him, La Azteca is his second home.

“We all support each other here. It doesn’t matter if you’re new or have been here long,” he said.

Some loyal customers live far away, too.

On a recent warm afternoon, Jess Torres and his wife drove from Rancho Cucamonga and couldn't leave Los Angeles without dining at La Azteca.

“We used to live in East L.A, and then we moved one hour away, but we still come to have some food,” Torres said.

Torres remembers the first time he tried La Azteca Tortilleria four years ago. He had just finished a meal with his wife but a friend insisted that they try the joint. As a compromise, Torres said they decided to buy something just to try a bit of it — but they liked it so much they finished the whole dish.

La Azteca has also won more high-profile praise lately. In September, the restaurant earned a spot on Michelin's California Bib Gourmand Guide. The flour tortillas at the East LA tortilleria are "made in-house every day in full view of the dining room and boast a kind of richness and chew that others don’t," said Michelin.

When the Villas heard the news, it took them by surprise and they were delighted to see new customers visit.

Over the years, the couple has received offers, some lucrative, from folks wanting to purchase the restaurant. Every time, Juan said, it has been a hard “no.”

“All the effort and sacrifices that we have dedicated to this place, we would like to keep it in the family and to be able to pass it to our children,” Juan said.