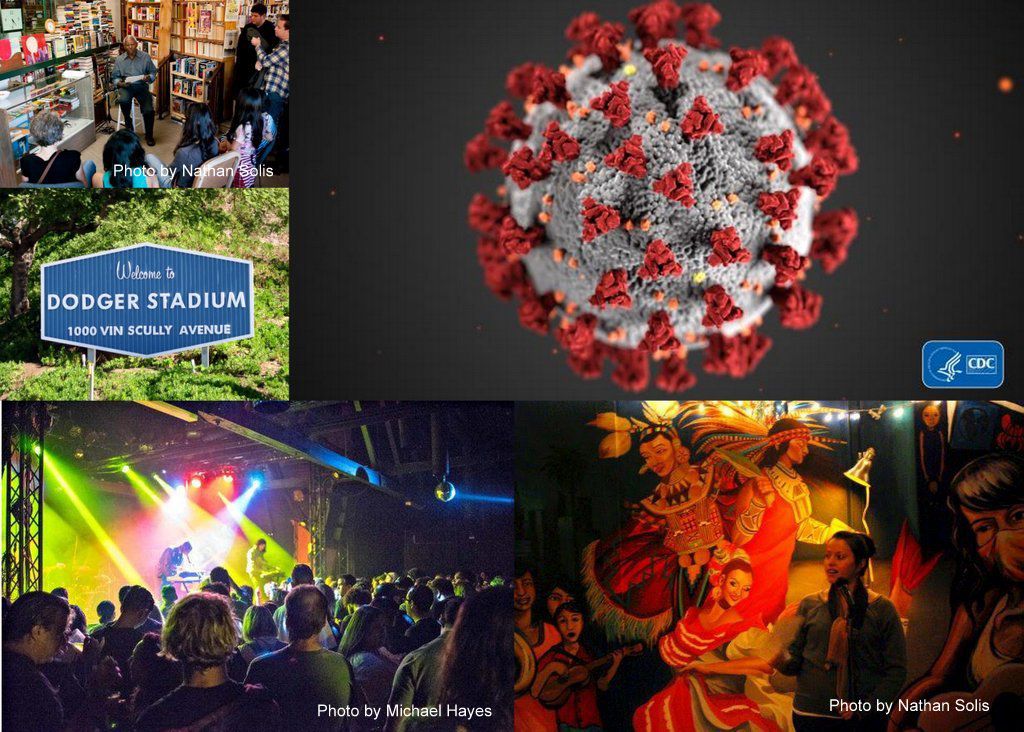 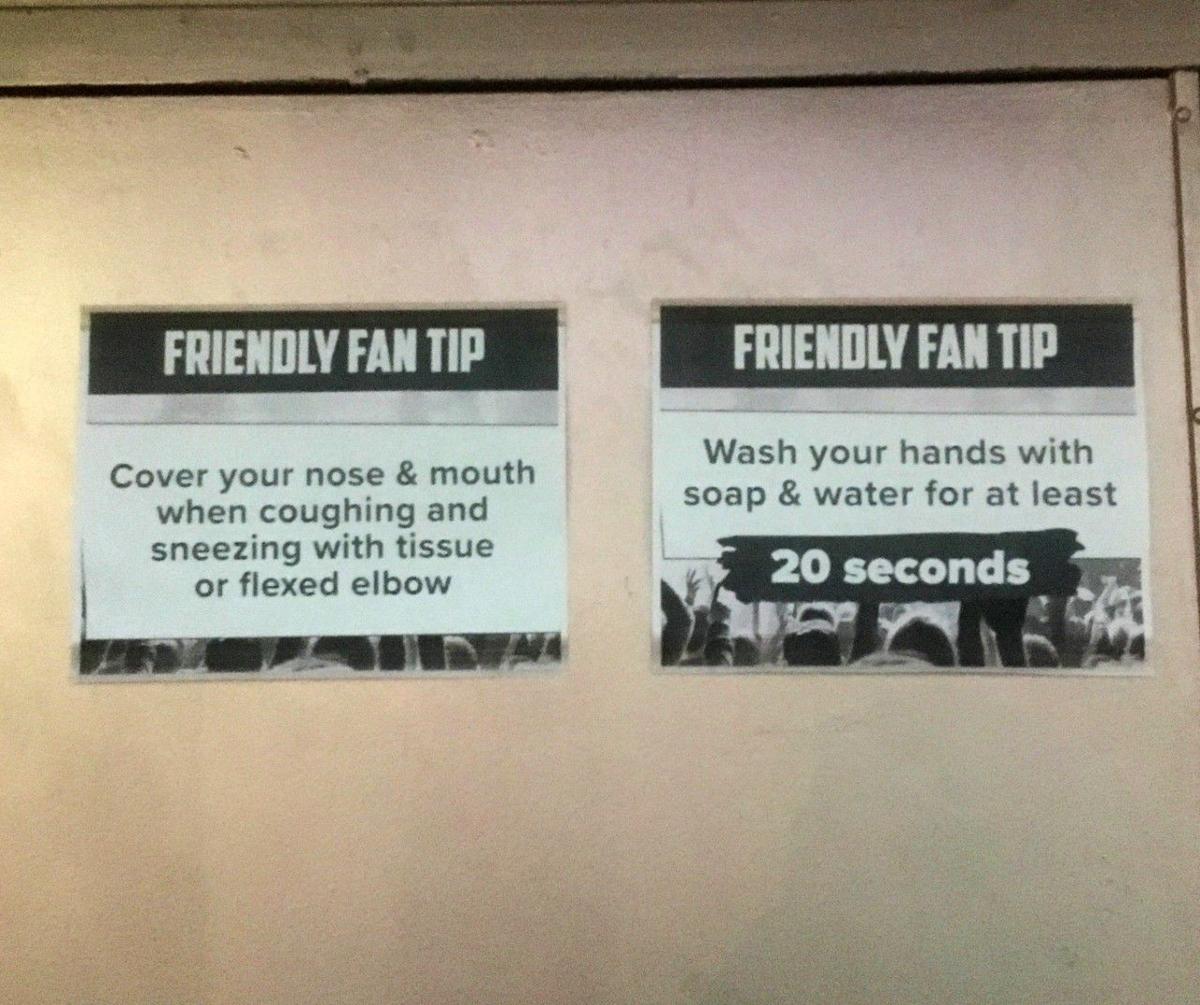 Public health tips posted to the doors of The Echo nightclub in Echo Park.

The growing alarm over the coronavirus has disrupted the Eastside’s cultural scene and nightlife, with concerts and art exhibits being canceled, venues closing and theaters sanitizing seats.

With the outbreak and public anxiety spreading, California Gov. Gavin Newsom has banned gatherings expected to draw over 250 people. Health officials have recommended keeping 3- to 6-feet away from other persons at events, which would be hard to do on a crowded club dance floor.

With a vaccine at least a year away, event organizers are taking heed to the recommendations for “social distancing” and have taken to social media to notify the public of event cancellations and postponements.

"We wish we did not have to be a part of this trend but it seems the safe, sane, and responsible thing to do" -- Skylight Books

Subliminal Projects in Echo Park will be postponing the opening reception for Cheryl Dunn’s “Let Them Eat Cake” photography exhibit set to open at the gallery this weekend. Materials and Applications, a Echo Park-based non-profit cultural organization will be canceling a series of lectures through the month of April. And all programming scheduled at city and county public libraries has been canceled through March 31.

Some events have been affected by travel restrictions and quarantines abroad. Italian musical artist, Caterina Barbieri’s March 24 concert at the Lodge Room has been canceled due to the lockdown of the Lombardy region in Italy and subsequent flight cancellations and the venue’s upcoming Telefon Tel Aviv concert was also canceled.

Skylight Books in Los Feliz has cancelled all author readings for the rest of the month.

"You probably have been seeing these kind of announcements all day and we wish we did not have to be a part of this trend but it seems the safe, sane, and responsible thing to do," the bookstore posted on its Facebook page.

The closures also apply to some of major attractions, including Dodger Stadium, where the team has postponed the March 26 home opener for at least two weeks and the L.A. Zoo, closed through March 31.

In an effort to keep their doors open and avoid the economic toll of “social distancing”, some local venues are implementing safety measures in response to the coronavirus.

Bob Baker Marionette Theater in Highland Park plans to sanitize each theater seat, door handle and surface before and after every show and is temporarily offering to reschedule tickets for those who fall ill.

The Echo and Echoplex in Echo Park are placing extra hand sanitizers at all bathroom areas, concession stands, lobbies and backstage and will allow attendees to bring their own disposable wipes and hand sanitizers. Update: Both venues have cancelled or postponed most shows through March)

For venues, like the Greek Theater, that are choosing to continue with business as usual, they emphasize the fluidity of the situation on their websites and ensure that they will update their policies accordingly.

Update: Here are some more closures and changes:

• All public libraries in the city of Los Angeles will be closed through March 31. Books and other borrowed materials can be returned when libraries reopen. Due dates will be automatically extended and no late fines will be imposed. Librarians are available to provide assistance through telephone reference (213) 228-7272 and online services will remain available.  County libraries in East Los Angeles will remain open but programs have been cancelled.

• The Friends of the Los Angeles River has postponed its annual river cleanup, scheduled for three Saturdays in April, until sometime in October.

• The Autry Museum in Griffith Park and the Southwest Museum in Mount Washington will close to the public indefinitely starting Saturday, March 14.

• The Center for the Arts Eagle Rock is closed until further notice.

• Most of the shows at The Echo and Echoplex in Echo Park have either been cancelled or postponed through the end of March.

• The East L.A. Film Festival at Self Help Graphics in Boyle Heights has been postponed.

• The Echo Theatre Company in Atwater Village has postponed the opening of their production of Poor Clare until April.

• Shows at The Satellite in Silver Lake have been cancelled through March 22.

• Several touring shows have cancelled appearances at the Hi-Hat in Highland Park. But the venue will remain open and limit ticket sales to 200 persons.

• The Atwater Village, Echo Park and Hollywood farmer's markets operated by Sustainable Economic Enterprises of Los Angeles will open as scheduled for now but all product sampling is banned; public seating and eating areas have been eliminated; arts & crafts, music, etc. are suspended and the number and visibility of hand-wash stations have been increased.

• The Silver Lake Farmer's Market will also open but sampling will be prohibited, the community eating area closed. All food must be sold to-go.

• The Echo Park Film Center has cancelled or postponed all screenings and public events through March.

• L.A. Municipal Art Gallery at Barnsdall Park is closed until further notice. Classes have been cancelled.

Now that schools are closed, a most serious endeavor, it would be prudent for everyone to stay home as much as possible. Even with the official state of emergency declaration, people are not understanding that the reason is to stop spreading as people have not been tested, can't get a test yet if they need one (there is a case at may daughters school where a student could not get tested and we are still waiting to hear), and could be spreading without knowing. I have even heard some treating it like a vacation, making plans to go shopping or out to eat, as shops and restaurants about the only thing left open. But this will defeat the whole purpose. LAUSD wants them to stay inside, despite the challenge, for safety and precaution....