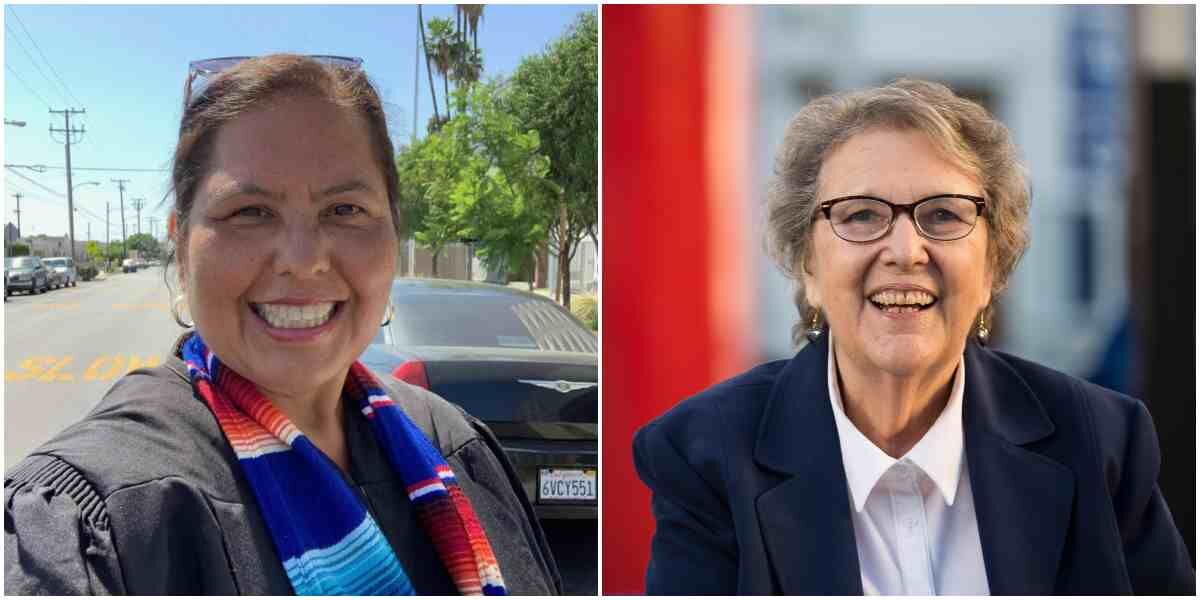 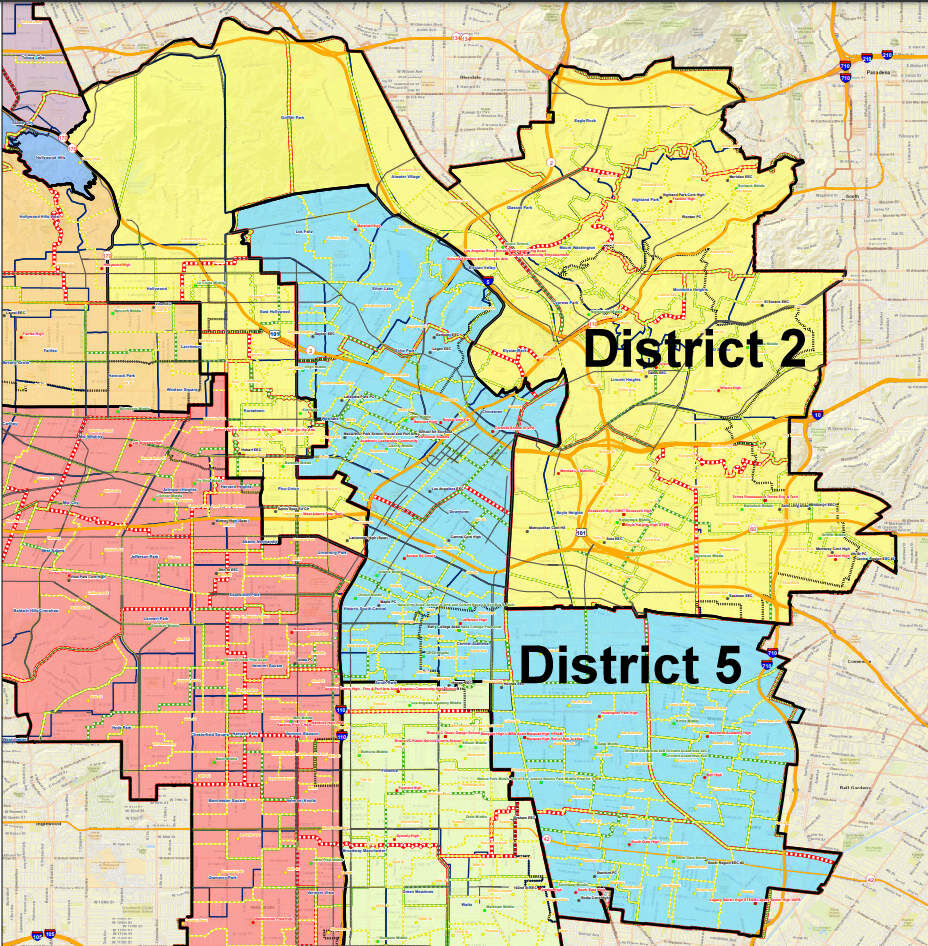 Draft Map 1A would make the most significant changes. District 2 (Garcia) in yellow. District 5 (Goldberg) in blue. Go here to view a detailed map in PDF format. 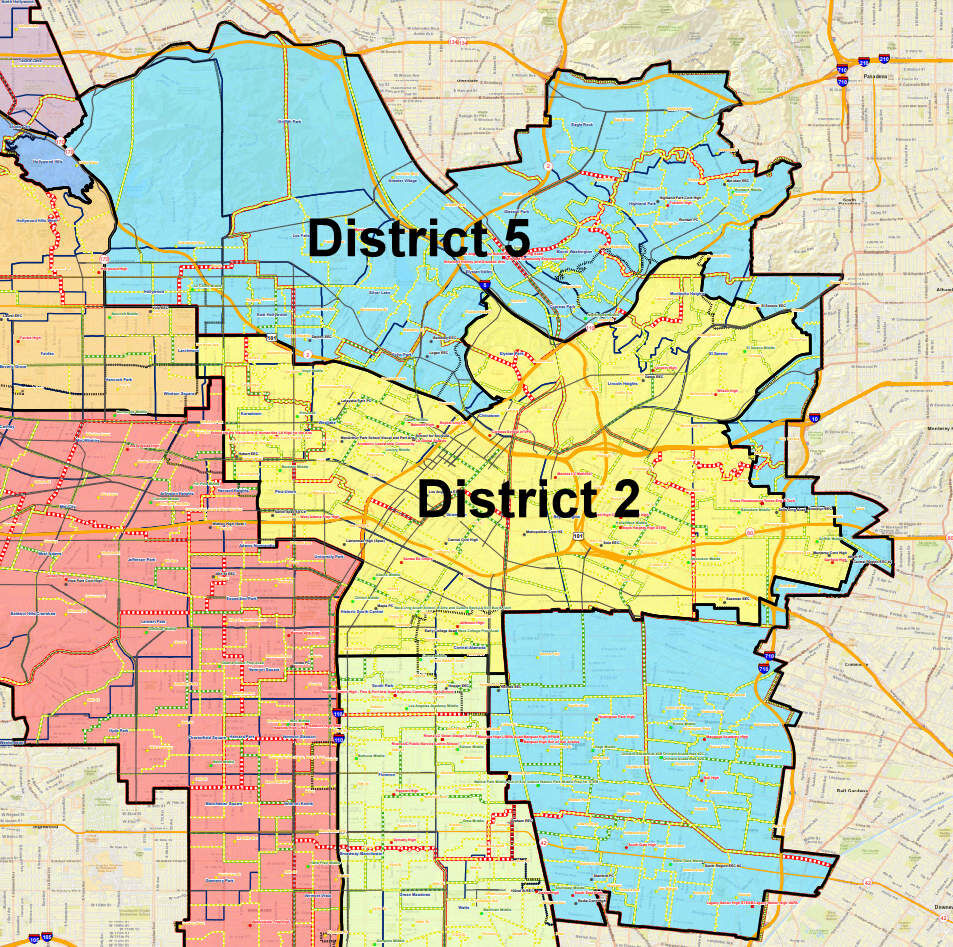 Draft Map 2 would make minimal changes to the current boundaries. District 2 (Garcia) in yellow. District 5 (Goldberg) in blue. Go here to view a detailed version in a PDF format. 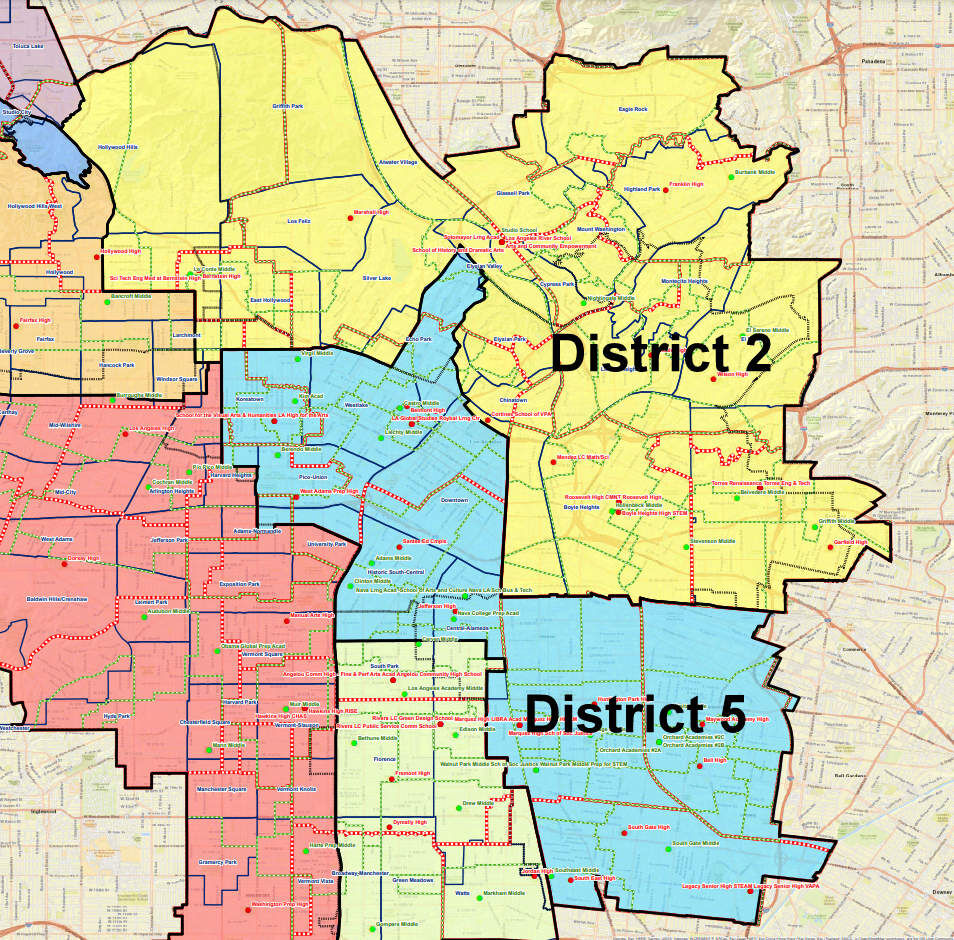 Eastside residents have been reviewing maps this month that could lead to big changes for school board members Monica Garcia and Jackie Goldberg as well their constituents.

The Los Angeles school board, like other government entities, is in the midst of having its political boundaries redrawn as part of redistricting. It’s an exercise that takes place every ten years to take into account population changes reflected in the most recent U.S. Census.

Members of the LAUSD Redistricting Commission have been tasked with creating school board member districts that are roughly the same in population while keeping communities with similar interests together and addressing several other issues, said commission chairman Luis Sanchez.

Based on the latest census data, the LAUSD Redistricting Commission earlier this month put out three draft maps for the public to review and comment on proposed boundary changes. Those maps will include potential changes to the school board districts on the Eastside, where District 2 is represented by Garcia, and District 5 by Goldberg.

The Commission is expected to select one of those three draft maps on Wednesday, Oct. 27, before its forwarded to the LA City Council for adoption, Sanchez said. That map will be subject to more public review and possible changes but a final version must be adopted by the end of the year.

Of the three draft maps, Map 2 (shown above) calls for some adjustments but looks much like the districts do now, said Luis Sanchez, chairman of the LAUSD Redistricting Commission

It’s Map 1A (shown above) that contains the most changes, with Garcia and Goldberg exchanging several neighborhoods.

Under Map 1A, Garcia’s District 2 would lose Downtown L.A., South L.A., Pico-Union and Westlake but gain all of unincorporated East L.A. as well as other neighborhoods now represented by Goldberg in District 5; including Atwater Village, Eagle Rock, El Sereno, Glassell Park, Highland Park, Glassell Park and portions of Hollywood.

Drawing new boundaries has been made even more challenging given the population and demographic changes experienced on the Eastside.

The two districts lost a combined 70,000 residents since the 2010 Census, Sanchez said. However, the population of Downtown has ballooned in the last decade.

“They are a real community of interest now because downtown now has about 100,000” in population, Sanchez said.

"We'll figure it out"

Board member Jackie Goldberg said that looking at the draft maps she prefers Map 2 because it would keep the district more or less as it is now.

“Personally, I urge people to keep (the map) the same ‘til I’m gone,” Goldberg said. “But that’s for very personal reasons.”

Keeping the district as it is would allow Goldberg to maintain the working relationships she and her staff have established with each of her district’s school communities. But, if she ends up with a completely redesigned district, Goldberg said she and her staff will adapt.

“If we get new schools, we’ll figure it out,” she said.

Garcia, who did not express a preference for any of the maps, said she learned long ago that redistricting is hard work and difficult to make everyone happy.

“There is always a decision that is made, and we’ll have somebody feel it should have been different,” she said.

Update: The commissioners postponed recommending a final map until Oct. 27

What map makes the most sense for the Eastside?