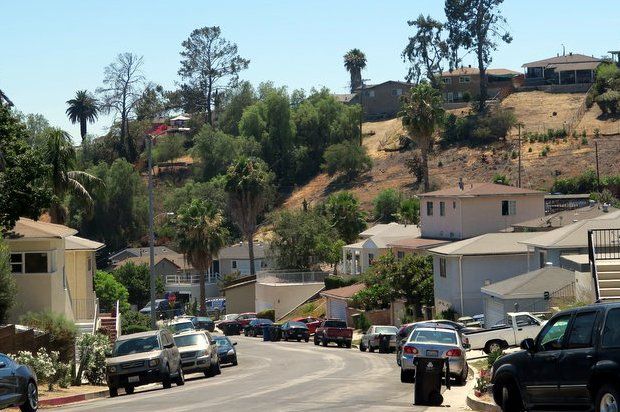 El Sereno  —  Home prices as well as tension over gentrification have been on the rise across this Eastside neighborhood.  Curbed L.A. reports that several new and renovated homes have been hit by anti-gentrification graffiti — including one occupied by a builder of affordable housing.

Messages like “Fuck Gentrification” and  “Your house raises our rent” started appearing last fall, with photos posted on Instagram and other social media sites.

El Sereno home owners association doesn’t like horizontal fencing. Also this style of fence is nothing more than a wide ladder to an intruder. #openconcept #spaceinvaders

Ironically, one of the homes targeted by the taggers is the residence of Tak Suzuki, who has overseen the development of more than 300 affordable residential units for low-income residents as a director at the nonprofit LTSC (Little Tokyo Service Center). He’s also a board member of the Southern California Association of Non-Profit Housing and serves as a commissioner of the Housing Authority of the County of Los Angeles.

Suzuki told Curbed that he and his partner moved into a newly built home after living in neighboring City Terrace.  Said Suzuki:

“The people who are behind this, they’re not open to discussion …. They don’t want to be involved in policy-making, community planning, and updating processes  … It’s just really a very narrow approach they’re taking.”

Suzuki assumes the couple’s house was tagged because it’s new.

A group with a Facebook page called  El Sereno Against Gentrification has been active.  But it’s not clear who is behind the anti-gentrification tagging.