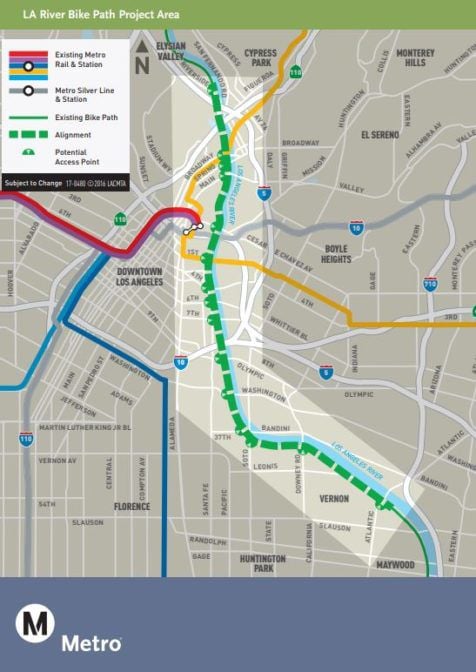 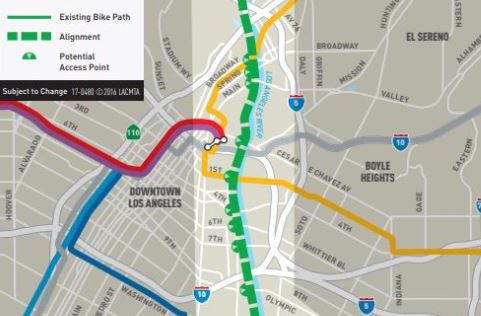 The 8-mile river path extension would run between Elysian Valley to Vernon. It has close to $365 million in Measure M funding. It’s expected to be completed by 2027.

During the meeting at Boyle Heights City Hall on First Street, one of the activists took to his bullhorn to denounce development in the working class community that’s been a flashpoint over gentrification.

Much of his speech in front of the small meeting was hard to make out on the video. The audience looked slightly bewildered at first and later taking up their own cell phone video. The anti-development band left, chanting, hitting metal pails ,and one protester posted a fluorescent pink sheet that said “null and void” on one of Metro’s displays.

Outside (where audio was clearer) one of the hooded protesters said the Metro board, like L.A. City Council, “develop, develop and develop recklessly, arrogantly, turning Chicano and immigrant communities like Boyle Heights into playgrounds for the rich. That’s why this whole so-called community meeting is a sham.”

A second meeting was held at the Southern California Institute of Architecture (SCI-Arc) in the Downtown Arts District without interruption, Streetsblog LA reported. Another meeting is scheduled this week in Cypress Park on Thursday, Feb . 7.