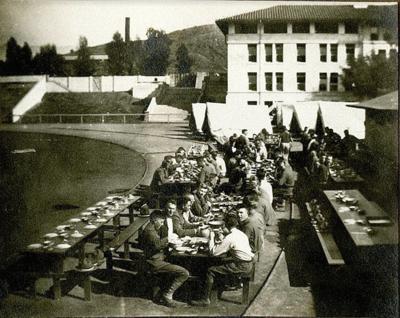 It was mid-September 1918 when cases of the deadly Spanish influenza began showing up in Los Angeles.

The pandemic first affected seamen and soldiers returning from World War I, and on September 22, the first civilian cases appeared in downtown Los Angeles. Among the infected were 55 students at Polytechnic High School which was then located at Washington Boulevard and Flower Street.

The outbreak would quickly spread across the city and into Northeast L.A., where the newspapers of the time chronicled the lives of people stricken with the virus and the deaths of veterans, school teachers, preachers and bread delivery men.  “It swoops down upon you, like a cyclone on the plains of Kansas, without any warning," wrote a Highland Park editor.

As Los Angeles braces itself for the worst of the coronavirus, we took a look back at the century-old pandemic as it swept across Eagle Rock, Garvanza, Hermon and Highland Park.

At first, the flu seemed manageable

The Highland Park News stated on October 19: “Highland Park and Garvanza have quite a number of people sick with the Spanish influenza, though there are probably fewer people ill with that disease in these parts…due to the higher altitude and to the fact there are less fogs here. There are no deaths in Highland Park directly due to the influenza. Two Highland Park people, Mrs. Meerdink and Mrs. Bertha Wilson contracted the disease elsewhere and died from it.” The Meerdinks (“well-known and highly respected people”) lived on West Avenue 54 and were members of the Highland Park Methodist Church.

“Mrs. C.H. Norton and daughters Katherine and Nell of Irvington Place have all been confined to bed with the influenza but are getting along nicely,” reported the Highland Park News which earlier had announced that on November 23, Hermon had 20 cases of the flu. “Among the sick is Rev. W. E. Shepherd.”

The Eagle Rock Sentinel shared news of its bedridden residents in late December. “Betty Creawell is sick at home on East Eagle…Arthur Boyce of East Colorado Boulevard will not enjoy Christmas as he has the flu.”

Private Christ Kirk, Jr. of Garvanza was one of the first men to volunteer as a nurse to care for flu patients in Portland; he contracted the disease and, after a week perished. The Kirk family lived on 726 Chestnut Avenue.

Mr. and Mrs. Arthur Love of East Avenue 58 received a telegram telling the death of their son Harvey who was in active service in France from the flu. Likewise, enlisted soldier Edwin R. Scaefle contracted the flu in France and passed away at age 27.

A recent graduate of Polytechnic High, young Charles Kulli had enlisted in the Navy and according to the Highland Park News, “passed his physical examination at the 100 percent mark.” His parents, who lived on Avenue 65, “thought their son was in good health as a letter from him only a few days before stated he was feeling fine … The news [of his death] came as a big shock to the young man’s Highland Park and Garvanza friends.” He was only 19-years-old.

The disease inflicted people of all ages and backgrounds

Lillian Peterson, only 15-years-old, died in her home at 5828 Meridian Street. A clerk at Montgomery Pharmacy in Highland Park, Sam Quertermus passed away at his Union Street home leaving a bride of only two months. Well-known Highland Park bread delivery man Roy Wellwood was sent to the hospital after contracting the flu (it’s unknown if he recovered).

“Harry Redding of the Wells Fargo office is confined to his home with influenza,” reported the Highland Park News on December 14. “This time of year is Mr. Redding’s busiest season and it is a very importune time for him to be ill, but the flu germ seems to be no respecter of persons nor does it consider the value of a man’s time.”

Miss Bertha Wilson, who taught gardening at Monte Vista School as well as at Hermon and the Avenue 62 Schools, “went east to spend her vacation with relatives…she returned to this city less than 10 days ago, and the day following her arrival she took sick and died in a short time,” stated the Highland Park News on Oct. 19.

“It is with a sad pen that we chronicle the sudden passing away of Miss Emily Montgomery, a beloved teacher in the grammar school,” reported the Eagle Rock Sentinel, Jan. 2, 1919. “No sadder death has occurred in this city for a long time, one that has touched many school children and … so many of our people. Miss Montgomery was … beloved by all who knew her because of her ability and her sunny disposition.”

Still some residents managed to survive the flu

“Chris Voerz who was near death’s door with influenza and pneumonia, is up and around again,” announced the Highland Park News in February 1919. “Chris…says that if he had a dog sick with influenza he would shoot him at once.”

“Mr. and Mrs. Weller of 327 W. Avenue 53 are able to be out again,” wrote the Highland Park News on December 21. “They and their children have all been victims of the influenza….Reverend Hill, pastor of the Christian Church is out from under the influenza quarantine and expects to fill his pulpit tomorrow morning.”

The editor of the Highland Park News, who survived the “a tussle with the influenza,” offered personal testimony: “It swoops down upon you, like a cyclone on the plains of Kansas, without any warning. Today you are well, tomorrow you are so sick you don’t care much, whether the paper comes out again or not or whether Hoover will run for President. All at once your back feels like a washboard and your head as big as a little wash tub, as hard as a rock and ready to crack open any minute.”

When it was over in 1919, an estimated 2,700 Angelenos had died from the pandemic

Respect eachother , keep our space , be extra clean and courteous to eachother . Do things out of love and it's the best time to be a part of community and help by staying indoors. Tonight and every night I pray for us all. Thank god you are reading this and thank god for another day.