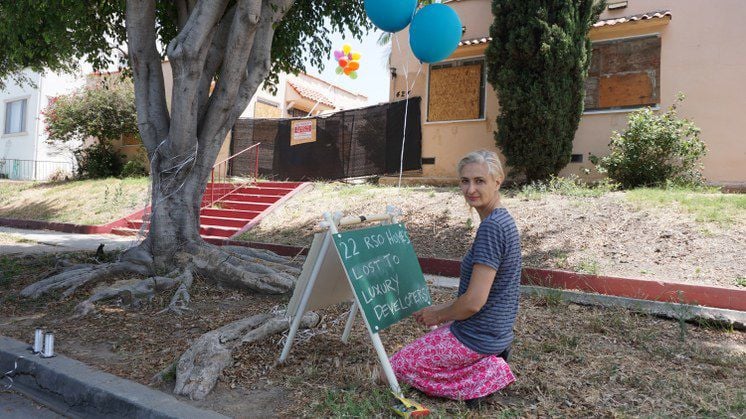 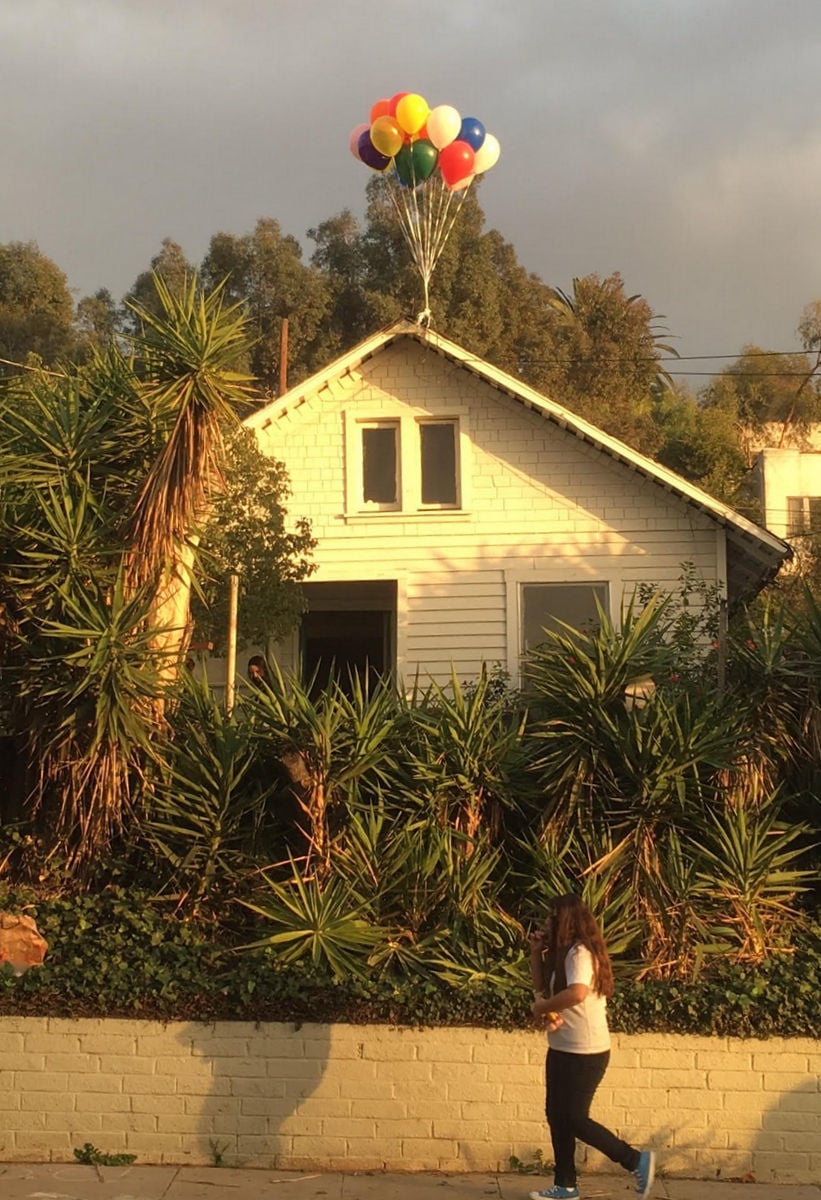 Silver Lake -- Anne Hars is a contemporary artist whose talent and passion in recent years have been spent on helping neighbors as well as strangers caught up in the city’s housing crisis.

Hars became a housing activist after witnessing developers push some of L.A.'s most vulnerable tenants out of their homes to make way for new and expensive housing developments that current residents cannot afford.

She is perhaps most well known for her Uphouse Project, which used bouquets of balloons to mark homes and apartments slated for demolition - a visual protest to the displacement of families and others during the city’s ongoing housing crisis.

Hars tells the Eastsider about the inspiration behind her activism and why she might modify her balloon protests.

What pushed you to get involved in housing activism?

In 2012 my husband was in a catastrophic motorcycle accident that left him with a severe brain injury and his body broken. I could not work because Bill needed care 24/7, so we went from pretty good prospects for a couple of artists and homeowners with two incomes to nothing. I would wheel Bill to the corner of our street and I would often see Rachel, a young woman with a severely impaired child, James, in a wheelchair. James had frequent seizures and living within a short distance of Children’s hospital on Sunset was crucial for his survival. We would chat or just sometimes nod to one another. Those moments of understanding, sympathy, and recognition were infinitely helpful to me and really at the core of a neighborhood.

When I found out her family was being bullied and harassed by a developer in order to resell the property at a higher price, tenant free, I knew I had to do something. I had long talks with the developers trying to persuade them to change their plans or build around some of the existing structures. I even had an architect redesign their plan to make it better suited to the neighborhood, but they weren't interested. They told me their plan was suited for a “different” demographic.

Everywhere I looked this kind of discriminatory architecture was going up. I realized that old people, physically handicapped people, and families were being designed out of the neighborhood. I went to countless meetings at the planning department and city hall about the family's plight. The family of six now live in Watts in a tiny one bedroom house, a very long commute to the hospital and all of James’ services.

Tell us about the UpHouse Project

The balloon project started with Rachel and Jame’s house. I had watched the movie Up with my husband and felt like I was going to end up just like that old guy with the tennis balls on his walker yelling at the developers. I really related. I wanted to put a bouquet of balloons on their house, but I was so busy taking care of my husband and working with Elena Popp of the Eviction Defense League along with a group of neighbors who had also gotten involved that it wasn't until the day the family was evicted that I finally got the balloons up. That’s how the project started. People all over the city started getting in touch with me. It’s been pretty heartbreaking since I have met so many people who have lost their homes. I attend as many meetings as I can and have seen exactly what mechanisms are used by the city to disempower communities who have been working to save families like Rachel’s.

Where does the UpHouse Project stand now?

Recently I was made aware that balloons are less than great for the environment, so I have been giving that some thought. It’s tricky because the amount of waste balloons cause is negligible to the amount created by the demolition of existing homes. These houses are going to our landfills for the most part. Modern construction techniques for homes on average waste about 40% of materials brought to a site to build them.Just from an environmental standpoint, this is a disaster so comparatively a bouquet of balloons is a small price to pay. One solution I came up with is creating drawings of the houses with balloons.

What causes or projects are you currently working on?

I literally wait for a call. A few months ago, a friend called me at 1 am and told me about a young paraplegic whose landlord was going to demolish her ADA accessible bathroom at 7 am the next morning basically forcing her to move out of her rent stabilized apartment. So I showed up. That was a really tense battle. It really enraged a lot of people that this had happened. We managed to get the city and the landlord to negotiate but it was extremely touch and go. The Los Angeles Tenants Union showed up. They are a great organization and I hope anyone reading this who is a renter will join.

Right now I am worried about an 83 year old neighbor, Maria, who finally took a buyout after years of landlord harassment. I worked with her for about 10 years to keep her in her rent controlled apartment. One landlord actually stole her garden hose so she had to fill gallon jugs of water to water her garden. We actually went to the police and filed a police report. The police were fantastic. they went to the guys house and made him give the hose back! Maria and I have a long history, so when she showed up at my door homeless I can't say I was surprised. She stayed with me for a few days and then moved to another neighbor’s house. They say "it takes a village" but if you kick out everyone and raze all the houses you don't have a village anymore. Maria needs her village- her neighborhood to help her. If you live in LA, you live in a village- whether its Echo Park, Silver Lake or somewhere in between. Be the village.

Thanks Anne for all your hard work and thanks EastSider for posting these stories....I don't really know of another source for our local news

"They say "it takes a village" but if you kick out everyone and raze all the houses you don't have a village anymore." Uh, no, it is just a new village, often filled with better neighbors.

Wow, Joey. “Better” people? Thanks for letting us know you’re not among that group. Maybe wealthier people will move into the new developments, but that doesn’t make them better or worse. I would definitely not consider people who look down on others with less income or more challenges to be in the “better” category.

Joey, attitudes like your's do not make for "better neighbors."

First they came for the Communists

Because I was not a Communist

Then they came for the Socialists

Because I was not a Socialist

Then they came for the trade unionists

Because I was not a trade unionist

Then they came for the Jews

Because I was not a Jew

Then they came for me

And there was no one left

To speak out for me.”

Anne is an Angel. But unfortunately, our councilman here, Mitch O'Farrell, who basically has dictatorial decision making power at City Council over this problem in his district, listens only to the devil, and takes ungodly amounts of money from the developers, construction unions, and all their associated people.

Even if you appeal these projects and evictions to the City Council -- and you have to pay for that appeal -- O'Farrell will take action to prevent you from having the hearing before the full City Council, he has the matter put on what is called the Consent Calendar, for which there is no discussion, no hearing, your appeal is automatically rejected.

And in doing so, he is presiding over the elimination of rent control and with it affordable housing, by virtue of eliminating the buildings under rent control and letting them be replaced by housing only for the wealthy.