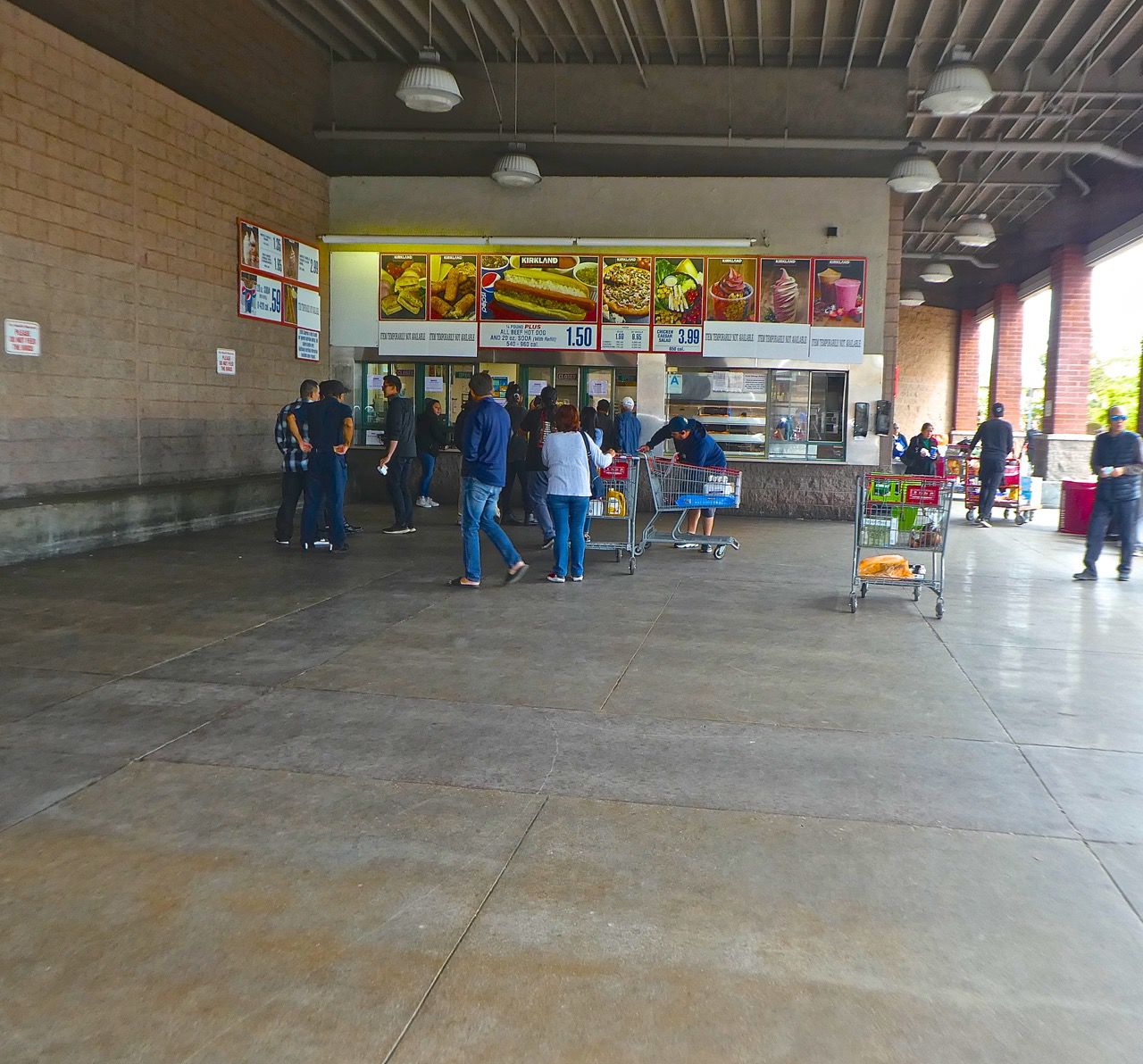 The food stand at Costco, without seating or condiment areas.

Atwater Village - Things are more civilized at Costco this week than last week, said Silver Lake resident Sandy Driscoll, who recently made a run at the store on Friday for a few of her neighbors.

But her description still sounds like a dystopian fever dream.

“I went about 11:30 and it was not crowded, but they had employees at the entrance sanitizing carts even for those like me who were wearing gloves and a mask,” she said, noting that about 35% to 40% of the other customers also wore masks and gloves. “At the check stand lines, they had tape on the floor marking off six-foot distances. They also did this at the food court.”

She added, “Everyone was very considerate and most adhered to the ‘six-foot’ rule.” It contrasted well with last week, when she saw a fistfight almost break out in the bread aisle.

Though all seating and some items have been removed from the food court, they still have the $1.50 hot dog with the 20-ounce refillable Pepsi, Driscoll said - with condiments added only by the employees, upon request.

Other items elsewhere in the store, however, are still usually sold out during regular hours, she said - paper towels, toilet paper, beans, rice, disinfectant wipes, bleach and rubbing alcohol.

The store also has more personnel than usual (including security) making sure that people don’t crowd into the entrance, Driscoll said.

And various news sources have reported that - like many other major store chains - Costco now has special hours when only people over the age of 60 or who have physical handicaps can shop there.

In Atwater Village, it’s Tuesdays and Thursdays, from 8 a.m. to 9 a.m., Driscoll said. But it's best to check ahead before you make your Costco run.

Where have you stocked up?

Where have you had the best luck buying hard-to-find items like toilet paper, beans, rice, disinfectant wipes, etc? Offer alternatives in the comments section.

I was at the Alhambra Costco last Friday, TP , paper towels, I went early. They were open by 9am (maybe because I'm clearly older - white hair) Smart & Final Lincoln Heights, I was there at 7am (listed as 6 am), almost fully stocked. What's better than a well stocked Smart & Final?

I went to Costco early this weekend, and was surprised that they had lots of Kirkland branded TP. Looks like they loosened the restriction on water too.

I won't even identify the local supermarket I shopped at last Sunday that was virtually empty at 7am. I was able to stock up on everything (except TP?!?) including coffee, beans, bread, produce, and Clorox wipes(!?!). All items that were in short or no supply just a week ago. I don't know if Palm Sunday had something to do with it(?) but it worked for me! I'm good for the next few weeks.

I got some TP and some real food at Whole Foods. I only bought one package of TP, because what is the deal with TP? So many things come to mind as way more important--like actual food.