The Eastsider, as a community service, is providing free access to all news coverage of COVID-19. To strengthen our newspaper's ability to keep our community informed during unprecedented times, we ask for your financial support. Click here for options. 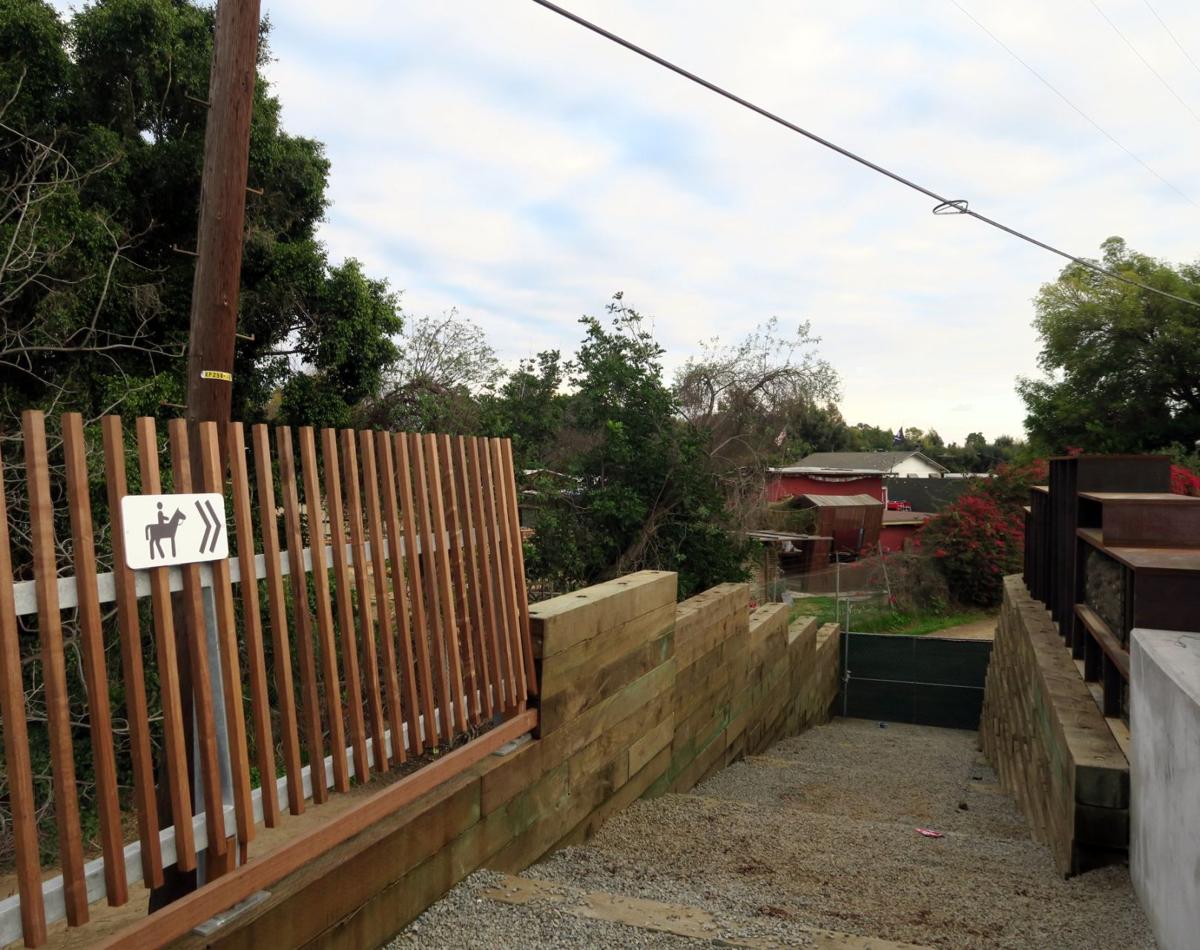 The horse apparently collided with the wall (pictured at right) and then tumbled down into a passageway leading to trails. 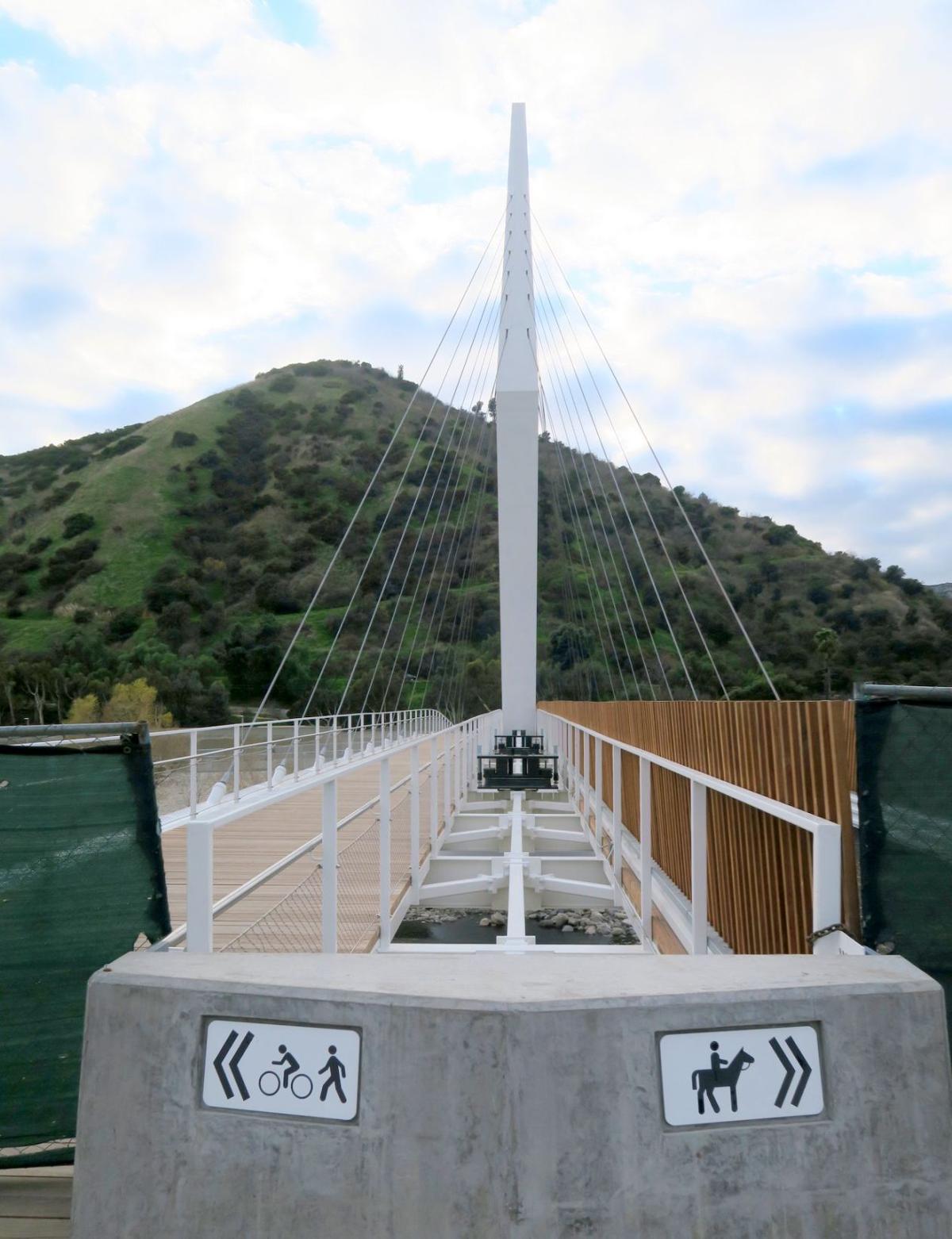 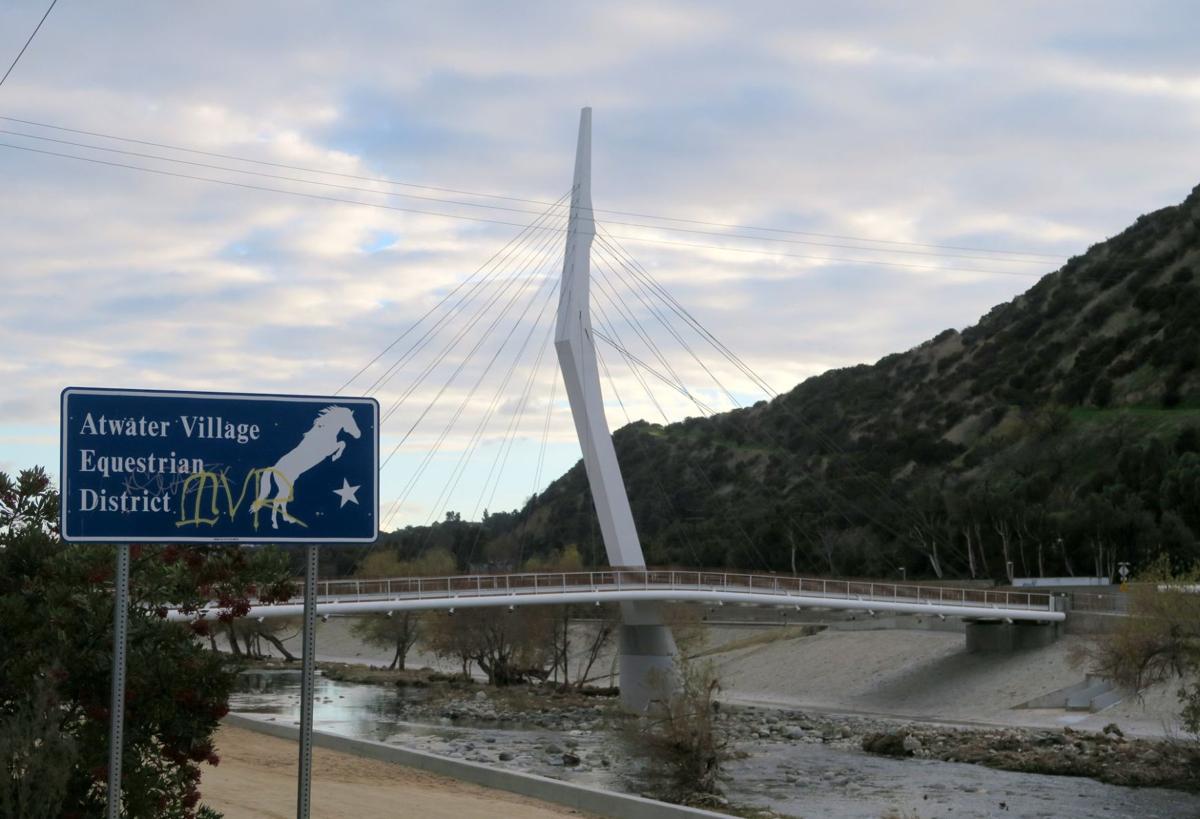 The North Atwater Multi-Modal Bridge was constructed near several horse stables that stretch along the river.

Atwater Village -- The grand opening of a $16 million L.A. River bridge for pedestrians and equestrians has been postponed and the structure fenced off following the death of a horse last week.

The horse apparently died after galloping or sliding off the bridge's eastern entrance and into a concrete wall, according to some accounts. The deadly incident has prompted some area equestrians to call for additional safety measures before the North Atwater Multi-Modal Bridge reopens to horses.

"I don't think [the bridge] should open until this thing is fixed ... so no other animal or person has to go through this again," said Lisa Winckler, one of several equestrians who gathered at the bridge shortly after the incident.

The 300-foot-long cable-stayed bridge is one of three new L.A. River bridges between Atwater Village and Cypress Park that will be off-limits to motor vehicles. Located about a half-mile north of Los Feliz Boulevard, the North Atwater bridge features a 60-foot-high, angled tower -- referred to as a "mast" -- that rises above the river channel and is visible to motorists on the nearby 5 Freeway.

A gap that runs down the middle of the bridge divides the span, with one side serving pedestrians and cyclists and the other catering to equestrians and their horses.

There's still no official account as to how the horse died on the evening of Friday, Jan. 17. Though the bridge had not yet been dedicated, it was already open last week, according to horse owners and joggers interviewed at the river.

Winckler said she was told by those at the scene that two horses being led across the bridge got loose from their handlers after being spooked. Both horses turned around and raced back to the Atwater Village side of the river, where numerous stables are located.

One horse turned right at the end of the bridge and onto a path that leads to the stables. The other horse ran or slipped off the bridge and collided with a low concrete wall, flipping over and falling a few feet onto a passageway that connects the river path above to a bridle trail below, she said.

The animal, described as a pinto gelding, was euthanized after breaking both front legs, Winkler said.

On Tuesday afternoon, a small bouquet of flowers sat on top of the concrete wall. A sign taped to the wall read "Winston" and "We know you are no longer here for you have sprouted wings. Till we meet again. Love You"

The horse appeared to have been frightened by a traffic noise, said Mary Nemick, a spokeswoman for the city's Bureau of Engineering. "However, the city is still looking into the incident, and cannot confirm any details at this time," she said in an email. Nemick did not say whether the traffic noise came from the nearby 5 Freeway.

A grand opening ceremony for the bridge has been postponed until further notice and the bridge will remain off limits for the time being, Nemick said.

"The equestrian side of the bridge will remain closed until our analysis is complete," she said. "The pedestrian side will be reopened soon for use by bikes and people crossing on foot."

The new span is supposed to ensure that equestrians no longer have to ride into the concrete channel and across the river to get to the other side.

Winckler said she would like to see the bridge's rubber flooring extended to cover the concrete pavement at each end of the span, to help prevent horses from sliding and slipping. She also said the bridge's side rails are too low. She and other riders are planning to meet soon to discuss the incident, she said.

$16 million dollars wasted on a poorly thought out, badly designed, eye sore. Sure it connects Atwater to Griffith park if you want go through the tunnel that was rapidly filling with horse poop - and when it reopens for horses, whose job will it be to clean up the horse poop? Plus, you can't cycle through. And why didn't whoever designed the bridge (for that huge amount of money) not know that gravel is no good for horses, or for picking up poop? It's beyond ridiculous.

worst. bridge. ever. huge jagged ugly claw throwing a finger up at the sky...total travesty for all the reasons stated above. tear it down!

It's very sad to know that a horse has already died too recently after the bridge was opened. Even though it's amazing to have a quicker access to Griffith Park, unfortunately I have to agree with one of the earlier comments. This bridge was built by the city not with the equestrian community in mind, rather based on the long speculated condo building proliferation that will be taking place soon. The land where the Dept of Recreation & Parks, City of Los Angeles is located on Chevy Chase Dr. is being planned as to whether it will become condos or an extension of the existing park next to it.

More white people stuff, with all the problems the city has it spends money on a stupid bridge, what about getting rid of the homeless meth tweekers camping on the bike path.

No equestrian requested that the bridge be built. Those who do ride in the park will continue to use the river as has been tradition for nearly a century. Those who didn’t go into the park before still won’t just because there’s a bridge. This bridge will only benefit the homeless, who will undoubtedly set up tents on it at some point and steal from the properties on the East side, and frankly more selfish cyclists who never seem to understand that they must yield to equestrians for the safety of the horse, rider and themselves. This was a $16 million waste of money. If ANYTHING it should have been built 500 feet upriver above the ball field. But of course someone wanted park access for people who eventually buy newly built condos. That horses death is on the hands of the committee who approved this thing and the design firm who didn’t know Jack about horses when it was constructed. For any cyclist reading this: please yield to horses and do not use the no.1 tunnel leading under the 5fwy into the park. You’re going to get someone killed.

This bridge was built for developers who are eyeing the very lucrative riverside location for future condos. That is clear. The equestrian community asked for a much more modest and SAFE bridge. The $12 million cost above the original $4million donation was a travesty and a misuse of public funds, and propelled by greed. Not to mention the design unfortunately is a glaringly ugly large white form against the beautiful mountains and sky, and an egregious example of human arrogance.

Agreed. It's a monstrosity.

Very sad loss indeed. In my opinion, the enhancements to make this safe for equestrian crossings is minimal... higher side rails (actually on both sides - bike, ped and horses), better footing materials on each side of the bridge (not concrete) . It is my understanding that the horse slipped on the pavement part at the end of the bridge. Sound issues may never be resolved. #Justiceforwinston

Even if it was "safe" that horse could have been spooked and ran off by it self as the article said. The same result would have occurred. Riders should have to dismount and walk across the bridge.

There aren’t any problems with the bridge. Even if the neighborhood could convince CalTrans to construct a sound wall, injuries to horses can and will happen again. Maybe the city can move the bridge away from a major interstate highway.

A bridge, huh? And I was wondering what that goofy-looking white tower thing was.

That is so sad. RIP Winston :(

What I find most striking about this bridge is the amount of money and resources the city is willing to spend on an amenity that primarily serves a few wealthy equestrians with access to Griffith. Meanwhile the city drags its heels on every bike lane that’s proposed

I'll ride my bike across it daily when it re-opens.

It will be closed down to cyclists very soon. I predicted this as it was being built

This entire bridge process has been a mess. What started as a $4 million dollar donation somehow turned into $16 million dollar final cost... that we paid for. Would rather see some time and money to work thru the homeless situation.