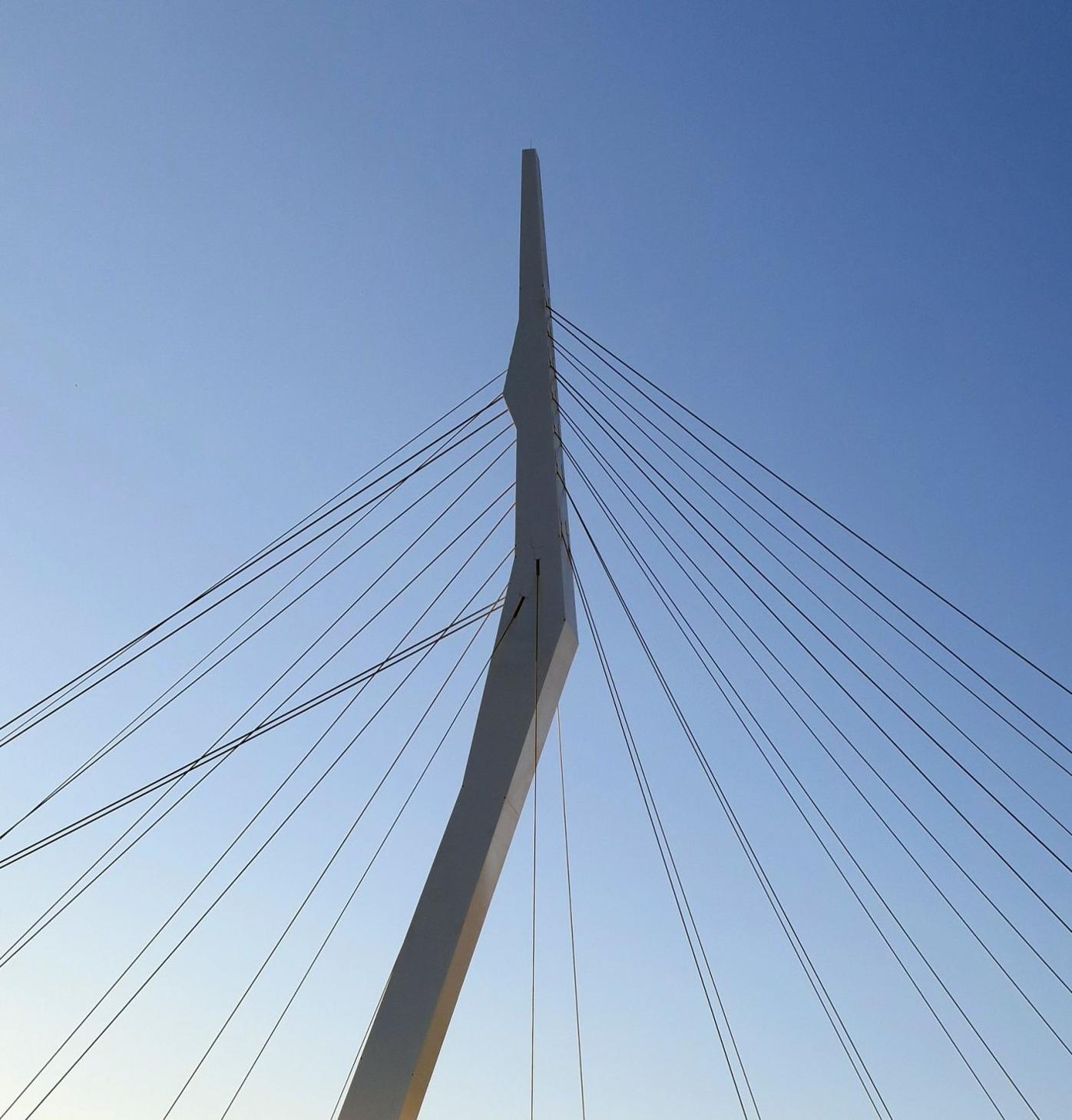 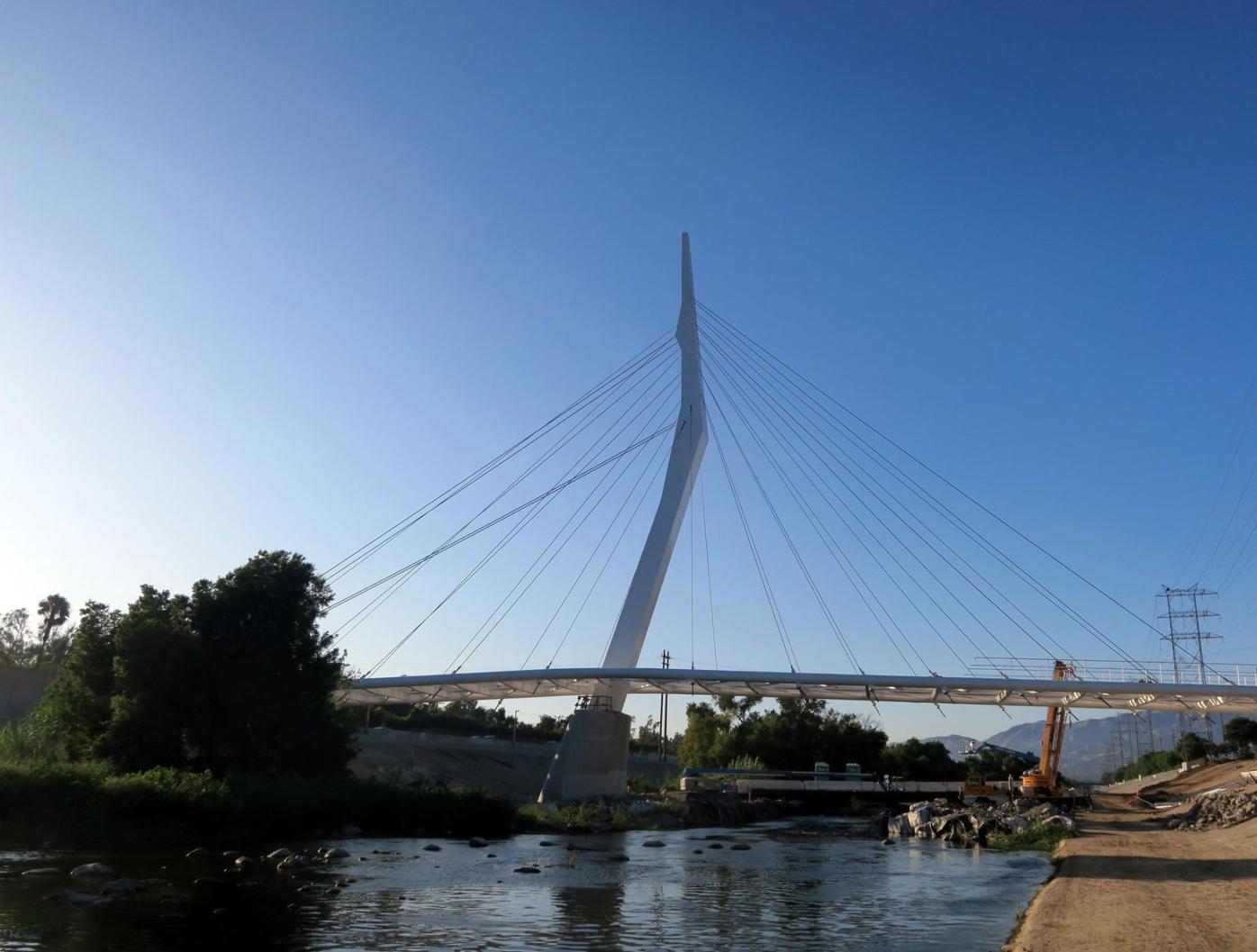 Looking north on the river. The 300-foot-wide bridge is located north of Los Feliz Boulevard. 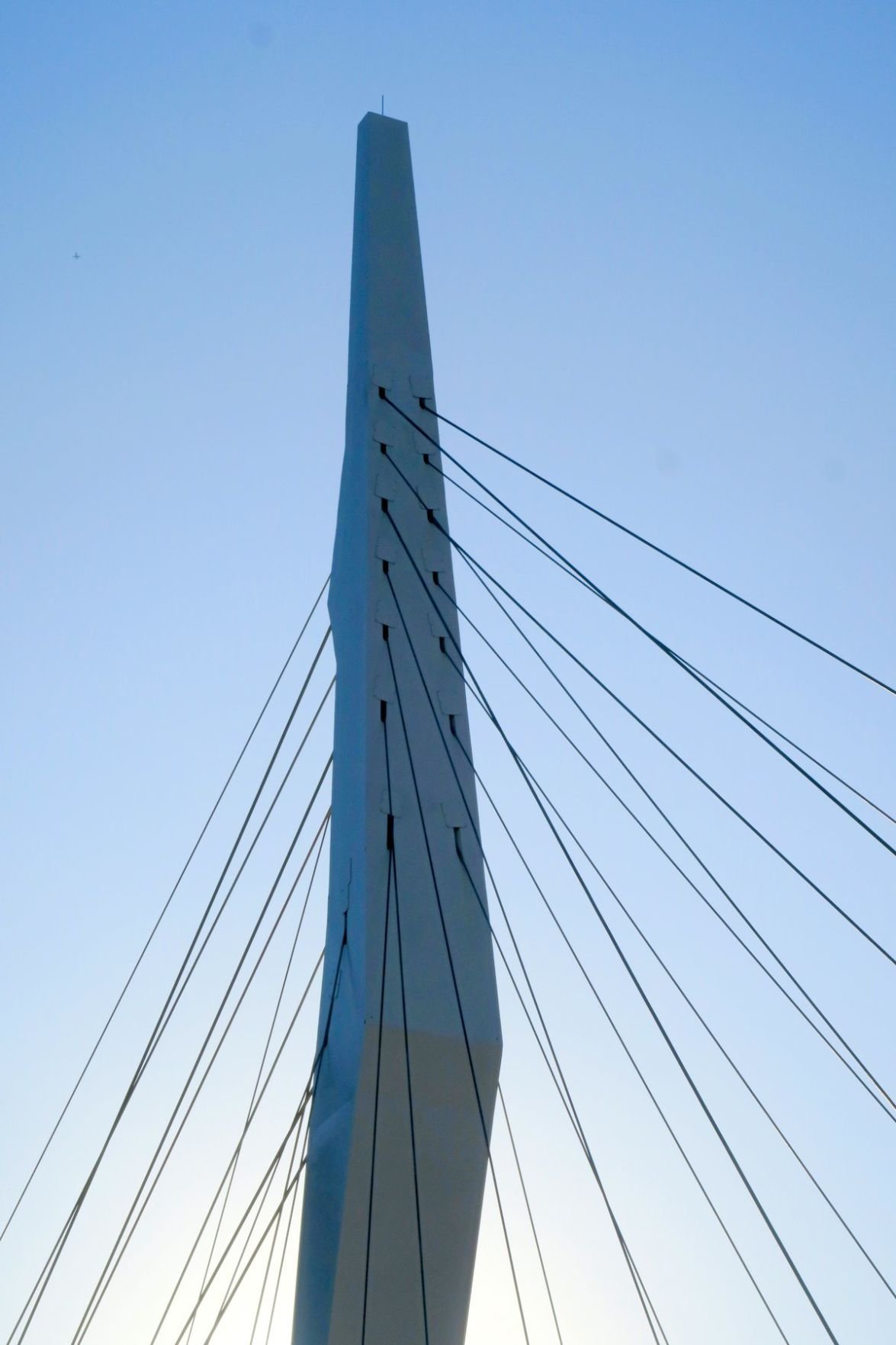 The tip of the bridge's mast. 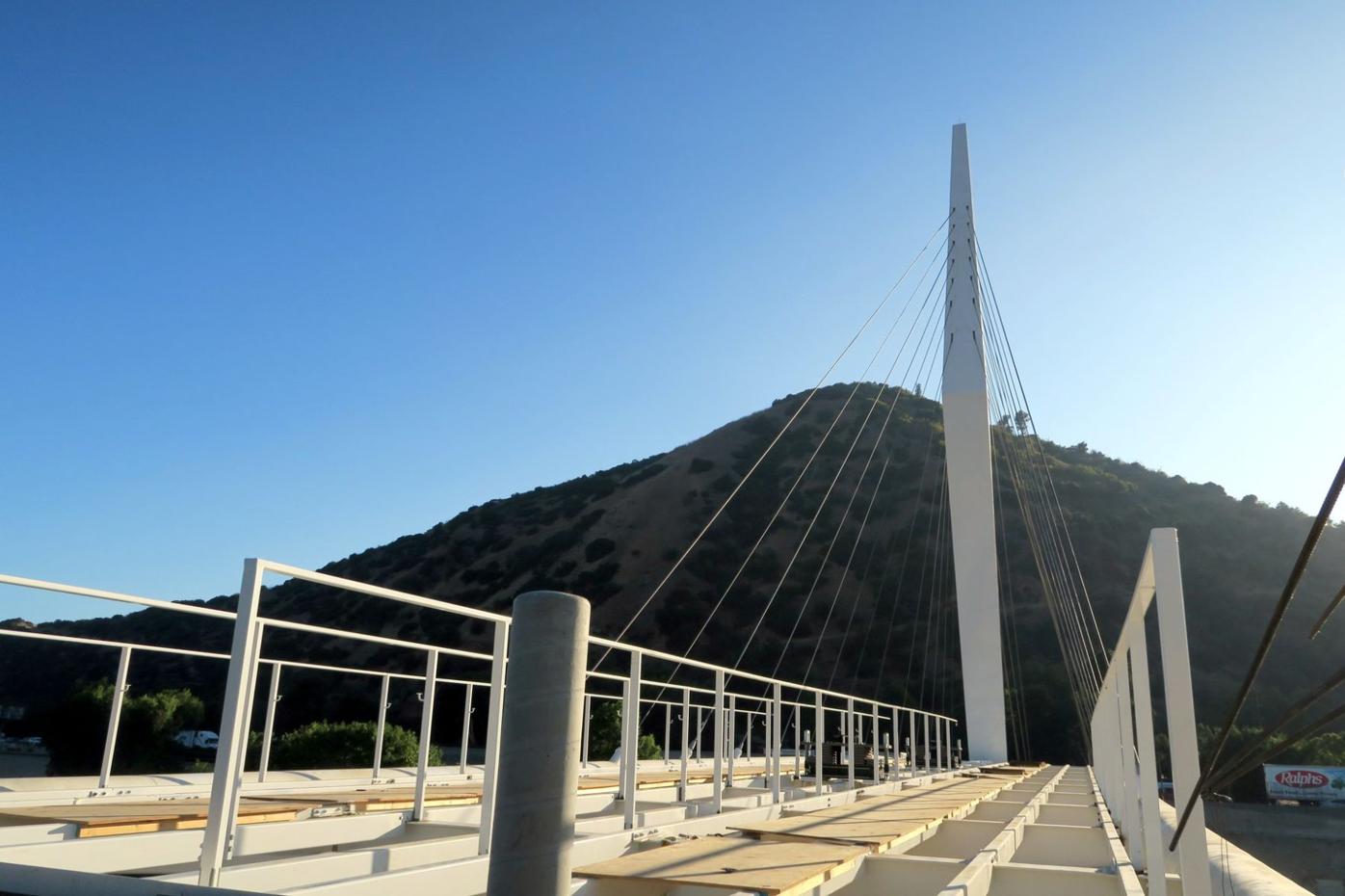 The bridge platform that will be open to pedestrians, cyclists and equestrians. 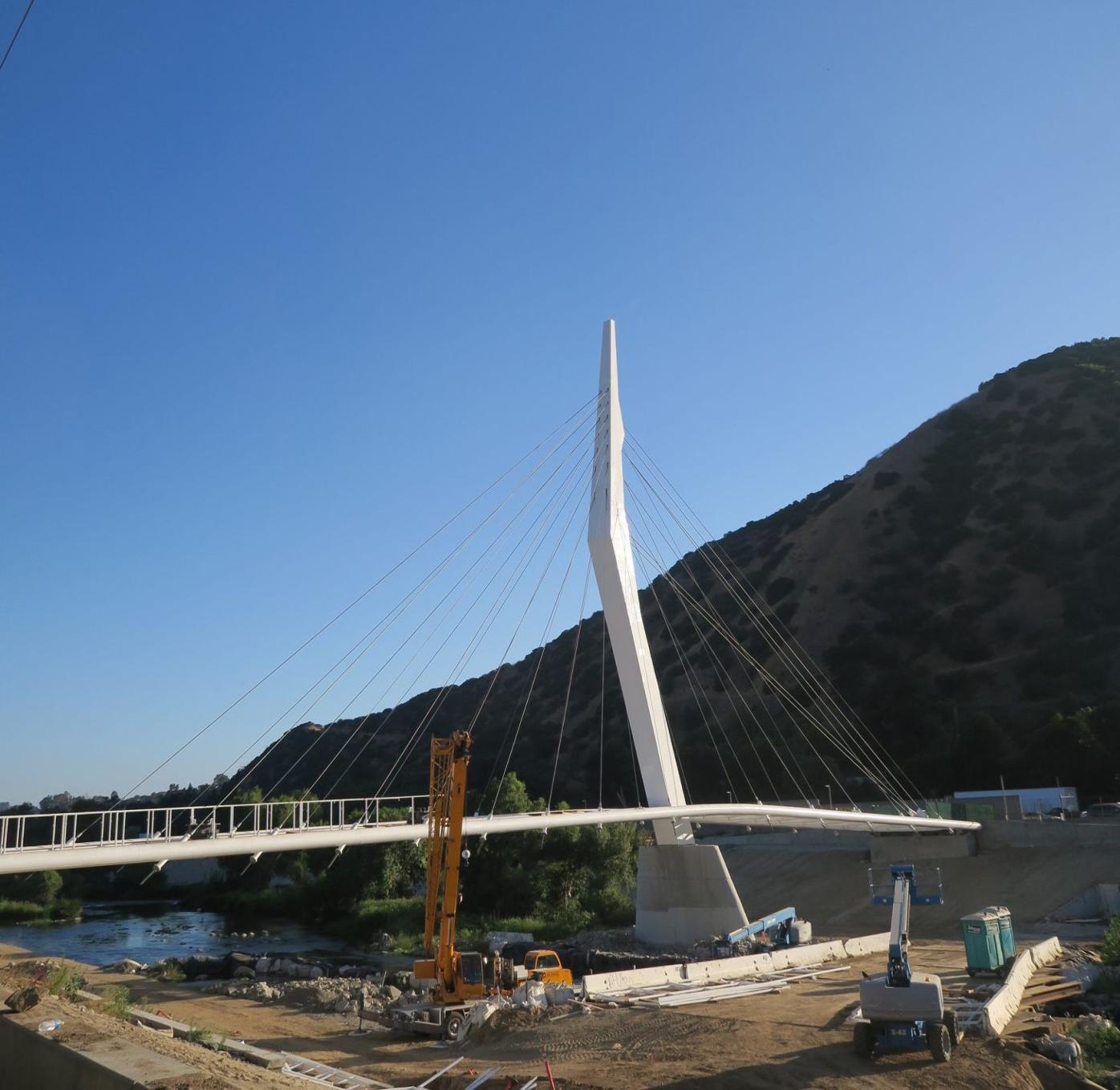 Looking south on the river. The 5 Freeway and the hills of Griffith Park are on the right. 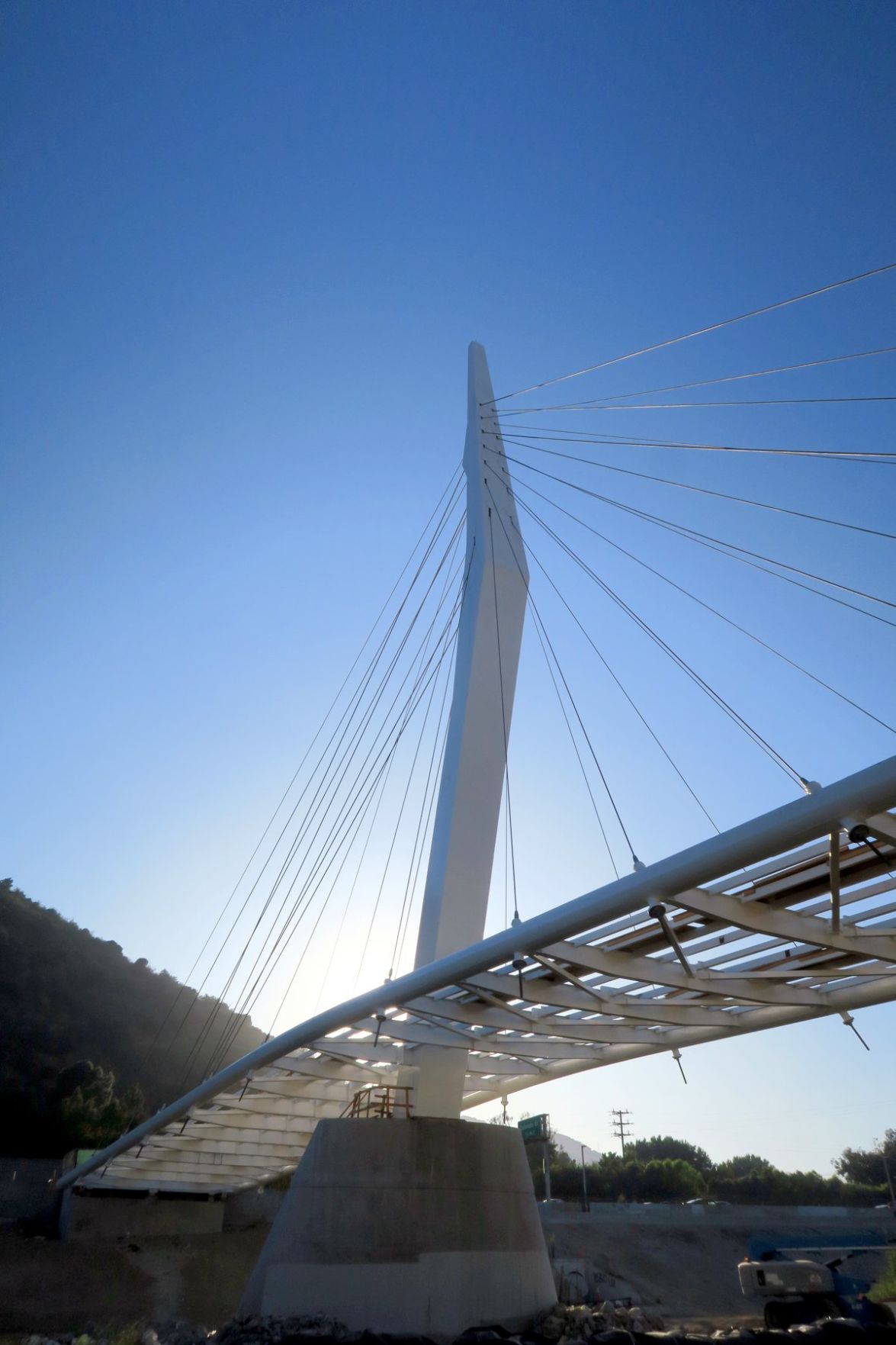 Atwater Village - Construction of the North Atwater Bridge over the L.A. River seems to be moving along. Where once it consisted of just a single, crooked white tower, it now has the bones of a span in place, according to photos in the Daily News and Streetsblog. This includes the 125-foot high "mast" and suspension cables.

The 300-foot-long, cable-stayed bridge is scheduled to be finished later this year. Located about a half-mile north of Los Feliz Boulevard, it is designed to carry pedestrians, cyclists and equestrians -- not motor vehicles -- over the L.A. River.

This bridge was originally supposed to be paid for entirely with private funds and was to be turned over to the city at no cost. But the private funding wasn’t enough to cover it, once the estimated costs of the project tripled.

Landowner and philanthropist Morton La Kretz pledged $4.75 million for the bridge when officials announced plans for the structure in 2011. That was supposed to cover most of the bridge’s cost. However, the most recent estimates indicate that the bridge will cost more than $16 million, leaving taxpayers to pay for the rest.

I think the bridge looks fantastic! This bike/ped bridge was sorely needed, especially with the tunnel connection to Griffith Park right there on the west side and an opportunity to improve the path on the east side of the river.

These are the kinds of projects that can start to recover our City's natural beauty after we scarred it with massive freeways and car roads at every square inch. There's no reason the LA River could not return to being a wonderful place for people to be.

$16 million for a small pedestrian/bike bridge? What is it made of, platinum silver and gold?

Gosh this bridge is an eyesore. Looks like a giant middle finger when driving down i5 and the amount of cables are just messy looking.

I agree with heedmoses, very ugly. The bridge has zero relation to the area .