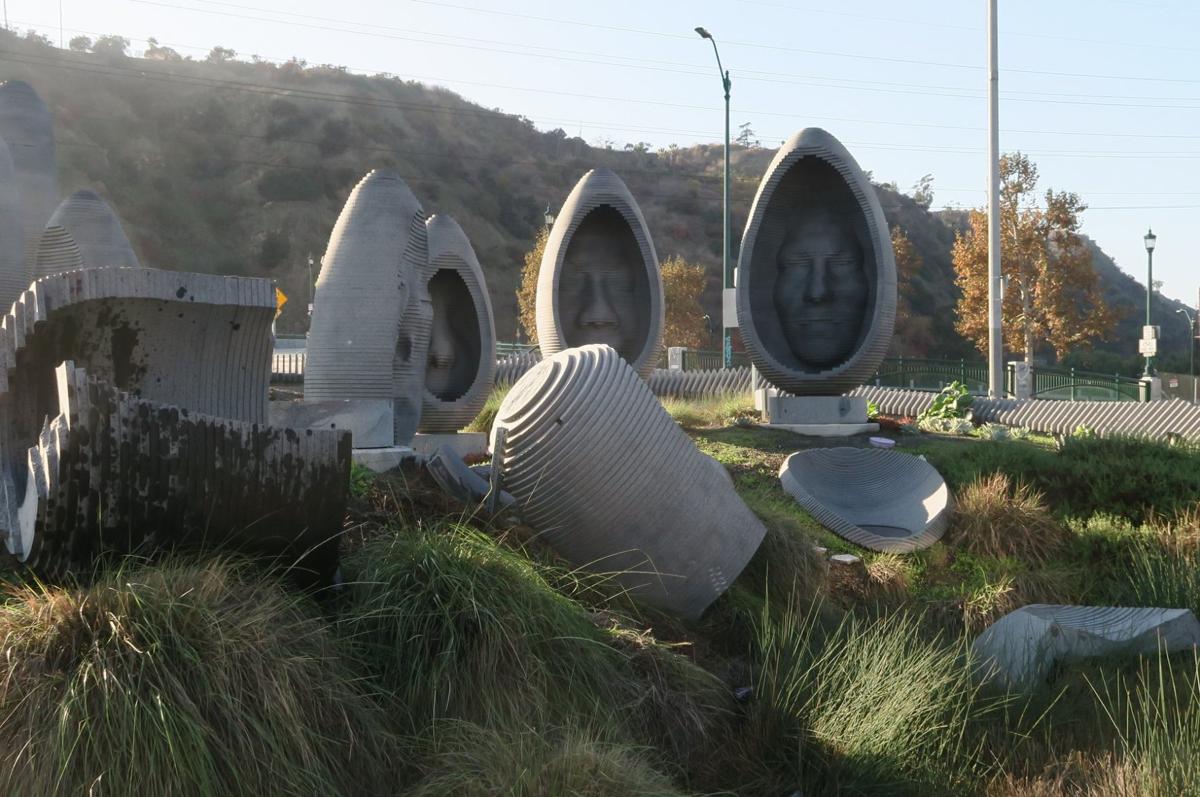 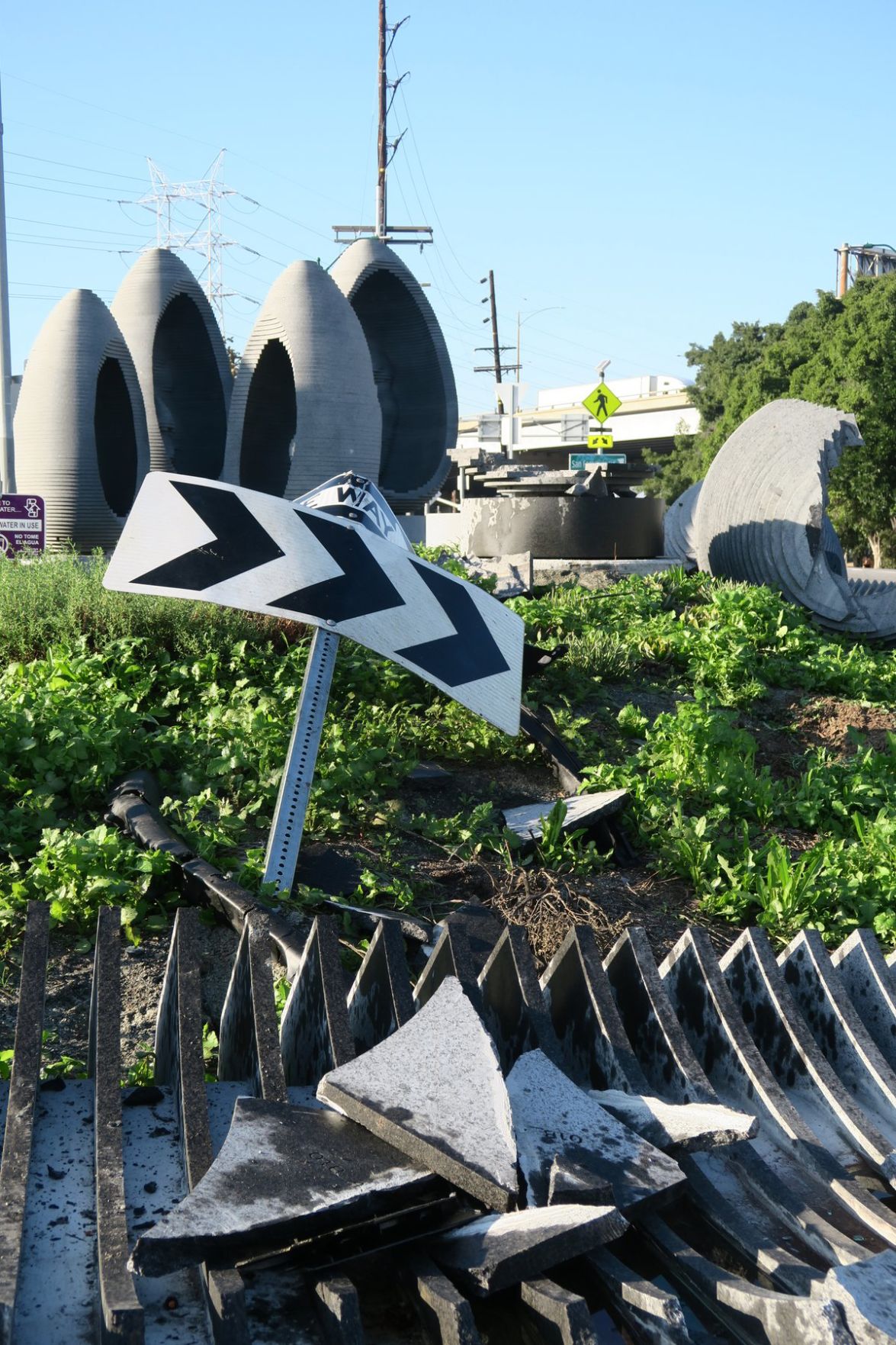 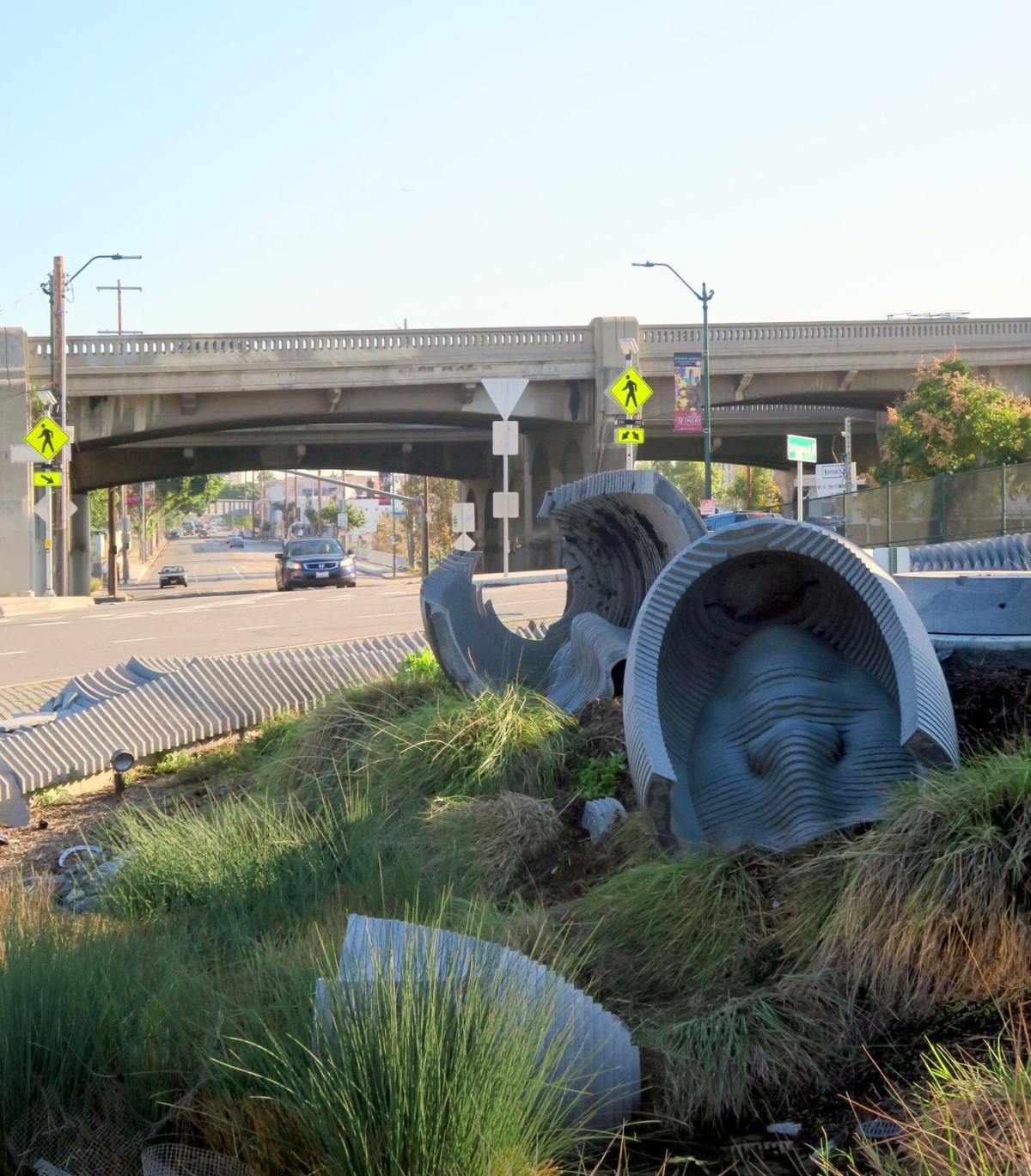 Cypress Park -- Some of the egg-shaped sculptures installed in the center of the Riverside Roundabout have been knocked over and damaged, apparently from a vehicle crash.

A video on Facebook and photos of the damaged public artwork started popping up on social media over the weekend. An Eastsider tipster said he drove by at about 12:40 am on Sunday when he saw a 4-door, beige-colored Mini Cooper that had crashed into the roundabout, leaving the vehicle with extensive damage on the front side and almost all of the windows were broken. That account, however, has not been confirmed with police.

"Faces of Elysian Valley" (which has also been dubbed the "Egghead Stonehenge") consists of nine stone sculptures, ranging from 8- to 12-feet in height, according to Greenmeme, the Cypress Park-based art studio of Freyja Bardell and Brian Howe.

A large opening on the side of the egg-shaped pieces reveals the face of a person selected at random from the community. 3D scans of the faces were used to cut the stone.

The artwork sits in the center of the 100-foot-wide roundabout, located near the north end of the new Riverside-Figueroa bridge. It's landscaped with plants found in the Los Angeles River and store stormwater runoff in an underground, 25,000 gallon cistern.

Public Art Director Felicia Filer said the Cultural Affairs Department is seeking a police report as it prepares to file an insurance claim to cover the cost of repairs. The artist will be asked to fabricate any damaged portion of the work.

"The city and the artist will work together to make repairs to the damaged artwork," Filer said in an email.

But it will take awhile before repairs can start since processing an insurance claim can take about four months, she said.

So will the driver who damaged public property be responsible for the cost of replacing the sculpture they damaged? Hopefully...

Maybe the aliens hatched. Maybe the mothership will take those alien eggs back to their planet.

It’s absolutely unfortunate that this thought-provoking sculpture has had so much bad luck, from the broken fountain portion to now part of the sculpture itself having been broken! Very disappointing, indeed!