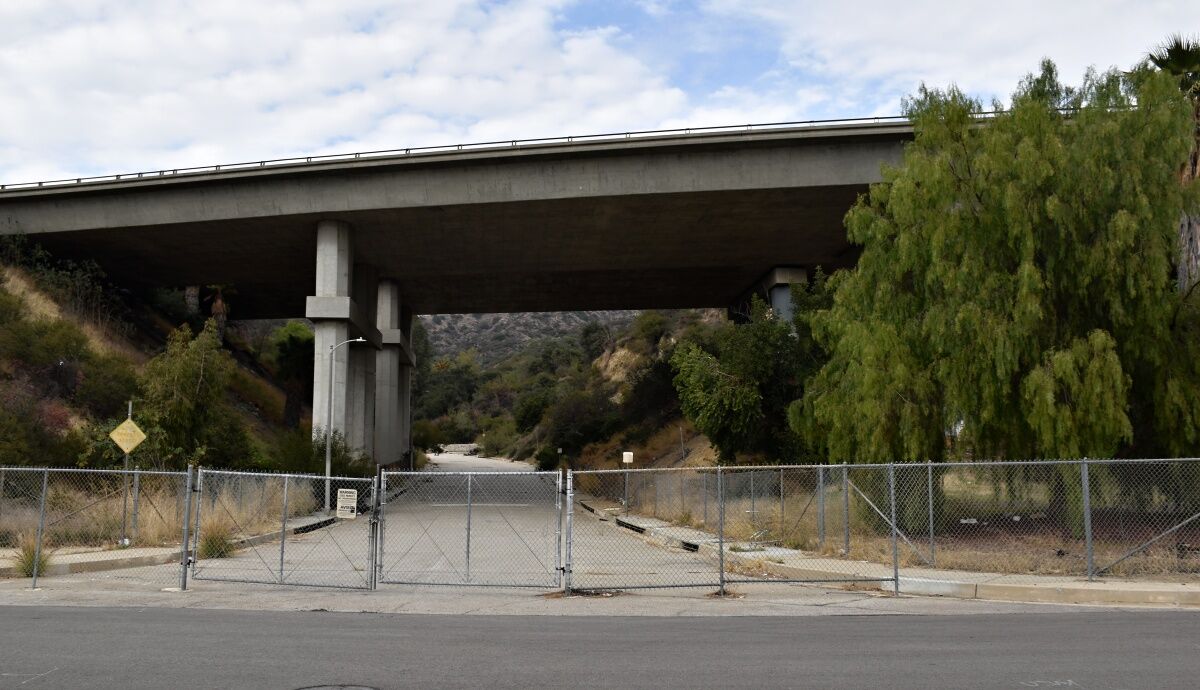 In this part of Eagle Rock, however, how it will cross the 134 freeway to the open spaces remains to be seen. There are few underpasses; a possible bear escape is in Eastern Eagle Rock at the site of former houses that were levered for the freeway near Arbor Dell and Blue Hill. PHOTO: Brenda Rees 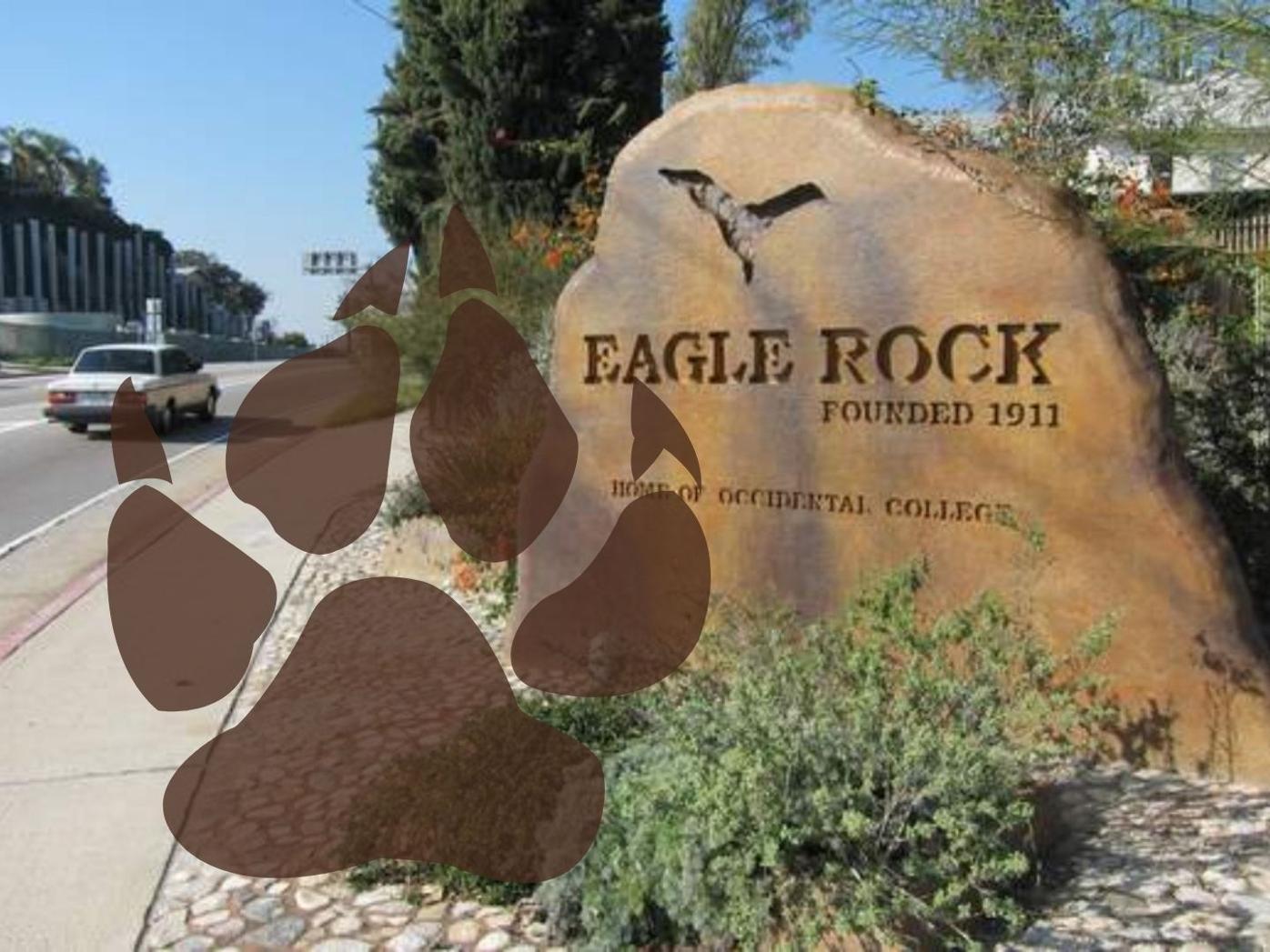 "Where is the bear?"

Eagle Rock --That’s what everyone in Eagle Rock – well, those who live north of Colorado Boulevard – are asking these days. The famed ursine made its first appearance on March 2 and was reported again on March 7.

Maybe a more important question is how can residents help this California black bear get back to its natural habitat – whether it traversed from the Verdugo Mountains, Eaton Canyon or the Angeles Forest? Whatever pine tree landscape it came from, the bear appears to have found plenty of food and may prove tricky to extricate from the neighborhood.

“At this point, we’re on standby with this bear,” says Tim Daly, the PIO for the California Department of Fish and Wildlife. As seen in the KTLA video, the bear has been clipped with a yellow tag which means the department has previously tagged this bear. “Without being able to get closer, or capture, [we are] not sure when or where the tagging occurred,” explains Daly.

Explaining that the department “doesn’t have the staff to go looking or posting in the area,” Daly adds that “We’ll respond accordingly if there’s another sighting.”

Responding accordingly usually means either hazing the bear – making loud noises – to get the bear to leave the area on its own. Darting and relocating a bear is done on a “case by case” scenario says Daly. Tranquilizing a wild animal can be problematic; in 2015, when a mountain lion made its way into a Temecula mall, officials inadvertently shot a dart into its lungs which eventually killed it.  No one wants to see that with the now legendary Eagle Rock bear.

The best thing for residents to do to help the bear is to roll up the welcome mat and put an end to the Bear Buffet.

Vicky Kraft has been coexisting with bears for the 11 years she’s lived at Pine Mountain Club (PMC), an unincorporated community in southeast Kern County. She’s a spokesperson for Los Padres Bear Aware that educates residents about living responsibly in bear habitat.

Eagle Rock residents don’t have a bear problem, but a “people problem” aka, leaving out (maybe inadvertently) too much bear-friendly food, Kraft said. “Once a bear sees and knows a food source is readily available, it can only get worse.”

Bears are smart, said Kraft, and know when trash day is so she advises residents to not put out cans the night before (when bears are active), but rather first thing in the morning.

“Pull all your bird feeders – seed and nectar – away and don’t leave pet food outside," Kraft said. "Make sure to empty the grease trap in barbecue grills. We’ve seen bears knock over grills to get to that trap.”

And if Amazon is delivering Chewy pet treats or human food products, don’t leave the box on the porch, she adds.

Finally, don’t forget cars as a source of food. Lock your cars (Kraft has seen videos of bears opening car doors with their mouths or paws) and remove all scented items, like pet treats, diaper wipes, etc.

Kraft tells the story of a woman in PMC who went to a Yankee Candle party, bought Christmas cookie scented candles and shoved them under the seat of her SUV. That night, a bear caused about $36,000 in damages. “It was trying to find the cookies,” she sums up.

Kraft and her fellow volunteers are in constant odds with bear feeders, people with soft-hearts who believe they are doing good by leaving food out for wild animals. They fill up kiddie pools of water, pouring piles of dry dog food, and even putting dog biscuits in mail boxes to entice bears.

If the bear gets hungry enough, it should move on, said Kraft.

How will it end?

In this part of Eagle Rock, however, how a hungry bear will cross the 134 Freeway to the open spaces to the north remains to be seen. Barring a dash across the multi-laned freeway (there are few underpasses), a possible bear escape route is at the site of former houses that were leveled for the freeway near Arbor Dell and Blue Hill.

Let’s all hope the bear decides to ends its vacation in Eagle Rock and head back to its rightful home – just in time for all the great Eagle Rock Bear merchandise to hit the streets and more clever tweets from the official Eagle Rock Bear.