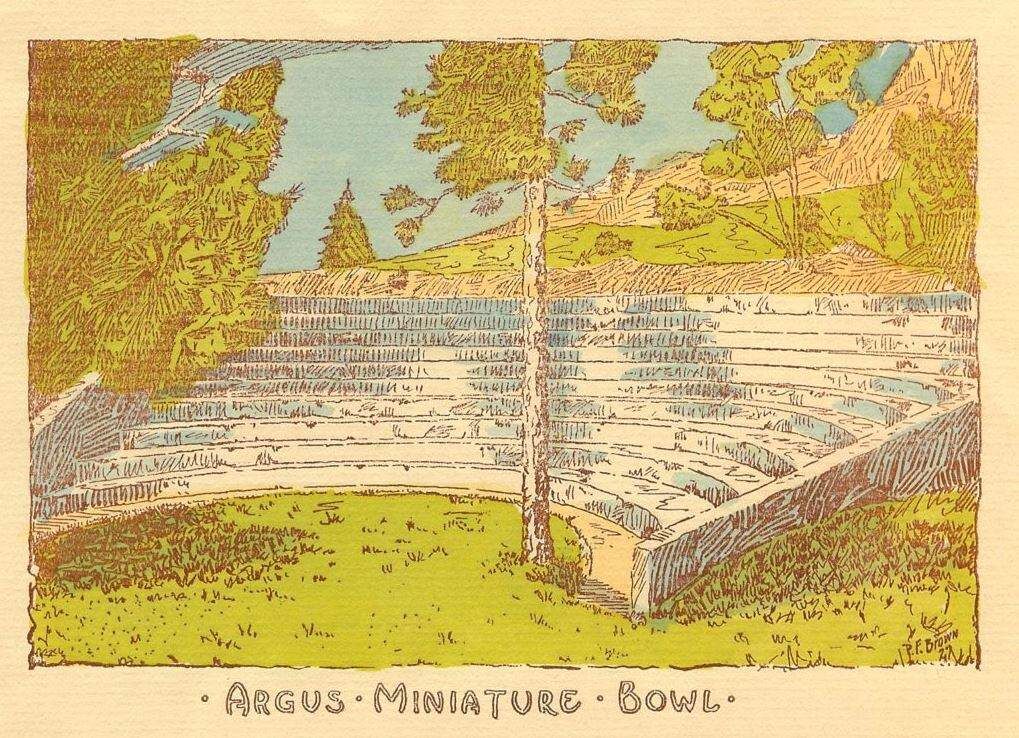 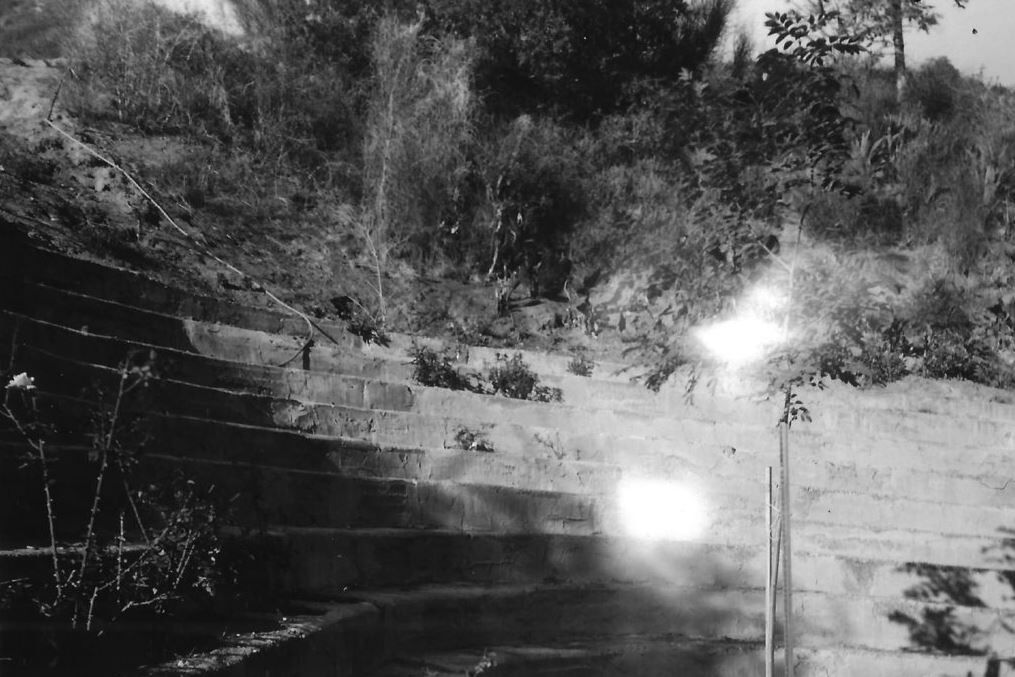 The Argus Bowl pictured in 1961. The property was later subdivided for other homes.

Caerthan Banks is a screenwriter who lives in Eagle Rock. You can follow her on Instagram at @Caerthan.

Close your eyes and imagine a time in Eagle Rock a little over a century ago. A global pandemic had been over for six years and the Roaring '20s were in full swing. The air was clear and free of smoke and smog. You could buy a house in Eagle Rock for about $4,000.

Now imagine 13 acres of pristine land, north of Hill Drive, way before the 134 Freeway came into existence. Nestled into these hills along Argus Drive was the Argus Estate, where Mr. and Mrs. J.E. Argus built their home and lush gardens. According to the Eagle Rock Advertiser in 1928, “The Argus Gardens is the place for the meeting of peoples to become better acquainted, to encourage art, music and drama, and to provide a setting for the aiding of worthy institutions.”

Most intriguing to me, the Arguses constructed an outdoor amphitheater, modeled after the Hollywood Bowl, with a seating capacity of 500. Some sources say the bowl was actually built by the previous property owner, Mr. Loomis. The Argus Miniature Bowl, where concerts and plays and dances and weddings and parties (all free!), put Eagle Rock on the map, according to another piece in the Eagle Rock Advertiser.

A story in the Los Angeles Times (September 21,1930) describes the grounds in meticulous detail:

“Flaming hibiscus trees line either side of the drive, with sloping lawns and trees, shrubs and flowers of every variety. If a visitor to the bowl is in an exploring mood as he winds his way from the entrance, he will find a Wishing Well on which is inscribed “Wishes Made Here Come True,” which somehow one takes literally; a lotus pool with a Japanese footbridge and numerous goldfish; a gorgeous pheasant in a large, roomy coop; brilliant wooden birds and lifelike wooden bulldogs that do all but bark, adding gaiety to garden and lawns; a rambling home of twelve rooms with seven gables ... a fountain with water mysteriously falling from a miniature cliff …”

While the grounds indeed sound almost otherworldly, it was the performances that made this place so revolutionary. The Eagle Rock Advertiser stated that “artists of international reputation, musicians who have reached the height of their profession” were among those to grace the stage. World renowned Japanese choreographer Michio Ito brought his famous dance troupe to the amphitheatre, and the performance was described in Helen Caldwell’s book “Michio Ito: A Man and His Dances.”

It was said that in the year 1928 there were over 35,000 visitors to the Bowl. Performers also included modern dance pioneers Ruth Saint Denis and Ted Shawn.

In September of 1931, world famous soprano Ellen Beach Yaw led a performance of Hamlet at the Bowl. The Eagle Rock Advertiser noted that “When she saw the Argus Bowl for the first time she was charmed with the setting, saying it was reminiscent of similar places in Italy”.

One of the biggest events to take place at the Argus Bowl was a huge reception for the 1932 Olympics, which were held in Los Angeles that year. According to a piece in the Boulevard Sentinel, guests were “distinguished people from all over the world … The reception is registered in the official program of the Olympic Events and will linger long in the memories of noted guests. The Argus Gardens are famous throughout the whole country...”

Also of great interest to me is Mrs. J.E. Argus, who was a formidable patron of the arts and was adamant that the performances at the bowl were always free of charge. She was quoted in the Los Angeles Times as saying that “... when I built it, I had no idea that 35,000 people would attend it in one year. You know, I believe that the most worthwhile charity is giving people a chance to help themselves.” She believed “art was as necessary as bread.”

There is so little information about this fascinating slice of time and place, which has completely captured my imagination for so many reasons. Why did the hugely successful bowl suddenly shut down? After the Olympics event of 1932, the performances stopped. A rare photo and caption from the book “Images of America - Eagle Rock” says that parking became impractical. It was noted that Mrs. Argus became ill and died in 1932 and that the spirit of the Bowl disappeared with her.

Or maybe it was the Great Depression. Was the amphitheater bulldozed or is it buried? Is it still up there at the top of Argus Drive, covered with shrubs and straggly Eucalyptus trees? As an artist who lives in Eagle Rock, I am captivated by this short-lived venue which was devoted to music, dance and theatre, spearheaded by a woman who wanted to make a difference in her community. And as a history buff, I’m fascinated by this period in time when amphitheaters played such an important role in the sustainability of the performing arts.

But most of all, I am intrigued because I think my house was built at the base of the Argus Bowl. The two photographs I have of the venue display a view that is precisely my view. The skyline and the shape of the hills remain unchanged, and if you squint, you can almost unsee the 134 Freeway.

Maybe not. But definitely maybe. I like to imagine the artists performing under the stars a century ago in the very place I call home.

Sunday Story showcases first-person essays as well as fiction by residents. We welcome submissions, but stories must be set in one of the neighborhoods we cover.