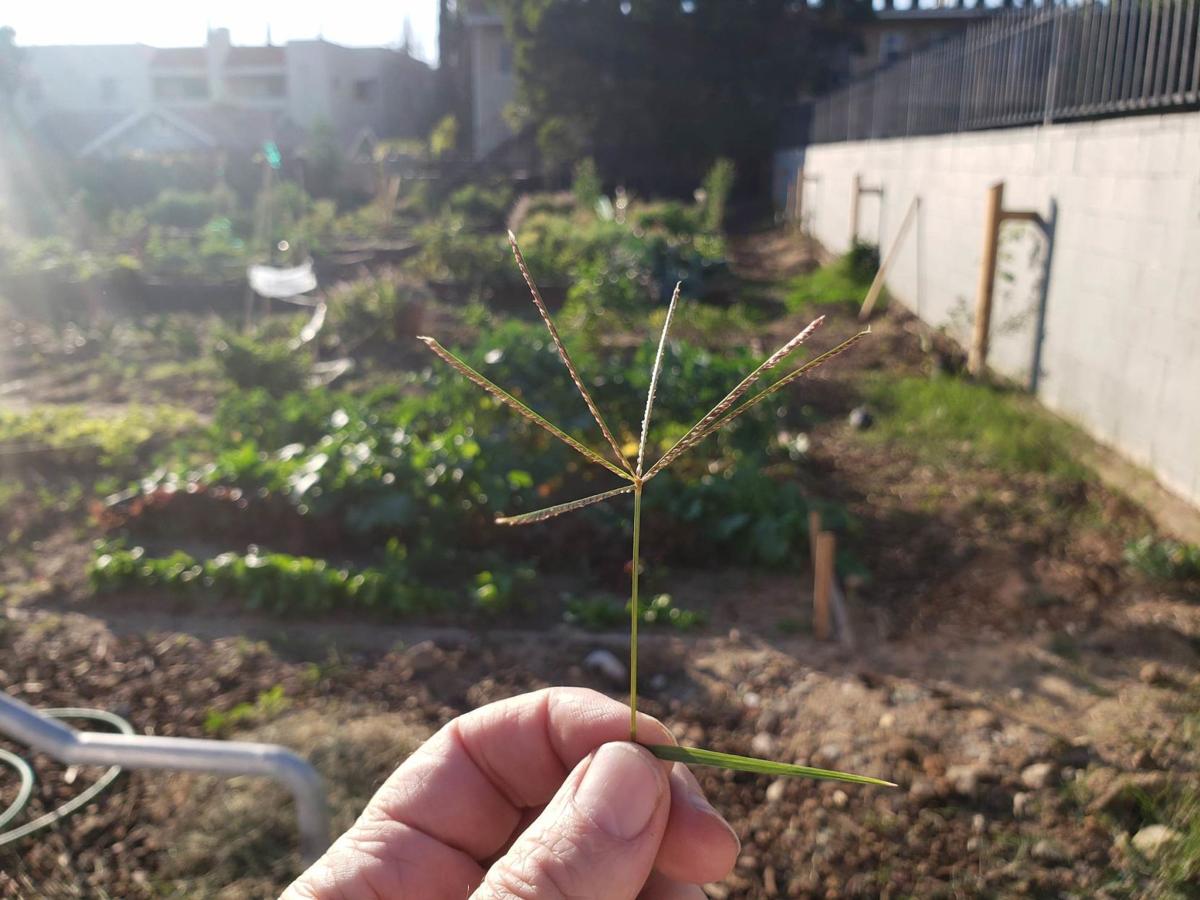 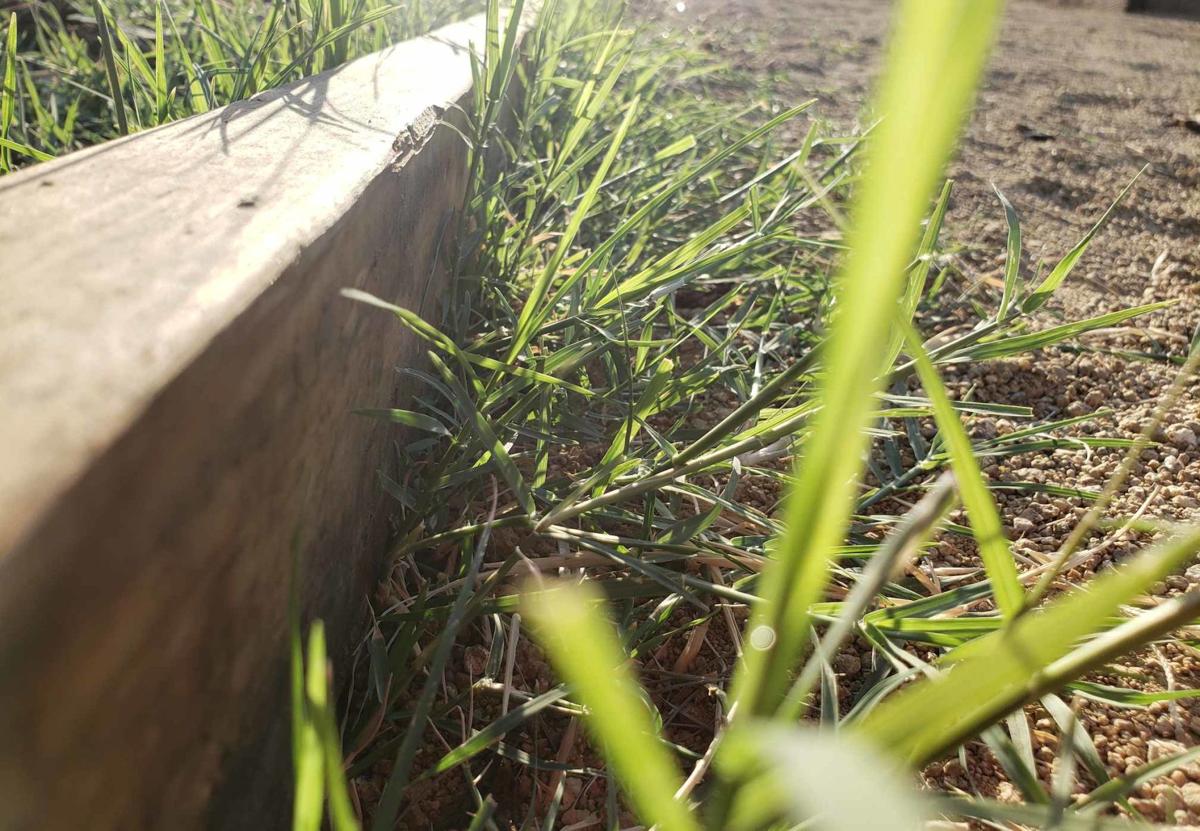 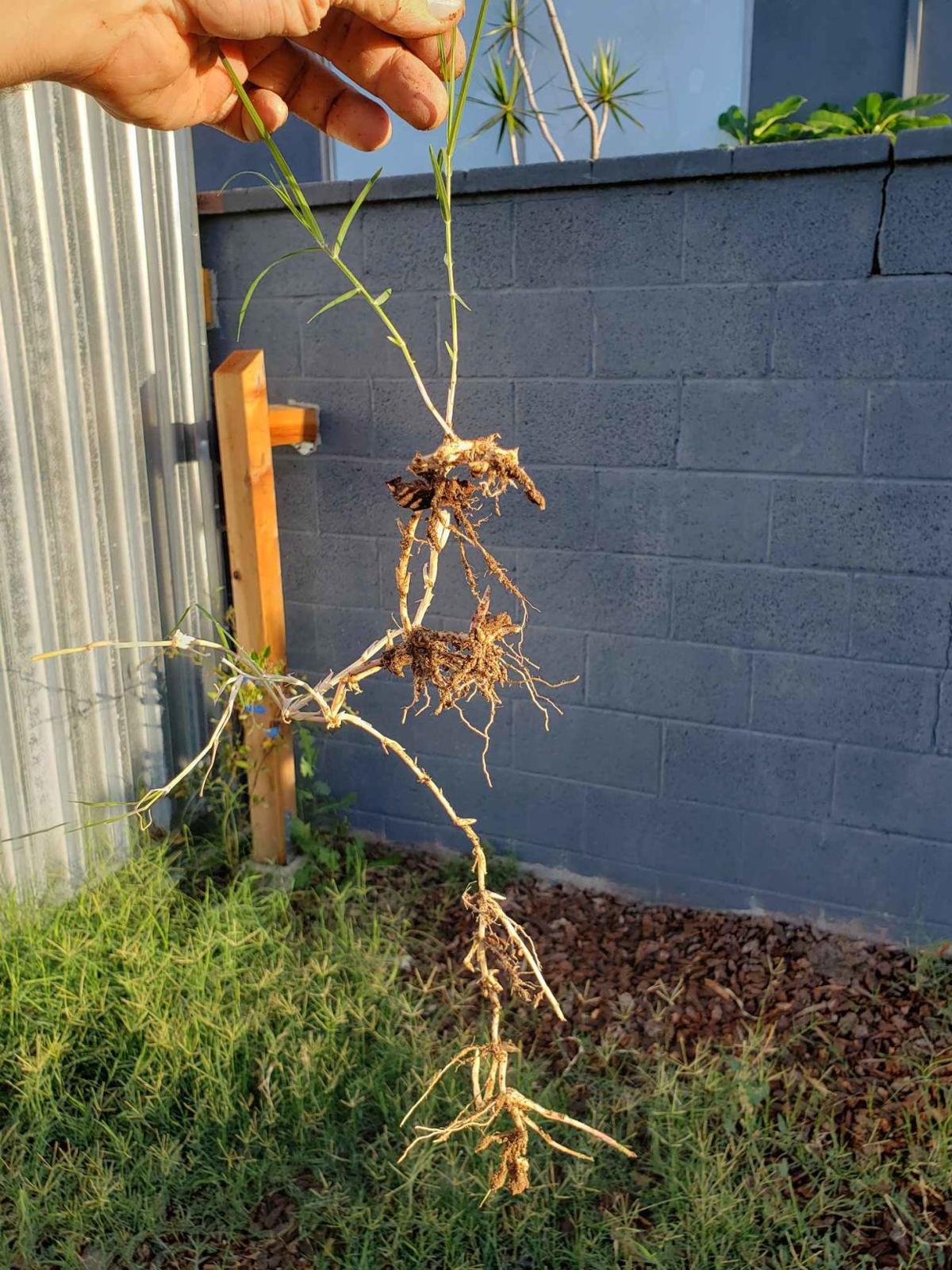 A crabgrass plant, with as much of the root as I could get. 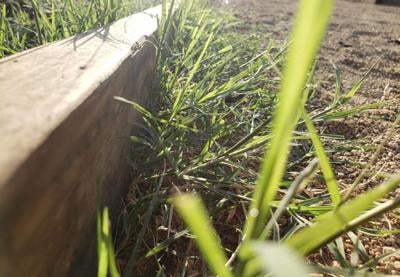 The writer is a member of the East Hollywood Community Garden, which began over the summer. Since joining, he has planted a lot of things that have died.

East Hollywood - I guess I've known this weed all my life. It peeks through cement in the sidewalk. It grows through walls. It takes root in hard clods of near-stone 10 inches underground. It's the life that takes over an empty lot when nothing else is happening there. It is more native to Los Angeles than any of us will ever be, and most of us go to war with it as soon as we acquire land.

One guy in our community garden - tall fellow, I didn’t catch his name - said he managed to pull up a crabgrass root that ran from one end of his 12-foot dirt bed to the other. You can do that when the soil is still wet - just pull it up like the perforated tab on a box of pasta.

But with dry soil? Louise, our president at the East Hollywood Community Garden, told me, “every time I embark on a crabgrass yanking session, I'm convinced that the roots are held onto by the Demogorgon from the Upside Down from ‘Stranger Things.’”

Yanking up the roots can be such a giant pain that one of our gardener meetings briefly went off the rails as we debated whether you really had to pull the crabgrass out by the roots, or whether it was enough just to clip the greenery on the surface.

Turns out, that depends on whether you want to do a lot of work early on, or a lot of work for the rest of the year. But we’ll get back to that in a moment.

First, what exactly is crabgrass? It’s found in all parts of the world that are warm and get at least some rain. Two subspecies of it are particularly common in our area: Digitaria sanguinalis (hairy crabgrass) and Digitaria ischaemum (smooth crabgrass), according to Gretchen North, a professor of biology at Occidental College.

So if you don’t pull up all the roots, will this plant regrow? Oh heck yeah, Prof. North said.

“You do have to pull it out by the roots during the growing season,” she said, “because it will regrow new leaves, but only until cold weather sets in.”

On the other hand, if you’re lazy, you could just wait for the cold weather to kill off the leaves instead.

“The plant is genetically programmed to grow for one season, which for crabgrass is less than a year,” Prof. North said. “The roots don't really die due to cold -- they just decompose after the shoot dies back. It's the shoot that can't really handle cooler temperatures, because the leaves in C4 grasses have a fairly high temperature optimum for photosynthesis.”

That’s only if the weather gets cold enough, though. “It's pretty warm in the winter these days,” Prof. North said.

Either way, what you're really trying to prevent is the spread of seeds. On that note, gaze here upon the face of pure evil - if you dare:

I once mistakenly told a fellow gardeners this was the flower of crabgrass. But instead it's the inflorescence, which is even worse.

“It's actually a cluster or branched head of many small flowers (called florets),” Prof. North said.

Which is to say, even the flowers are microscopic. So imagine how small the seeds can be. According to the Pennington Seed company, among others, a single crabgrass plant can produce up to 150,000 seeds in that single season of life.

And in Southern California, crabgrass tends to flower in late July and August, according to the University of California’s page on integrated pest management. So by the time our community garden first started meeting and even talking about this problem in August of 2019, it was too late. Next year’s seeds were already flying in the wind and even getting getting in our eyes, as we made our great plans for stopping them.

But as we debate how to kill crabgrass, another question rarely seems to arise: Why kill it at all?

By all accounts, this plant is not particularly harmful. Even though the roots seem strong enough to make rope, they supposedly don't strangle other plants. In fact, some people grow crabgrass on purpose. You can feed it to livestock - which I don’t have. Or you can gather the seeds - which I’m not going to do - and make beer - which I’m also not going to do.

But if you otherwise think this is just a useless and unattractive weed - especially when clumps of live crabgrass grow over layer of its dried, yellow, dead ancestors - you can just yank it out of the ground, preferably in the rainy season, while it’s still easy.

Anyway, that’s what we’ve been doing.