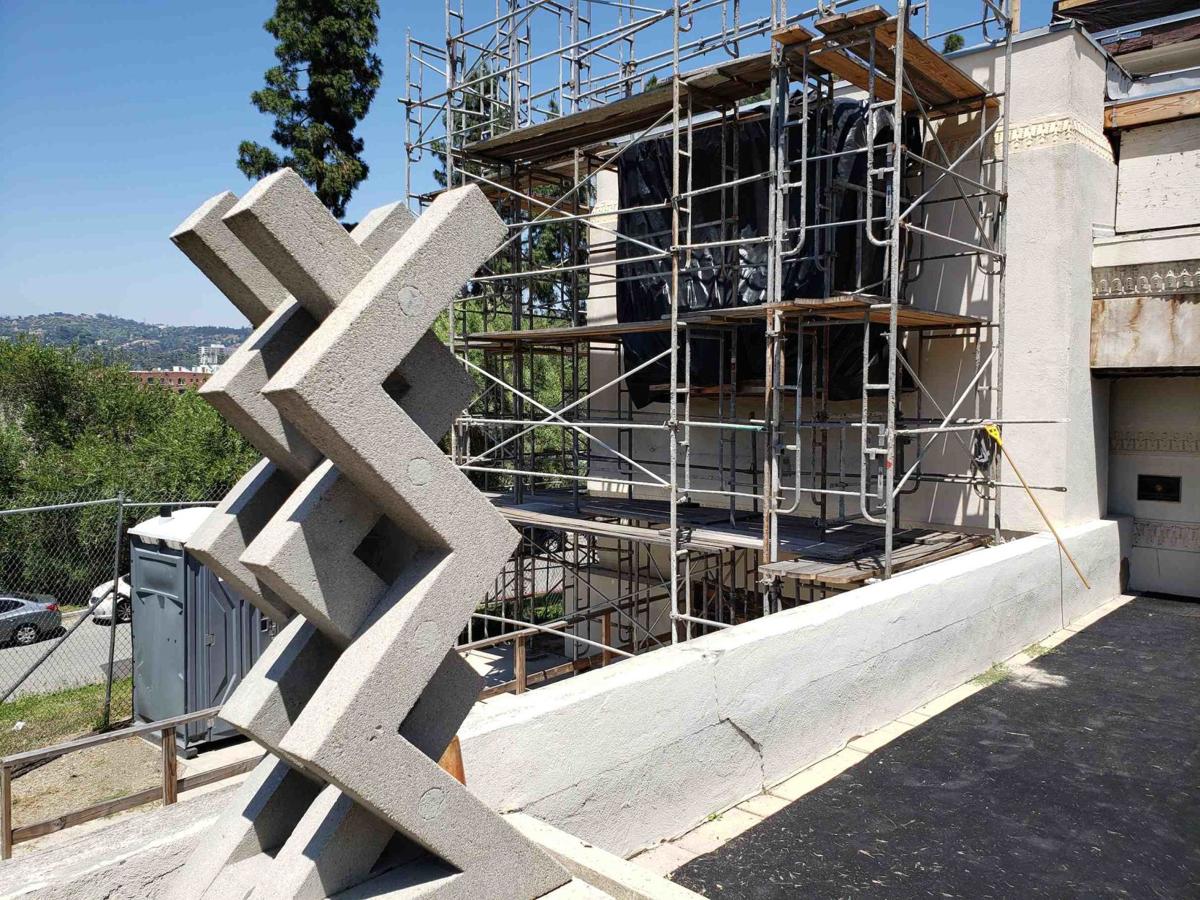 Scaffolding around the western bay window of Residence A, Barnsdall Park. 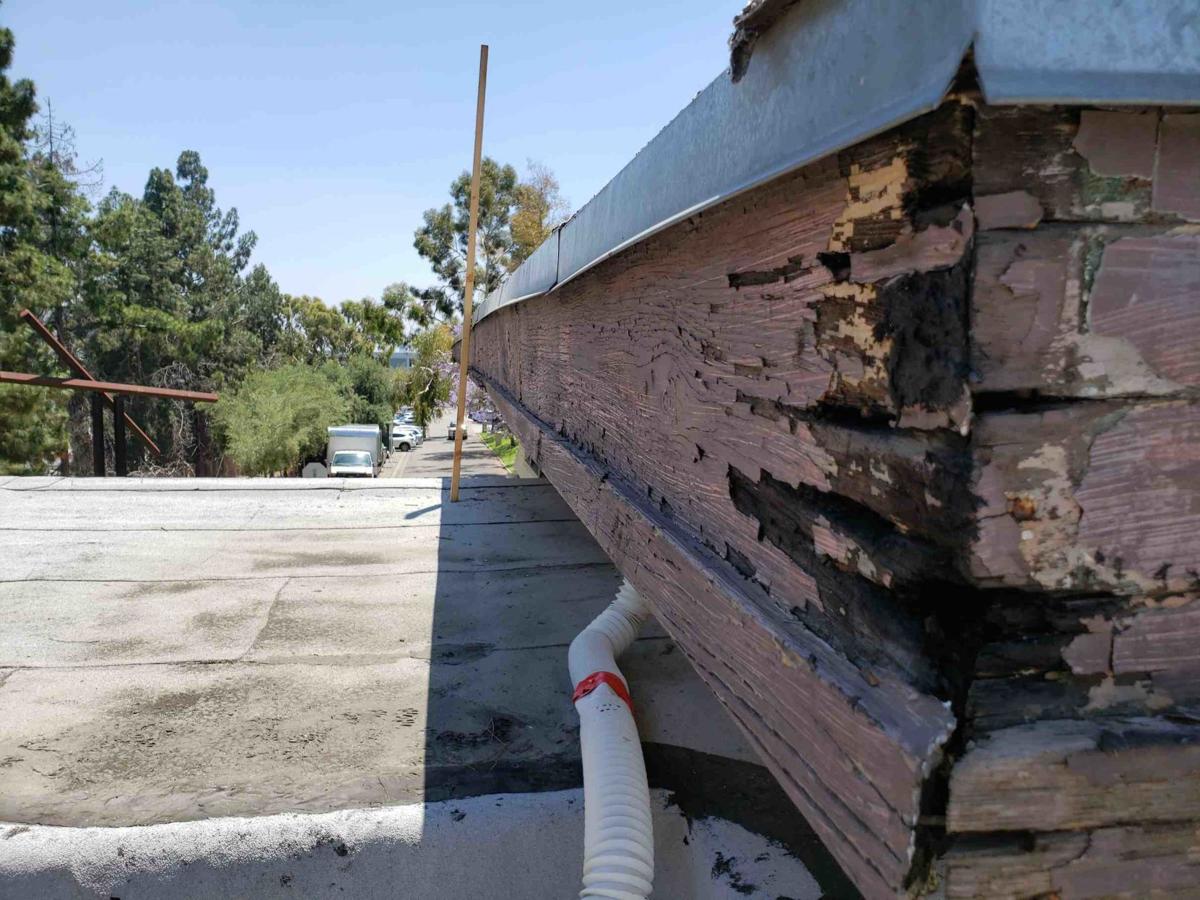 Roof beam in need of repair. 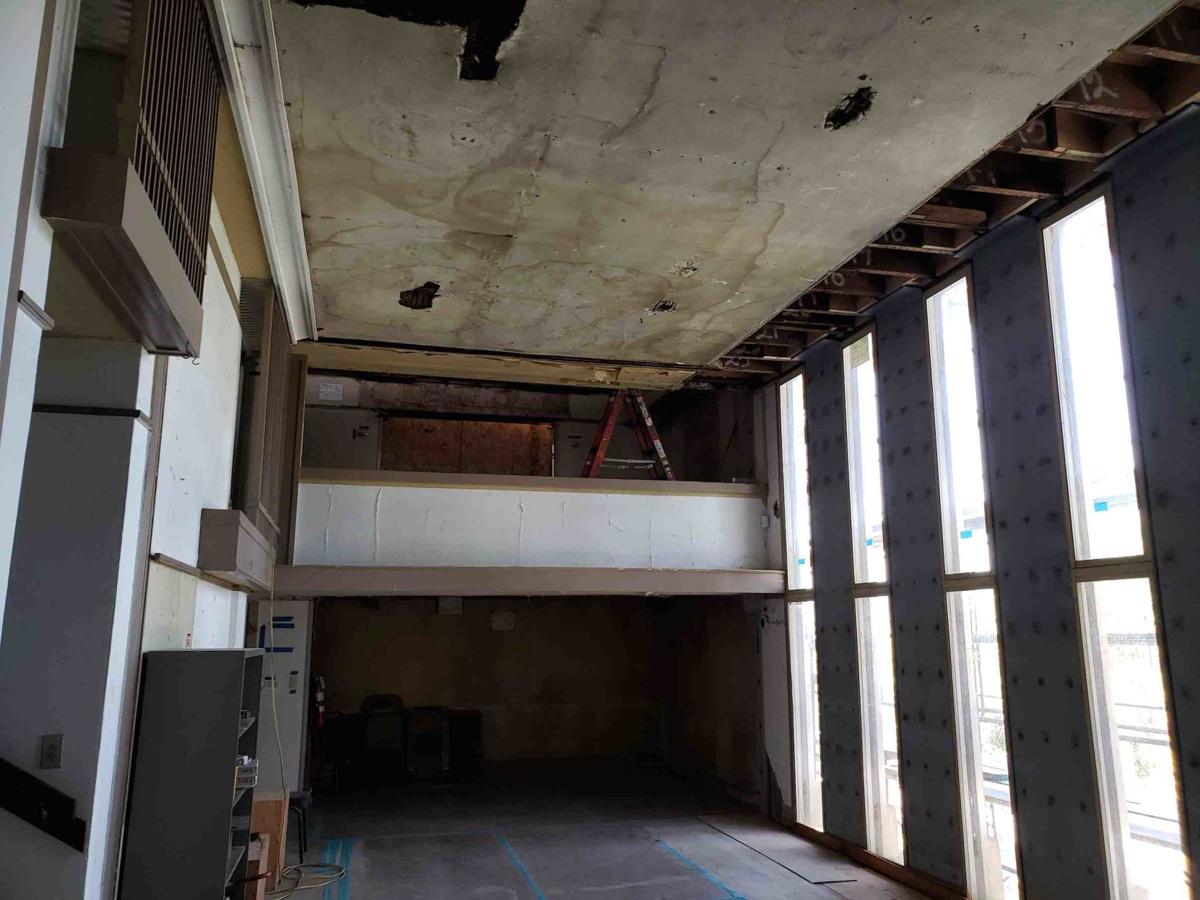 In the living room, looking up toward the second-floor dining room and kitchen. 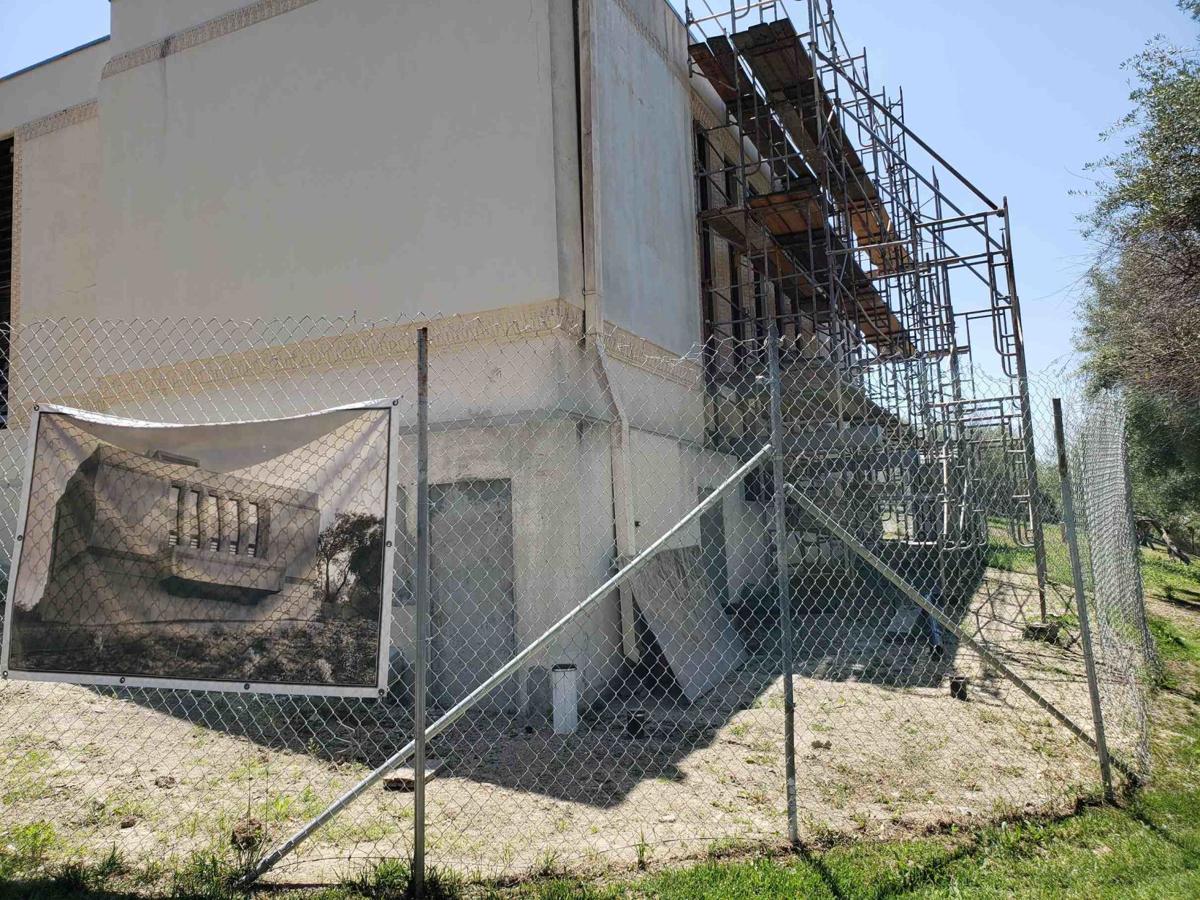 Northeast corner of Barnsdall Residence A, with a picture at the lower left of the original north balcony being restored.

East Hollywood - There is still a lot to fix at the Director's House, a 1920s building designed by Frank Lloyd Wright. A western bay window has been sagging under its own weight; the cantilevered balcony that once jutted out from the north side of the building needs to be  recreated; rotted wood in the roof needs to be replaced and the mechanical and electrical systems as well as plumbing are in need of substantial repairs.

The ambitious and costly restoration of the structure -- part of a hilltop compound that includes the more well-known Hollyhock House, also designed by Wright -- got a big boost on Tuesday. City officials announced that the National Park Service had awarded a $500,000 grant for the repair and preservation of the building, also known as Residence A.

The award, one of five in the State of California and the largest, is made possible through the Save America’s Treasures grant program, which is funded by the Historic Preservation Fund and administered by the National Park Service, Department of Interior.

“We are very excited about this award because it will enable us to complete repairs and preserve this historically and culturally important space so that today’s Angelenos as well as future generations can experience Barnsdall Art Park in its totality, the way it was meant to be experienced,” said Ed Avila, president of Project Restore, which is spearheading the restoration.

Said Councilman Mitch O'Farrell, “The rehabilitation work on this long-neglected Frank Lloyd Wright-designed structure at Barnsdall Park will enable the city to return the space to the benefit of the public."

The plan is to make Residence A look as close as possible to its original form, according to Kevin Jew, Project Manager and Chief Operating Officer of Project Restore. Project Restore has already renovated Hollyhock House, the main residence, which is now open to tours.

The renovation of Residence A -is a $5.2 million project that is mostly but not quite fully funded. Two thirds of the $1.87 million seed money has been spent, much of it on fighting the seams against water damage, Jew said. The project is now getting $1.9 million from the city in this year. All the house needs now is another $1.43 million - and about three more years.

Along with Hollyhock House, Residence A, originally meant as an auxiliary residence for a theater director, was one of three buildings designed by Frank Lloyd Wright for Aline Barnsdall, and completed in the early 1920s.  The other guest house, Residence B, was razed in 1954.

Jew walks through the grand, gutting living room in this remaining guest house, pointing out where a drainage pipe has been moved, and where new steel columns have been added to the north-facing windows.

He points out, as well, where the original design itself suffered from poor engineering. That concrete-and-stucco balcony that used to come off the north windows was originally supported by just two pieces of lumber, which is why it had to be removed and replaced in the 1940s by a lighter wooden balcony. And beams seems to have been laid out wrong for supporting that western bay window.

“Structurally it was badly thought out and badly executed,” Jew said about the beams, which ran north-south instead of east-west to give further support to the protruding structure.

Much of the project is also like an archeological dig. Once workers removed some of the crumbling building material, Jew’s crew discovered another reason the bay window was starting to fall down. Cracks in the plaster had been repaired, year after year, with more layers of plaster, until the stucco exterior became four inches thick - and heavy.

Other discoveries: Once the ceiling was exposed at the entry level, builders found evidence of a fire - probably electrical - which apparently occurred in the 1970s. And then there’s the roof. Sometime in the 1940s or 1950s, a second roof was added on top of the the original one. Project Restore has since taken of that second roof. Now some materials in the original have to be replaced.

In other ways, the renovation resembles nothing so much as a scavenger hunt: Finding building materials that match the original. A lot of the water-damaged wood in the doors, for instance, is from old-growth lumber, which is hard to find. Once they found some at a lumberyard somewhere, they bought every stick they could.

Jew said Project Restore is aiming to finish Residence A in 2022.

“We learned a lot on Hollyhock House,” Jew said. “That’s why I feel confident.”

Great story but the Entire Barnsdale Art Park is in Los Feliz not East Hollywood!

Every address on Hollywood Blvd between Western and Hillhurst is according to The City of LA los Feliz and the Zip code is 90027 also Los Feliz. The Observatory may be our"Hood Ornament" but Barnsdale is our "Crown Jewel"