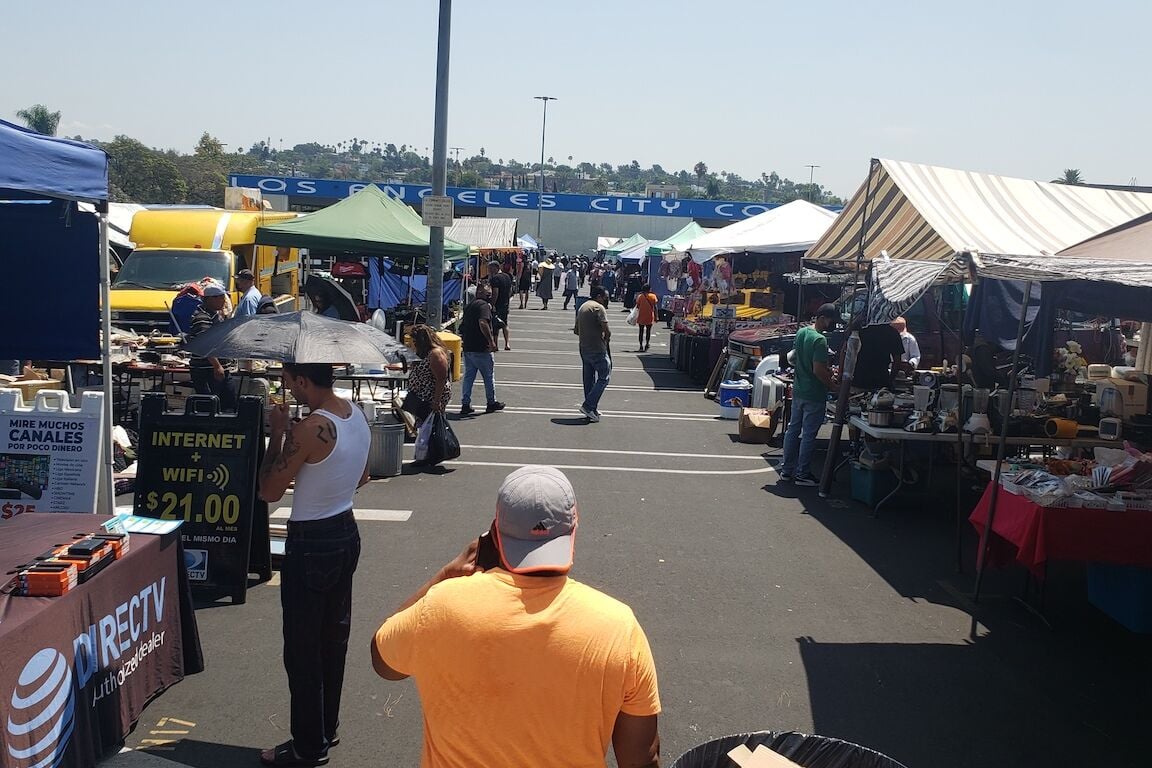 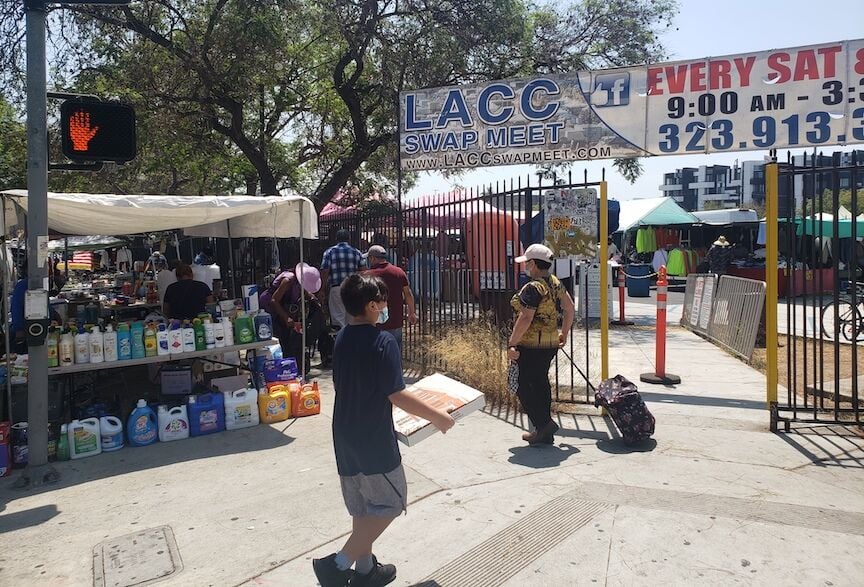 Sidewalk vendors picks a prime spot near one of the entrances to the LACC Swap Meet. 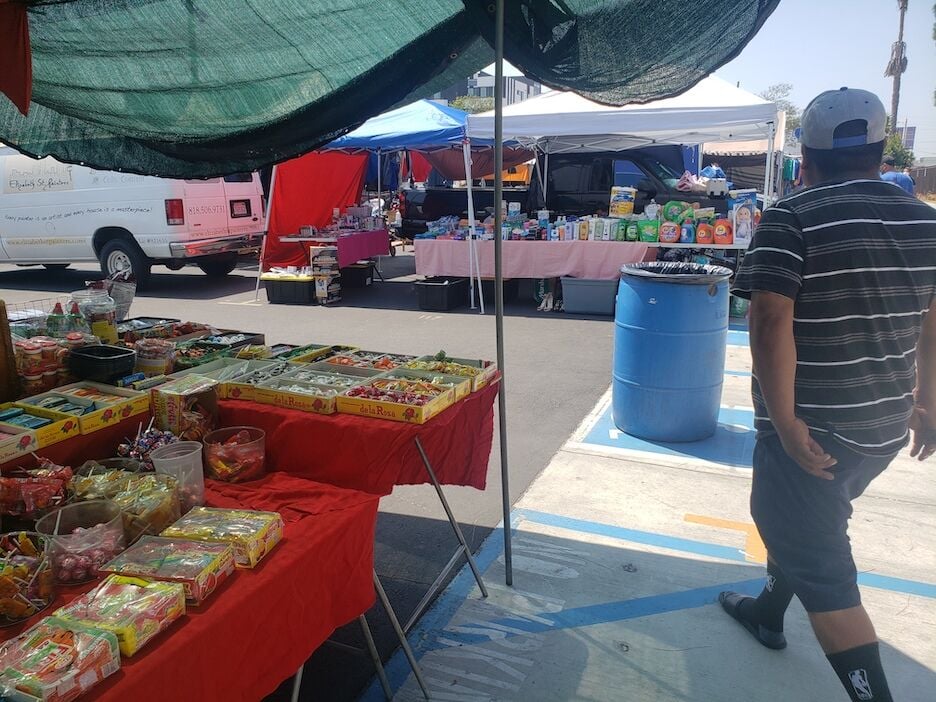 Inside the LACC Swap Meet - candy and soap. 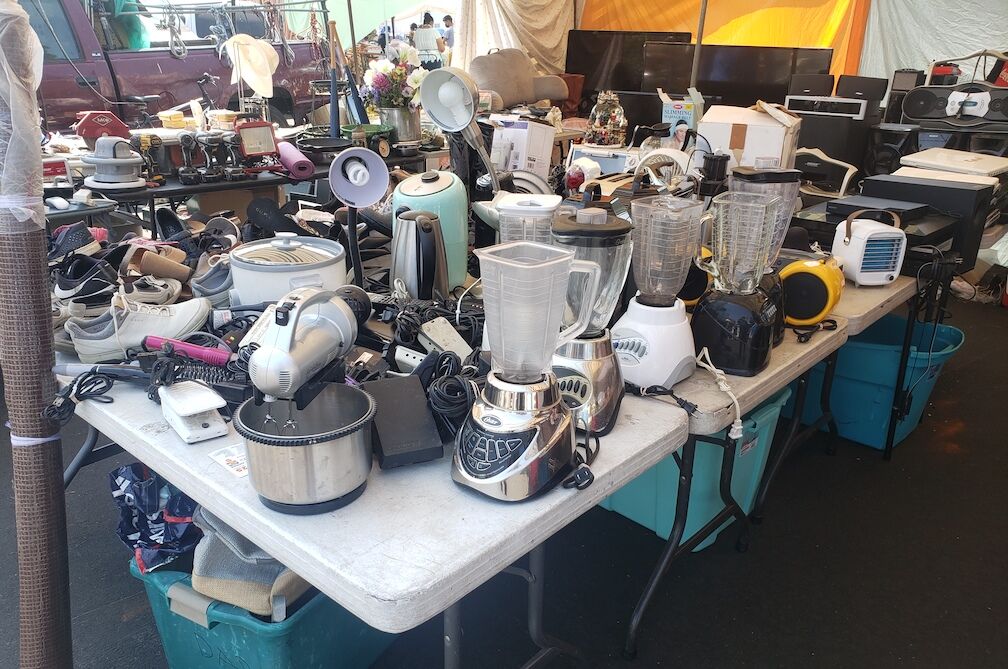 The blender vendor - inside the LACC Swap Meet. 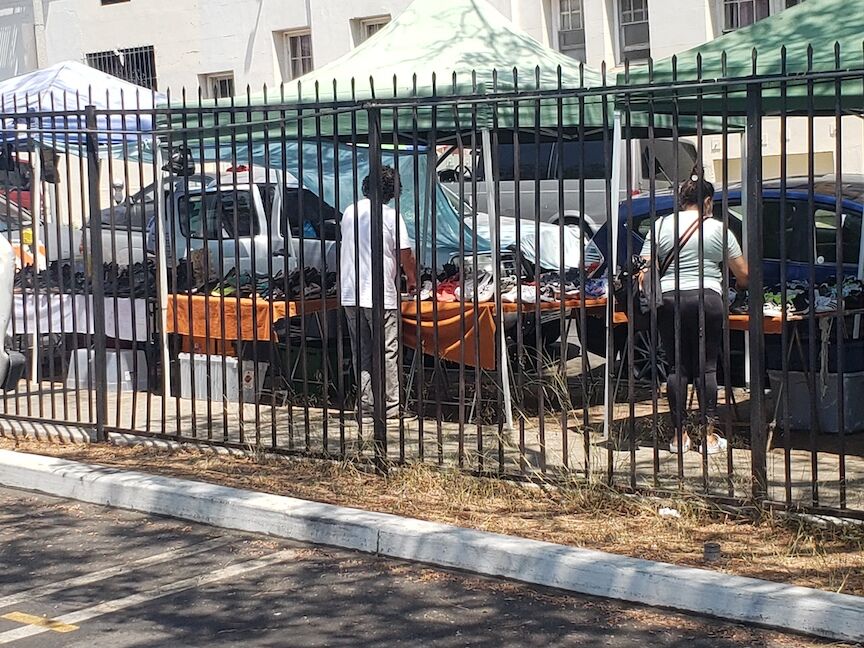 East Hollywood - The giant swap meet that has been running near Los Angeles City College for more than 20 years may cease operations at the end of the month, when the company that manages the event withdraws from the contract.

City College officials say part of the problem are nearby street vendors, who are drawing away customers and income. They also said an ordinance that bars outside vending within 500 feet of the swap meet is not being enforced by the city's Bureau of Street Services.

Newport Diversified, which runs several swap meets, has operated the LACC Swap Meet on Vermont Avenue since the weekend event began continuous operation more than twenty years ago. But it is terminating its agreement with the school as of August 1, say college officials.

LACC Swap Meet Revenues are down at least 75%

The school is in talks with another operator to take over, according to Robert Schwartz, executive director of the Los Angeles City College Foundation, which oversees the weekly over-air marketplace.

But it could be a tough sell. Since reopening in April after the pandemic, the swap meet has been making 75% to 80% less money than usual, Schwartz said. Newport Diversified  blamed the sharp drop in revenues for their decision to end the arrangement, according to Martha Palaya, director of corporate and foundation relations for the LACC Foundation.

Much of that revenue is supposed to come from fees on swap meet vendors, who would normally pay through a competitive bidding process. But vendors have not been getting charged the normal rates, resulting in a drop in income, even though the operator told Schwartz that the swap meet is now filled to 80% capacity.

"April was free and the past two months have been at half price. That, in addition to reduced patronage, has resulted in the loss of revenue that we’ve described," Schwartz said.

Since 1998, the swap meet has been running continuously in a large parking lot across the street from the Braille Institute - taking up most of a 4.73-acre city block. It usually draws around 170 vendors, Schwartz said. In previous years, the marketplace would typically generate about $650,000 annually, covering the foundation's operating costs and freeing up funds to be used for scholarships and other support for the college, Schwartz said.

Then came the pandemic. The meet - like everything else - shut down. And while it was closed, vendors started setting up shop outside the gate.

Now that the swap meet has reopened, many of those vendors say they don’t intend to come back inside and pay the competitive fee, Palaya recently told the East Hollywood Neighborhood Council.

And the number of those outside vendors has grown.

“Two years ago there were almost no vendors on Vermont within the block running outside the fencing for the parking lot and swap meet,” Schwartz said. “There are currently about 45 street vendors along that one block area.”

Indeed, on Saturdays and Sundays - the swap meet days - vending tables now stretch along the east side of Vermont Avenue for about half a mile, from Santa Monica Boulevard to Melrose Avenue.

An ordinance should be preventing this, Schwartz said. Outside vendors are barred from setting up sales within 500 feet outside the swap meet. But by all accounts, that law doesn’t seem to be getting enforced.

The city’s Bureau of Street Services is responsible for enforcing the restriction, according to Dan Halden, a spokesperson for City Councilmember Mitch O’Farrell of District 13. Schwartz said the LACC Foundation has been in regular contact with O’Farrell’s office, and that signs alerting vendors of the ordinance have been ordered, but not yet been installed. The Eastsider has reached out Street Services for comment.

Pelayo added, “We fear that while the issue of those vending directly outside the swap meet designated area is not resolved ..., it will be difficult to get another company to take it over.”

That might not just be a problem for the vendors inside the gate, but also those outside. A rare coin seller down the block at Vermont and Normal - who identified his stall as Vermin on the Street -- said the absence of the swap meet would impact him, too.

“If the swap meet closes,” he said, “I think there’s no people coming.”