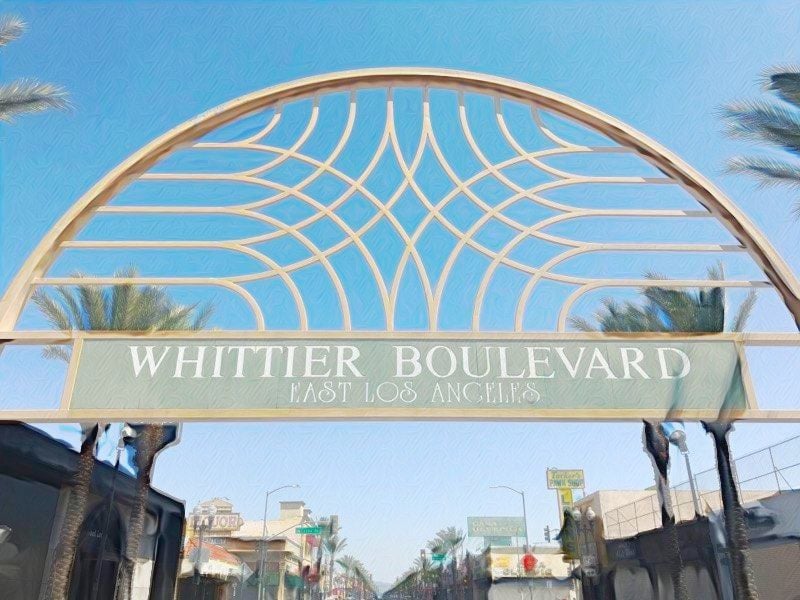 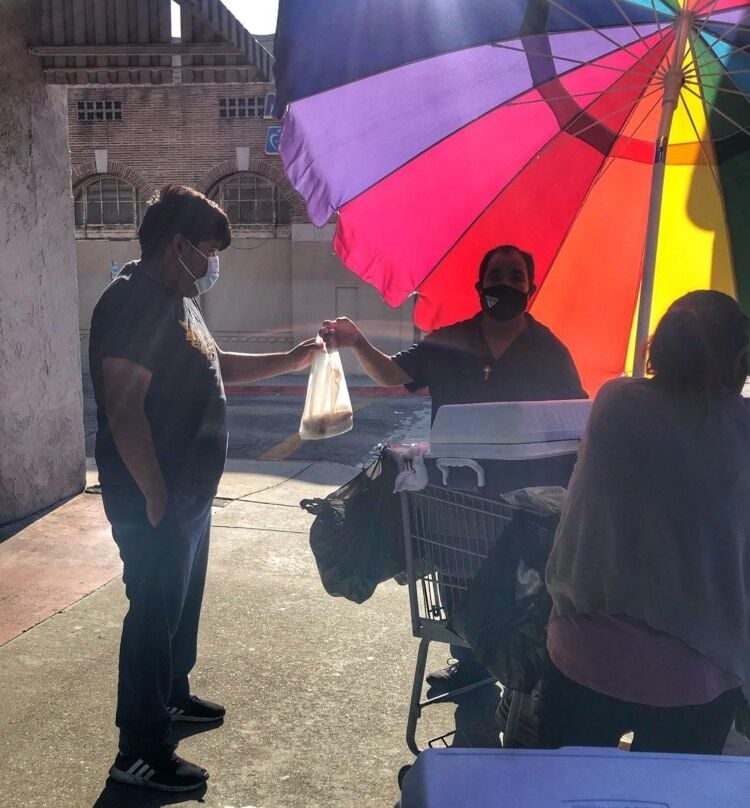 An umbrella creates a colorful backdrop for a tamale vendor at 1st Street and Townsend.

Share your East L.A. photos by sending them to hello@TheEastsiderLA.com or submitting them here. 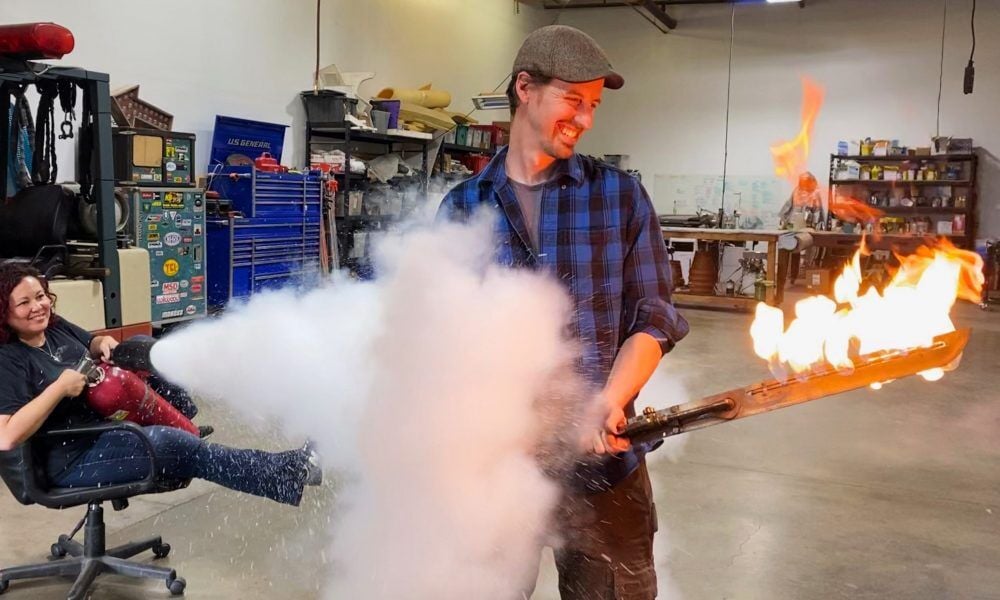 In this issue we learn about a shop that creates Hollywood props, costumes and special effects. We hear about the decision to cancel the Mexican Independence Parade. And a hometown hero receives an honor from UCLA. Puede leer una versión en español de este boletín aquí.

The post-pandemic future of the live entertainment industry may be in development at a highly-specialized industrial shop in City Terrace.

Cryptic Industries makes props, costumes, special effects and much more for theme parks, films and live entertainment attractions. Their work has been seen on such TV shows as Lego Masters and Master Chef, on numerous attractions at Universal Studios and even an interactive exhibition at the Autry Museum.

Work has slowed down because of COVID-19, but not so the creative process.

“We pride ourselves of being the ‘do everything’ [shop,] when it comes to fabrication, making things for events and attractions,” says partner Marcus LaMontagne. “But every place that we cater to, theme parks, museums, live events, film and TV commercials, unfortunately all of that is on hold because of this [coronavirus] thing.”

Moreno and LaMontagne founded Cryptic in 2016, after successfully bidding to create props and sets for the Walking Dead attraction at Universal Studios Hollywood. The pair had begun working together a few years earlier, when she was given her first job as a theater scenic designer and he was hired to build the set.

In a recent story in Voyage LA, Moreno and LaMontagne recalled how each took separate educational paths that brought them together.

Moreno grew up in Eagle Rock (and as a child, lived briefly in El Sereno), got her bachelor’s degree in sociology from Cal State LA, lived and worked for a stint in Paris. She returned to complete an MFA from California Institute of the Arts in writing/critical studies. She later moved on to freelancing jobs in the film and television industry.

LaMontagne began building things as a child in Kissimmee, Florida, and took auto shop and electrical engineering in high school, developing skills he would later use to complete a project from start to finish.

“I knew pretty early on that making stuff, hopefully for film and theme parks, was where I wanted to go,” he says. “So for an education standpoint, I tried to immerse myself into as many different methods and materials as I could.”

After earning his college degree in Savannah, Georgia, he moved to Los Angeles and began calling on the entertainment industry.

Since combining their skills at Cryptic, Moreno and La Montagne have applied their company tagline of “We Make Things” to a number of projects.

Moving into their space in an industrial stretch of Medford Street was an easy decision, said Moreno.

“We’d been looking in the area, and when this space opened up, we showed up with a checkbook that same day,” she says. “The neighborhood is wonderful, we have a new coffee shop up the street, and it’s right by my old college.”

Created a stylized version of Frankenstein’s lab for a production company on the Universal Studios Hollywood Backlot. We specifically made all of the lab equipment based off the 1930’s Frankenstein Film. In addition to making the wooden cabinets and tables in collaboration with @lafabricators , we produced custom metal hardware, sculpted and cast elements, and additionally implemented a show control system specifically for the lab equipment effects consisting of over 140 channels of dmx. Every individual light and gauge sweep were independently controllable and animated. An ambient show runs full time and a 30 second “overload” show is triggered by a large themed knife switch on the wall and is synced to an audio track and the room lighting. #crypticindustries #universalstudiosbacklot #wemakethings #props #propmaking #woodworking #woodwork #setdressing #specialeffects #metalwork #art #themedentertainment #electronics #frankenstein #frankensteinslaboratory #makingstuff

During normal times, Cryptic kept six full-time employees and hired as many as 25 freelance artists, depending on the size of the project. But everything came to a halt when the pandemic hit.

“Our entire industry has been completely shut down and a lot of our jobs have been put on hold or have been cancelled,” Moreno says. “It’s been pretty scary, honestly.”

She said that watching other artists continue to work on individual creative projects during the shutdown has inspired them to come up with practical solutions to what the future of live entertainment may look like.

“We do believe that people like to be around another. There is nothing that can replace live entertainment,” she says. “Even if it involves social distancing, using masks and gloves, we’re trying to prototype some ideas of bringing people back together.”

Testing at ELAC to expand

In an effort to help remedy disparities in high-need communities, Los Angeles County is going to ramp up COVID-19 testing at three existing facilities, including one that's been operating at East Los Angeles College since April, officials said.

“The fact that our communities of color fare poorly in health outcomes, and are more susceptible to COVID-19, is not an accident,” said Supervisor Hilda Solis. “Decades of institutional racism have made our communities more vulnerable, which is why I am committed to expanding access to COVID-19 testing sites.”

Details on the increased testing were not immediately available. A Solis spokesperson said that information would be provided later this week.

The outdoor, drive-through site has been operated in an ELAC parking lot through a partnership between the county, the college and the Edward Roybal Comprehensive Health Center in East Los Angeles.

Located in Monterey Park, the ELAC site is the nearest county-operated testing facility for most East Los Angeles residents.

Health authorities said that 57% of new COVID-19 cases reported on Tuesday occurred in people under the age of 41 years old.

No Mexican Independence Parade this year

“We took the decision to postpone, because of the health risks and in support of the safety measures imposed by health authorities,” said José Duarte, president of the all-volunteer committee that organizes the event.

This is the first time the parade has been suspended since it was first held in 1946, Duarte recalled.

Every year, dancers in traditional costumes, charros on horses, marching school bands and local elected politicians take the mile-and-a-half eastbound route between Mednick and Gage, in what is considered the oldest Latino-themed parade in the United States. About 30,000 people usually enjoy the parade and following festival, held at Belvedere Park.

Traditionally, the Mexican Independence Day Parade takes place on a Sunday on or before September 16, the date in 1810 that marked the beginning of Mexico’s War of Independence against Spain.

Duarte said the committee is now in discussions with the Mexican Consulate and the City of Los Angeles over how another major commemoration – the Sept. 15 “El Grito” ceremony– will be held this year. In all likelihood, it will be a virtual celebration.

Former congressman Esteban Torres will receive the UCLA Medal, the university’s highest honor, in a virtual ceremony at 5pm on Wednesday.

Torres served eight terms in the House of Representatives, from 1983 to 1999, representing the 34th Congressional District –which includes East LA. He had been a labor organizer for the United Auto Workers union and later served as an ambassador to UNESCO.

A lifelong advocate for the arts, and an artist himself, he chaired the National Latino Media Council from 1999 to 2016.

“His life is exemplary of the standards that are represented in UCLA’s mission as a public university,” said Chon Noriega, director of the UCLA Chicano Studies Research Center and professor in the School of Theater, Film and Television. The center is home to Torres’ extensive personal papers.

Born in Arizona in 1930, Torres moved to East LA with his mother and grandmother in 1936, after his father was deported to Mexico. He attended public school in East L.A. and graduated from Garfield in 1949.

In 2010, a new high school in East Los Angeles was named in his honor.