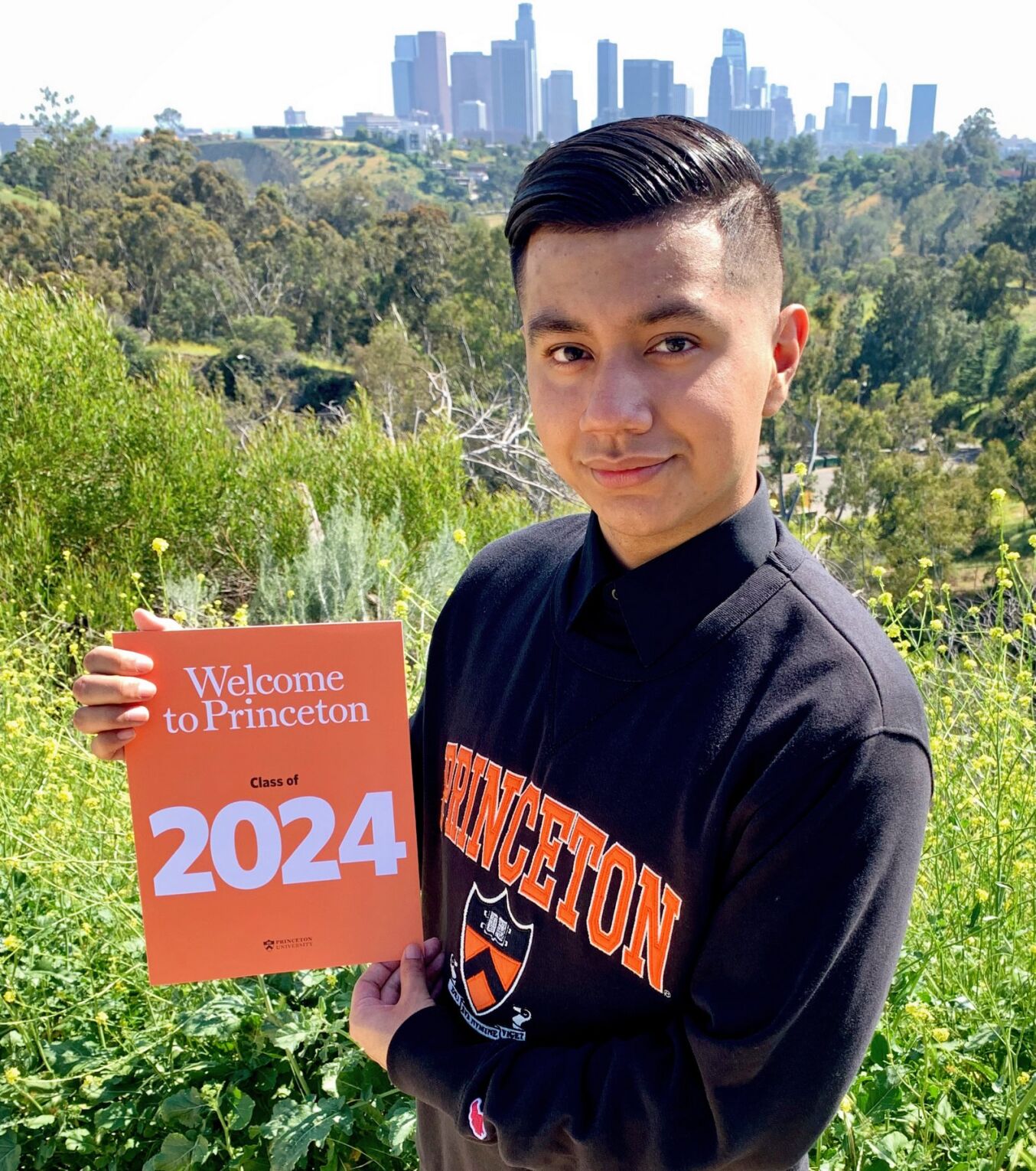 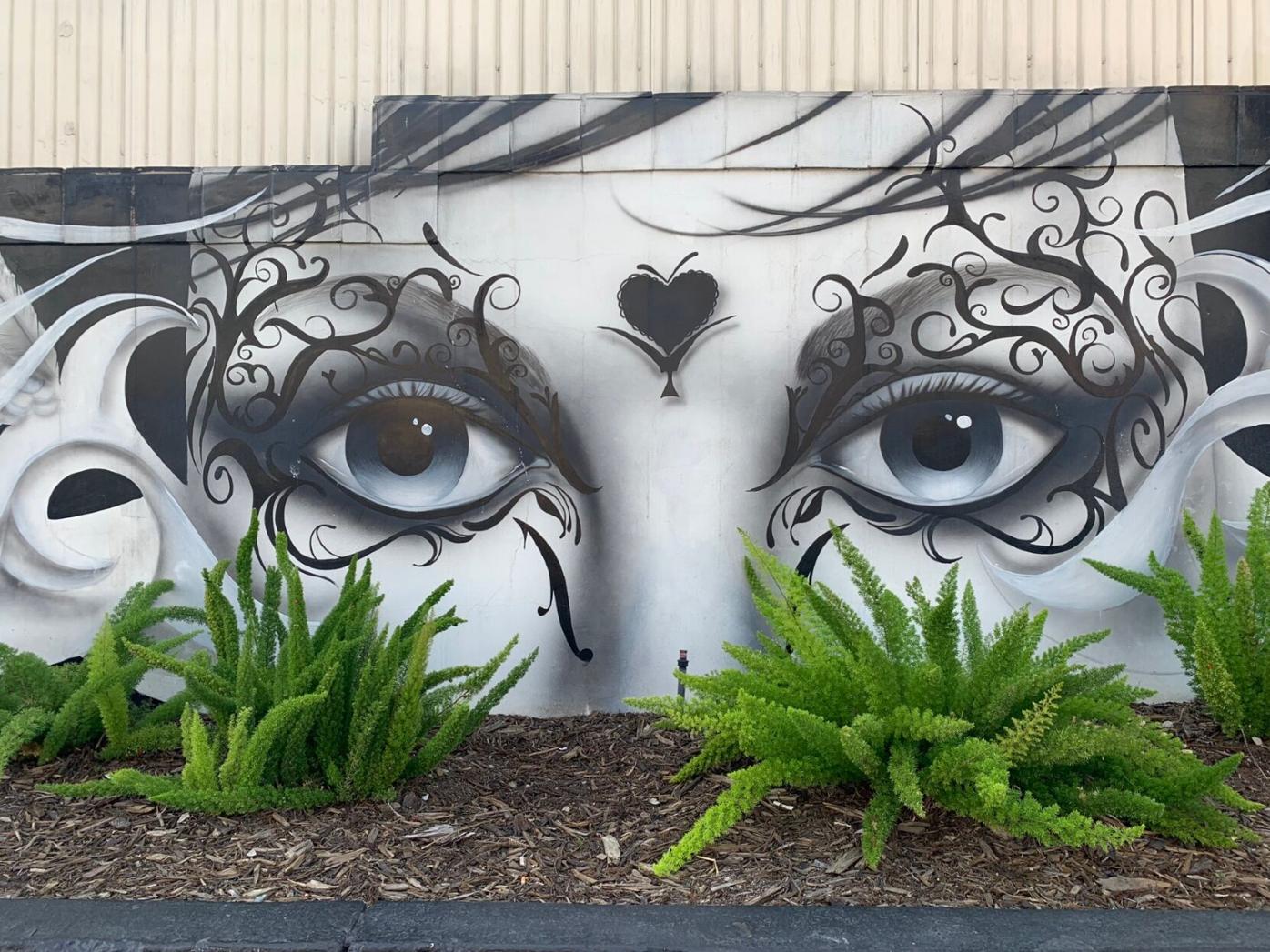 A pair of mysterious eyes gaze out from the mural that wraps around the walls of the United Oil gas station at Floral Drive and Eastern Avenue. Thanks to Jeimmy Grace for sharing the photo.

You can share your East L.A. photos by replying to this email or by submitting them here.

In this issue, we learn about a Garfield High graduate who was accepted into some of the nation’s top colleges. We look at art that celebrates life in East LA and other neighborhoods – and art that pays tribute to a slain soldier. And we report on staggering coronavirus statistics for the neighborhood. Puede leer una versión en español de este boletín aquí.

Garfield High School grad Julian Jimenez had earned a tremendous honor -- a full scholarship to Princeton University, with school starting in the fall.

Jimenez and his parents, who live in East LA, were all but packed for the trip to the Ivy League school’s New Jersey campus, where they were to be quarantined while he settled in at his dorm, in accordance with that state’s strict rules for out-of-state visitors.

But a last-minute announcement this week from Princeton University meant a big change for Jimenez, a first-generation college student.

Princeton had originally planned to have first-year students and juniors stay on campus from August to right before Thanksgiving. But on Monday, the school said the health risks from COVID-19 were too great for in-person instruction and cancelled all invitations to campus, shifting to an all-remote undergraduate program for the upcoming semester.

The school’s location had been a decisive factor for the Garfield grad, who was accepted into several prestigious universities, including three Ivy League schools. He chose Princeton over Columbia (New York City too fast-paced) and Dartmouth (the New Hampshire campus too bucolic).

“Princeton was in the middle of both worlds,” he says. “It’s a small college town, with a great access to New York and Philadelphia, and an entrepreneurship program that I was really interested in.”

That Julian was accepted into some of the country’s top schools has undoubtedly been a source of pride for his parents, Ernesto Jimenez and Crystal Corona, who early on worried about the boy’s future.

“We were told by a couple of teachers that my son might have an attention disorder that would make learning difficult when he was in elementary school,” the 36-year-old father wrote in an email to The Eastsider last month.

It turned out that Julian was gifted and simply bored in elementary and middle school. He didn’t find his groove until he was accepted into a magnet program at Garfield High School and, at the urging of a ninth grade English teacher, joined the Fellowship Initiative, a national program designed to help young men of color get into college.

While Julian credits his teachers at Garfield for helping him get to Princeton, the East Los Angeles high school was not his original choice.

“My dad went there in the '90s and he would tell me horror stories,” says Julian. “I was surprised to see that the teachers really got to know me, they were really nice, and helped me if I had any issues. I think it was the reason why I got into Princeton, because Garfield teachers were so caring and so passionate about their students.”

Since being accepted, Julian has joined Princeton’s Summer Bridge program for first generation, low-income students and has already taken two online courses, which prepared him a bit for this week’s unexpected news.

In spite of the last-minute change, Julian’s accomplishments are still memorable for his family.

This spring, on the day the Ivy League schools sent their acceptance letters, Julian gathered his family in front of his laptop to open them. His parents cheered with every yes and an aunt recorded his reaction on video.

The ritual was his way of thanking them.

“They’ve done so much,” he says. “They’re the ones who would drive me to the Fellowship Initiative on Saturday mornings at 8 am. They were always supportive.”

As the number of COVID-19 deaths in Los Angeles County passed the 5,000 mark, East Los Angeles marked a tragic milestone of its own.

The number of coronavirus cases in East LA topped 5,000 mark over the weekend -- a figure higher than in any other unincorporated area. East LA now has more cases than any city in the county except for Los Angeles and Long Beach.

East Los Angeles tenants who are struggling to pay their rents because of the COVID-19 crisis may apply for help from a $100 million relief program the county is launching on Monday, Aug. 17.

The program, approved this week by supervisors and operated by the county Development Authority (LACDA), intends to assist between 8,000 to 9,000 families with CARES Act funds. The program will target those with the greatest need.

Applications will be accepted for two weeks through Aug. 31. It’s open to all county residents except those who live in the City of Los Angeles (which gets its own CARES Act funds). Citizenship documentation will not be required, but property owners must provide certain documentation and agree to terms of participation.

More information is available at rentrelief.lacda.org

The piece by the East LA native is part of this week’s launch of “For the Love of LA,” an online platform for LA artists to express their feelings for LA County during the pandemic. Each Tuesday, the Music Center will add new artists to the online gallery. County residents will be encouraged to post their own works on social media. Some pieces will be selected to appear on the site.

Tuesday’s launch included a video collaboration by poet and photographer Rafael Cardenas, known for his striking images of Eastside neighborhoods and residents. A third artist, South LA’s Yaneli Delgado, created a print with iconic images from various neighborhoods, including a cruising car under the Whittier Boulevard arch in East Los.

A mural on a wall of the Zacatecas Federation of Southern California in City Terrace will honor the life of Vanessa Guillen, the soldier killed in April in Fort Hood, Texas.

KABC 7 reported that the mural is being painted by Boyle Heights artist Juan Solis.

“When I saw the news, I felt the pain of her mother,” Solis said. “So I thought it was very appropriate to do my part using what I do, which is painting ... to paint a tribute here in my community."

The federation, which helps people from the Mexican state of Zacatecas and is located on Miller Avenue near City Terrace Drive, plans to unveil the mural this month. Guillen’s family is from Zacatecas, as is the muralist.

A 26-year-old skateboarder was struck and killed by a Metro bus in City Terrace this week, authorities said.

The accident occurred about 12:40 a.m. on Sunday, on City Terrace Drive near Pomeroy Avenue. The victim, identified as Peter Timoteo Smith Padilla of Pomona, died at the scene.

Although initial reports said the Eastbound 70 line bus hit the victim and drove off for several miles, the CHP determined it was not a hit and run.

According to some witnesses, the skateboarder collided with the bus while it was stopped at the intersection. The victim fell under the vehicle which took off and ran over him, the witnesses said.

Twelfth homicide so far in 2020

A man shot and killed while walking his dog this month was the twelfth homicide victim reported in East Los Angeles so far this year.

Sheriff’s deputies found the man suffering from multiple gunshot wounds in the 900 block of South Rowan Avenue, near Whittier Boulevard, at about 9:35 p.m. on Aug. 5. The 43-year-old man was taken to a hospital where he died. He was later identified as Oscar Moreno Gomez, of Los Angeles.

The shooting was gang-related but the victim was not a gang member, authorities said.

The killing happened just two days after a 20-year-old woman was fatally shot in her home in the 700 block of S. Hillview Avenue. Authorities arrested her 23-year-old boyfriend and booked him on suspicion of murder.