In this issue, we marvel at the miracle of a beloved religious icon. We also learn of two historic East LA events getting national recognition and stop by one of the oldest bakeries in the community.

There are hundreds of murals and shrines dedicated to the Virgin of Guadalupe throughout the Eastside. But not many can claim a miracle like the one at the corner of Eagle and Kern in East LA.

Last week, about a dozen neighborhood women began their yearly novena -- nine consecutive evenings of rosary prayer -- in front of the icon on the side of the appropriately named La Milagrosa Market.

The novena ends December 12 with a huge feast and celebration that includes a Mass and free dinner, or convivio. Upwards of 200 people have attended in years past, said Rosa Flores, who has led the prayer for some 15 years.

This year, however, it will be hard to tell how many will show up during the pandemic, Flores lamented, before dedicating the rosary to COVID victims on Sunday.

Ever since her fabled apparition in 1531 on the hill known as Tepeyac in what is now Mexico City, the Virgin of Guadalupe has been one of the most venerated images among Catholics. In LA, the Guadalupe was embraced by the Chicano movement, and some of its most important artists have left their interpretation of the motherly figure on East LA walls.

While some add social justice themes to their murals, most images and shrines at corner stores are meant strictly for devotion.

So why, of all the Guadalupe murals and shrines across the neighborhood, is the one at Eagle and Kern so beloved? 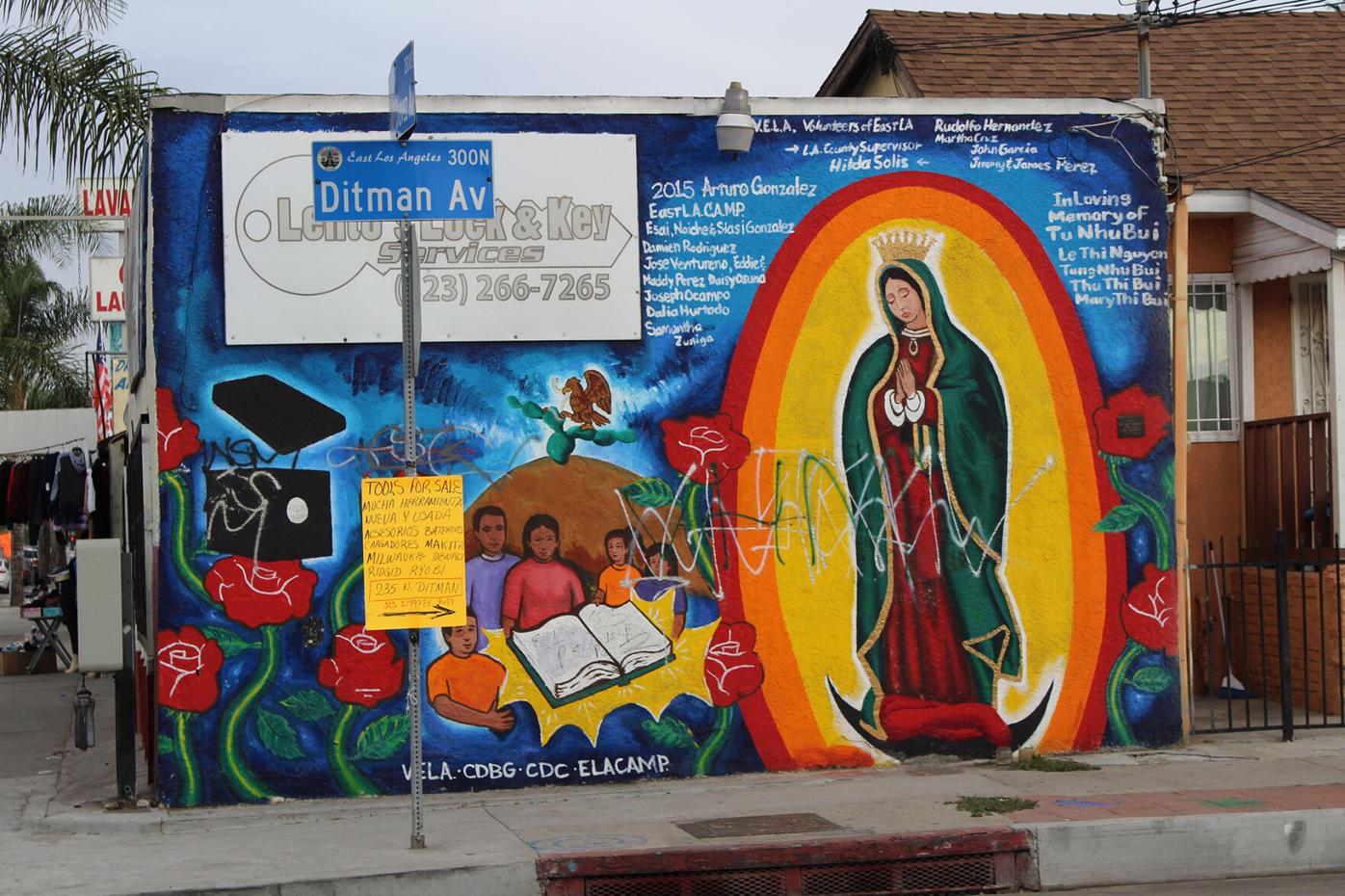 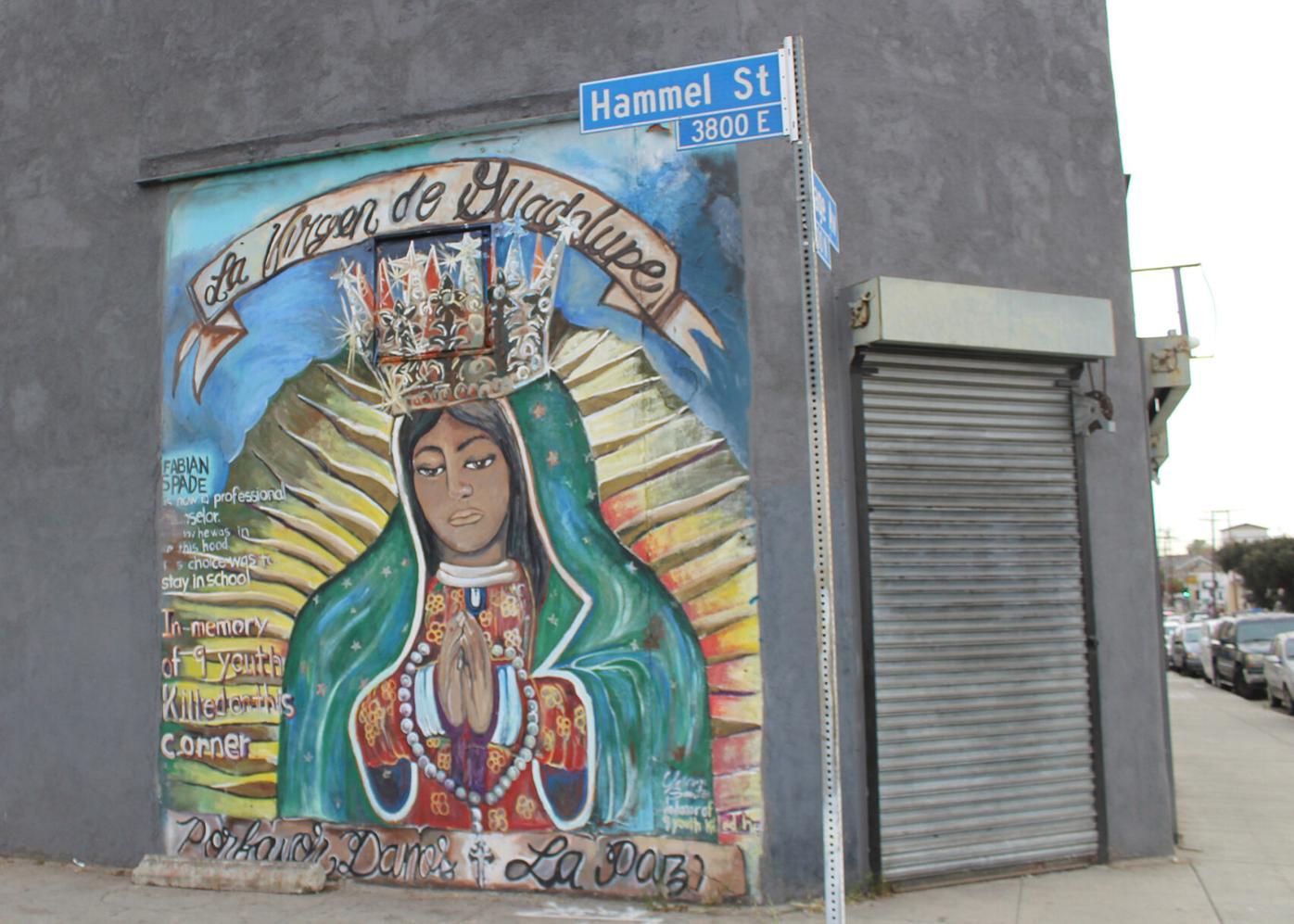 On the corner of Gage and Hammel 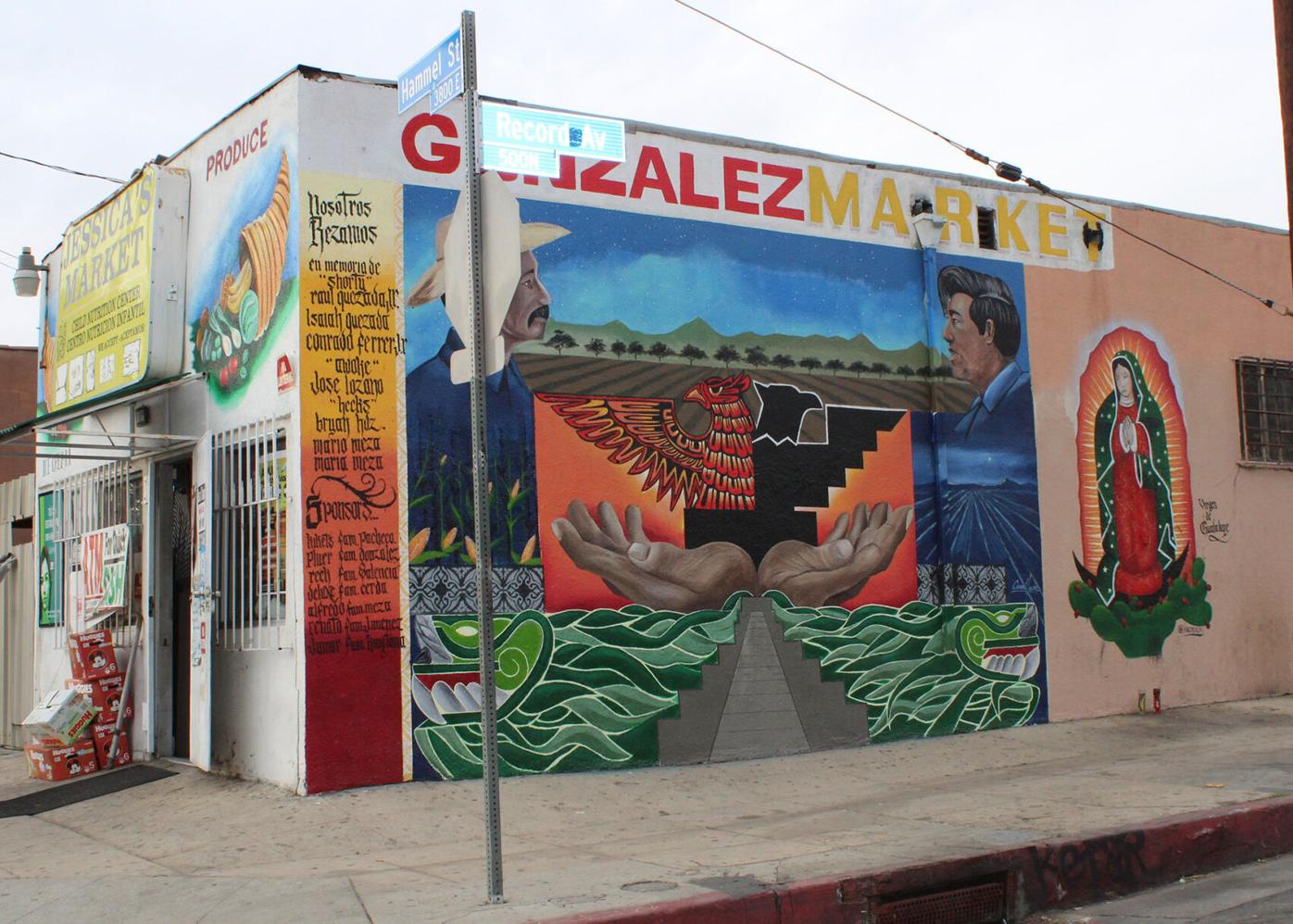 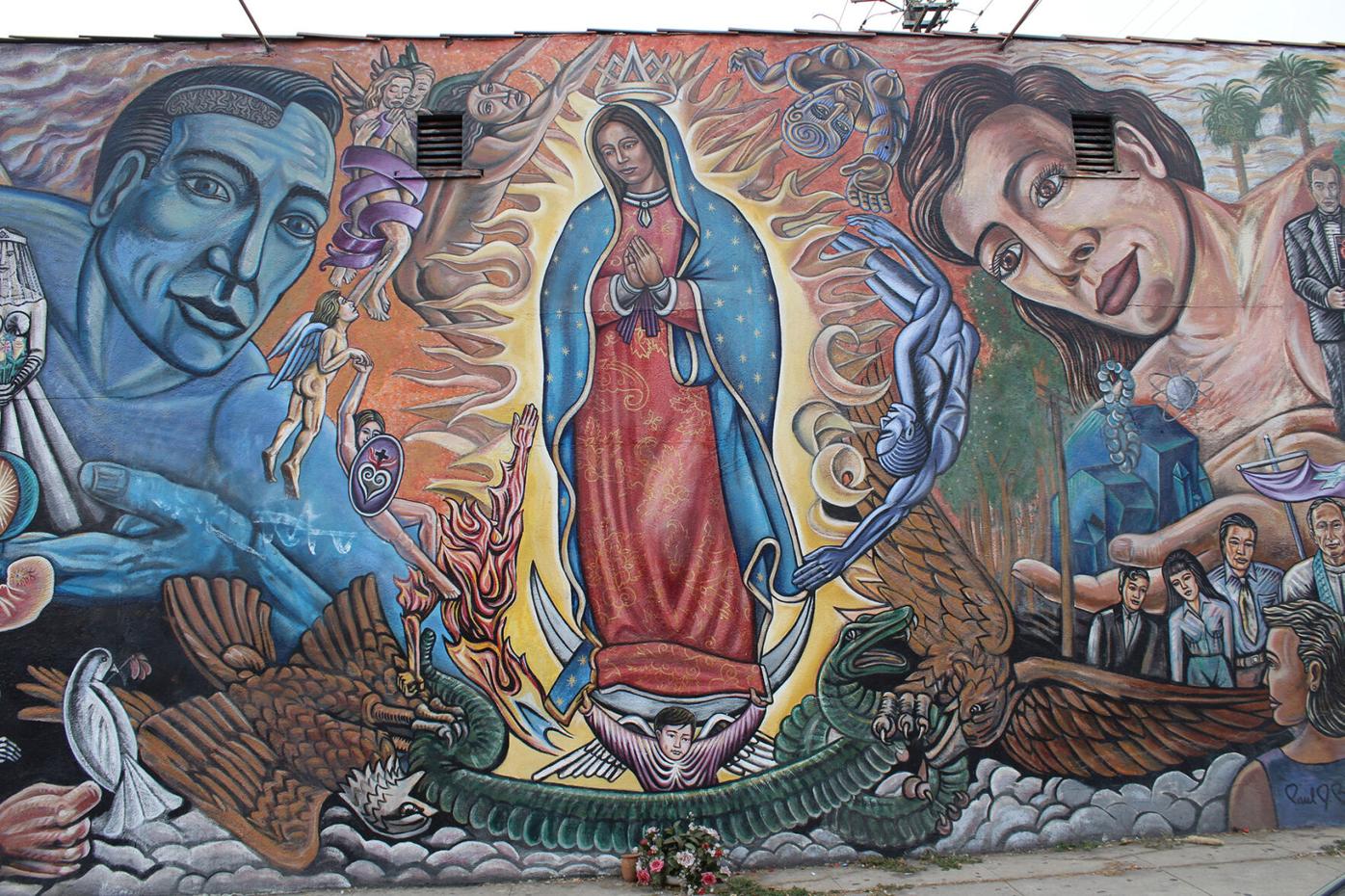 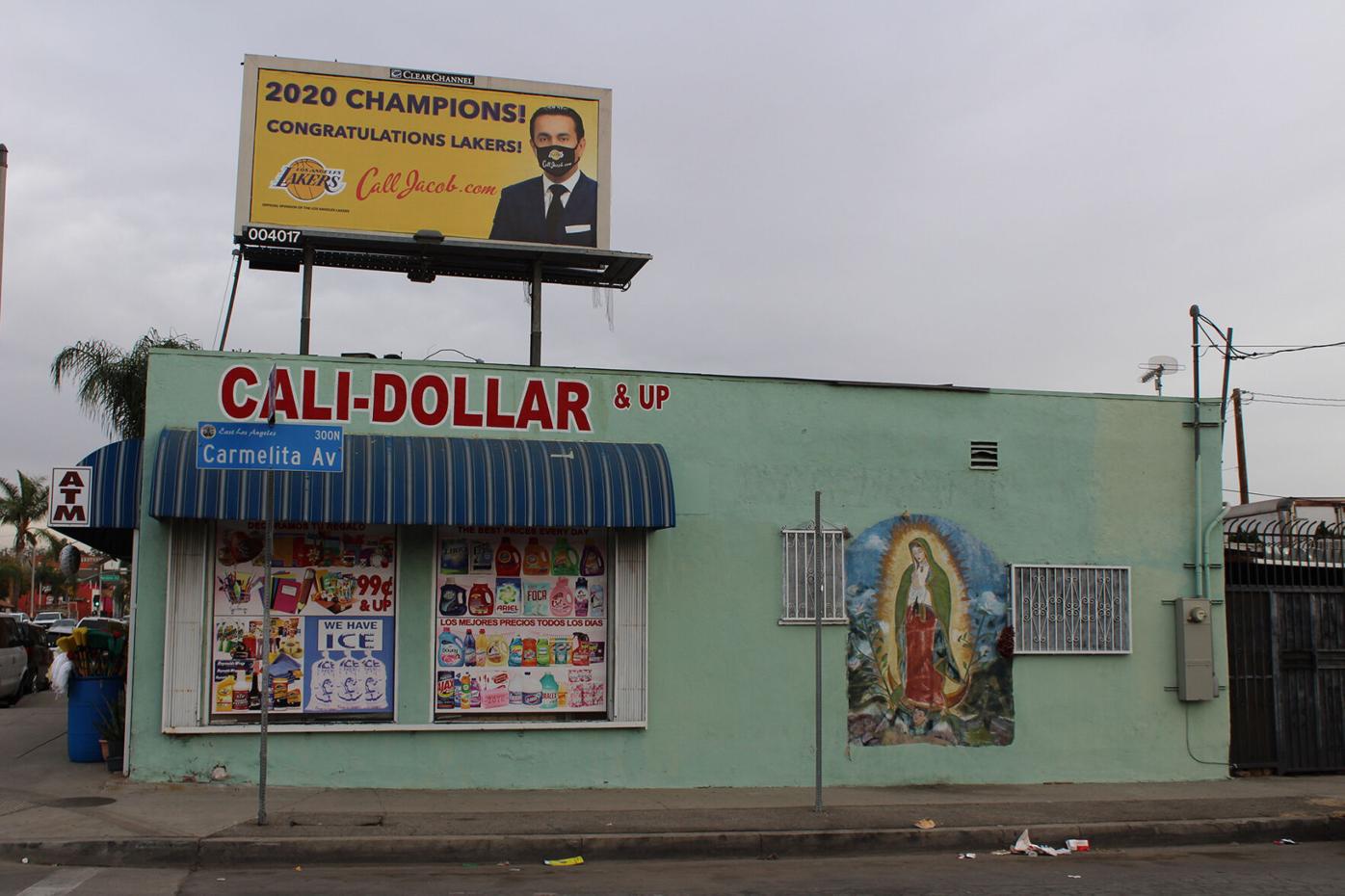 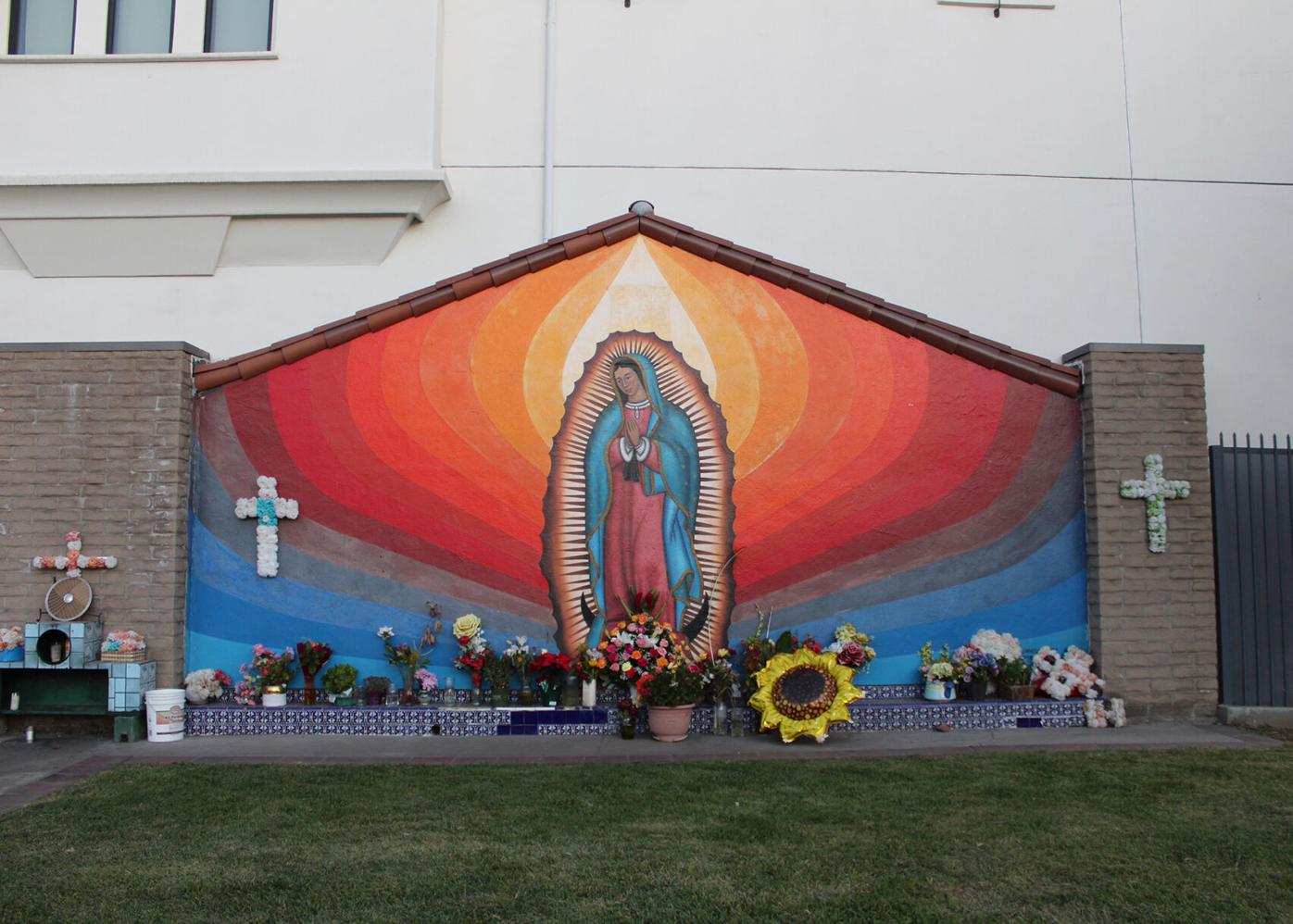 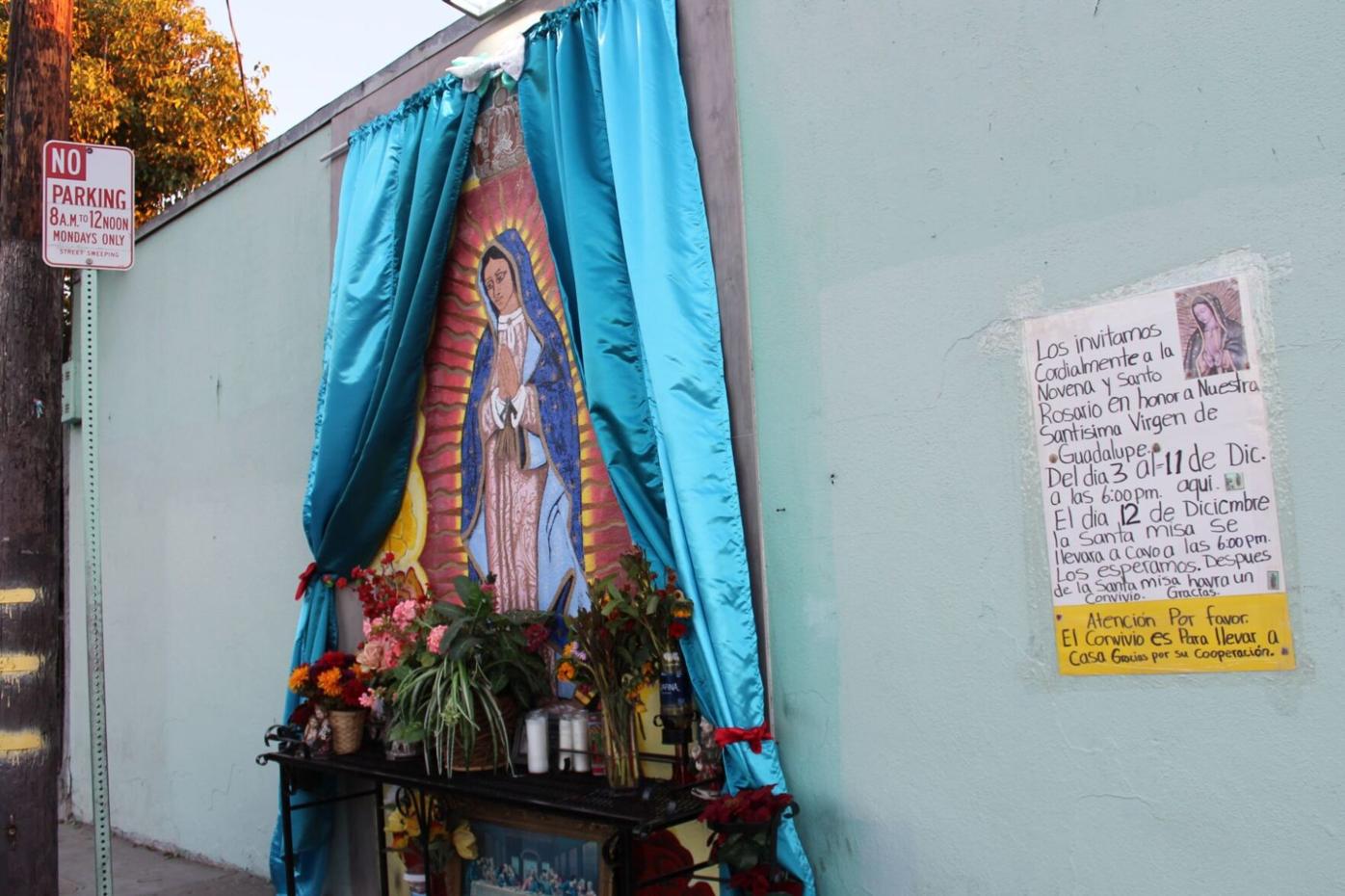 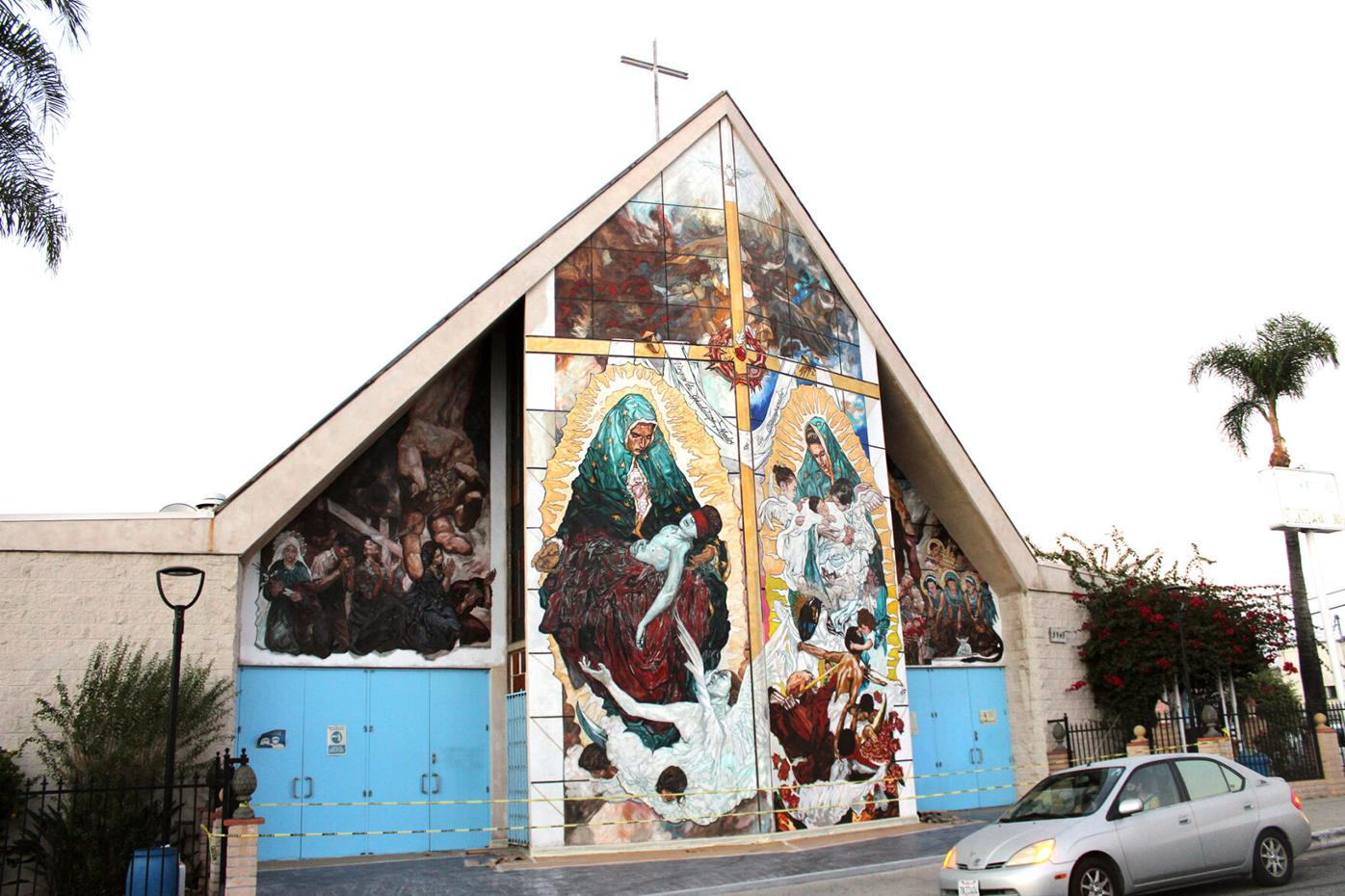 The Guadalupes of East LA

On the corner of Gage and Hammel

A 2008 LA Times article offered the tale of the La Milagrosa miracle as told by the store’s owner: Sometime in the 1960s a fruit vendor was robbed at knifepoint near the tiendita. “Stabbed and bleeding, he looked up at the mural ... prayed for help and stumbled inside,” the article reads.

When the vendor got to the hospital the doctors found no wound. Ever since then, people stop by with flowers and candles to pray for a miracle of their own.

Rosario Marín has prayed in front of the La Milagrosa image ever since she moved into a nearby house 37 years ago. Shortly after that, she said, a man broke into her sister’s house and seriously injured her 3- and 10-year-old daughters and left them in a coma for 15 days.

“I prayed to Mother Mary to heal them,” the immigrant from Zacatecas said. The two girls woke from their comas and ever since then she’s held a reliquia, offering the feast of asado de puerco to the Virgin.

There will be asado again this Saturday, Marin said. “But the convivio will have to be to go.”

A new highest number of new cases in the neighborhood, 278, was reached on Saturday – pushing the area total to the 10,000 milestone, which was reached and surpassed on Monday.

The weekly average of daily new cases jumped last week to 156, almost twice the previous week’s average of 74, and is likely to increase again this week.

L.A. County Sheriff Alex Villanueva says his department will not enforce the state’s latest stay-at-home orders at restaurants and retail businesses in East Los Angeles or other county areas it patrols. Villanueva told FOX11 such enforcement is the health department's job, not his deputies.

"I want to stay away from businesses that are trying to comply the best they can," the Sheriff said.

A parishioner at Our Lady of Solitude Catholic Church led Sunday’s annual Virgin of Guadalupe procession. But the event wasn't held in East LA, as has been the case for many years.

Instead, it was moved to San Gabriel to avoid the crowds that usually gather along César Chávez Avenue, reports the  LA Times. East LA resident José Juan Morales drove the first vehicle with a sacred image of the Virgin that has been traveling to parishes throughout the Archdiocese of Los Angeles in the last few weeks. A huge Mass, which has been held at the East Los Angeles College stadium in recent years, was turned into a smaller event at the Mission San Gabriel.

Customers can be seen lining up, maintaining reasonable distancing, outside of one of East LA’s oldest and best known bakeries. El Gallo Bakery was established in 1949 by Mexican immigrant Magdalena Martinez-Huerta, whose father ran various food businesses in Guadalajara in the late 19th century. As The Eastsider reported, the bakery is now run by Maria’s son Jesus Gabriel Huerta and his children. He said the business has adapted to changing habits due to COVID, including adding pre-packaged products for ease of purchase.

El Gallo’s current location at 4546 East Cesar Chavez, in the Belvedere neighborhood, is not far from its original location, torn down for the construction of the 710.

Two seminal events in the history of Chicano Movement that took place in East LA were added last month to the National Register of Historic Places. The Chicano Moratorium March (December 20, 1969) and the National Chicano Moratorium (August 29, 1970) “had a profound effect on the larger Latinx population in Los Angeles… [and] their ideas and outcomes galvanized a new outlook on Latinx civil rights across the country,” wrote the Los Angeles Conservancy, which promoted their nominations. Among key sites along the marches’ routes included in the nomination are El Barrio Free Clinic and the Silver Dollar Cafe.

A man killed Monday afternoon in a single-vehicle crash at the border of East Los Angeles and Boyle Heights has been identified as 60-year-old Everardo Palma. The Eastsider reported that the crash occurred shortly before 4 pm near Hubbard and Indiana, not far from Stevenson Middle School. It was unclear from initial CHP reports if the vehicle hit either a pole or a wall.