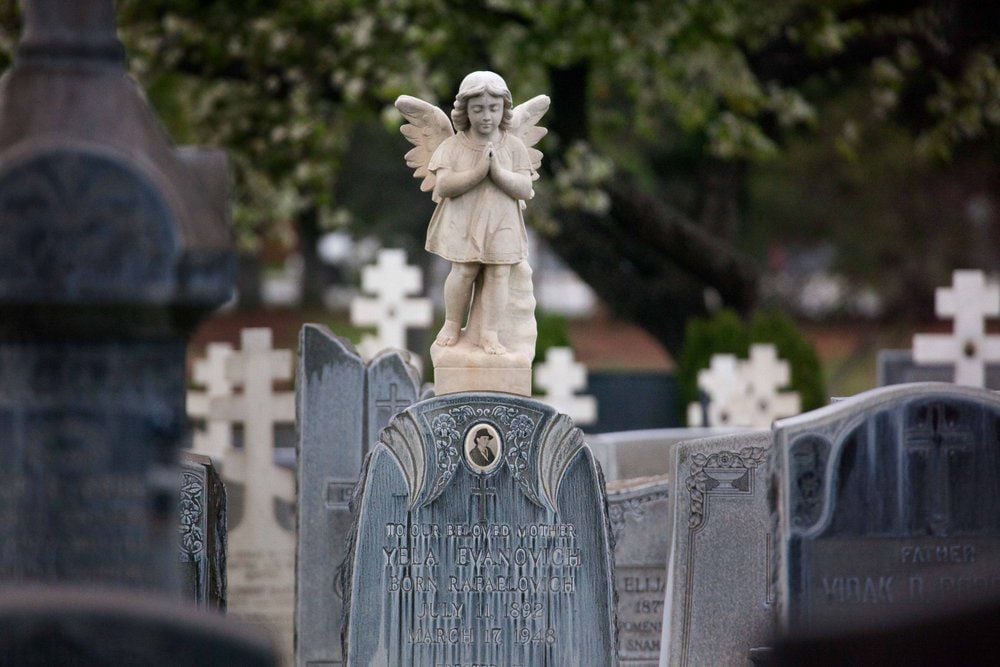 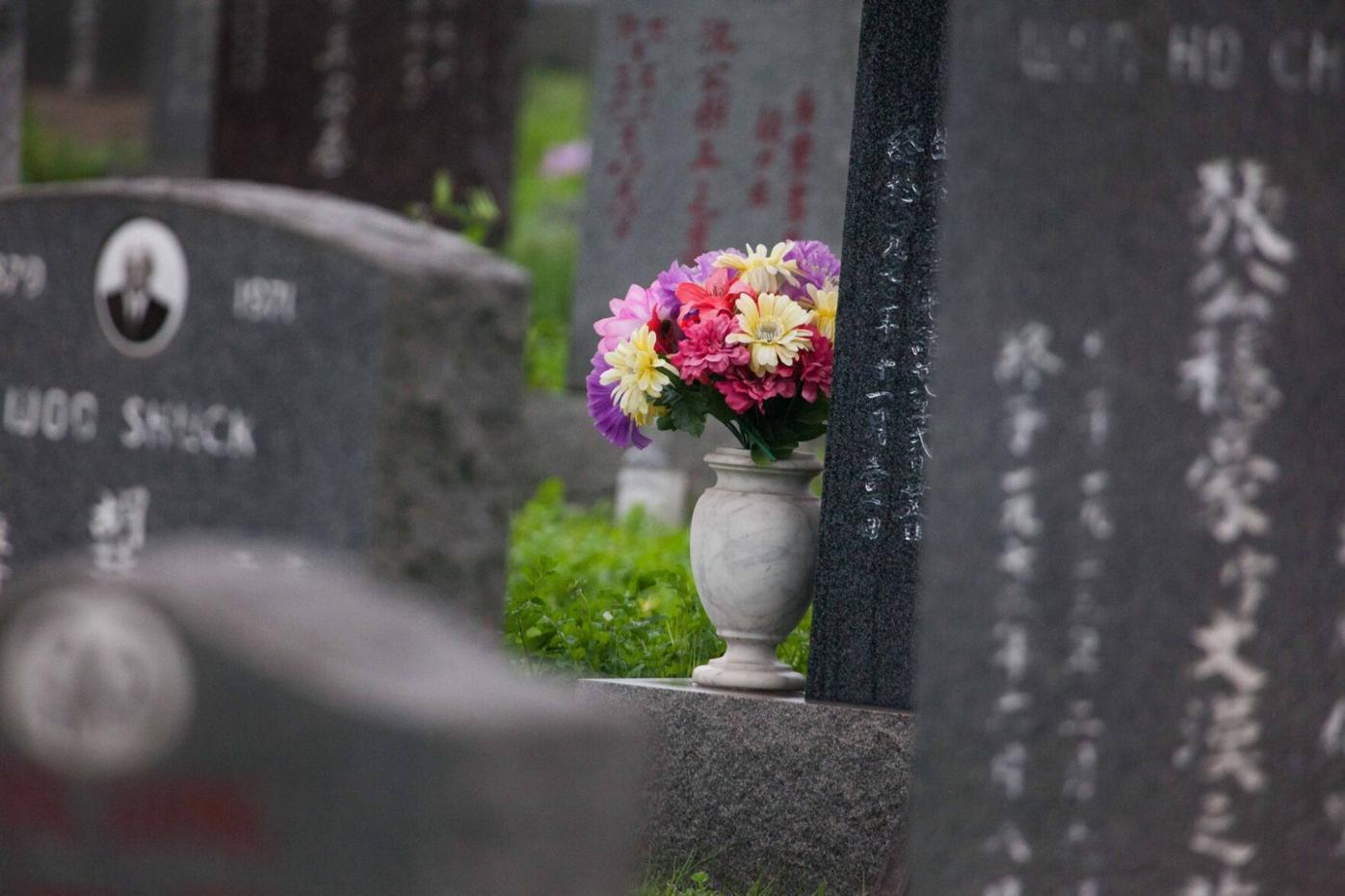 The Chinese Cemetery opened in 1922.

In this issue, we look at the burial grounds built over a century ago by the ethnic communities that once called East LA home. We have an update on the fire that destroyed the Nuevo Amanecer housing development. And we've got a nice place for you to get your much-needed flu shot.

Behind chain link and wrought iron fences, the tombstones of Chinese, Russian and Serbian immigrants, Mexican Catholics, Eastern European Jews and others can be seen for more than a mile along Eastern Avenue.

Welcome to East L.A.’s Cemetery Row. Here, between Olympic Boulevard on the south and Second Street on the north, there's a unique concentration of burial grounds, including the Chinese Cemetery, four  Jewish cemeteries and the largest of them all, Calvary Cemetery.

There may be no better way of exploring East L.A.'s rich and diverse history than visiting these graveyards. While many were built because of racist and discriminatory practices, they're a testament to the variety of ethnic and religious groups that found homes and formed communities in East Los Angeles.

Just in time for Halloween and Día de los Muertos, local historian Schmuel Gonzales, better known as Barrio Boychick, will be conducting a tour of three of the ethnic cemeteries next Sunday. The three-hour visit promises to delve into the facts and folklore of a cluster of small burial grounds between First and Second Streets, surrounded and separated by the 60 and 710 Freeway interchange.

Here’s a brief history of these three:

The Serbian cemetery was built in 1908 for a community of immigrants, mostly from Montenegro, Vojvodina and Hercegovina. Mostly bachelors, the Serbian immigrants first settled on Bunker Hill, but as they began to marry and start families, they looked east for a place to settle down. Once a member of the community bought land in East LA, others followed. A church and community hall were built right after the cemetery, and the area became the center of the Southern California Serbian community.

In recent years, the Serbian Cemetery has also acquired some notoriety as the home of a small flock of roosters and hens that happily roam the manicured lawns, fed and taken care of by the cemetery’s groundskeeper.

On the other side of Second Street, the Russian Molokan Cemetery was built as a burial ground for members of a Christian sect that separated from the Russian Orthodox church in the 17th century and began migrating to America around 1905 to escape religious persecution. Many of them settled in Baja California’s Valle de Guadalupe, becoming Spanish-speaking wine producers, but the majority settled in East Los Angeles, close but separated from a larger enclave in Boyle Heights.

Many of the East LA Molokans were farmers and shopkeepers, but some of them worked as extras in Hollywood movies and were active in a successful strike for better wages. Like many other groups, the growing Molokan community was eventually displaced by freeway construction. The Molokan cemetery in East LA is now overshadowed by a larger Molokan cemetery in the City of Commerce.

A much larger final resting place on the other side of the 60 Freeway, the Chinese Cemetery at Eastern and First Street is an important marker in the history of the Chinese American community that began forming in Los Angeles in the 1850s. They were barred from burial at any location except a potter's field at Evergreen Cemetery in Boyle Heights. There, families had to pay $10 per plot.

When the county acquired the potter's field in 1917 and began running out of space, it displaced the nearly 900 Chinese buried there, compensating each family with $2 per body. Around that time the Chinese Consolidated Benevolent Association bought the East LA site to establish its own cemetery, which officially opened in 1922 and is where some of the displaced bodies were eventually buried.

As LA County continued reopening businesses this week, new East LA cases climbed at a steady pace, with the number new daily cases averaging about 22 for the last two weeks.

A free flu shot clinic will be held from 1 to 4 pm. on Oct. 15 at the East Los Angeles branch of the County Library. Vaccines will be made available to people 6 months of age and older. No health insurance required. The local branch is one of eight LA County Library locations that will hold the free clinics over the next few weeks, in conjunction with the Department of Public Health. Go here for details.

Nearly half a dozen storefronts were destroyed or heavily damaged by a Sunday night fire on the south side of Whittier at Arizona. According to the County Fire Department, the blaze originated around 8:20 pm at Casa Olympic, a former popular discount outlet. Flames burst through the roof of the unoccupied building, but no injuries were reported.

The cause of the fire was under investigation Tuesday. It was unclear from news reports if Casa Olympic was still in operation, but other businesses destroyed by the fire included a small driving school and a jewelry store.

Sunday’s Casa Olympic blaze happened less than three weeks after a suspected arson engulfed the nearly complete Nuevo Amanecer affordable housing project at First and Rowan. On Tuesday, the developer of the 61-unit project said a juvenile had been arraigned in connection with the fire.

East LA Community Corp. president Manuel Bernal said 13 families living near the construction project who had been displaced by the fire were being assisted by the Red Cross -- and that ELACC is continuing raising funds for them through its donation page, which does not specifically mention the blaze.

“We have removed all the physical hazards, the streets are clear again, and local businesses have re-opened," said Bernal's statement. "We are now in the process of removing debris and working with our insurance company, relevant government agencies, and project partners to assess what we need to begin rebuilding.”

Volunteers are needed at three upcoming Sunday morning cleanups organized by the community-based City Terrace Project. The first is this Sunday, Oct. 11, with subsequent cleanups scheduled for Nov. 8 and Dec. 6. Those interested are asked to gather by 9 am in front of the City Terrace Library, 4025 East City Terrace Drive, and bring their own broom and face mask.

The cleanup will continue through 11:30 am. Hand sanitizer, gloves, trash bags and drinking water will be provided. Participants at Sunday’s cleanup should be ready to sign waivers for pictures and video shots that will be taken for documentation.

A report by LA County Inspector General Max Huntsman released Monday accused Sheriff Alex Villanueva of promoting a "code of silence" around secret societies within his department. The report specifically calls out the deputy group identified as the "Banditos," saying that about 30 members of the clique disrupt day-to-day operations at the East LA Sheriff's Station by creating tension between deputies who are members and those who are not.

"Substantial evidence exists to support the conclusion that the Banditos are gang-like and their influence has resulted in favoritism, sexism, racism and violence,'' the report said. Villanueva refuted the findings of the report, claiming it left out important facts and was politically motivated.