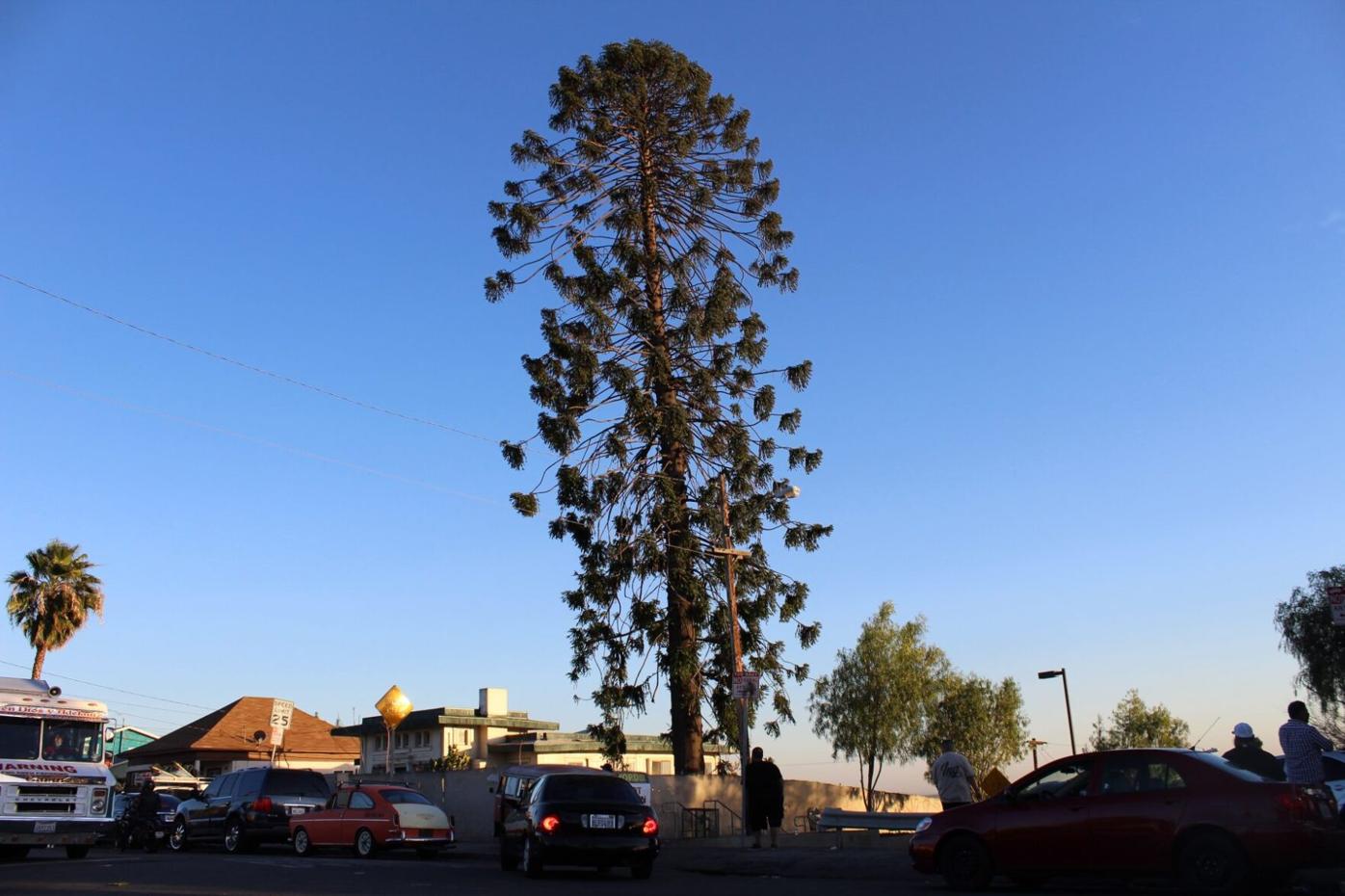 El Pino is a bunya pine, which are native to Australia. 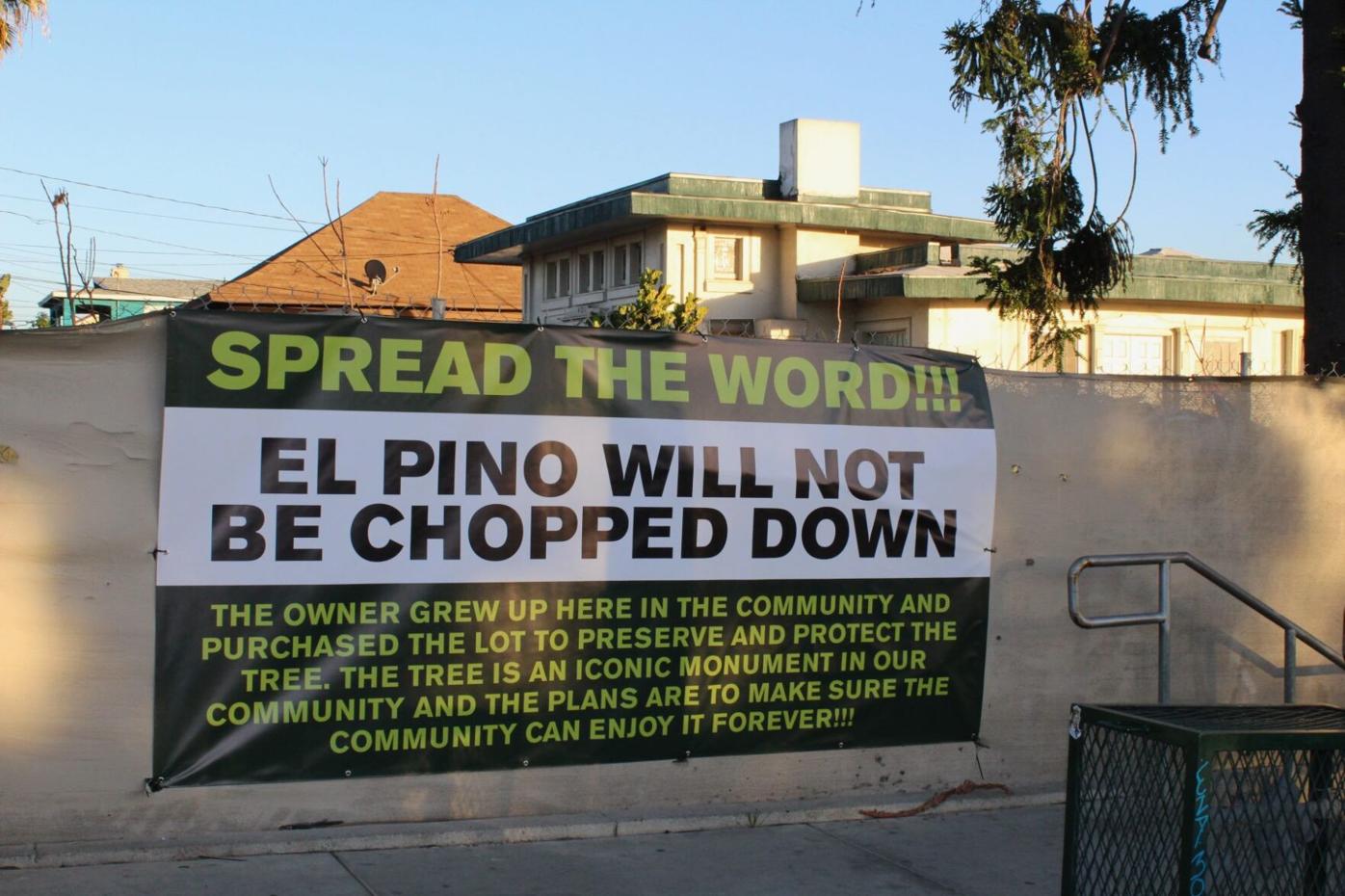 In this issue: We dig into the roots of a rumor about East LA’s iconic pine tree. The LA Times takes a deep dive into COVID in East Los. And we mourn the loss of Tierra’s Rudy Salas.

Early on in “Blood In Blood Out,” 18-year-old Miklo returns home from an extended stay in Las Vegas and meets up with cousins in East LA, who ask him where he wants to go first.

Minutes later, the cousins are in front of the towering pine, on a hill overlooking Boyle Heights and Downtown. “That tree is East Los to me,” says the character played by actor Damian Chapa. “It’s good to be home.”

If the 1993 film helped turn El Pino into a landmark, an end-of-the-year rumor transformed the bunya pine into a social media sensation.

In the last days of 2020, rumors claiming the revered tree was about to be chopped down spread across social media. Dozens of Instagram and Twitter posts lamented the tree’s impending fate. Locals and visitors rushed to tree that towers above a house on Indiana and Folsom to take selfies and videos.

“It’s a landmark that everyone in the community knows,” says East LA native Armando Velez, who took a framed picture of El Pino with him when he went away to college in 2001. “I was sad to hear that it was coming down.”

Now a TV cameraman and director of photography, Velez took a drone to shoot a tribute video the day after the rumor broke. It shows a number of lowriders taking a farewell drive to honor the tree.

On Dec. 31, County Supervisor Hilda Solís took to her social media to explain that a new property owner who planned to build a duplex on the lot had no plans to bring the pine down.

That owner is Art Gastelum, an East LA native, says he bought the property precisely because of El Pino.

“I never want anything to happen to that tree,” Gastelum told the LA Times in a story that traced the rumor back to a Dec. 28 post on a Mexico City Facebook page devoted to “Blood In Blood Out.” The author said it was meant as a prank for Día de los Santos Inocentes, a Latin American custom akin to April Fool’s.

For those who have not heard the rumors were a hoax, a new sign on the fence in front of the pine tries to set the record straight: “Spread the Word: El Pino Will Not Be Chopped.”

In East Los Angeles, the number of COVID infection cases surpassed the 18,000 mark on Monday, with more than 1,300 new cases reported in the first five days of the New Year.

Story takes a deep dive into COVID in East LA

A lengthy article published last week by the Los Angeles Times looked at how residents and businesses in East LA are coping with the grief and changes in behavior connected to the pandemic. “It has been 284 days since California first went into lockdown and here in East L.A. — a hot spot of infection — nearly every street corner holds some sign of the virus that has stolen more than 24,000 lives statewide, widened the wealth gap and rewired the rhythms of how we mourn, learn, work and worship,” reads a poignant paragraph.

The characters in the story include:

Tuesday would have marked the 72nd birthday of Rudy Salas, the late leader, co-founder and guitarist of the Chicano R&B band Tierra, which helped define the Eastside sound. Salas died Jan. 1 of unknown causes, The Eastsider reported. Salas and his wife, Joanna Alvarado, had just celebrated their 23rd wedding anniversary in Las Vegas. No memorial services have been announced; a Go Fund Me page started to help the family had reached just over two thirds of a $15,000 goal on Tuesday.

City Terrace mural to get a makeover

An early City Terrace mural by Chicano artist Willie Herrón will be renovated thanks to a grant announced this week by the LA Plaza Eastside Arts Initiative. “La Doliente de Hidalgo” is one of three public artworks that will share $25,000 in funding.

Herrón painted the sprawling mural on the front and side walls of what was once Farmacia Hidalgo, across the street from his childhood home, in 1976. The mural depicting Father Miguel Hidalgo, the father of the Mexican Revolution, was previously restored in 1990.

Authorities on Tuesday identified the 19-year-old motorist who was shot to death in East Los Angeles in the early hours of Monday, the first homicide reported in the neighborhood this year. Juan Pelayo of Los Angeles died at the scene of the shooting, which was reported just before 3 a.m. in the 1200 block of South Hicks Avenue. CHP officers who responded to a call of a traffic collision discovered the man in the driver seat of a vehicle, unresponsive and suffering from multiple gunshot wounds to the upper torso, they said.

The deadliest week of 2020 in LA County were the seven days between June 29 to July 5, when 29 homicides were reported, according to a Los Angeles Times story. The first homicide of that week took place in East Los Angeles.

In the early hours of June 29, 32-year-old Eddgar Perez got into an altercation with another man at a car wash at Union Pacific and Vancouver. Pérez drove off after the fight broke up, but the other man waited for him at a nearby alley where he pulled his car out suddenly and forced the victim to stop, then shot him four times. The homicide was originally reported as a crash.

Perez was one of 18 murders that took place in East LA last year, according to the LA Times Homicide Report.