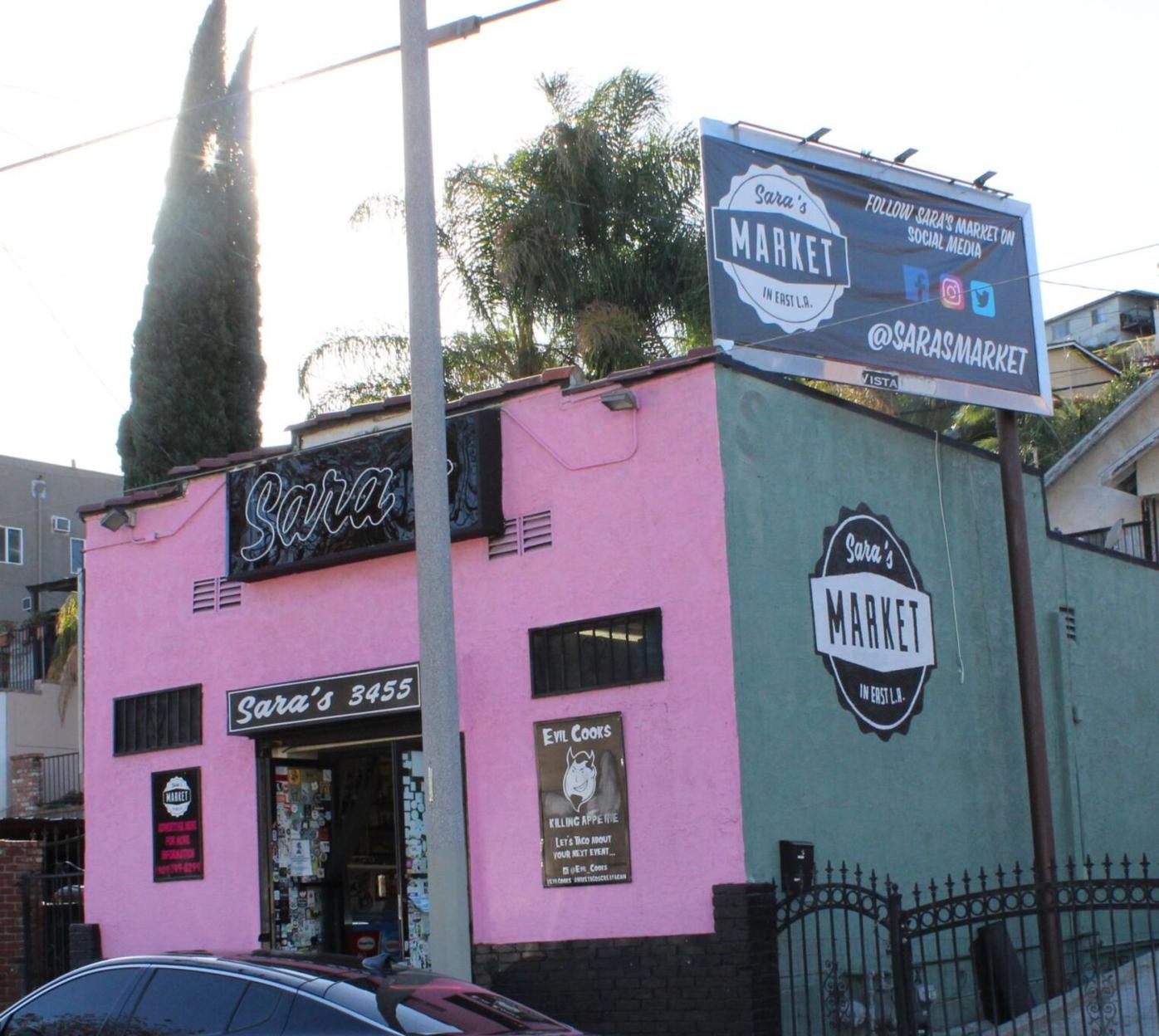 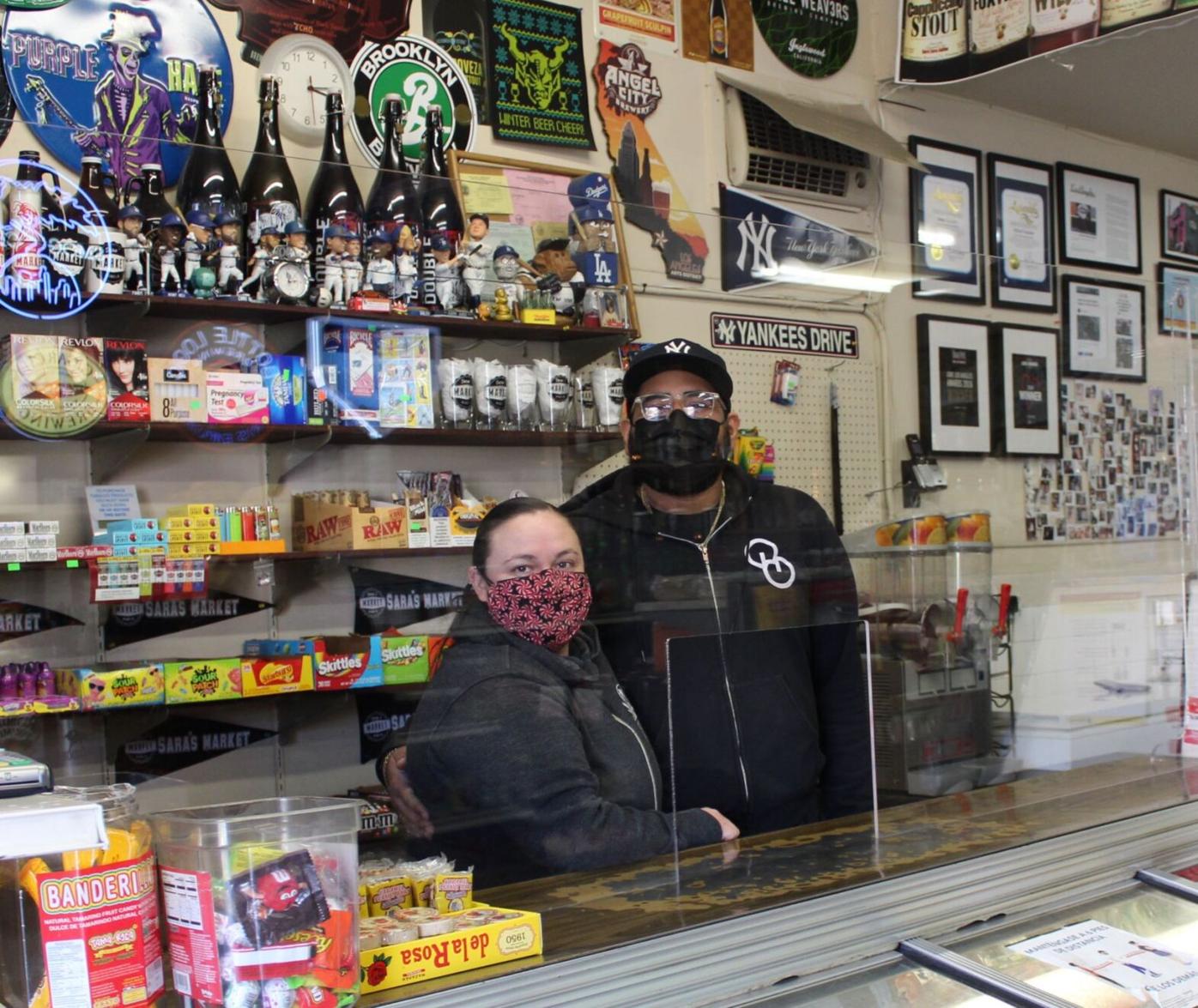 In this issue: We look at how a nightly food vendor pop-up at Sara’s Market in City Terrace  has attracted customers -- and county authorities. We also hear from a restaurant owner who’s unsure of reopening his patio as pandemic restrictions are relaxed. And we tell you about a food giveaway at a local park this week.

The transformation of a 'tiendita' to foodie hotspot runs into trouble

When Sara Valdes and her husband took over her parents’ City Terrace tiendita seven years ago, their plan was not to convert the business into a hotspot for foodies. All they wanted was to provide a healthy alternative to chips, sodas and typical neighborhood store fare.

“Our main goal was to be able to provide other options,” said Valdes, whose family has owned the small market for over 60 years. “We picked up from where my parents had left it off,” she said. “We haven't taken anything out of the market, we’ve just been adding.”

Her great uncle Pedro Martínez first ran it as Hilda’s Market; he passed it on to her parents, who renamed it. When they retired, Sara and her husband, Steven, took over.

They added a selection of craft beers and wines, high-quality meats, organic tortillas and a variety of vegan choices. That raised Sara's Market profile beyond City Terrace  – and made it a social media darling.

Part of the strategy has also been to open up the front of the market facing City Terrace Drive to food vendors for nightly, pop-up shops. The couple figured the pop-ups would benefit fledgling businesses and increase their store foot traffic. It worked, even during the pandemic.

That was until two weekends ago, when county inspectors shut down Monterey Park’s Yellow Paper Burger as it was winding down service. As reported by Eater LA, enforcement agents dumped unsold food and left several clients with unfulfilled orders. The business was fined, purportedly for violating the County Health Officer order regulating outdoor dining.

Then, last Saturday, East LA chicken wing vendor The Wingman avoided a similar shut-down when a law enforcement officer drove by and said that public health inspectors would be showing up.

Valdes said she wasn’t sure of how the pop-ups were in violation of the order – or if a reversal announced Monday would allow for the return of the rotating vendors.

“We haven’t been able to speak to health authorities, don’t know what the guidelines are about vending,” Valdes said on Monday. The pop-ups were only offering takeout and selling mostly through DM orders, with a limited amount of walk-up sales.

The Valdeses already have a number of food trucks scheduled this week.

“We are advising them [of the situation] and leaving it up to the vendors,” said Valdes. “We want to back up the community and back up the vendors 100 percent.”

With infections and hospitalizations trending downward, LA County authorities said they will allow outdoor dining to resume on Friday. But Supervisor Hilda Solís said that does not mean a return to “normalcy” and added that “masks, physical distancing and limiting activities are still key to getting out of this pandemic.”

For the first time since last November, we had a day when the number of new East LA cases was not a three-digit figure.

• 87 new cases were reported on Tuesday.

• A total of 22,803 cases have been reported since the pandemic began.

• In the last seven days, 29 new deaths were reported. Total number of deaths is now 279.

Not all East LA restaurants are able – or willing – to return to outdoor dining this Friday when a new Health Officer order goes into effect. “We just heard the news [on Monday], and we haven’t decided if we will reopen [for outdoor dining],” said Nick Devudian, co-owner of Sofreh, a Persian-Mediterranean restaurant on East 3rd.

Devudian said that reopening would be good for his business, but that he was still concerned about the growing number of COVID cases. “We’re not sure it’s going to be safe.”

After receiving an AA degree from East LA College, he began a four-decade career with the federal government. Guillen also began coaching, first as a founder of the East LA Bobcats Pop Warner team, then during separate stints as assistant coach at both Garfield and Roosevelt. He also coached at East LA College under another local football legend, Al Padilla – who passed away last year. After several years of retirement, Guillen returned as assistant coach to Roosevelt from 2017 to 2019.

Food giveaway at Saybrook this week

The Los Angeles Regional Food Bank will distribute free food to those in need Thursday at a drive-up event at Saybrook Park, 6250 Northside Dr., from 9 a.m. to 12 p.m. Recipients are being asked to enter the park from Olympic Boulevard and to remain in their vehicles at all times. No one will be allowed to line up before 8 a.m. No eligibility is required; face coverings are required and there will be no walk-up service, because of COVID precautions,

A 36-year-old “at risk” man who had been reported missing was found in less than 24 hours, the Sheriff’s Department said on Tuesday. A day before, authorities released a bulletin saying Richard Vasquez, who suffered from depression, had last been seen around 3 pm Monday on the 5400 block of Dewar Ave. No details were offered on how or where he was found.

There were 13 cars stolen in East LA in the last seven days, according to Sheriff’s data on CrimeMapping, with a cluster of six incidents occurring in the small area between the 60 Freeway and Whittier Boulevard and west of Downey Road. A smaller cluster of 4 cases happened in the neighborhood between Whittier and Olympic, just East of Arizona. Five cars were stolen on Wednesday (Jan. 20) and four on Thursday (Jan. 21). There were two vehicle break-in burglaries reported during the same period – both on Thursday.