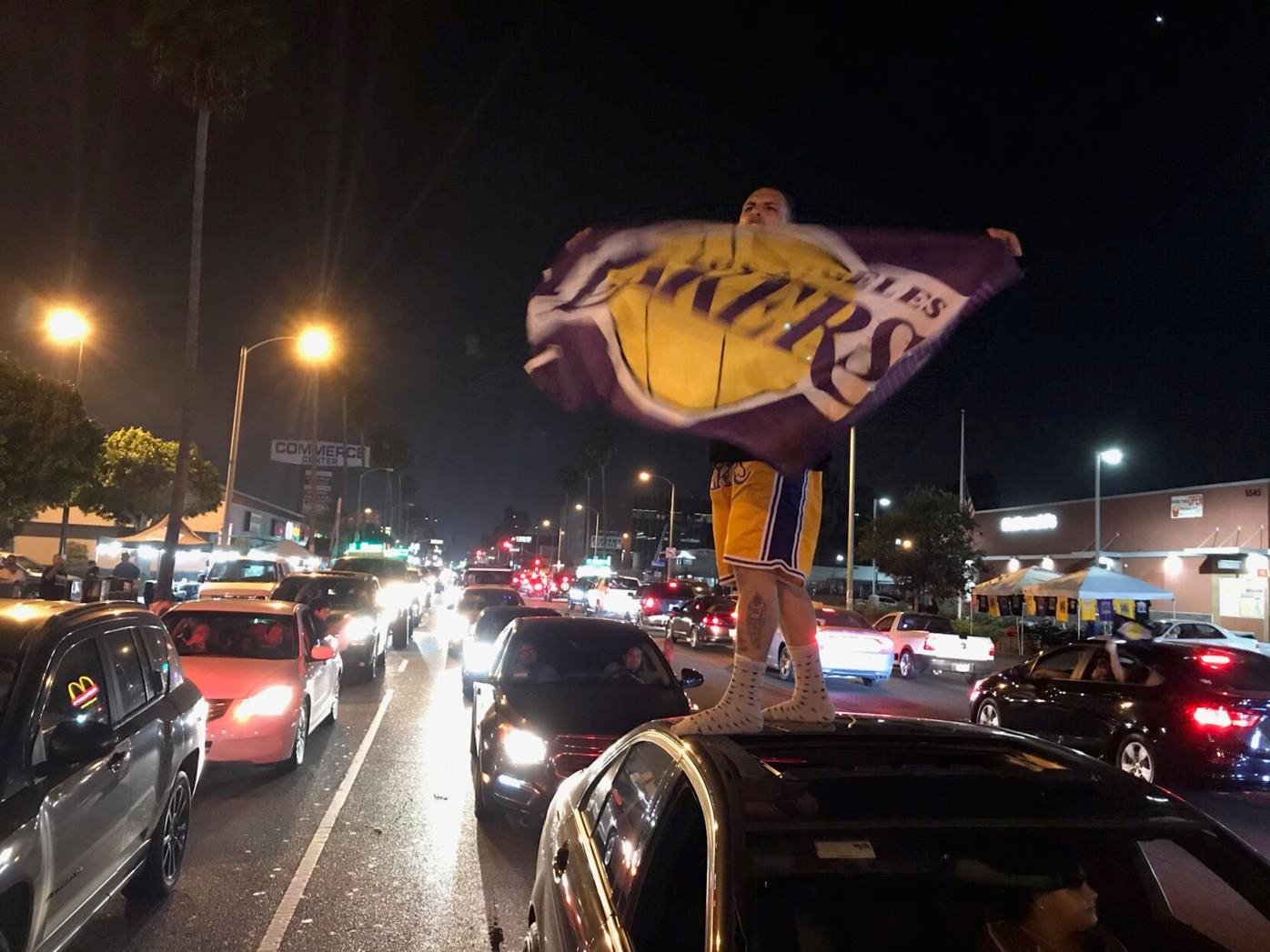 Whittier Boulevard in East L.A. was jammed as Lakers fans celebrated the team's 17th NBA championship after defeating the Miami Heat. Thanks to Aurelio Jose Barrera for sharing his photo. 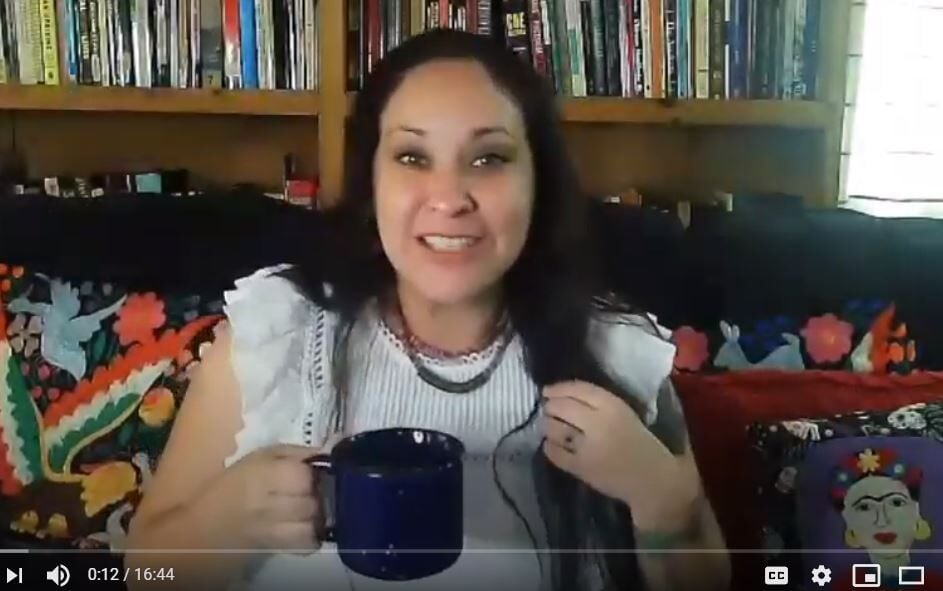 In this issue, we meet a City Terrace teacher who builds community on her YouTube channel. We get a peek at Galaxy star Efraín Álvarez’s East LA home. And we return to Whittier Boulevard for one more win for the purple and gold.

A teacher from City Terrace makes connections over YouTube and coffee

A local high school teacher has found a way of turning her morning coffee break at her City Terrace home into an opportunity to build community with her students and their parents during the pandemic.

With her morning YouTube video journal called Community Couch Time, Guadalupe Carrasco Cardona is able both to help her online community and address her own fears and anxieties. The show has proven therapeutic, allowing her “to get a lot of things off of my mind.”

Cardona was teaching ethnic studies at the Roybal Learning Center near Downtown LA when students and teachers were sent home in March amid the coronavirus outbreak. Soon after, she started her YouTube channel, La Trenza, and began reading and recording children’s books.

“It was cool because those books were helpful for people who were either teaching little kids or had little kids that were stuck at home,” says Cardona, who enlisted her own children and husband, actor and musician Raúl Cardona, to add music and sound effects to the storytelling. “It allowed the students to create things based on what they were seeing us create at home.”

Cardona continued teaching her high school students via Zoom. But soon she discovered that the sudden shift to online learning, and the circumstances brought on by COVID, were taking a huge toll on many of her students.

That’s when she decided to create a way of staying in touch with her students that went beyond the daily Zoom lessons.

“I wanted to build my relationship with them,” she said. “So that's when I came up with Community Couch Time.”

At first, it was just Cardona sitting at her couch with her morning cup of coffee, sharing an anecdote or story. Sometimes, she would take her camera out to nearby locations, like City Terrace Park, and discuss community landmarks and murals.

As Cardona became comfortable with the format, she says students began opening up to her in ways that they couldn’t in the open format of the Zoom classes.

“I was getting really beautiful personal responses," she said. Some students asked for help based on her daily journal question.

“Because they could watch it when they wanted and they weren't having to respond publicly [in class], it made them more comfortable," she said. "And because I was sharing my own personal [struggles], I was able to build a relationship with them.”

Cardona started hearing from students whose families were going hungry, or whose parents did not have enough masks to go to work safely. She and her husband began responding, at times delivering the needed supplies to the students’ homes.

While Cardona is not teaching this semester –- she is serving as the school’s intervention coordinator -– she still relies on Community Couch Time to maintain the bond she created with her audience. In recent episodes, she has been joined by other teachers, and even some students, for a daily 10- to 15-minute chat on subjects ranging from the Chicano Moratorium to Día de los Muertos.

Following two possible spreader events on Sunday -- a pro-Armenia march and the Lakers' victory celebration -- county health officials urged attendees this week to get tested for the coronavirus.

In a statement, public health officials insisted that COVID-19 is easily spread among people who are "in close contact with an infected person." They called on anyone who spent time in a large crowd to get tested for the virus.

In “The Pride of East Los Angeles: The Efrain Alvarez Story,” the 18-year-old midfielder asks his parents, former meatpacking plant workers, what it meant for them to raise a family in the home they bought in 1992.

In the seven-minute clip, Álvarez walks over to the local park where he played as a kid and hit a makeshift goal in the playground. “They have every sport except soccer,” he says, adding that his plans for the future include building “the Álvarez Fields”, to give local kids a chance to play and learn the sport.

Where to drink, eat and chill in East LA

Some familiar spots show up in the recently published “L.A. Taco Guide to Eating, Drinking and Chilling East of the Los Angeles River.” Drinking places include Huerta Produce, 1689 N Eastern Ave., where locals go for their daily fix of raspados and biónicos, and City Terrace’s Sara’s Market, 3455 City Terrace Dr., where a wide selection of beers and wines have given it almost legendary status. For coffee lovers there’s Mystix Kafé!, a pop up bar that sets up on César Chávez between Gage and Record and serves an horchata iced coffee.

Suggested for eating are Thai Daily BBQ, a 20-year fixture at 3552 East Cesar E Chavez Ave., and a number of vendors that line up on the corner of César Chávez and Rowan and offer everything from Sinaloa-style mariscos to freshly fried donuts. With your appetite satisfied, the perfect East LA chilling spot is the East LA Civic Center park and lake at 4801 E 3rd St.

Fireworks erupted throughout the Eastside on Sunday night as the area celebrated the Los Angeles Lakers’ 17th NBA championship win. Social media posts showed purple-and-gold bearing celebrants gathering along Whittier Boulevard. The Los Angeles Times reported that the Sheriff’s Department shut down the commercial artery to keep the festivities from getting out of hand. No major incidents or arrests were reported, however.

A 23-year-old man died as a result of an apparent gang-related attack on Oct. 8 near the intersection of Bonnie Place and Sixth Street, just south of the 60 Freeway, reports The Eastsider. Authorities said the unidentified victim was found unresponsive at 7:45 pm and taken to a nearby hospital where he died from what appeared to be blunt force trauma.