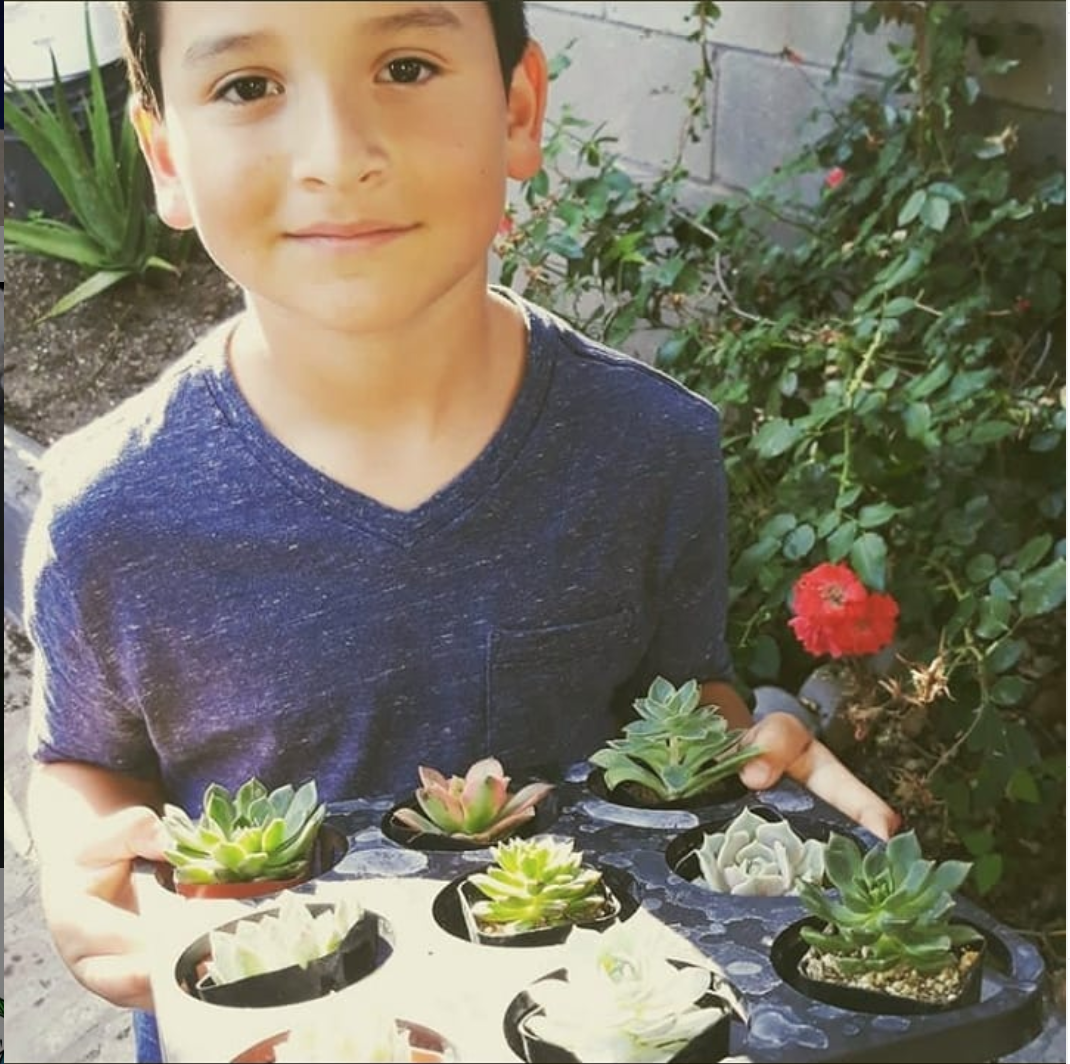 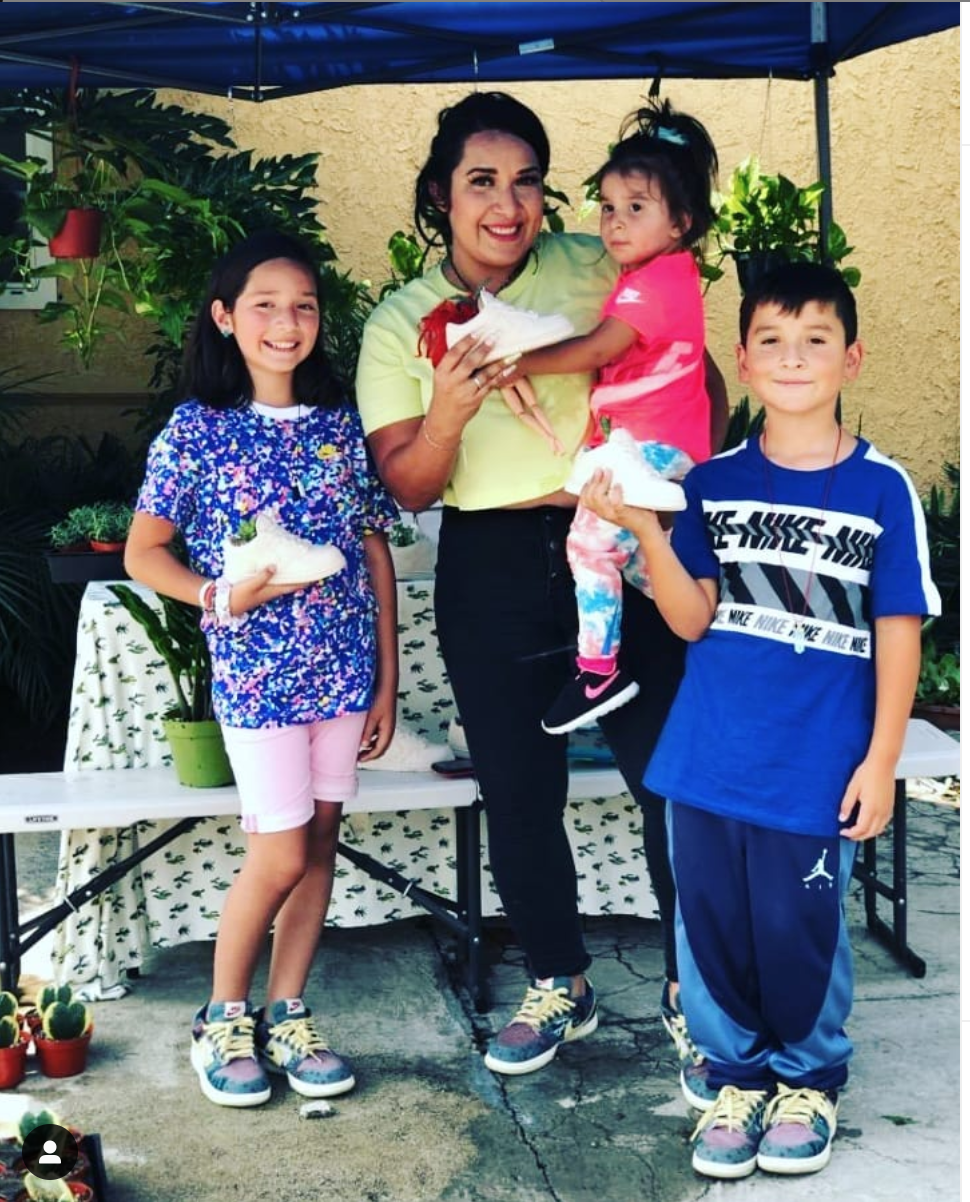 Aaron Moreno, his mother Berenice Pacheco, and his sisters Ayleen (left) and Alina. 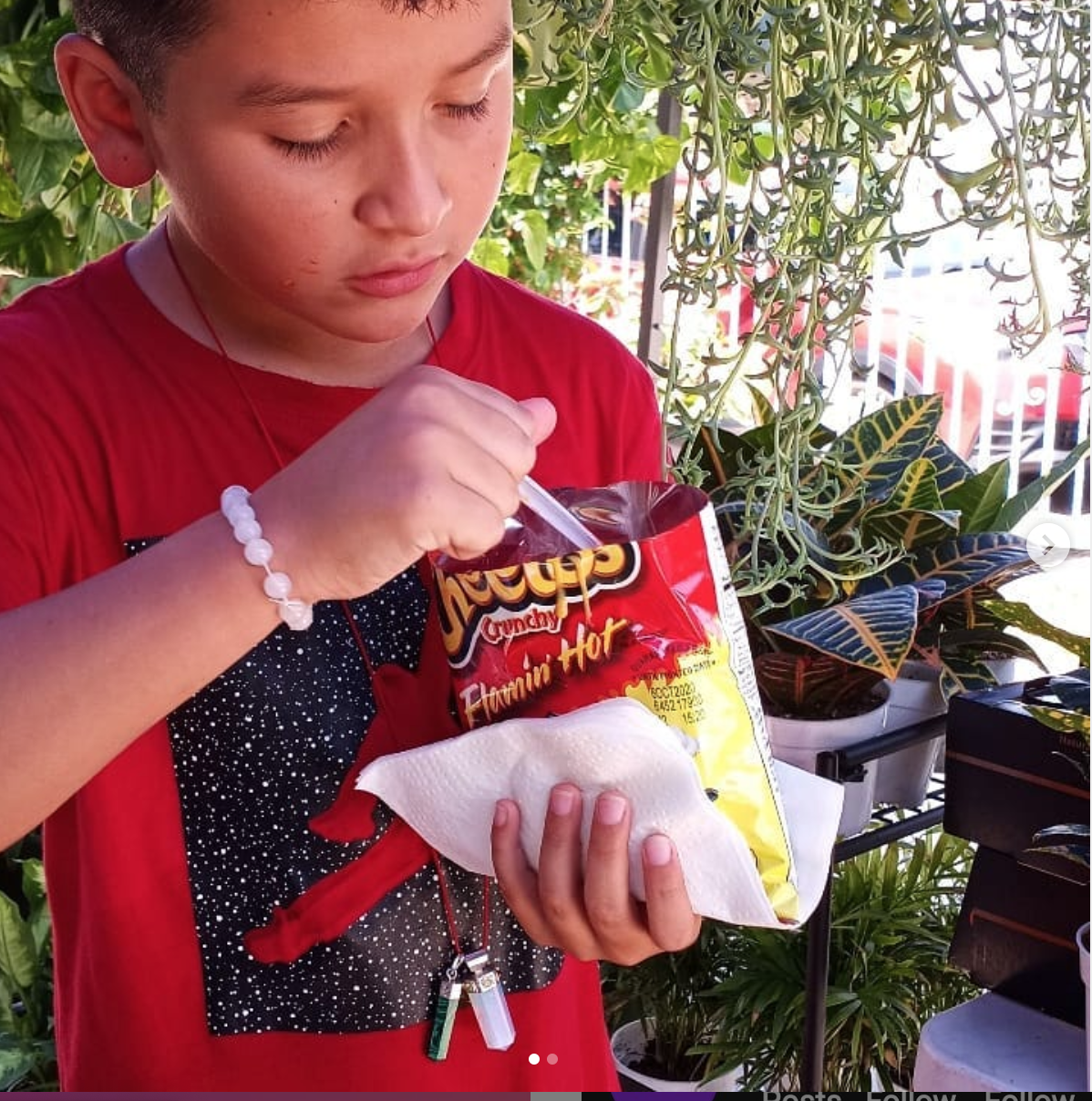 In this issue, we talk to an East LA third-grader who has given his family plenty to be thankful for; we report on the latest East LA high-speed pursuit; and we learn from a local politician to mind our Twitter posts.

A budding entrepreneur turned his family's life around selling plants

Aaron Moreno remembers asking his mother for money for his favorite snack: Flamin' Hot Cheetos. The mom, unemployed because of the pandemic, suggested instead that he use the money to buy something he could resell.

“My mom only had 12 dollars, so I tried to invest it wisely,” said the Hot Cheetos-loving third-grader. “We went to the flower district and bought all the succulents [we could afford]. From that we made 16 dollars, so we went and bought more plants and kept on investing it in plants.”

And that's how this eight-year-old entrepreneur started a business that has raised more than $50,000, attracted widespread media attention and helped support his family.

Aaron started the business out of a shed he shared with his mom and his two-year-old sister in the backyard of an East Los Angeles house. They carried the plants on the bus and sold them from their yard or on the street.

Then the mother created an Instagram account for Aaron’s Garden with a simple post in June: a photo of the smiling third grader, holding a tray of tiny succulents, and the caption: “8 year old boy trying to build a business.”

It wasn’t long before the Instagram account developed a legion of followers, and local media outlets wrote up Aaron's Garden. A family friend started a Go-Fund-Me account, which as of this week has raised more than $53,000.

“People started blessing us through the go-fund-me,” said the mom, Berenice Pacheco. “When we started our business, we were struggling, I didn’t have a purpose to wake up. Aaron’s Garden kept us busy, kept us motivated.”

With some of the money raised, Pacheco was able to buy a car and send for her oldest daughter, who went to live with grandparents in Mexico when the family fell in hard times.

Pacheco now has a part time job and the family recently moved into their own apartment, where the Rowan Elementary student is working to convert their garage into the new Aaron’s Garden.

Aaron and his mom said they expect to reopen before the end of the year, at their new home near Olympic and Downey.

Aaron’s entrepreneurial drive has rubbed off on his 10-year-old sister Ayleen, who now sells beauty and hair products on her own Instagram. “She’s trying to follow [his] footsteps,” their mom says. “He’s the influencer of the house.”

Pacheco says her story has inspired other families struggling during the pandemic. “People reached out to us and told us we changed their lives, we gave them hope.”

As for Aaron, he’s got goals beyond the blooming business.

“When I’m bigger I want to be a judge and work in the Supreme Court,” he said.

A divided Board of Supervisors upheld the health department’s order to shut down in-person dining at county restaurants for the next three weeks, despite questions about whether eateries were being unduly punished for the recent surge in COVID-19 cases. The order goes into effect tonight at 10 pm, and more restrictions appear to be on tap for residents and businesses – but it was unclear when a “targeted Safer At Home” order and further limitations on retail business would be placed.

Supervisor Hilda Solis, who represents East LA, voted in favor of the ban noting the number of cases and deaths in this community.

In East Los Angeles, the highest daily number of new cases since the start of the pandemic was reported on Monday: 115. For the second week in a row, the weekly average of new daily cases jumped to a new high of 67 – up from the previous week’s average of 41.

A tweet from Assemblymember Wendy Carrillo celebrating her election victory in November tipped Politico about the East LA's legislator’s attendance at the four-day Independent Voter Project conference with lobbyists at a luxury resort in Maui. The Twitter post dated Nov. 16 had a geolocation tag showing it was sent from Kihei, Hawaii. The conference raised concerns because of California’s rise in coronavirus cases and official warnings not to travel out of state. In a later Twitter post, the Democratic legislator said she went to learn “how we safely re-open our economy” and criticized the “continued contradicting and constantly changing information from Governor Gavin Newsom.”

The mother of an 18-year-old man shot to death by a Los Angeles sheriff’s deputy in 2019 praised this month’s election of George Gascón, who will replace Jackie Lacey as District Attorney. A progressive, Gascón has promised to reopen police shooting cases that were not prosecuted by Lacey. “So many people got involved and wanted to vote,” Leah Garcia told The Guardian. “A lot of the families I talk to – we’re tired of living in fear.”

Paul Rea was shot on June 27, 2019 during a traffic stop on Gerhart Avenue. In May of this year, Lacey’s office said it determined that the sheriff’s deputy acted in self-defense and that it would not take further action in the case.

The sheriff’s department says that it will have additional officers on patrol during the Thanksgiving holiday, looking for drivers suspected of driving under the influence of alcohol and/or drugs. Deputies will also be “actively looking for other unsafe driving practices – speeding, not wearing a seat belt, driving distracted – to make sure everyone has a safe holiday,” the department said in a statement. Additional patrolling will start today and continue through Sunday.

Another Monday, another high-speed chase

Exactly a week after a high speed chase ended with an arrest in East LA, police on Monday pursued an allegedly armed man who was driving erratically and dangerously through the neighborhood. KTLA reported that the pursuit began shortly after 5 in Boyle Heights, but authorities went into “tracking mode” when the driver became a threat to pedestrians and other drivers as he went through surface streets in East LA and Monterey Park. Helicopter footage showed the driver plowing through red lights, driving on the sidewalks and in bike lanes, and narrowly missing pedestrians and bicycles. TV helicopters lost track of the driver when he drove into a parking lot at Pershing Square in downtown LA – it was unclear if the driver was found and detained.

The shooting of an off-duty deputy City Terrace may have been motivated by a dispute at a party, The Eastsider reported. "Detectives are investigating reports that the assault was motivated by an earlier verbal altercation at a nearby birthday party between the suspect and one of [two other] occupants of the off-duty deputy's vehicle," the sheriff's department said in a statement. The injured deputy was the only person shot and treated for non-life threatening injuries.