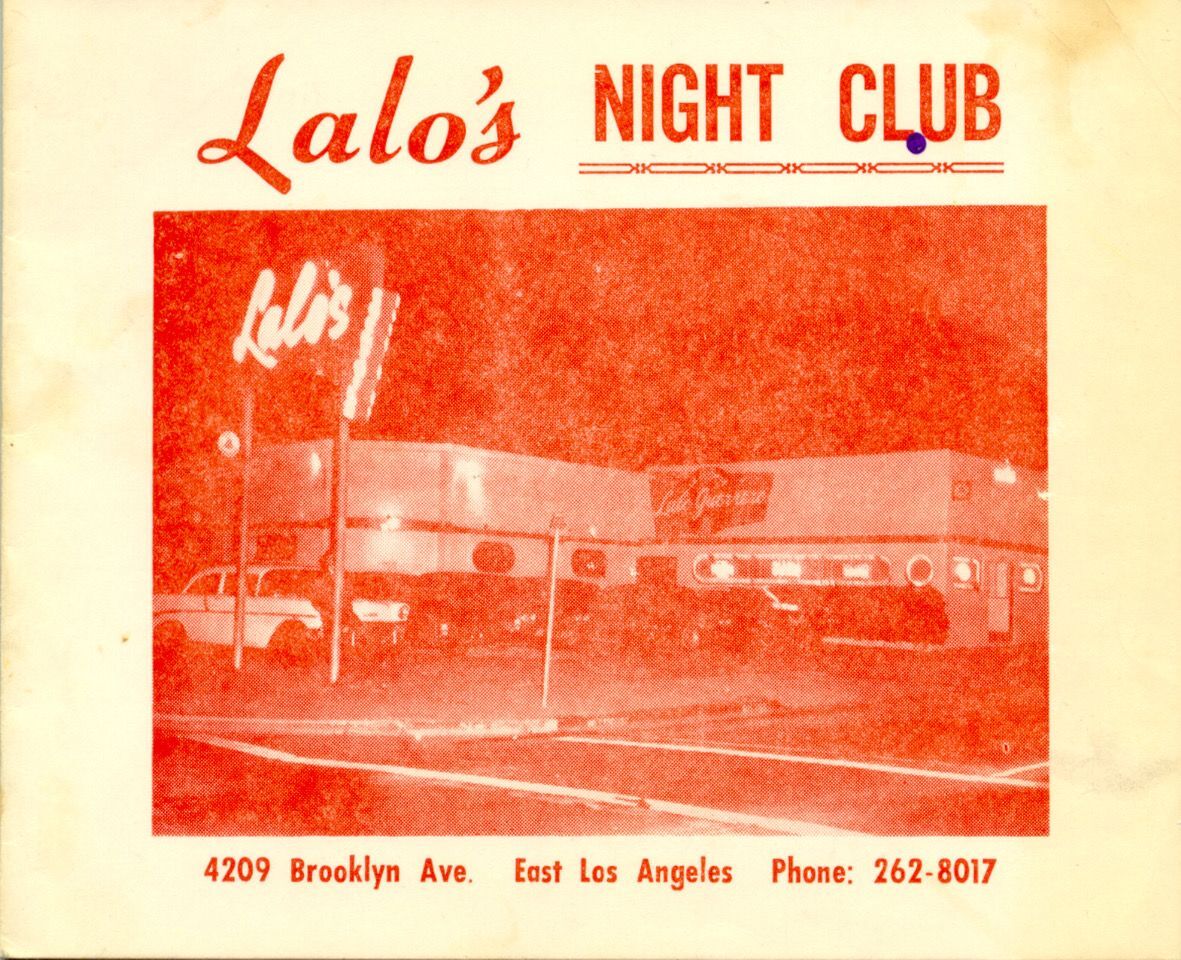 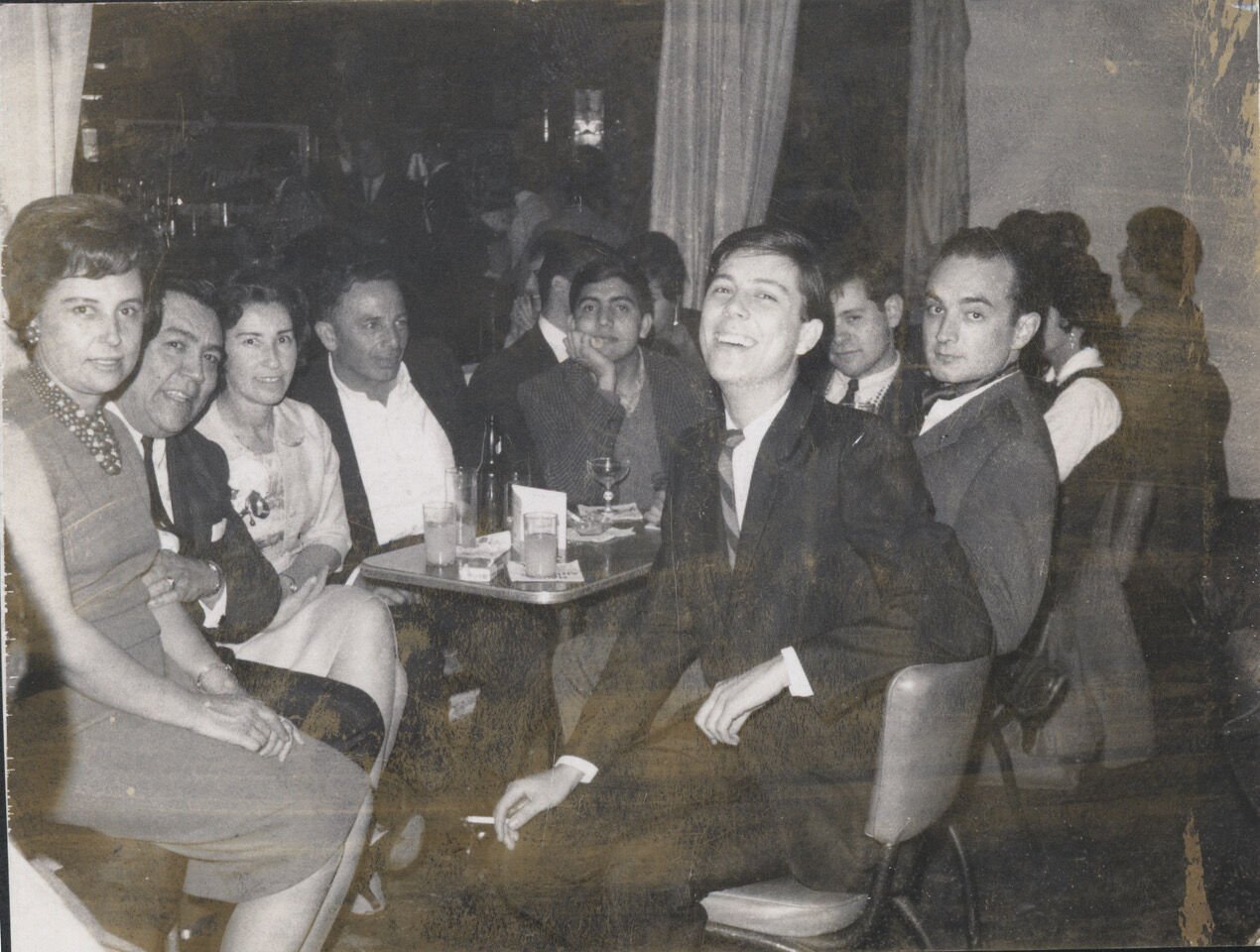 Dan Guerrero, third from the right, with a group of friends, including artists Carlos Almaraz and Frank Romero, at his father's club. 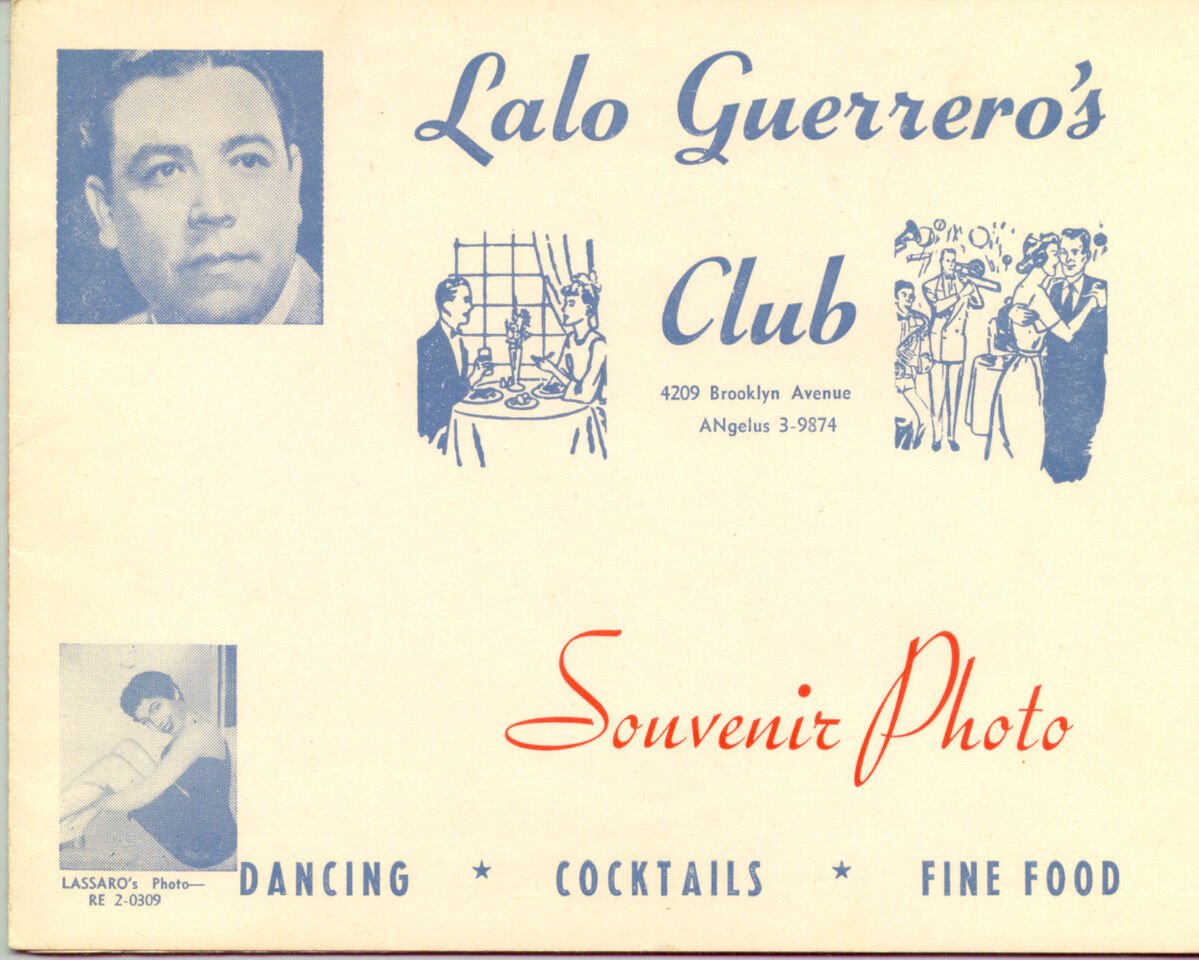 A look back at Lalo’s Nightclub, once ‘the place to go to’ in East LA

Few people who drive by a Pizza Hut on Cesar Chavez and Marianna today know that for a short period in the '50s and '60s, it was East LA’s hottest spot. The structure housed Lalo’s Nightclub, home to Lalo Guerrero, the father of Chicano music.

“Everybody went to Lalo’s,” recalled the musician and performer’s oldest son Dan Guerrero, a producer, writer and performer himself. “Celebrities from Mexico would come and they would go to Lalo’s. Local people, too.”

A black and white photograph of politician Ed Roybal on stage with the elder Guerrero attests to that statement.

Born in Tucson in 1916, Lalo began traveling to perform at Olvera Street in the 1930s. After marrying his high school sweetheart, the musician moved his family to East Los Angeles, where they eventually settled in a house on McDonnell Avenue.

Guerrero and his band would tour the Southwest twice a year. The rest of the time he would perform at The Paramount Ballroom in Boyle Heights.

In 1955 Guerrero had a huge hit with “The Ballad of Pancho López,” a parody of the theme song from the “Davy Crockett” TV series that sold half a million copies. It was one of a long string of songs that chronicled Mexican American life in the United States.

With the money from Pancho López, he opened his own club. “My father and mother decided, why are we making the Paramount people rich?,” Dan said.

Because they had no prior business experience, the Guerreros partnered with a Spanish man who ran other nightclubs. That turned out to be a disaster, and the Guerreros walked out of the deal. Lalo’s remained open, but without its namesake headliner, it flopped.

A few years later, the Guerreros decided to restart the club on what was then known as Brooklyn Avenue by themselves.

“Lalo’s, as we know it, opened Oct. 27, 1960,” Dan said. It was only open Friday and Saturday nights and Sunday afternoons - for tardedas. There was an admission charge and strict dress code. His dad entertained, his mother, Margaret, ran the club.

“The second they opened that door, that was it. You couldn’t get into that place. It was packed every minute it was open,” Dan said.

One of his favorite recollections is celebrating his 21st birthday in 1961 – the first time he was allowed at his father’s club. His friends Carlos Almaraz and Frank Romero, who became important Chicano painters, are seen with him in a picture from another visit.

Sadly the club closed in 1963, when his parents divorced and Lalo couldn’t run the place by himself.

Dan said it was hard to think of Lalo Guerrero’s legacy without evoking East Los Angeles and those years at Lalo’s.

“My dad was not only a [celebrity], people loved him,” he said. “Everybody felt at home at Lalo’s. It was the hub. It was short lived, but it was stellar.”

COVID-19 deaths continued to mount in Los Angeles County Tuesday, despite signs across the state that hospital admissions are leveling off. Health officials have warned that the apparent slowdown in people being hospitalized with the virus does not mean the dangerous surge that began in November has ended.

In East Los Angeles, the number of new cases increased by nearly 2,000 in the last seven days and surged past the 20,000 mark this week.

An East LA hospital had among the highest percentages of COVID-19 patients in LA County, according to a review of data published last month by the LA Times. According to federal data, 66% of the patients at East Los Angeles Doctors Hospital were suffering from COVID the week ending Dec. 24. By comparison, 43% of hospital patients countywide were COVID cases. The story concluded that facilities in “lower-income, densely populated and nonwhite communities have been hit hardest and face the greatest challenge in providing care” to coronavirus patients."

Grocery and retail drug store employees in East Los Angeles may soon earn an additional $5 hour if a proposed county ordinance gets final approval this month, reports the LA Times. The proposed ordinance would require employers in unincorporated county areas to provide so-called “hero pay” for the dangers they face amid the coronavirus pandemic. It would apply to employees of companies that are publicly traded or have at least 300 employees nationwide and more than 10 employees per store.

The four-part series “The Night Stalker: The Hunt for a Serial Killer,” premiering today on Netflix, focuses on LA County detectives who investigated a number of murders committed in the mid ‘80s by Richard Ramírez. The series culminates with his capture in the streets of East LA.

According to news reports from the era, after getting off a bus in downtown LA on Aug. 31, 1985 and being identified in Boyle Heights from his mugshot on the front pages of all newspapers, Ramírez ran into some East LA backyards and was beaten by neighbors on Hubbard Street before LAPD officers caught up with him. He was charged with 13 murders, convicted and sentenced to death, but died of natural causes in a hospital in 2013. The Los Angeles Times revisited the neighborhood where he was caught and talked to neighbors who witnessed the capture.

There were more than twice as many homicides committed in East LA in 2020 than there were in the previous year, according to the Los Angeles Times Homicide Report. It lists 9 homicides in 2019 and 18 in 2020. But the report has not yet been updated to include two December incidents: the Dec. 21 shooting death of 22-year old David Castillo and the Christmas Eve killing of a man shot on a driveway on Clela Ave. He was later identified as 30-year-old Daniel Rivera.

The tally of homicides is the highest since 2008, when 23 were reported in East LA.