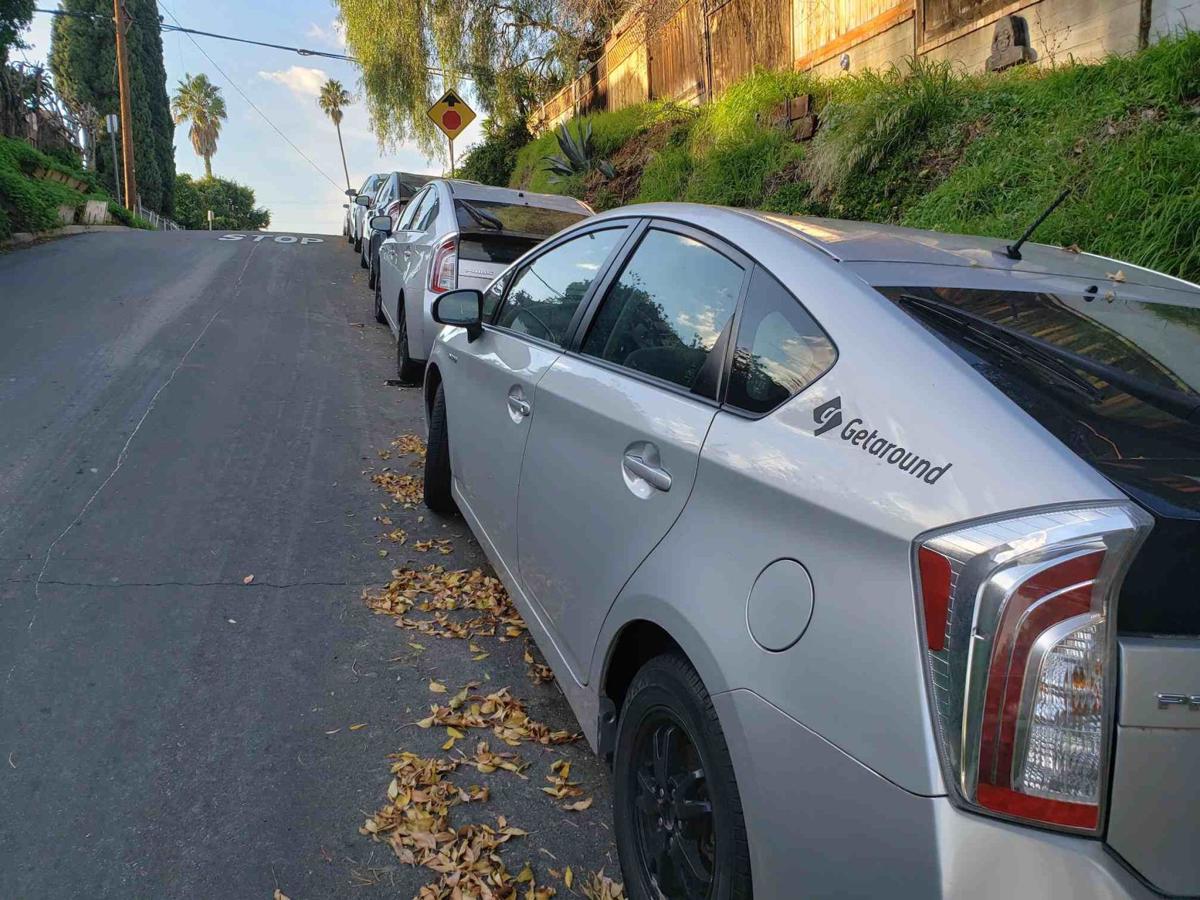 Three Priuses in a row with the Getaround logo, lined up along the the 2100 block of Montana. All had New York plates. 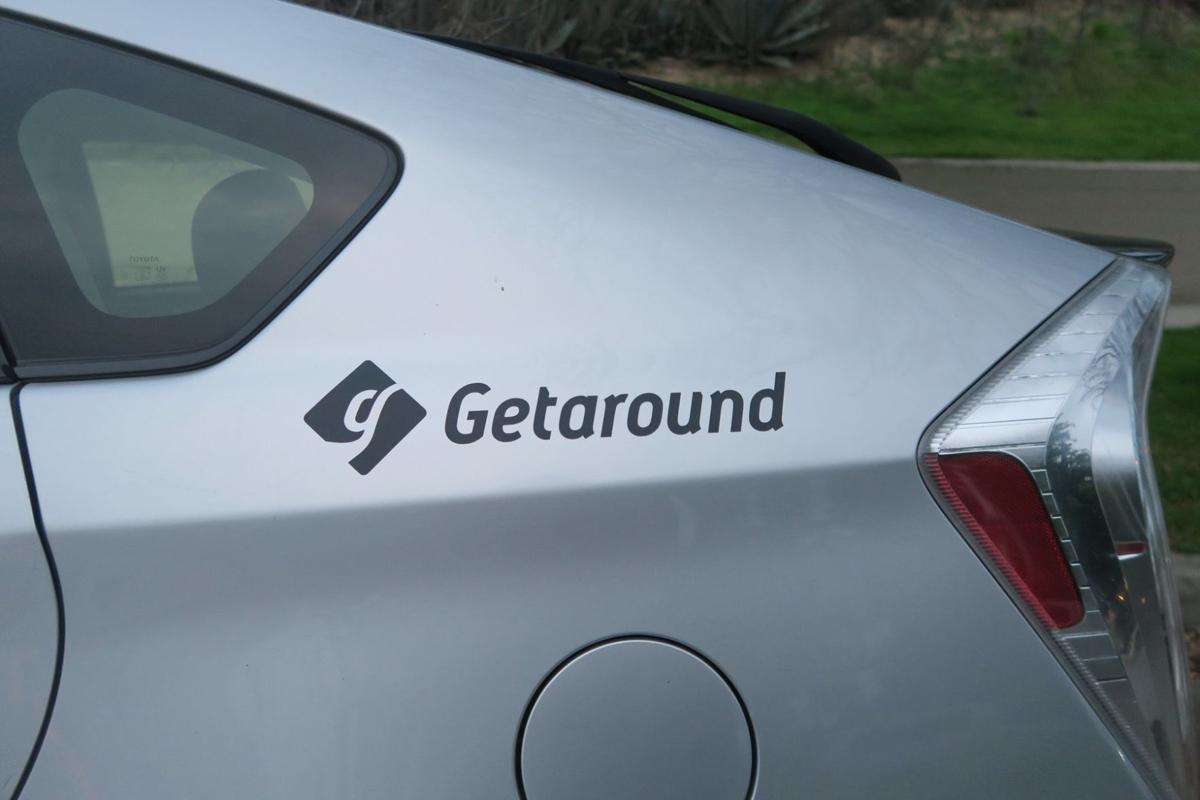 Echo Park -- A car-rental app designed to make it easier to share cars is also making it more difficult to find a parking space, according to residents.

A San Francisco-based company called GetAround has brought its car-sharing service to Los Angeles, allowing car owners to rent out their vehicles through an app. Renters use the same app to find the vehicles and unlock them using their phones.

While individual car owners can make their vehicles available, it also appears that vehicles are being brought in from other locations. Recently, three Priuses with GetAround stickers and black-on-orange New York state license plates were parked in a row in the 2100 block of Montana near Alvarado Street. They have also been parked on Berkeley Avenue, Bentown Way and Waterloo Street.

"Tonight a tow truck used my neighbor's address and dumped a car and while that was happening another car was placed here," said local resident Mark Anello on a recent Monday evening.

One woman who lives on nearby Reservoir Street said at one point there were half a dozen GetAround vehicles parked on her street. Someone tried dropping a vehicle in front of her house because her address was used as a drop off point -- even though she has not signed up with GetAround.

“Parking in everyone's neighborhood is already hard enough and now people are profiting off of using up residential parking,” said the woman, who did not want to be identified by name.

Similar complaints have been made in other parking-challenged neighborhoods as car-sharing services like GetAround and Turo spread around the country. In Chicago, residents complained after one man who rented cars through Turo parked 40 of them on one street.

The woman who lives on Reservoir and other residents have asked the city to help. But the response has been limited even though those who rent the cars do not appear to have the required permits to use city streets to rent cars.

"They are required to have business permits or they can be issued a citation,” said LAPD Officer Jesus Aispuro said about the rental cars. "The only problem for us is that I need to issue a citation to a person that is present. I have to enlist the assistance from our City Attorney in order to locate the business owners and mail them notices to comply with the city business requirements.”

Officer Aispuro confirmed that it's not legal to rent out cars from residential streets in this way, saying, “The city does not normally issue permits that would allow a business to operate like GetAround in a residential area."

GetAround has not responded to requests for comment or confirmation of facts. However, Anello forwarded a message he said he received from the service - showing a further possible complication.

"Our owners can set their own Home Locations," the message said, referring to the people who owned the cars that were available for rent, "and as such we don’t set the locations in which these cars get parked."

Some of the rental cars parked around the Echo Park/Silver Lake border have the GetAround logo on them, some do not, Anello said. On a recent visit, at least one other car in the neighborhood fit the description of an available GetAround vehicle, even though it did not have the logo. It, too, had a New York plate.

Officer Aispuro said he is forwarding his observations to the City Attorney. "The City attorney has other options at their disposal," he said.

Awwe, white hipsters trying to get everything their way as always. Deal with it, other neighborhoods all over LA do.

End free street parking. Every home has a garage, every apartment a parking lot. There are 3.3 parking spots for every car in Los Angeles and 16% of the city’s area is devoted to car storage... and yet we allow people to store their private possessions for free on public property — as long as those possessions are cars and as long as they’re not being used as homes (which we actually need more of).

My EP home does not have a garage

Are you joking? My entire Echo Park neighborhood block does not have driveways or garages.

Well, first, Officer Aispuro clearly is not the authority, considering him saying, “The city does not normally issue permits that would allow a business to operate like GetAround in a residential area." Has he not noticed all the various scooter operations with their scooters all through the residential neighborhoods, left and started from in front of anyone's home? And the city is OK with this. Has he not noticed how the city has handled AirBnB for so many years and its illegal hotel operations in residential zones?

Another very serious danger of the cars is that, not being a regular rental operation with a location where the cars are picked up and dropped off means they are not being checked for problems between renters. Are the brakes any good any more, or do they have a brake fluid leak? Is a gas line leaking onto the hot engine? Are the tires bald? Are their any electrical shorts that might cause a fire? Do the blinkers and stop lights work? Nobody's checking.

That's a very good point and sort of what actually happened. At least on two occasions the cars were towed to my street by AAA as they were not working properly. Strangely, they were not towed to the car owner's home. I spoke to one customer and they were frustrated by the inconvenience and unreliability.