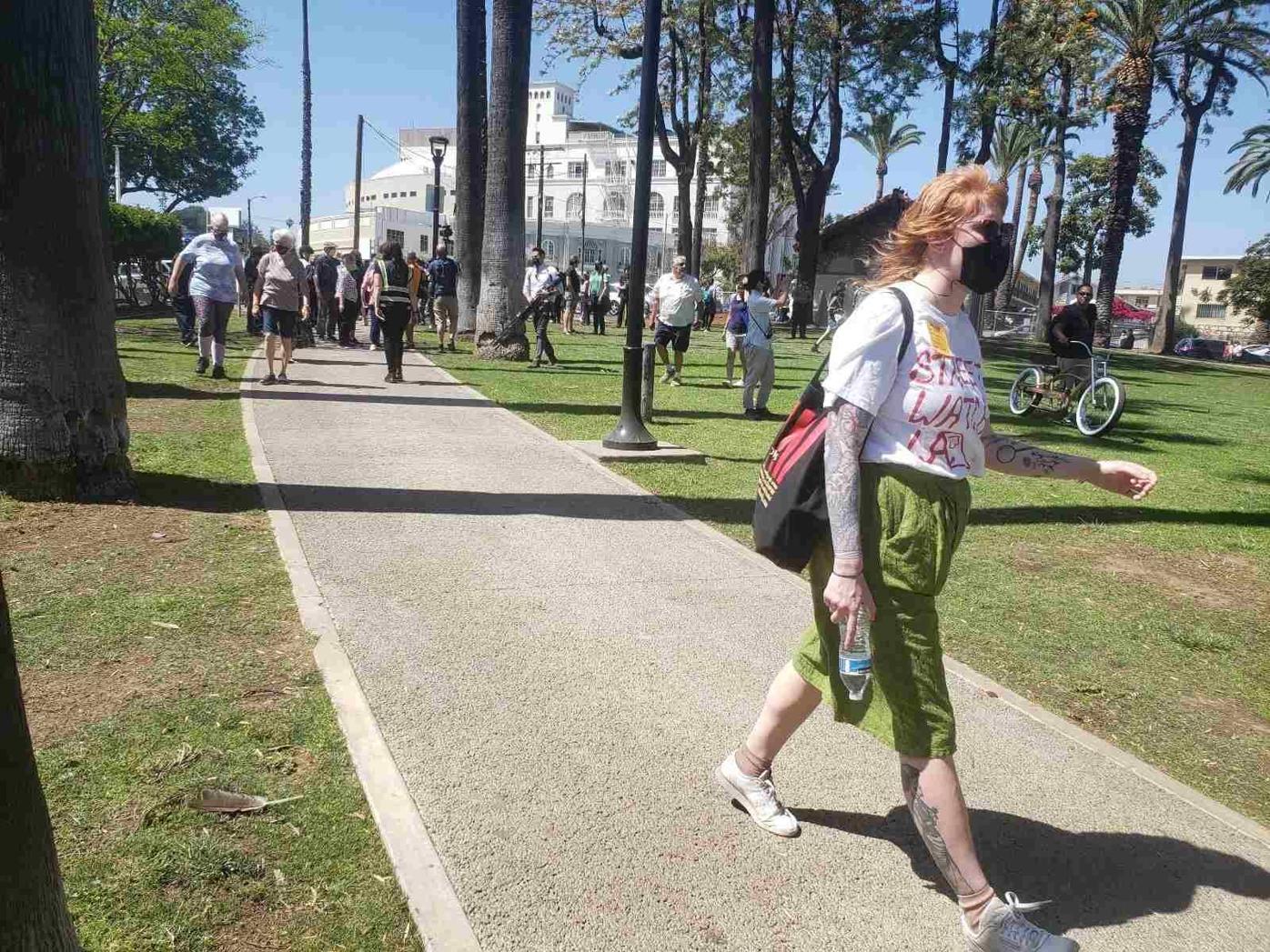 A crowd poured into the park grounds shortly after the reopening. 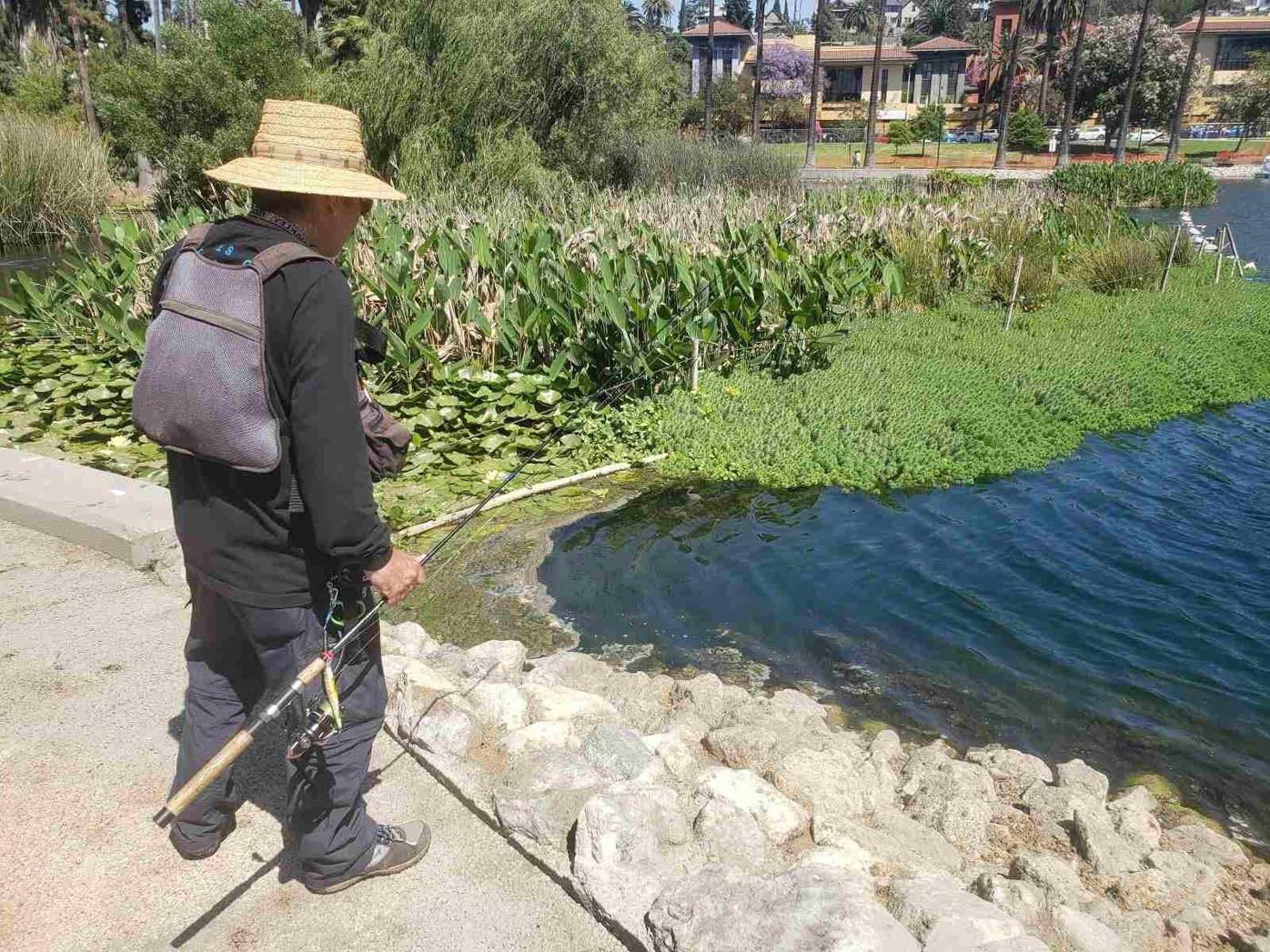 Anglers wasted no time to get to their favorite fishing spots at Echo Park Lake. 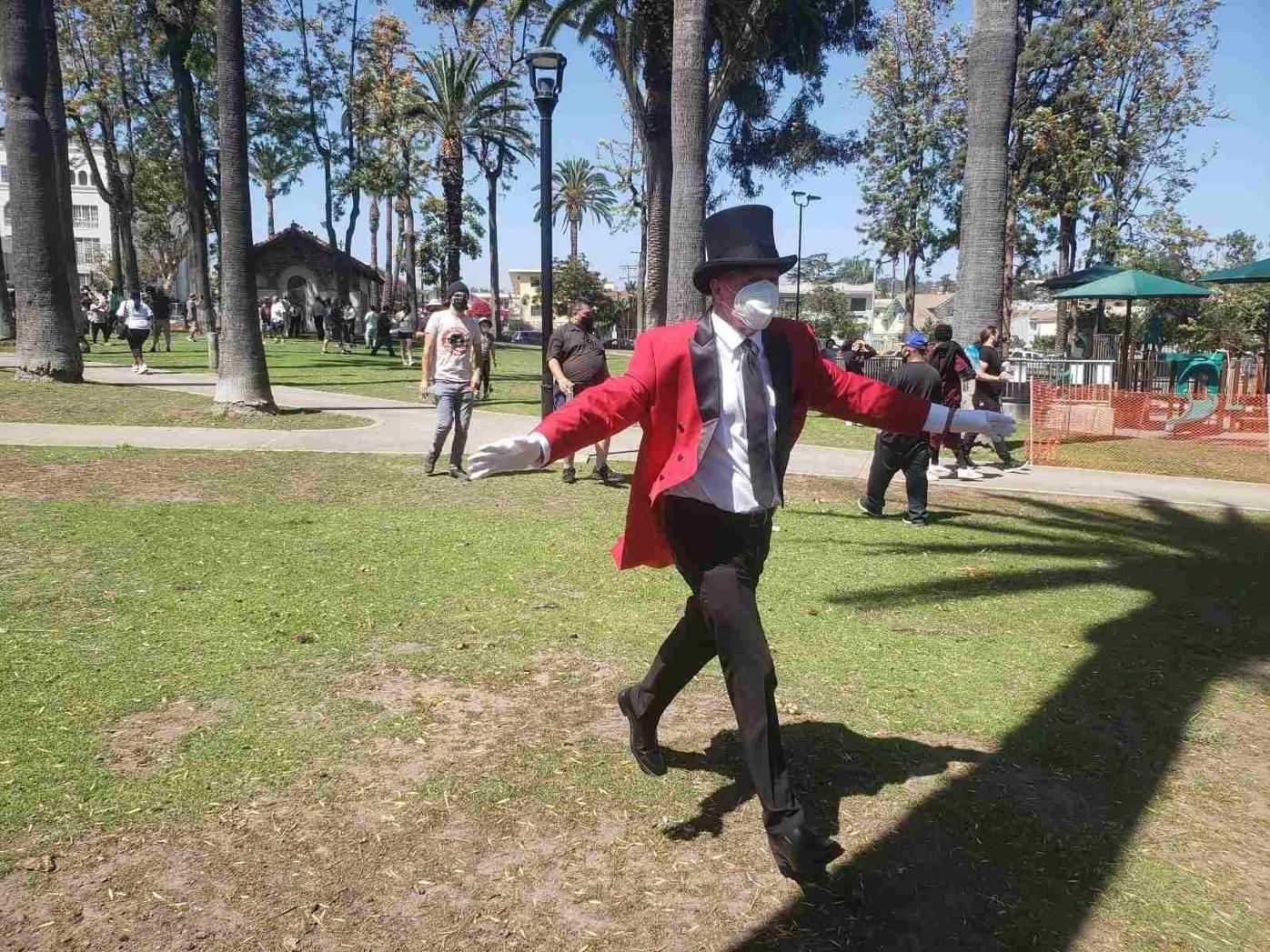 Dressed up for the reopening of Echo Park Lake. 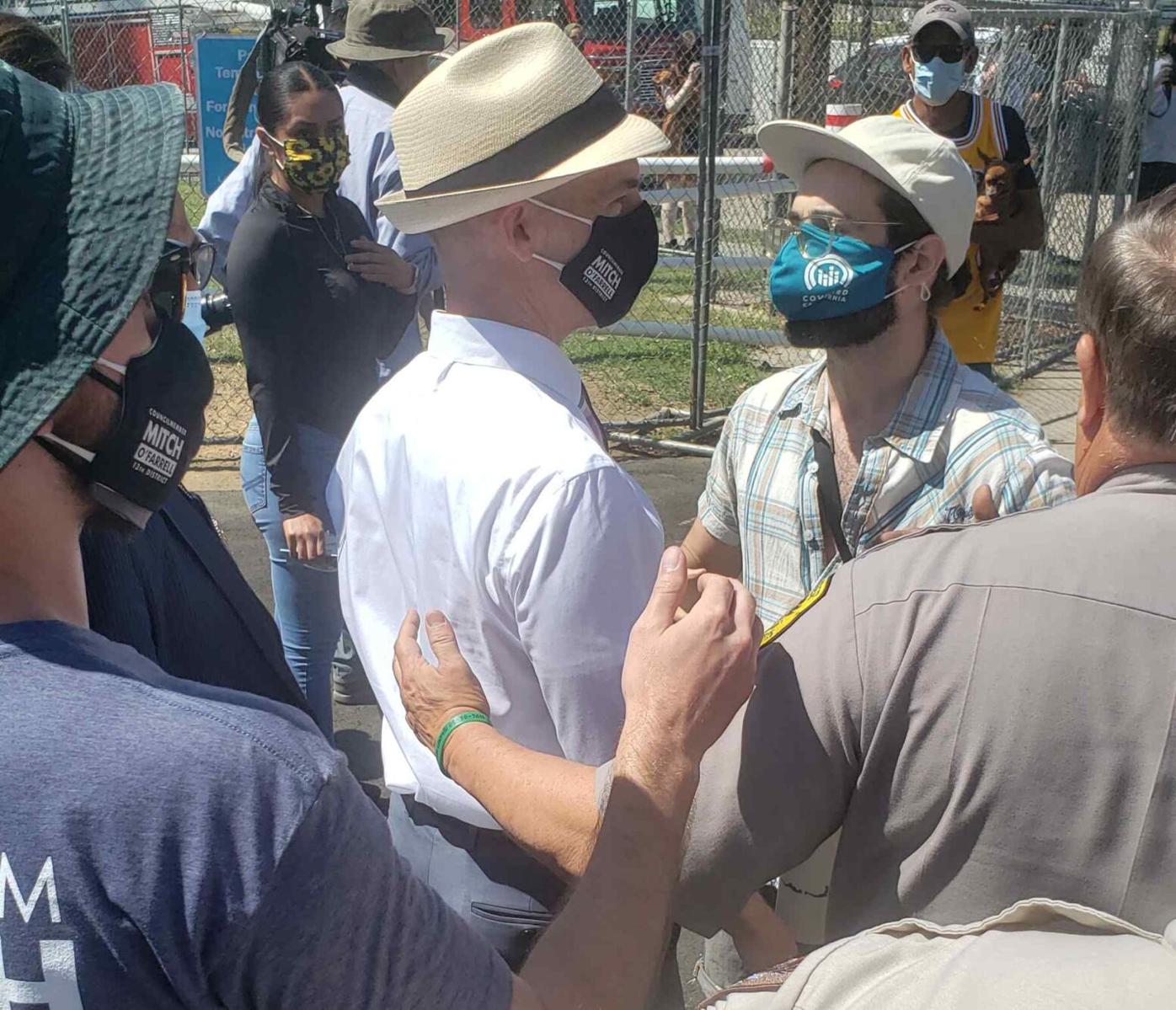 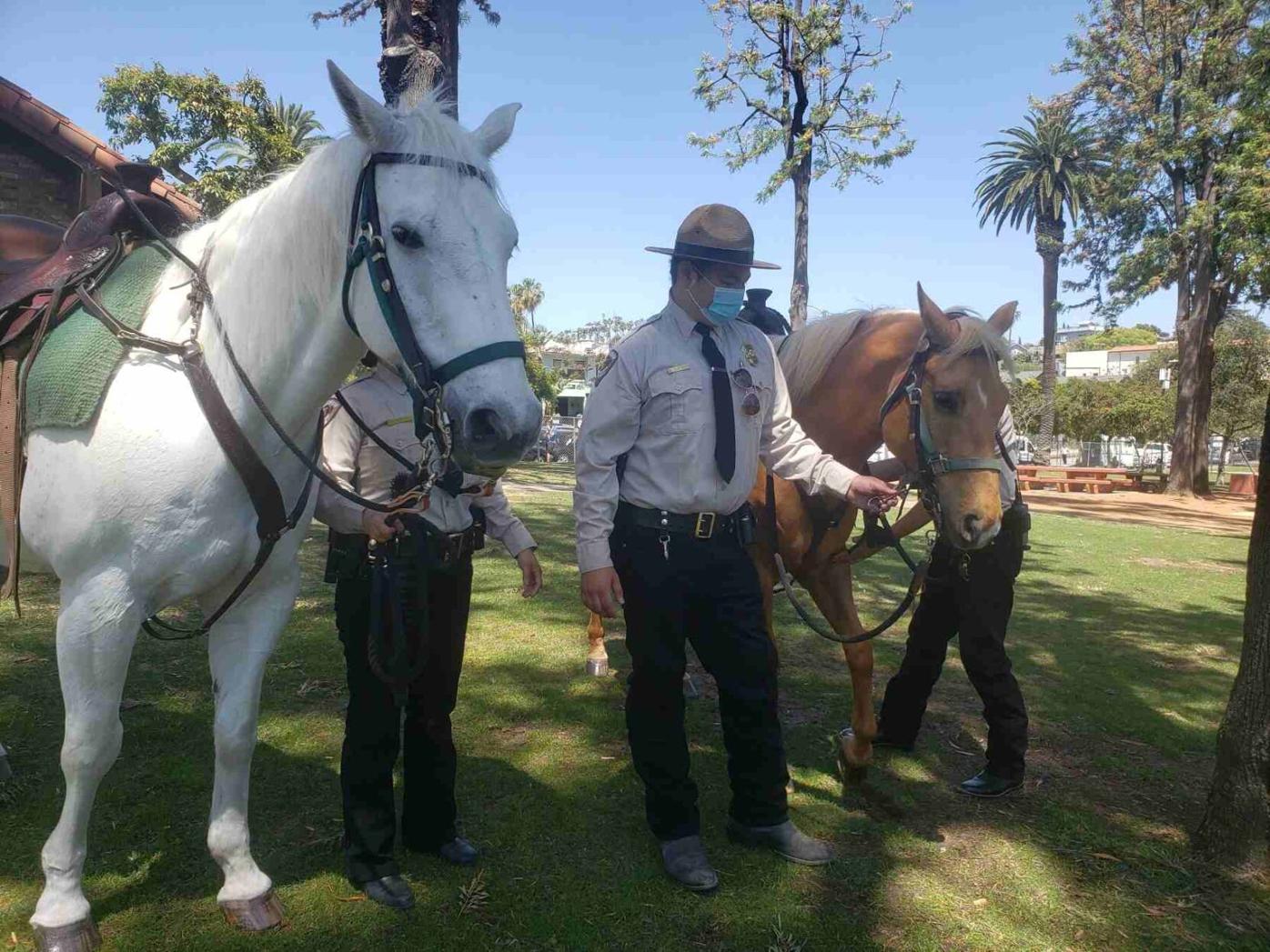 Park rangers on horseback will be patrolling Echo Park Lake on Wednesdays and weekends. 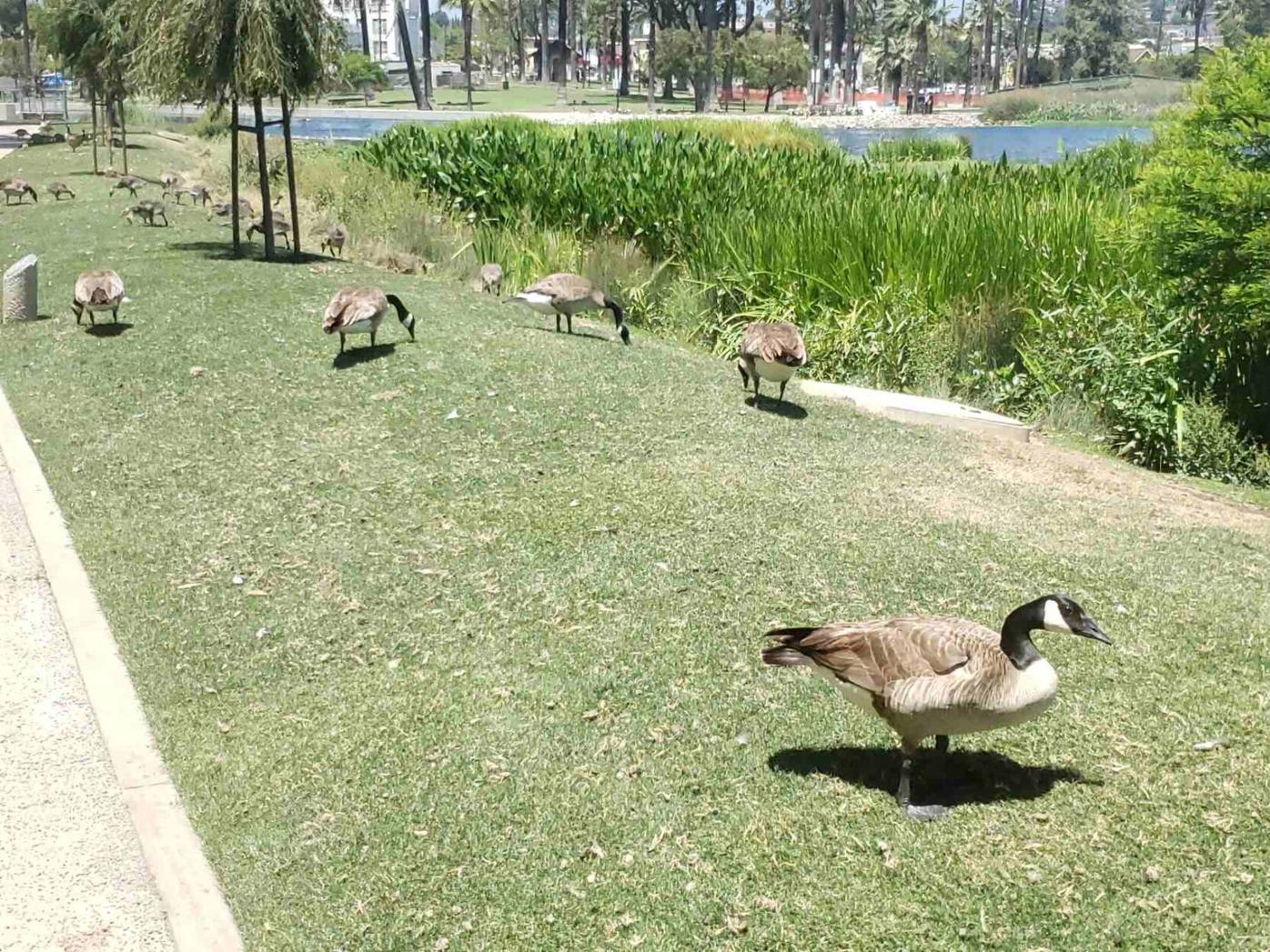 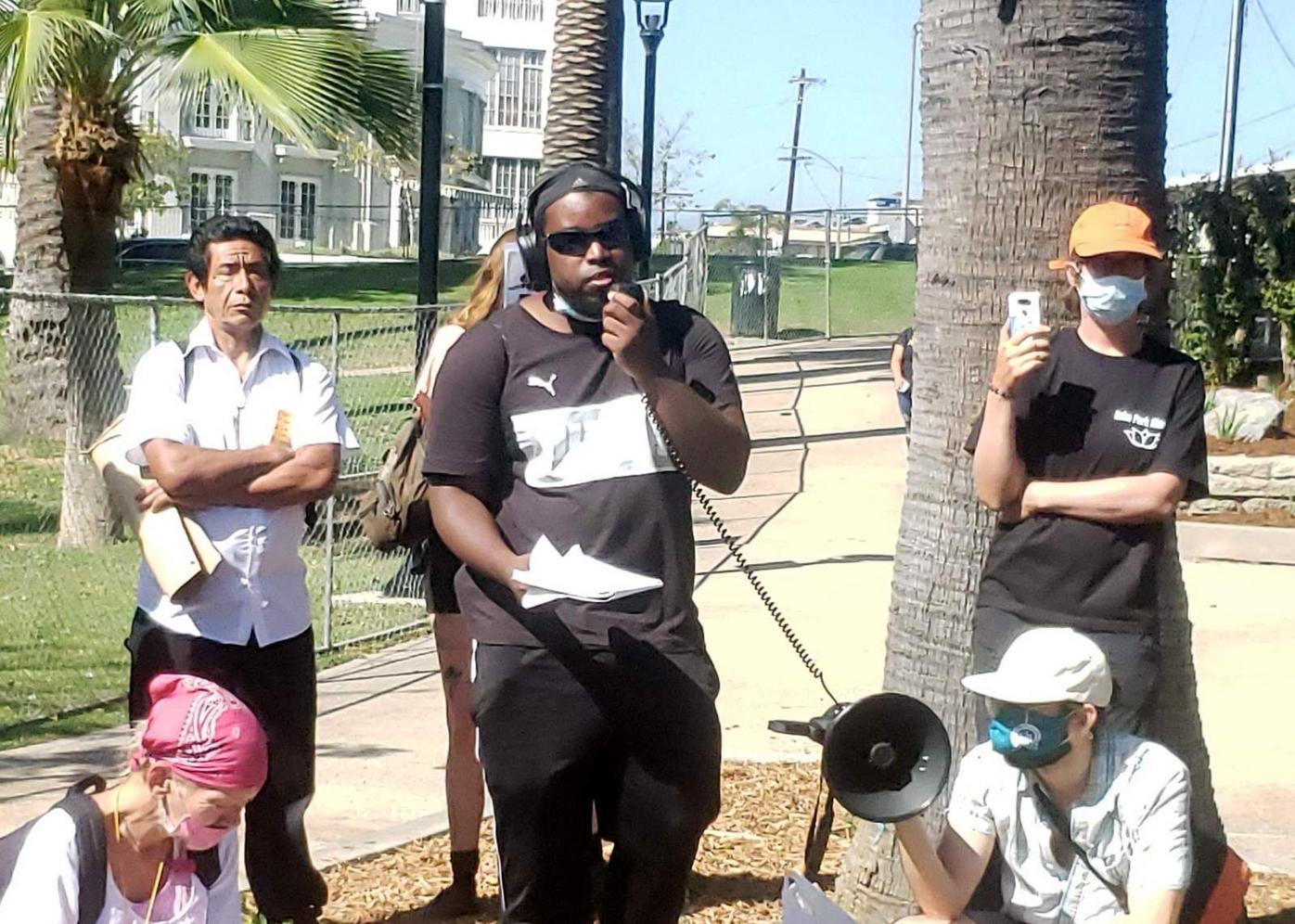 Activists were at the Echo Park Lake reopening and criticized the removal of the encampment and current shelter options. 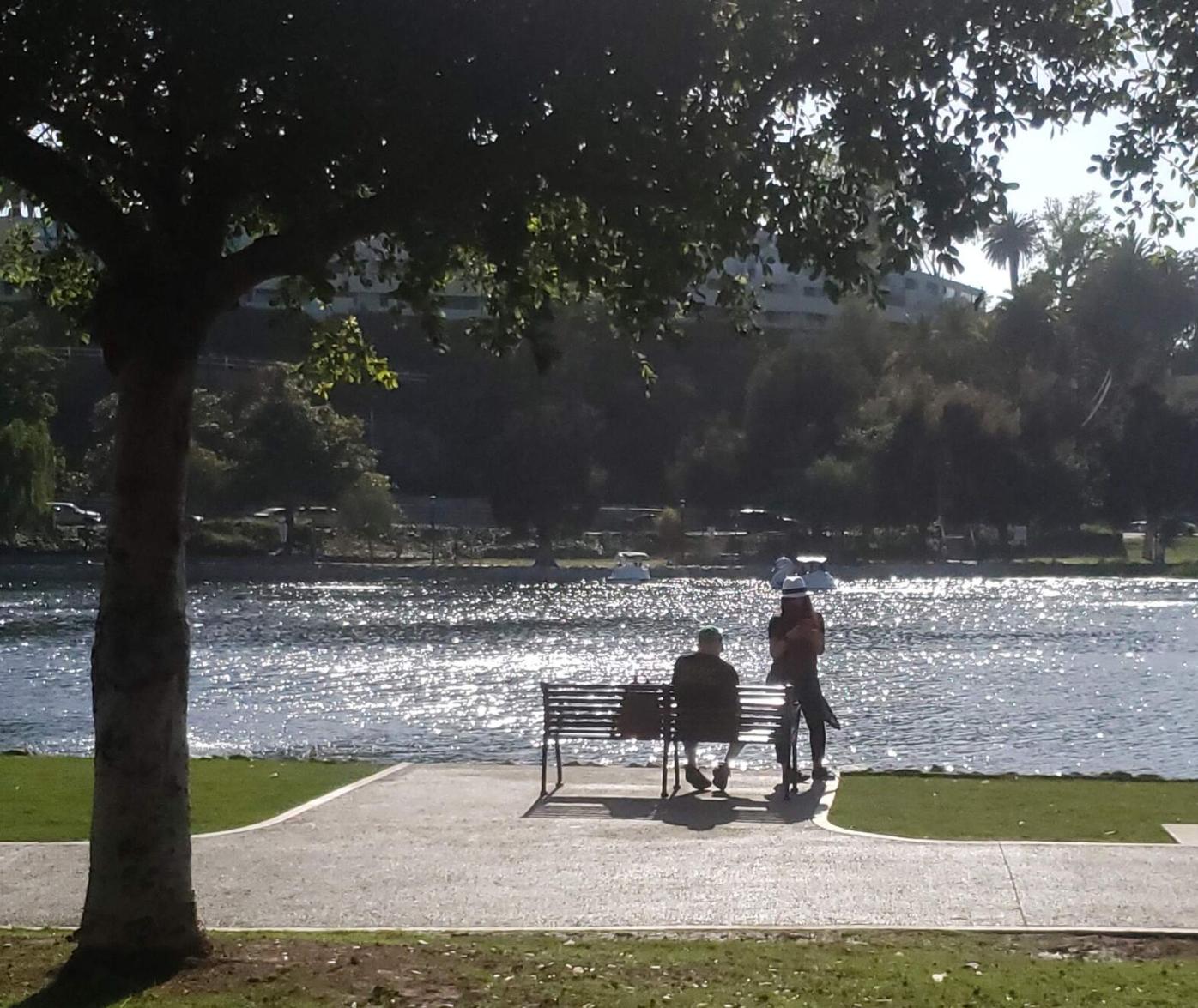 Park visitors take in the view of the lake.

Echo Park - Echo Park Lake reopened to the public this afternoon, two months after the park was closed following the relocation of about 200 homeless people who had taken up residence there, and anger over their removal continued to boil over.

Councilman Mitch O'Farrell, who came under fire from some homeless advocates during the effort to place the park residents into alternative housing, was among the first to walk into the park when it reopened at 3 p.m..

O'Farrell was quickly surrounded by a group of advocates, some of whom broke into chants of "Shame on Mitch"  while some people yelled at the activists. Police stayed out of confrontation.

O'Farrell, who was accompanied by staff and others, did not respond to hecklers as he left the park.

The park is marked with signs announcing that no camping, lodging or storage is permitted in the park. One sign warns that personal property left in the park after closing time "may be removed and impounded," and could be discarded if not claimed within 90 days. The park hours are marked as 5 a.m. to 10:30 p.m.

Chief Park Ranger Joe Losorelli said a prohibition on tents in the park will be enforced by the LAPD and park rangers. "There will be zero tolerance," he said.

The chain-link fence that has sealed off the park since late March remained in place this afternoon in addition to newly fenced off sections in the northwest corner of the park where the homeless encampment first begun. A spokeswoman for the Department of Recreation and Parks said she did not know how long the fencing would remain, but the park is accessible through four entrances.

The reopening comes after L.A. Sanitation and Environment crews removed nearly 36 tons of waste from the park, which underwent more than a $1 million worth of cleaning and repairs, including replacing playground surfacing, upgrading restrooms and refurbishing the park's turf and improving irrigation.

In addition, officials said security cameras were to be installed in the park "to help ensure that Echo Park Lake remains safe and secure for all park users," according to a Council District 13 statement.

Some of the former residents of the lake's encampment and members of Unhoused Tenants Against Carceral Housing appeared during a press conference at the park an hour after it opened "describe the negative consequences that eviction has had" on the former tent dwellers.

An estimated 200 people who had lived in the park in tents and other structures were relocated to hotel rooms and other forms of shelter over a period of three months before the closure, according to city officials. Many others moved to other encampments, according to advocates for the unhoused.

The removal of the homeless triggered street protests and tense confrontations between activists and police in the streets surrounding the park.

While 13th District Councilmember Mitch O'Farrell and Mayor Eric Garcetti declared the operation a success, opponents of the park's clearing, including a coalition of faculty at USC, UCLA, UC Irvine and Occidental College, pointed out that most of the housing options were temporary and some were in congregate shelters amid a pandemic.

In an interview with The Eastsider, O'Farrell said that no one will be allowed to set up a tent or structure on the park grounds, which will have around-the-clock security when it reopens. There will be greater efforts to make the public aware that the park is open only from 5:30 am to 10:30 pm, he said.

Workers with Urban Alchemy will be available to conduct outreach to homeless persons and inform them of housing and shelter options.

"No one will be allowed to occupy space for personal use or profit in the park," O'Farrell said. "The community is ready to enjoy Echo Park Lake again."

Jesus Sanchez contributed to this report

Jesús Sanchez is the publisher of The Eastsider. He has more than 30 years of experience in newspaper and online journalism and has been a staff writer at USA Today and the LA Times. The L.A. native is a graduate of East LA College and Cal State Long Beach. He lives in Echo Park.

[smile] I agree. The park and lake are for the public to enjoy, safely. The park does not exist to be a solution for the homeless problem. That needs to be addressed without reducing the few public parks we have in Los Angeles.

I, too, am glad that there is a place for recreation where people can relax and enjoy. Yes, there is a big problem of finding housing for those who live on the streets, but to take away the enjoyment of a historic park is not the answer.

For homeless advocates, just because there is an open space where people put tents does not mean it is right.

Thank you Mr. O’Farrell for having the guts to do what’s right for ALL of the citizens of Los Angeles. The park is meant to be a safe enjoyable spot for recreation NOT residential occupancy.