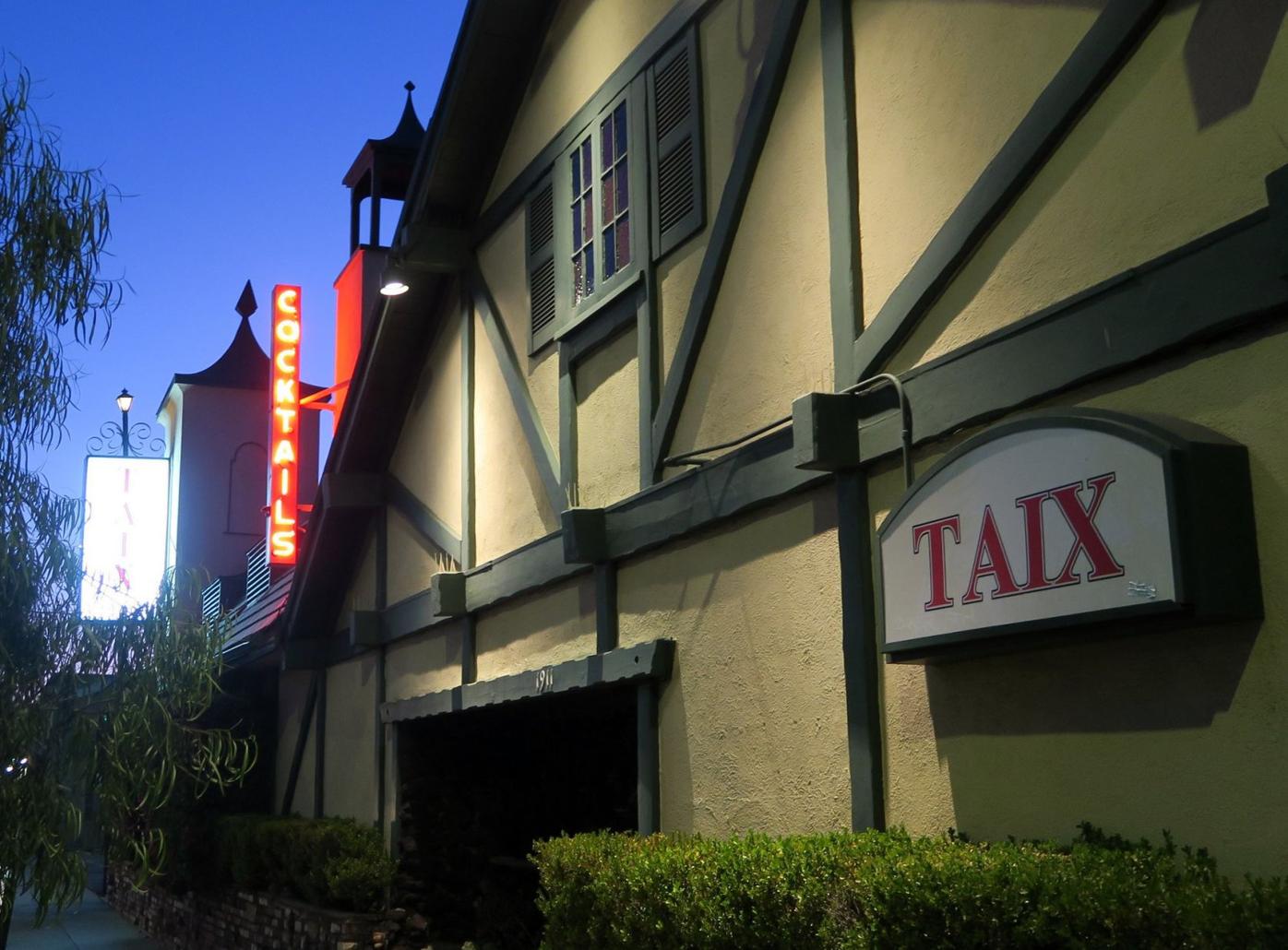 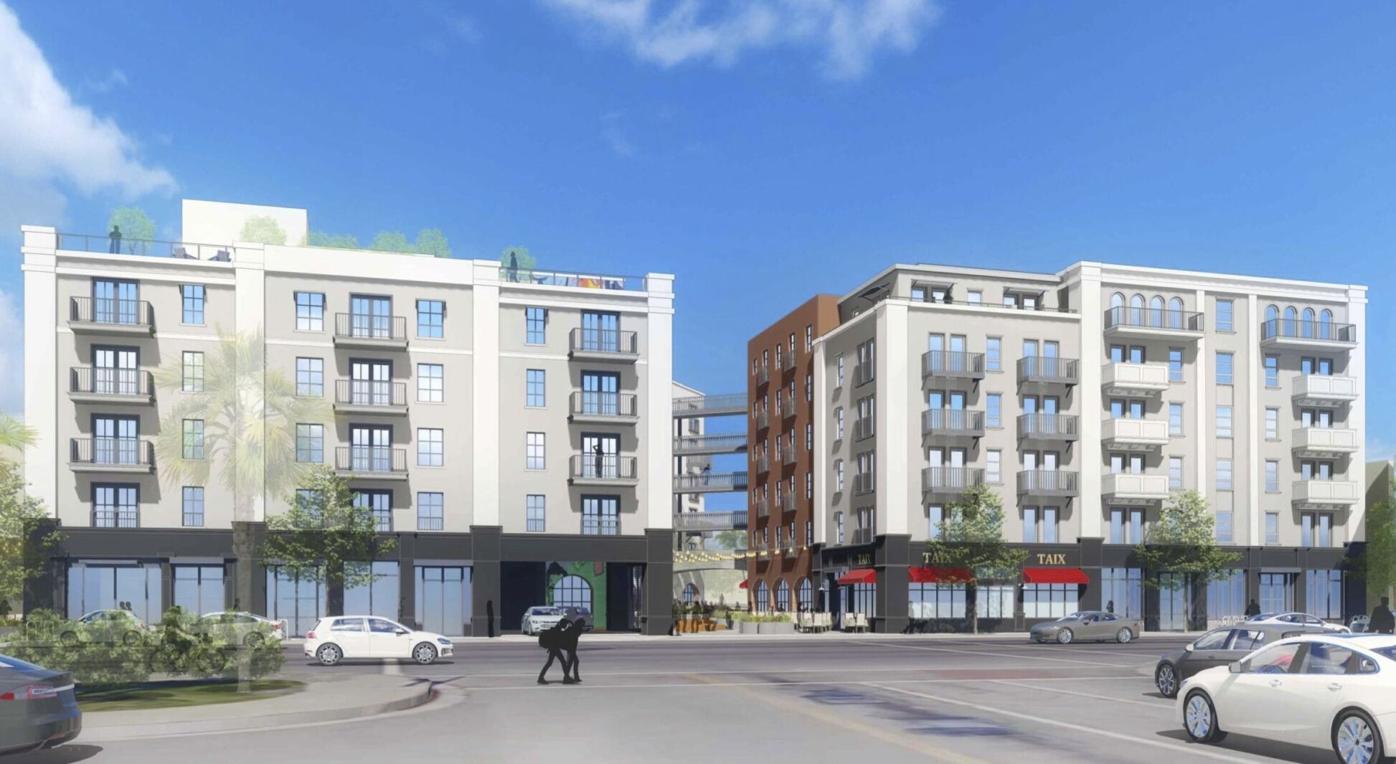 The latest design concept for the Taix development, presented in September 2020.

Despite the landmark designation, the rambling Sunset Boulevard restaurant is likely to be demolished to make way for a large residential and commercial development, which would contained a scaled-down version of Taix.

At the request of Councilman Mitch O'Farrell, and with the support of restaurant owner Mike Taix and a developer, the restaurant's landmark nomination was modified to preserve only a few elements of the building: two outdoor signs and the wooden bar top inside. The rest was deemed not worth preserving.

O'Farrell, at this morning's council meeting, said his changes to the landmark designation would honor Taix's historic role while allowing the restaurant to stay in business -- albeit in a smaller and still undetermined format. "Unfortunately, nostalgia will not save the business," said O'Farrell.

When fellow city councilman Paul Koretz asked O'Farrell if there was anyway to save the quirky Taix facade, O'Farrell said it "does not merit preservation."

Developer plans to replace the Taix with 170 units of housing

The battle over Taix was triggered three years ago when owner Mike Taix announced he had sold the restaurant property to Holland Partner Group, which unveiled plans to build a complex of six-story buildings on the site. The project would include a smaller version of Taix, which moved to Echo Park in the early 1960s after being founded Downtown in 1927.

After preservationists nominated Taix as a city historic landmark, Mike Taix and Holland Partner argued that only the business -- not the building nor its architecture -- was important from a historic and cultural standpoint. That would make it easier to bulldoze the structure despite its landmark status.

Last December, the Cultural Heritage Commission, which reviews landmark applications, supported the nomination. But the commissioners were also more interested in honoring Taix for its legacy as a business and gathering place instead of as an example of French Normandy architecture. “The architectural quality is kind of negligible,” said one commissioner.

Only two Taix signs and a bar top would be preserved

Making matters worse for preservationists, the City Council’s Planning and Land Use Committee placed additional limits on the Taix landmark nomination at the urging of O’Farrell, whose 13th Council District represents Echo Park.

As a result, the only artifacts that would be preserved from the old Taix building are the red-and-white Taix billboard sign on the rooftop; a vertical red-and-white "Cocktails" sign along Sunset Boulevard, and the restaurant’s original cherry wood bar top.

This is all very much what Mike Taix and Holland Partner had been requesting.

“I’m grateful for the city for recognizing the historical value of the business,” Mike Taix said.

But the L.A. Conservancy, the city's largest historic preservation group, criticized the changes, saying they set a dangerous precedent for the city's Historic-Cultural Monument program. “HCM designation is tied to historic buildings and places, not building fragments and salvage,” the Conservancy said in a statement.

As a result, this decision could have an impact on historical designations citywide, not just with Taix, according to the Conservancy’s senior director of advocacy, Adrian Scott Fine. “This approach weakens the entire program, if pursued,” said Fine.

Approval of the modified historic nomination was a crucial win for developer Holland Partner, which paid more than $12 million for the property and has spent $170,000 on lobbying city officials on the project. With the City Council's vote, can continue to pursue plans to replace the restaurant building with 170 units of housing and 13,000 square feet of retail commercial space - including a prominent place for a smaller version of Taix.

“It’s been our goal from the beginning to develop this site in a manner that respects the neighborhood and the history of the site,“ said Holland Partner executive Tom Warren.

But Holland Partner still needs additional city approvals and will face more public hearings, culminating with the Planning Commission, Warren said. Holland has modified its preliminary design after meeting with some unfriendly reactions from community stakeholders, but has kept the size roughly the same.  A timeline is hard to determine, Warren said, though the plan could come before the commission in late summer.

Preservationists said they will also remain active as the development process moves along.

“We still think there is an opportunity to consider alternatives,” Fine said, “like more discussions to allow meaningful preservation for the restaurant as well as proposed housing.”

• The Taix building and parking lots were sold to Holland Partner Group in 2019.

• Holland Group wants to demolish the Taix building to build 170 units of housing and retail space, which would include a smaller version of Taix

Note: Jesus Sanchez, publisher of The Eastsider, is also a member of the Echo Park Historical Society, which has opposed the Taix project as currently proposed.

Also, I'd ask the Silver Lake Heritage Trust (the folks who nominated Taix as a landmark) to take some time for self-reflection. At this point, I'm aware of 3 nominations they've made, none of which have saved anything and which have arguably, weakened the cause of historic preservation in Los Angeles. Articles like today's editorial in the LA Times making a false argument for housing over preservation and CD 13's cheapening of HCM are not a fair trade for even a successful landmarking of Taix. Please pick better battles.

A compromise that pleases almost no one except the city council members who unanimously supported it today. After all, they now have a nice, simple solution to thorny preservation issues in their own district; stick a couple of bits of salvage on the new stucco box and call it a landmark.

By the way, where'd the pantry from the Ambassador Hotel ever end up?

I love Taix and am all in favor of preservation in Los Angeles, but in this case, it would have been better if the nomination was simply voted down.

It pleases me and all of my friends (we've been in the neighborhood for 20 plus years). Looking forward to the updated version of Taix.