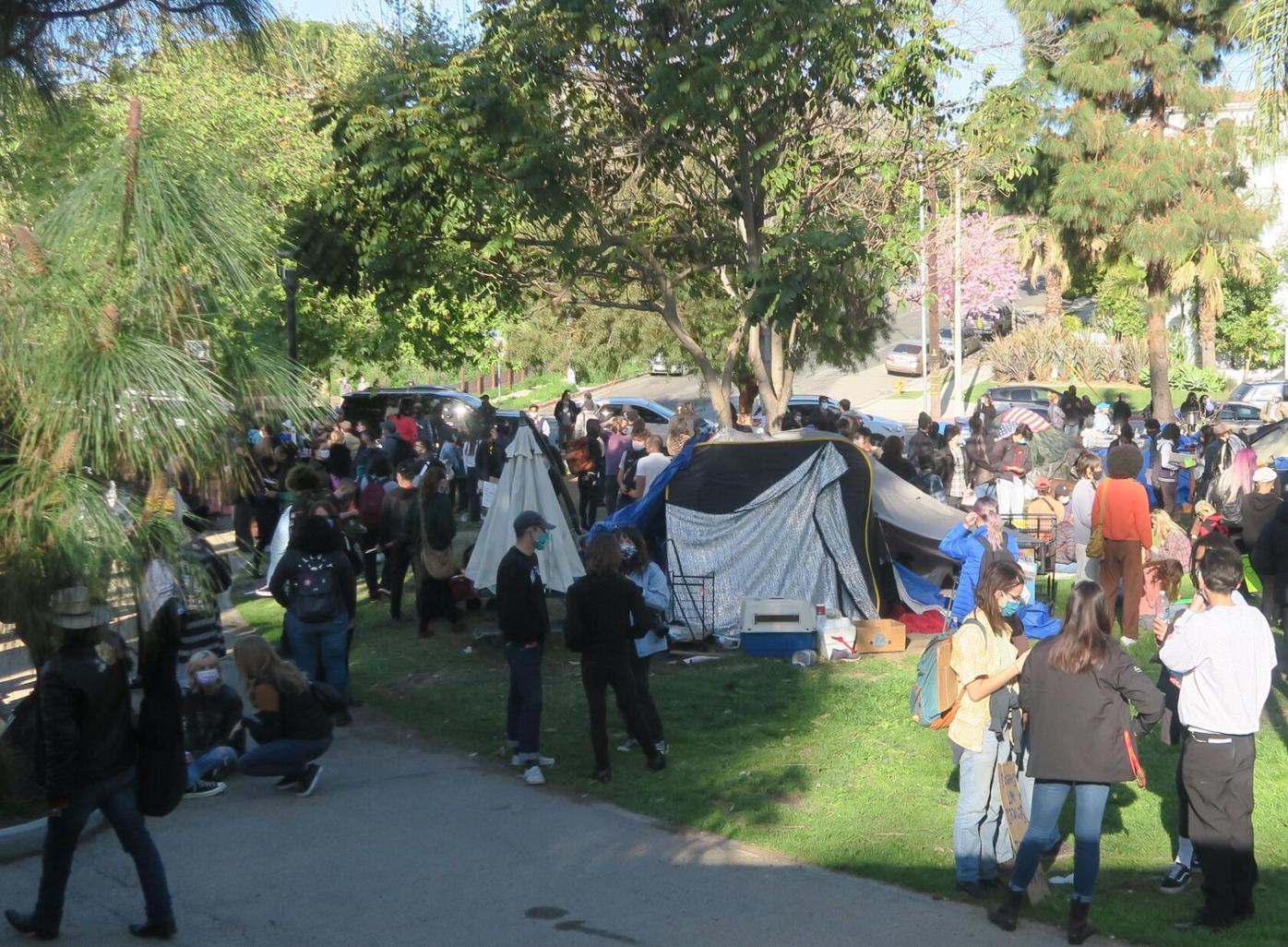 Most of the demonstrators were gathered in the northwest corner of the park. 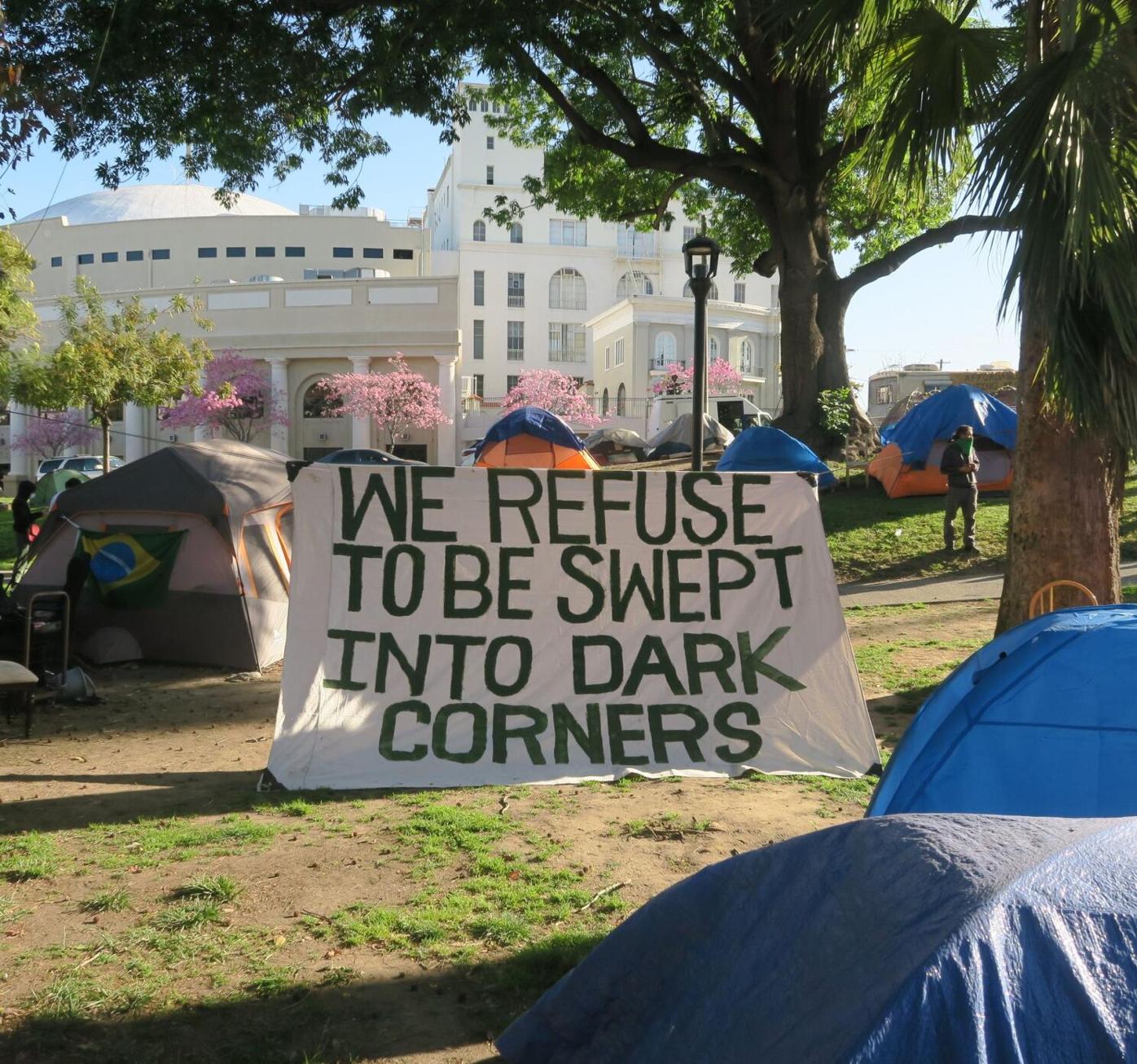 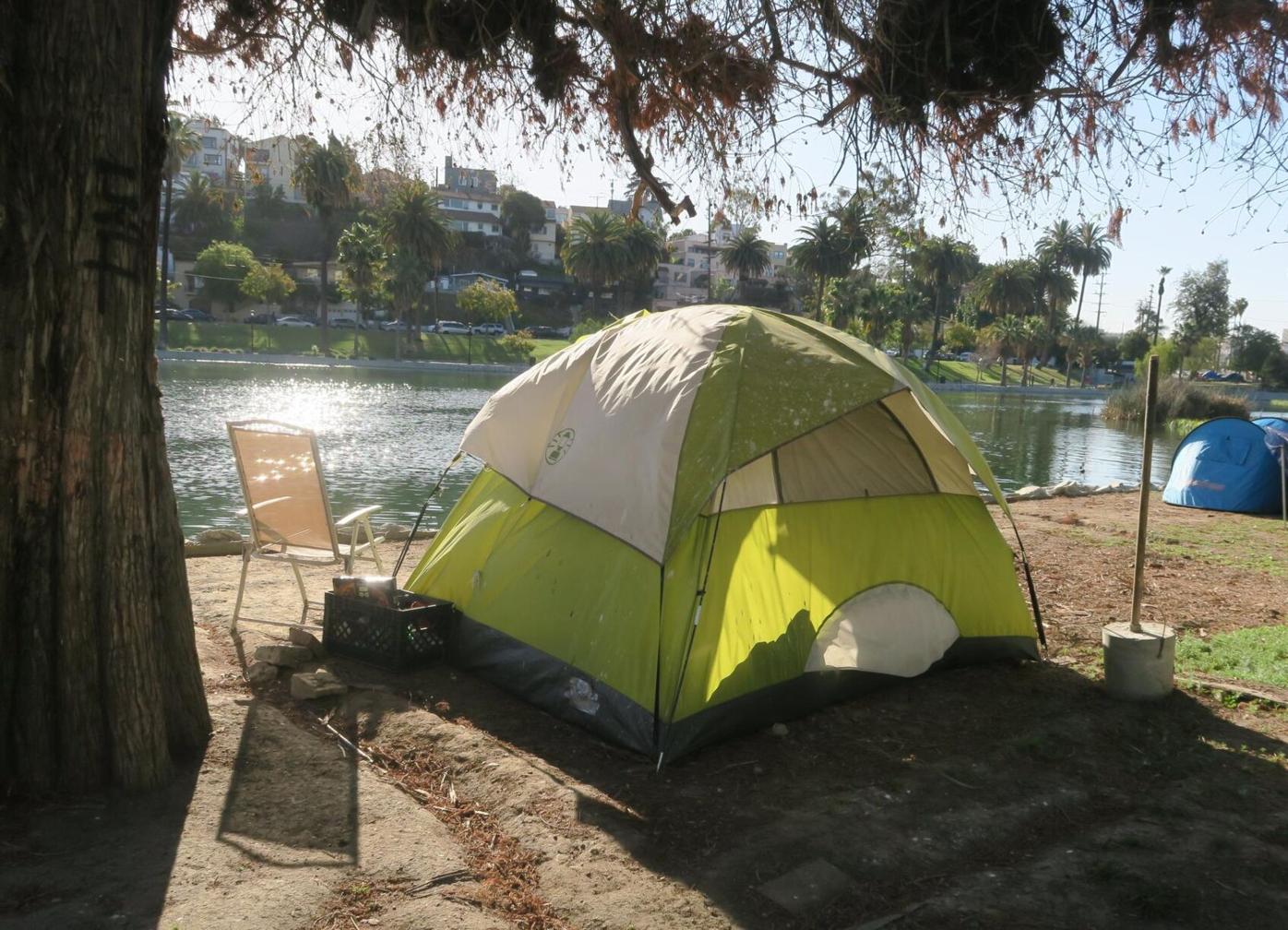 Despite the protest, most of the lake was quiet and peaceful. 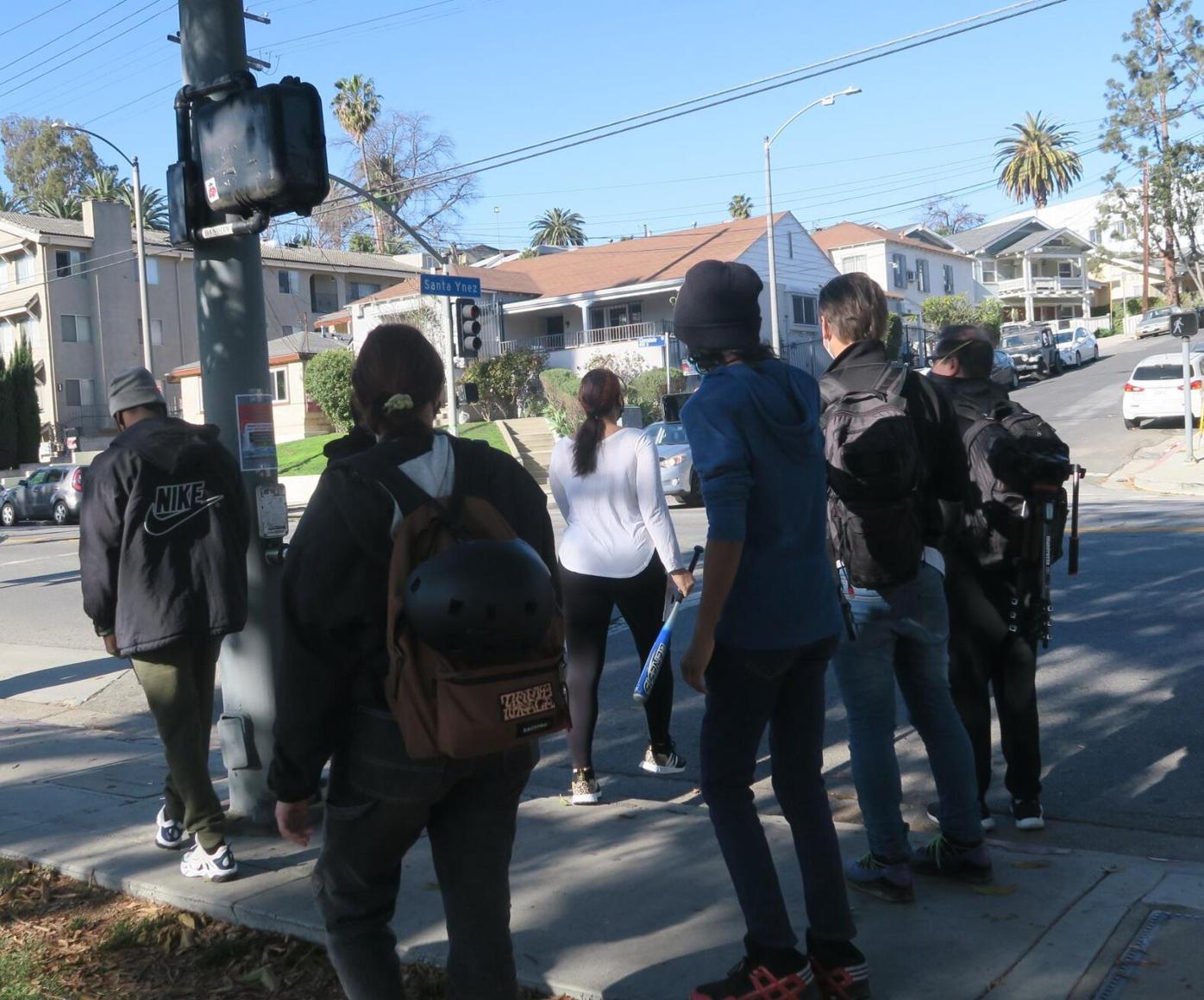 Homeless advocates face off with a woman with a baseball bat. She eventually walked away from the park.

Echo Park - A few hundred activists, students and homeless residents gathered at Echo Park Lake this morning to oppose the city's plans to close the park and remove a homeless encampment.

Most of the youthful crowd was clustered in the northwest corner of the park, where they heard speeches denouncing the upcoming closure and 13th District Councilman Mitch O'Farrell, who has been the target of homeless activists as well as critics of the large encampment. Many people were busy making protest signs and hanging banners.

At one point a group of activists blocked a portion of nearby Sunset Boulevard to gather outside O'Farrell's Echo Park field office before dispersing. Several LAPD patrol vehicles were parked in a nearby parking lot but officers were not visibly present in the park.

One advocate told KNX Newradio that people living in the park 'got hit worse by the pandemic, by the situations of life,'' and did not deserve to be swept out without alternatives. Although the city has said housing would be found, those gathered this morning had their doubts, with one saying there was "no guarantee" the city would find "somewhere safe" for people to live.

Many carried signs with slogans such as  "Services not sweeps'' and "House keys, not handcuffs."

The scene was pretty mellow but there were tense moments. At one point a woman who had jogged through the crowd earlier was spotted on Glendale Boulevard holding a metal baseball bat. One man with a bullhorn pointed her out, prompting many in the crowd to run in her direction while others urged calm.

"We don't engage with the NIMBYs," said one man. "What happened to our protocols?"

Eventually the woman left the park and crossed the street as some yelled epithets in her direction.

The rest of the park was pretty quiet, with anglers casting their lines into the lake as geese honked in the background.

Today's protest and a 24-hour vigil was organized by activists after O'Farrell announced that the park would be closed and fenced off to repair an estimated $500,000 in repairs. His office did not announce when the closure would take place, but activist have said it was planned for Thursday night.

O'Farrell told reporters during an unrelated news conference Tuesday that the city will follow all CDC guidelines -- which advise against moving the homeless during the pandemic -- and house all residents of the park who have lived there since January. But he did not provide details about what type of housing would be provided or when it would happen.

Advocates for the unhoused community, including the organizations Echo Park Street Watch, Ground Game L.A. and the Los Angeles Community Action Network, have said they will support the park's residents and attempt to withstand the order. The group plans to hold a 24-hour vigil "to seek citywide cooperation and support in coming days to stop the shutdown of L.A.'s largest self-run homeless haven."

Echo Park Lake is "not safe for anyone"

O'Farrell disputed descriptions of the encampment as "utopian" in light of several deaths, drug overdoses, assaults and acts of vandalism.

"It has developed into a dangerous, chaotic and anarchistic place," said O'Farrell in a phone interview. "It not safe for anyone."

As of today, more than 120 people who had lived in the lake have been moved into housing with 3 meals a day and access of medical and social services, O'Farrell said. More people will be relocated today, he said.

O'Farrell said that people "will not be allowed to stay in the park grounds" once its closed for repairs. He did not say how the city would respond to those who resist leaving or the potential for violence. "We will let our public safety officials deal with  that but we hope that people will be responsible," he said.

"It's time to get [the homeless] indoors," O'Farrell said. "It's time to bring the lake back to iconic status for all the residents of Echo Park."