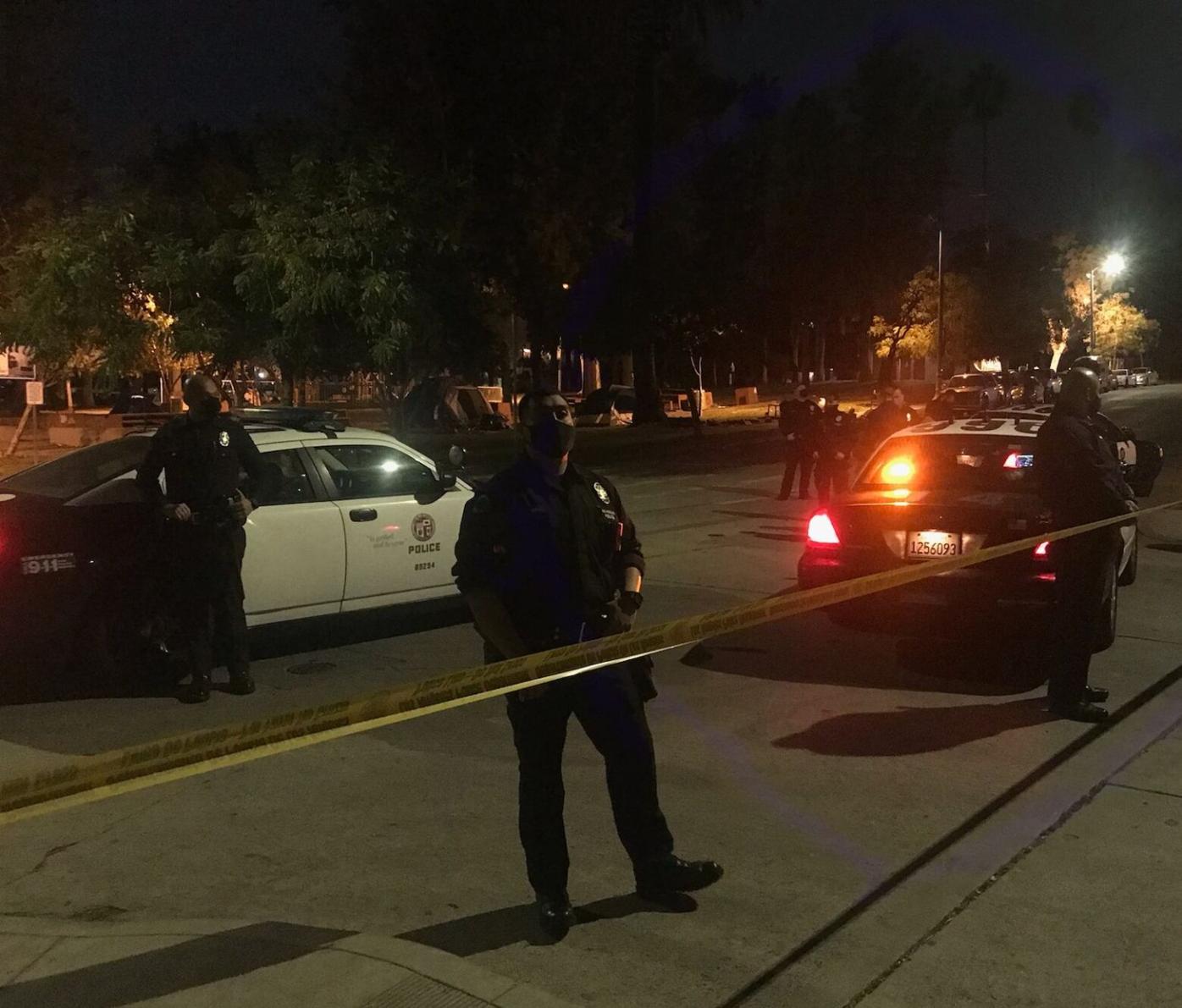 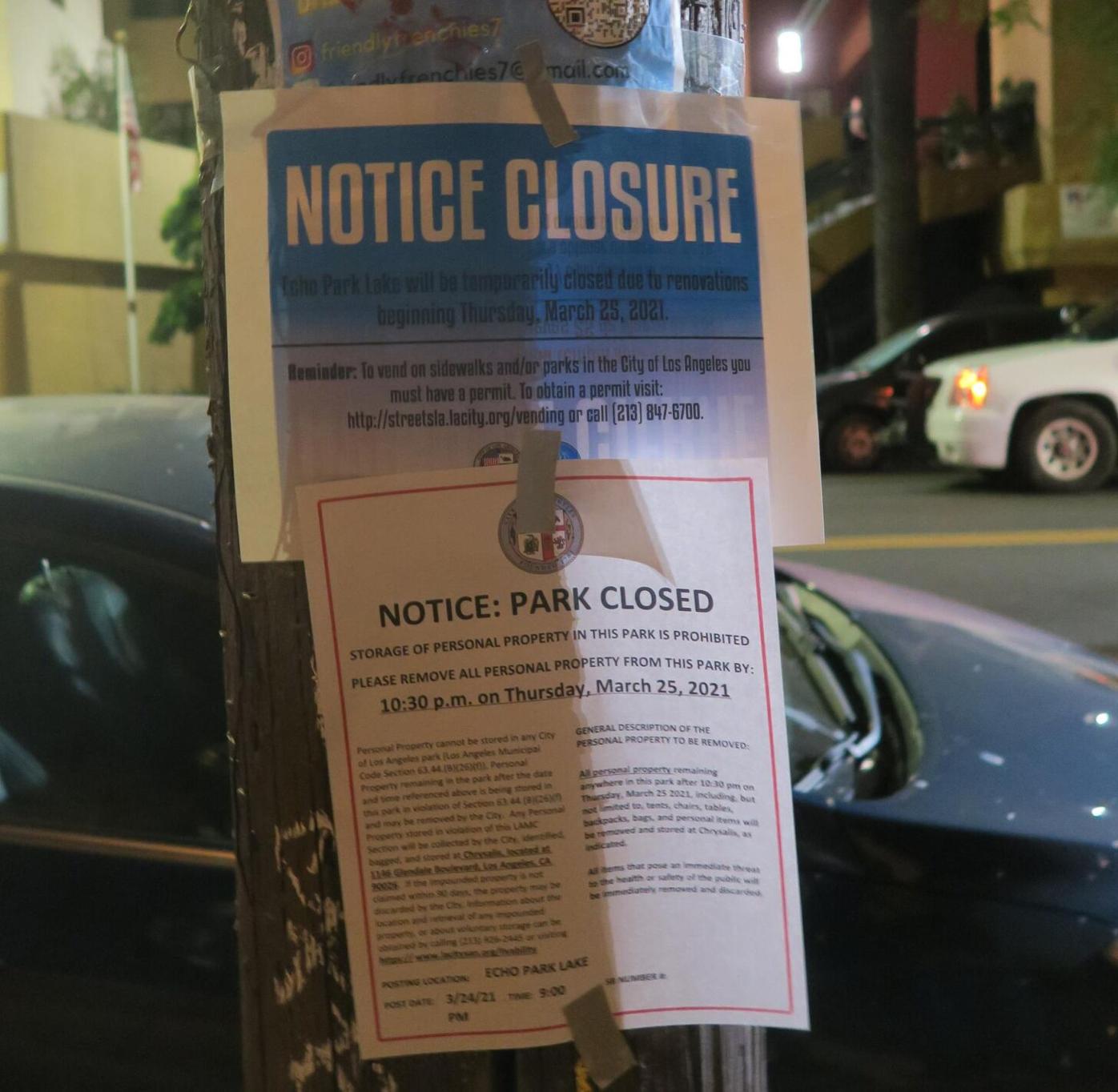 Closure notices were posted around the park Wednesday night. 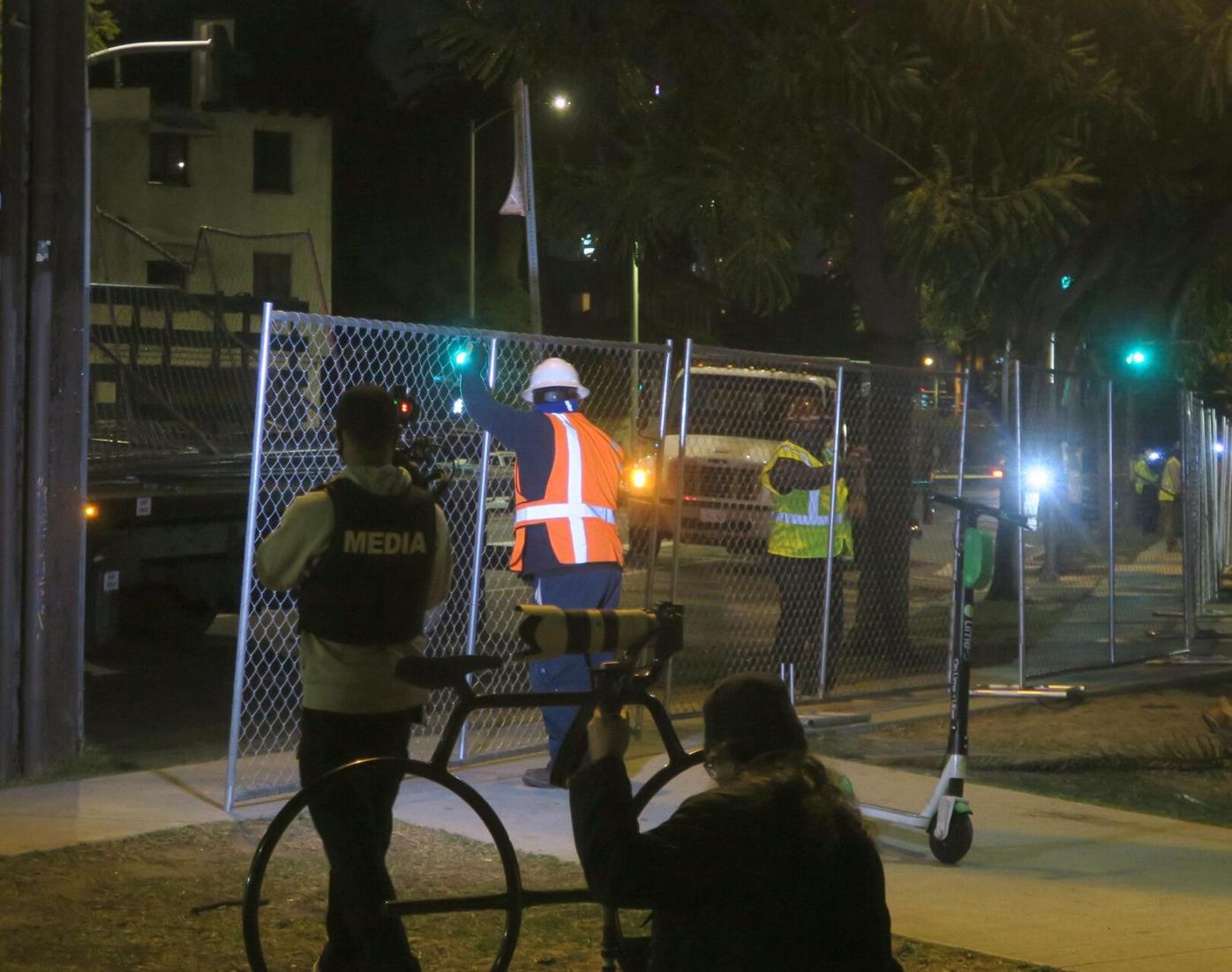 Fencing going up on the Echo Park Avenue side of the lake. 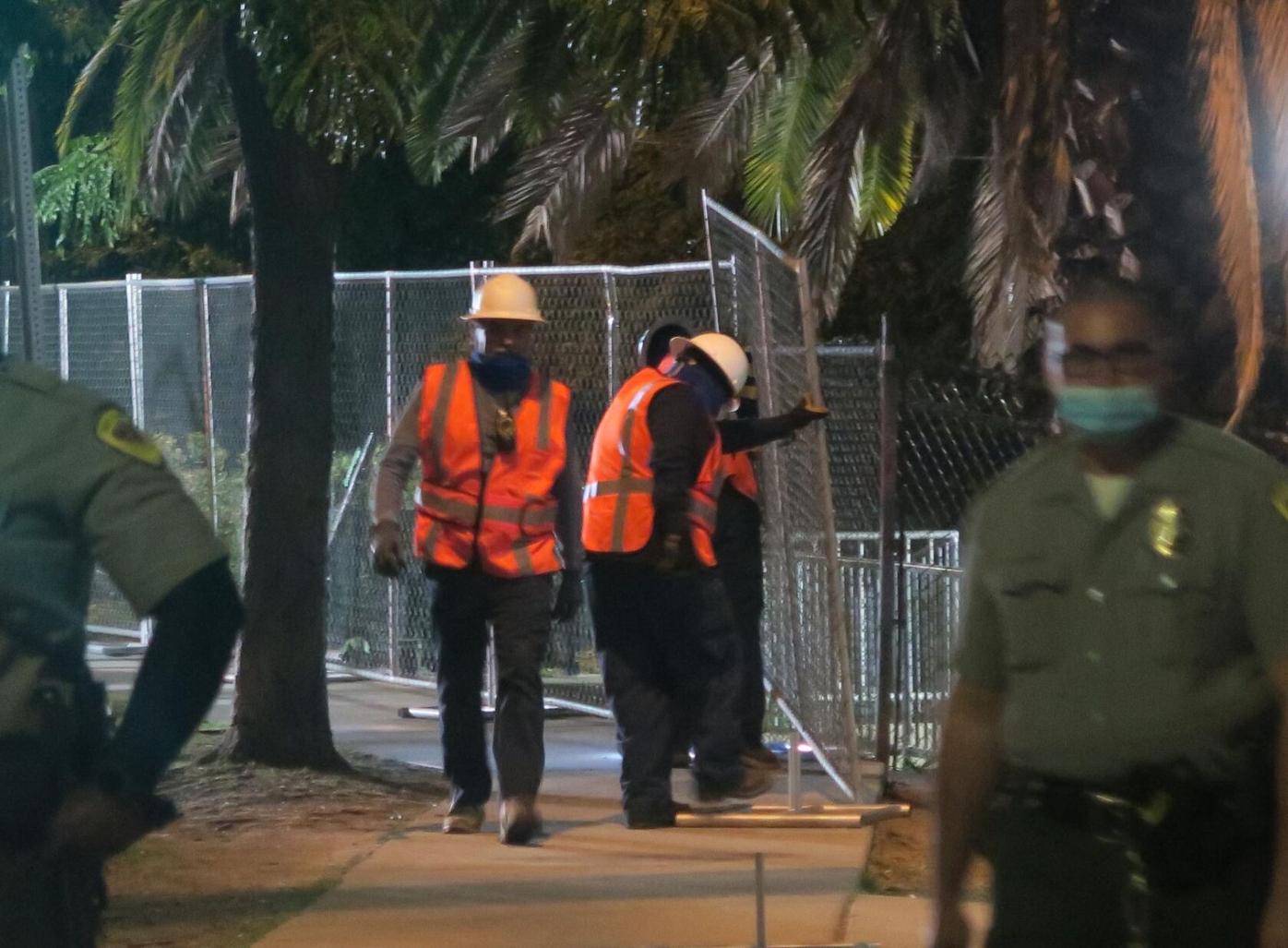 Officers stood by as crews installed fencing around the lake.

Echo Park - Police in riot-gear sealed off Echo Park Lake tonight after officials announced plans to close the park with one of the city's largest and most prominent homeless encampments.

Officers and protestors faced off on Glendale Boulevard and Santa Ynez Street near the lake as the LAPD declared an unlawful assembly and ordered the public to disperse.  The LAPD tweeted that officers at Santa Ynez Street and Glendale Blvd were "being assaulted with rocks, bottles and smoke bombs." Police closed numerous streets surrounding the lake, and the Echo Park Avenue offramp from the 101 Freeway was shut down.

Despite many intense confrontations over the span of several hours, the evening ended relatively peacefully without any reports of major violence.

As officers stood guard, workers began to install fencing around the park after things calmed down. "People currently in the park will be allowed to stay overnight, but will not be allowed to come and go," the LAPD said on Twitter.

"The Los Angeles Police Department was asked to support community safety efforts during installation of the fencing to assist in the rehabilitation of Echo Park," said a statement issued tonight by 13th District Councilman Mitch O'Farrell. "Department personnel are deployed in that area so that those efforts can begin in a safe and unimpeded manner."

Homeless service providers were to return to the park on Thursday to continue to offer the encampment's remaining residents shelter and services in different locations, O'Farrell said.

LA City Councilmember Nithya Raman, who represents a portion of Silver Lake, was reportedly at the lake tonight. That could not be confirmed but she tweeted: "While I've been happy to see so many people from the lake being housed over the last few days, a forced and sudden eviction is not the way to move forward now."

Officials began posting notices on trees tonight that the park would be closed on Thursday and that all personal belongings must be removed.

Earlier today, a few hundred activists, students and homeless residents gathered at Echo Park Lake to oppose the city's plans to close the park and remove a homeless encampment.

Today's protest and a 24-hour vigil was organized by activists after O'Farrell announced that the park would be closed and fenced off to repair an estimated $500,000 in repairs. His office did not announce when the closure would take place, but activist have said it was planned for Thursday night.

O'Farrell said that people "will not be allowed to stay in the park grounds" once its closed for repairs. He did not say how the city would respond to those who resist leaving or the potential for violence. "We will let our public safety officials deal with  that but we hope that people will be responsible," he said.

2nd riot line forming behind the first ones— protesters are on the other side #EchoPark pic.twitter.com/ppg5vOz8Rt

View of riot line v protester crowd— fell off what I was standing on half way, when the cam shakes lol#EchoPark pic.twitter.com/KEazDam00p

O'Farrell has said that the city will follow all CDC guidelines -- which advise against moving the homeless during the pandemic -- and house all residents of the park who have lived there since January.

Advocates for the unhoused community, including the organizations Echo Park Street Watch, Ground Game L.A. and the Los Angeles Community Action Network, have said they will support the park's residents and attempt to withstand the order.

Echo Park Lake is "not safe for anyone"

O'Farrell disputed descriptions of the encampment as "utopian" in light of several deaths, drug overdoses, assaults and acts of vandalism.

"It has developed into a dangerous, chaotic and anarchistic place," said O'Farrell in a phone interview. "It not safe for anyone."

As of today, more than 120 people who had lived in the lake have been moved into housing with 3 meals a day and access of medical and social services, O'Farrell said. More people will be relocated today, he said.