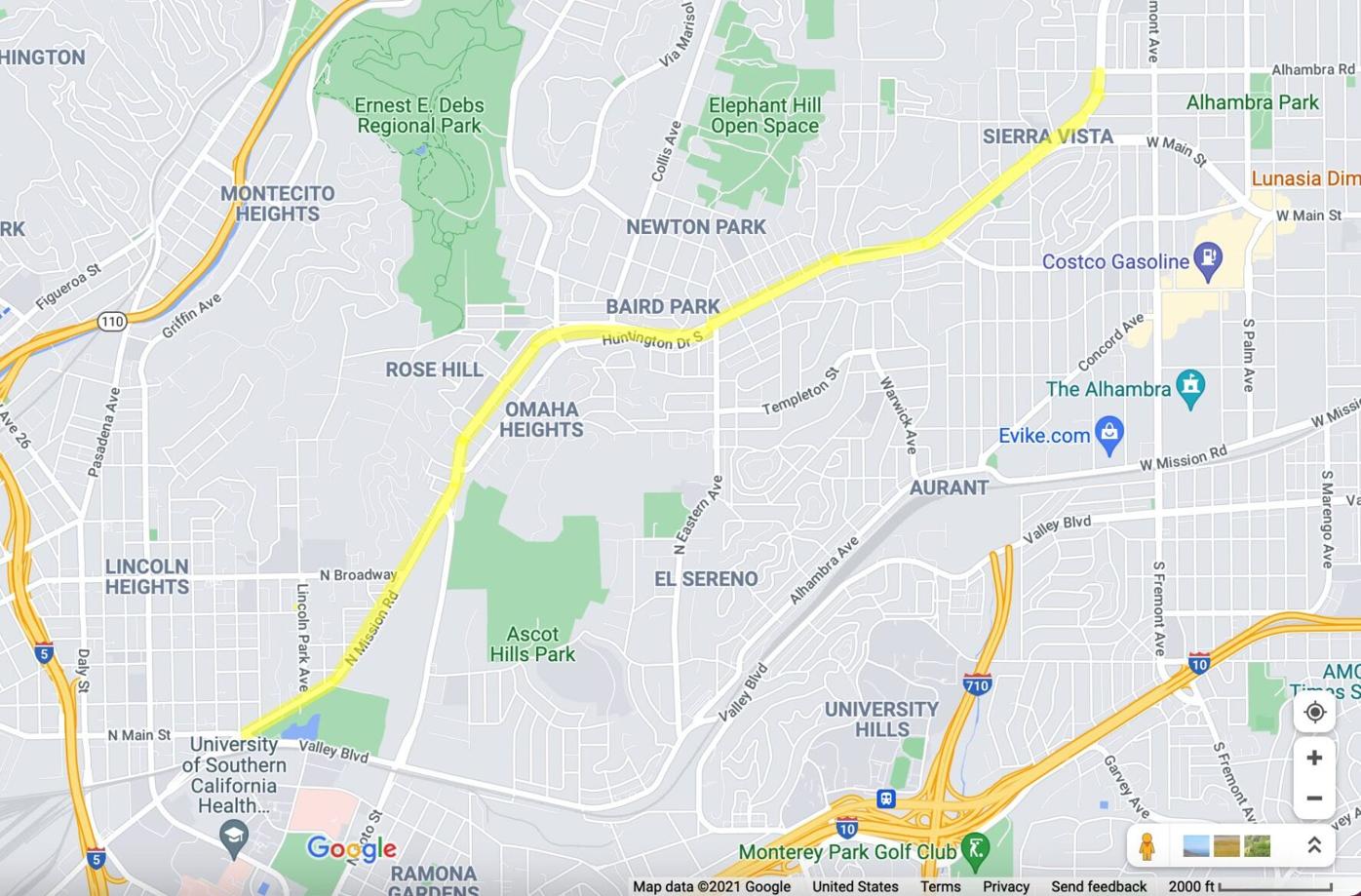 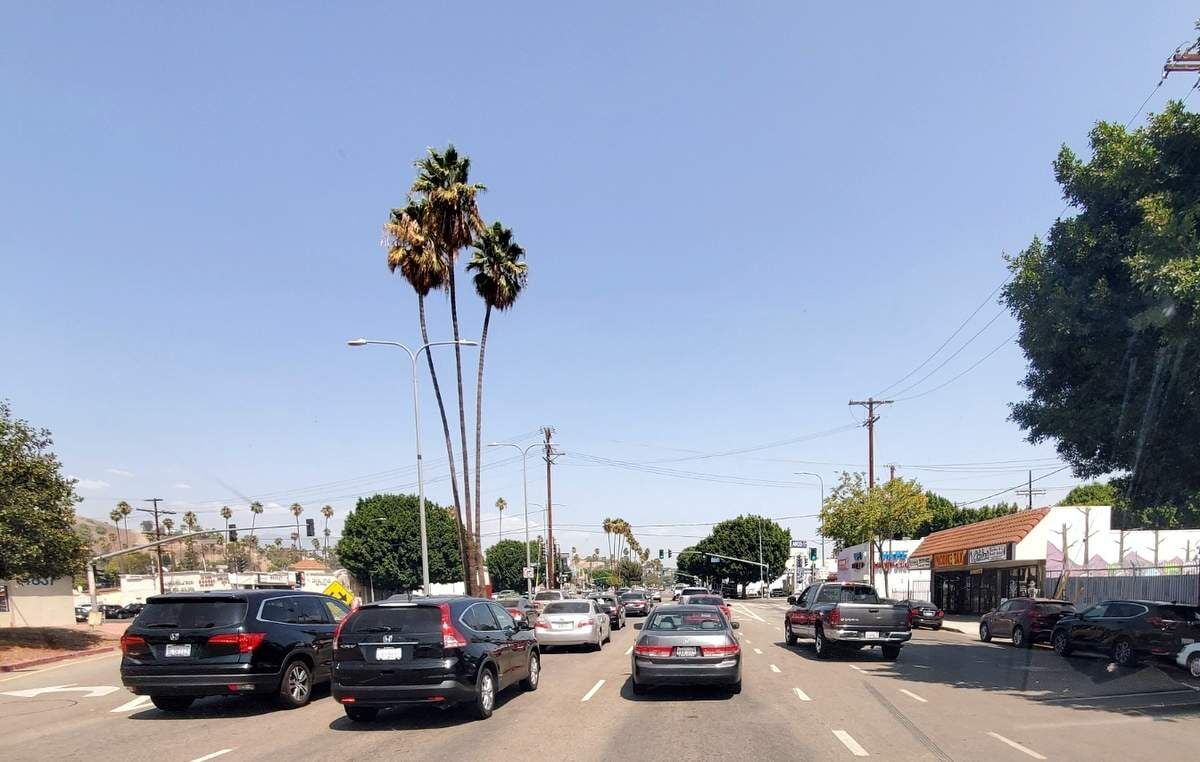 El Sereno - What would it take to improve Huntington Drive?

How can this traffic artery work better for every kind of transportation, while allowing smoother access to everything along the way? Add sidewalks and bike lanes? Create a bus-only route? Expand parks and open spaces?

These are some of the questions residents will be asked as the broad corridor -- a former Red Car street car route -- will be getting reimagined and reworked over the next few years. There’s no picture yet of how it will look in the end, because the City’s Bureau of Engineering, in conjunction with the office of City Council District 14, is only just starting to gather ideas.

Renovations will focus on a four-mile stretch from Huntington Drive and Alhambra Road to Mission Road and Valley Boulevard, which has six lanes in parts, and is considered by many as El Sereno's main drag and commercial district.  It also runs past schools and apartment buildings, and its grassy median is wide enough in spots to accommodate a veterans monument as well as large homeless encampments.

City officials are now starting to meet with the public and consider what the project's web site calls an “unscreened set of alternatives.” Eventually those will be narrowed down to a few choices to be studied further.

That whole process of studying the possibilities will take about a year, and should be done by mid 2022, according to Mary Nemick with the Bureau of Engineering.

“Following extension community engagement and work with the Council office, approximately three feasible alternatives will be reviewed and analyzed in detail,” Nemick said. “One preferred alternative will be recommended.”

Then it’ll be another three years or so while the environmental documentation process works its way through. Changes won’t even start to happen until around 2025.

While all options still seem to be open at the moment, however, the Huntington Drive Multi-Modal Transportation Improvement Project does not seem to include a road diet, Brown and Nemick said.

“The project is not expected to lose a traffic lane,” Brown said. “It will most likely involve reconfiguration of the roadway to maximize space for various modes of travel as well as maximizing open space availability, including the extension of bike lanes, continuous sidewalks, and traffic circulation improvements.”

The project is being funded by some of the money that had previously been allocated for construction of the 710 Freeway extension. The 710 project was abandoned in 2019 after decades of local opposition.

I've walked and driven along Huntington Drive many times and it is not a great street in its current configuration, to say the least.

Huntington Drive in more than 90 feet wide in most spots -- there's definitely room to take away some space from cars. There is, of course, no such thing as a "non-polluting car." A tremendous amount of pollution is created when any car is manufactured, pollution is caused when they are demolished, and half the pollution of any car comes not from exhaust but from microplastics and brake dust.

If you're going to get people out of cars, you have to improve mass transit. Buses need dedicated lanes, then they will move faster, then they will be more appealing as a transit option, then more people will take them. Huntington Drive was designed for mass transit, not cars. That's why it's so wide. It was the right-of-way for Pacific Electric Railways's Monrovia-Glendora Line, which ran from 1902 until 1951. Pacific Electric Railway was owned by Henry Huntington. The name of him being the same as the street it not a coincidence.

There's not even a sidewalk on both sides of Huntington Drive in sections. If you want to get people walking, which you do, you have to give them a sidewalk rather than expect them to walk along the road verge next to speeding cars.

Much of the median is just concrete. Landscape it. People drive more slowly (and thus more safely -- and cause less pollution and death) when there are street trees. Trees also, you know, clean the air, soil, and water -- not to mention, they make people and animals happy.

Install bicycle lanes -- which will get more people out of cars.

Even with bicycle lanes, sidewalks, and bus-only lanes, there will still be some who insist on driving no matter what. Leave them a lane on each side.

A dedicated bus lane does not work, is stupid until you have buses coming down it all day no more than about 5 minutes apart. That is not the case there, nor will it be any time in the foreseaable future. Maybe someday down the line a dedicated bus lane will be justified, it is not even close to that now. And no, "build it and they will come" does not work, that's just something that happens in the movies. A "road diet" by any other name is still a "road diet," and that's all a bus lane is when there are not enough buses using it to justify it.

But does Huntington really need so many car lanes? Wide streets and too many car lanes leads to excess speeds and crashes and making the street unpleasant for people on bikes, on foot, and using transit.

There's a really informative website for the project here:

They don't have a problem of excess speed and crashes there. You're advocating to stop something that isn't happening, and to do so by creating a traffic jam. That's not a solution to something, that's an excuse.

What you are saying that any excuse should be found to take out a car lane, even calling it a bus lane when a bus comes along what, at best once every 20 minutes, the rest of the time it's just an empty, unused lane?

There is zero need to get rid of cars, they are being changed over to non-polluting, they will not be an issue for global warming. That idea being pushed is obsolete, and anachronism for cars, it was an idea from the 1990s before there were any non-polluting cars.