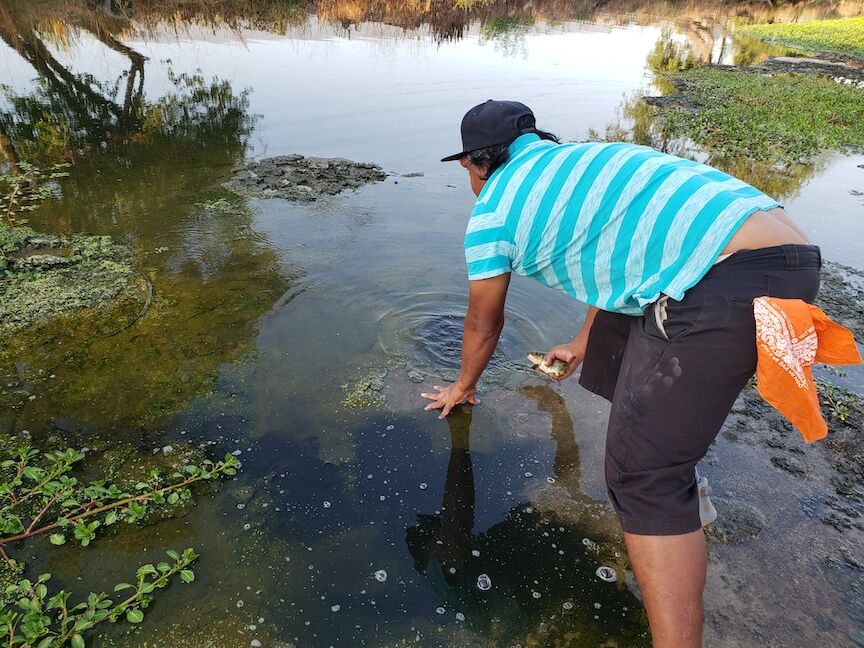 Throwing a fish back into the L.A. River. 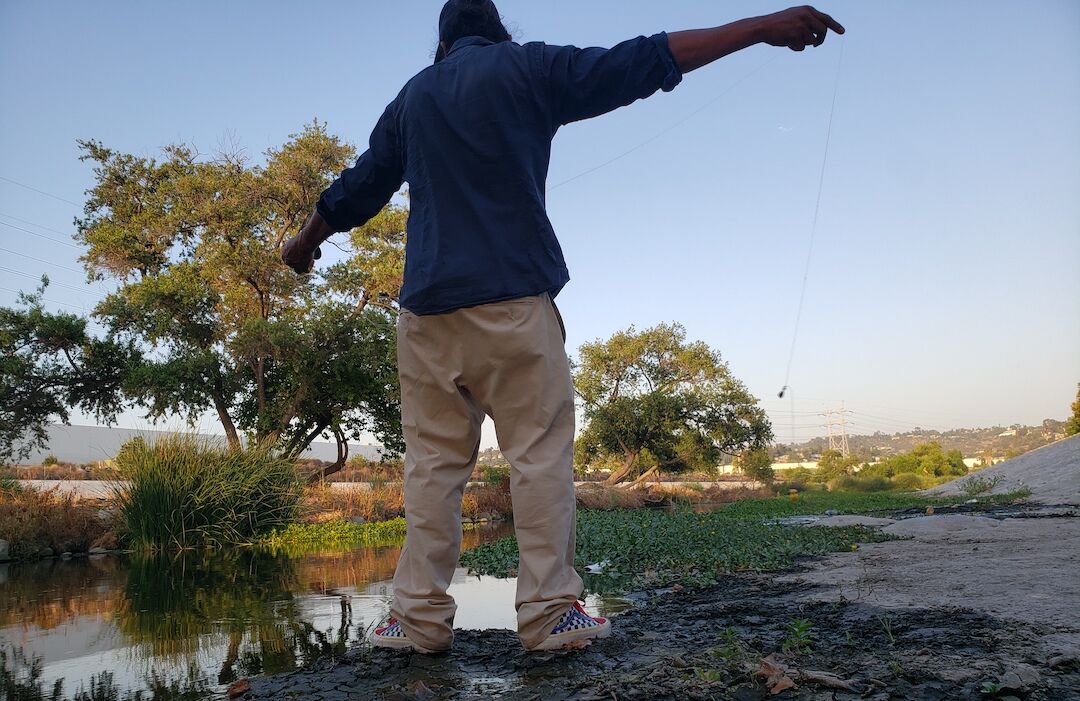 About to cast a line into the L.A. River. 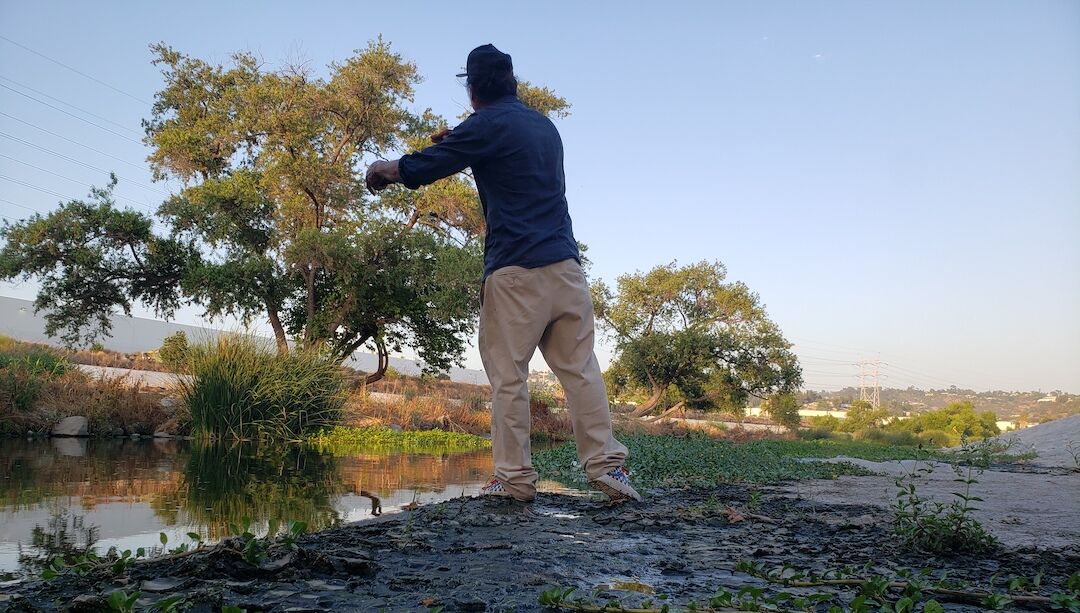 Casting a line into the L.A. River. 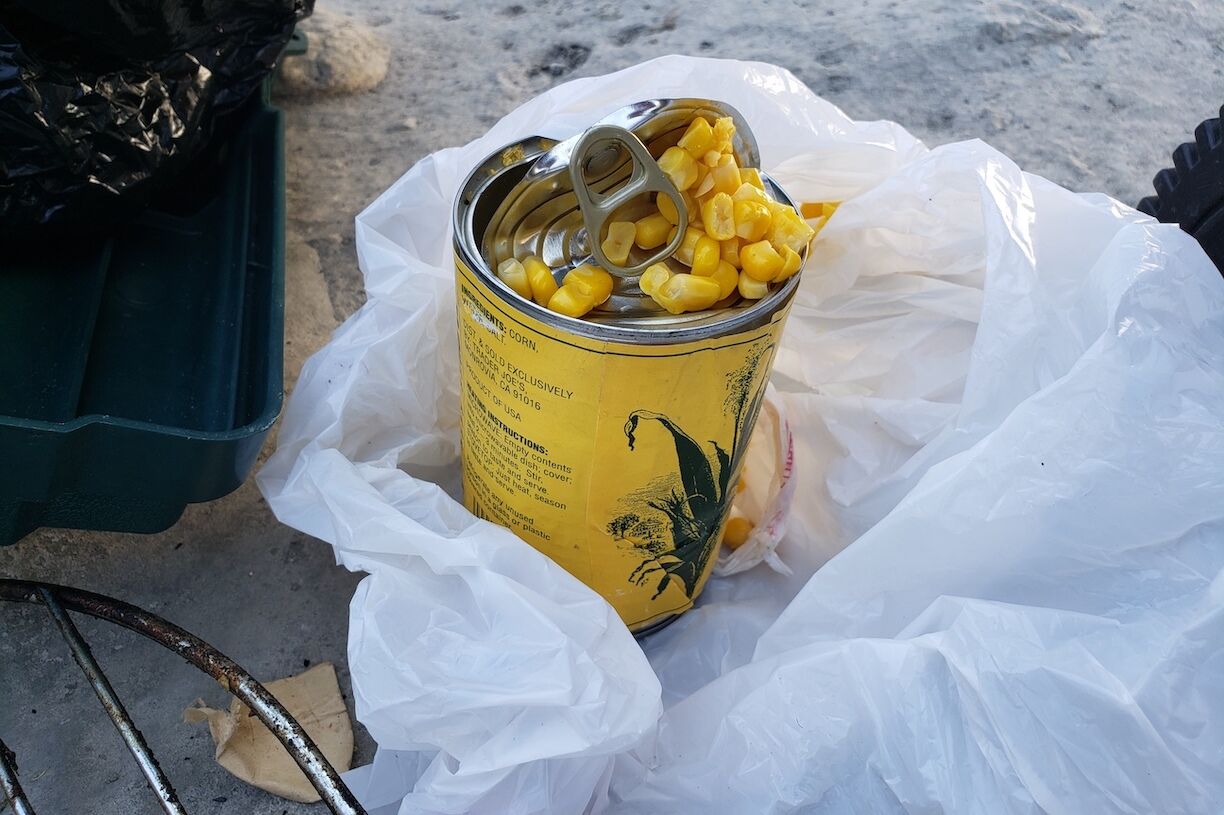 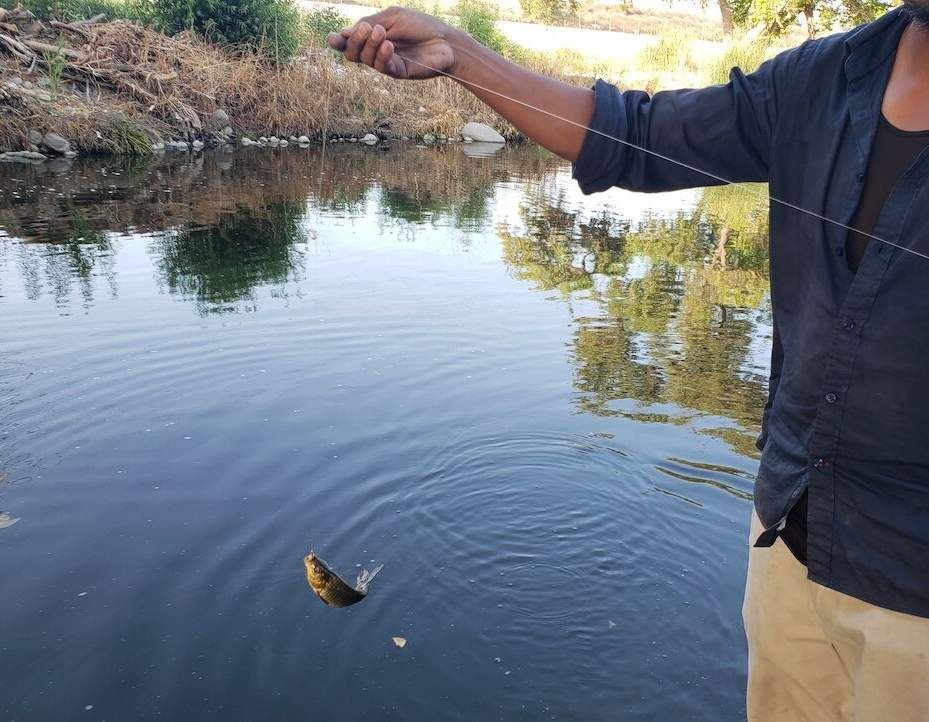 Elysian Valley — The first catch of the day is a square piece of rubber. Maybe from a car? It is, in any case, the only thing from the river that we don't throw back.

We are down at the edge of the L.A. River, five or six of us, under the 2 Freeway. We are fishing, largely without poles. H., who invited me to this, pitched it to me as a story, saying this was a more personal way to fish with just a line and a hook.

“Hand fishing allows you to feel closer to the fish,” he texted me before we got there. “Hence closer to life and things like that.”

But I wrote it. I'm doing everyone in this article a favor and not using names, because I'm not sure how much of this was 100 percent legal. Let’s just assume that all the fishing licenses were in order, as needed. And our wine and beer were non-alcoholic. In fact, forget I even mentioned the wine and beer. .

Fishing near the 2 Freeway

Fishing lines are strung along the cement, baited with niblets of canned corn, or bread, or whatever else is lying around. The hooks are dipped into in the river - water that streams over concrete, runs parallel to the 5 Freeway, flows under the 101, the 134 (a couple of times) and the 5 before it even gets to us. The freeway noise overhead is so constant that I quickly stop noticing it.

“When I saw this river, I thought ‘No way there’s fish here,” H. said, after catching and throwing back a quarter-pound carp. But his fishing journal says he caught five or six carp on July 2. His biggest so far has been eight pounds.

It’s hard to say how many people fish along the Los Angeles River just for fun. I can tell you that someone already had a line in the water not far upstream from us before our party even arrived. I can also tell you that an estimated thousand-plus people each year actually eat what they catch here, according to a report by High Country News. Also the water quality in this stretch of the river in Elysian Valley has been reasonably good, this summer at least - with a fairly low count of E. Coli through July, according to L.A. Sanitation.

Overhead, steel beams under the 2 Freeway are splashed with graffiti - words and names highlighted in flashes of bright colors: “Palm.” “Crash.” “Neko.”

J. explains that you get up there to paint by sliding out along the lip of the I-beam - a way to prove yourself when you’re in a gang. J. said he used to do such things. But he's not so young anymore - at least, not a whole lot younger than I am. These days, you'll see him running a food stand here and there, when he doesn't have a gig as a long-distance driver. He's too old to crawl out onto an I-beam, he said.

“Maybe after I finish my wine,” he added.

Where are the fish biting?

H. moves a little further down the river where his brother, F. just caught a five-inch carp. Concentric circles are bubbling up in the water down there, a sign of something alive. H. casts his line and immediately loses his bait.

After having no further luck, he switches hooks, thinking maybe his red hook has been driving the fish away. But the new hook doesn’t help, and the concentric circles have disappeared anyway.

Meanwhile, someone back at H.'s old spot catches a fish.

It’s starting to get dark. By 10 p.m., the tide somehow seems to be rising. We pack up the barbecue and the cooler and the chairs and the tackle box, and every scrap of garbage including that square piece of rubber, and we start hauling it up the concrete slope to the bike path, and out to Gilroy Street. If we do this again, it’ll probably be at a different location, H. says. If you keep coming back to the same place, neighbors might start to complain.

What did we learn here?

Did we get closer to the fish this way? Well I doubt the carp liked getting hooked. Or unhooked. But humans constantly fall back to a dominant relationships with animals, whether I’m eating a tuna sandwich or getting cheese on my nachos or just dragging my cat to the vet. Or whether we’re building dams and paving the waterway to prevent flooding, erasing just about every kind of fish from the L.A. River as a result, except carp and blue gill.

I don’t think it’s possible to live guilt-free. Nor am I going to try.

Anyway, we threw back all our fish. And we picked up our garbage.

Sunday Story showcases first-person essays as well as fiction by residents. We welcome submissions, but stories must be set in one of the neighborhoods we cover.

Love this story and accompanying photos!