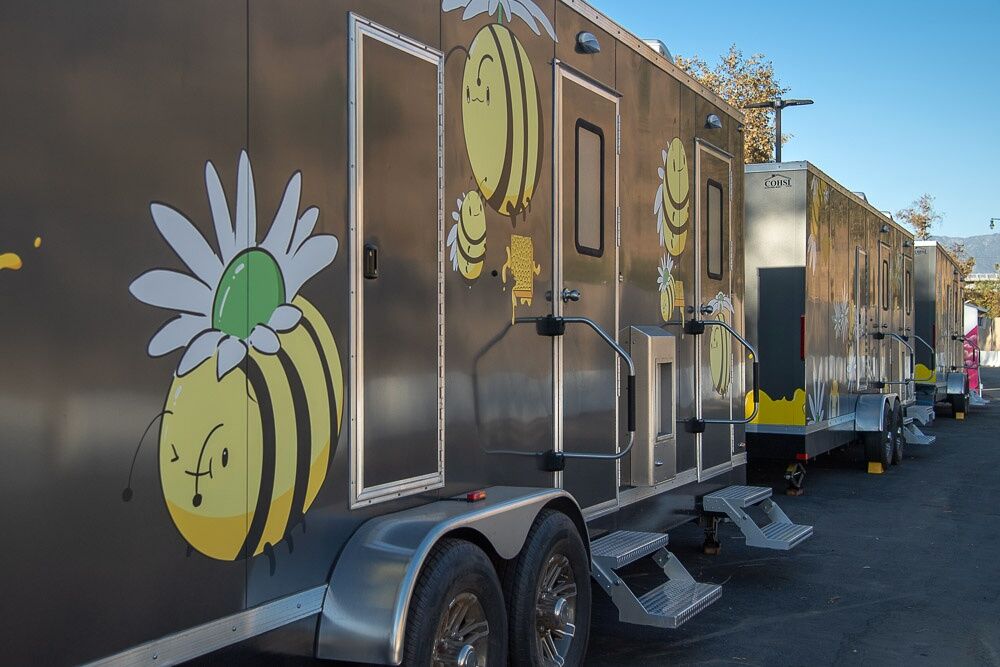 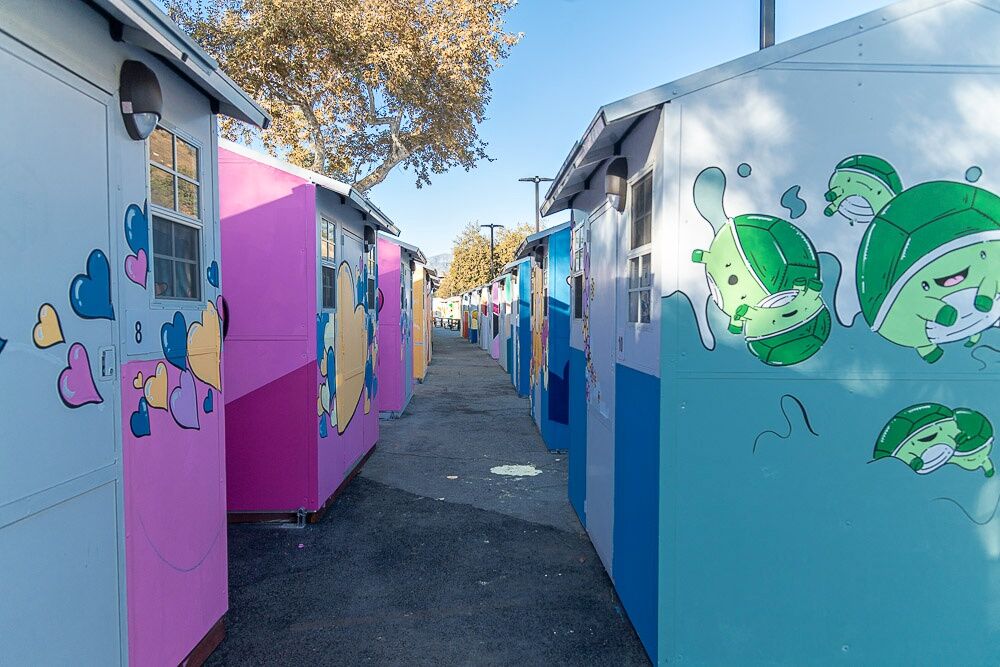 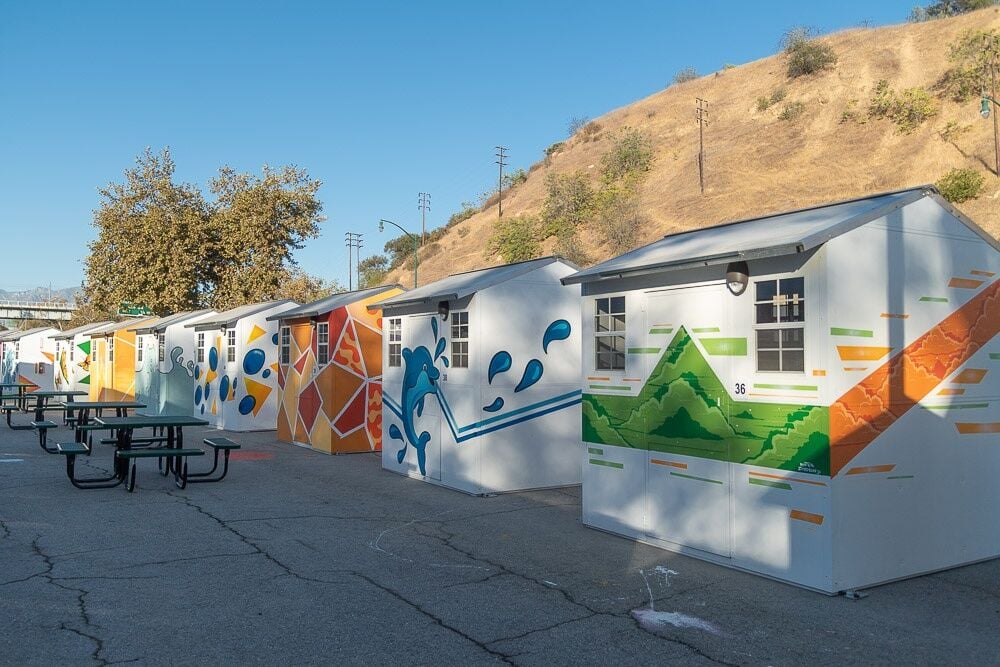 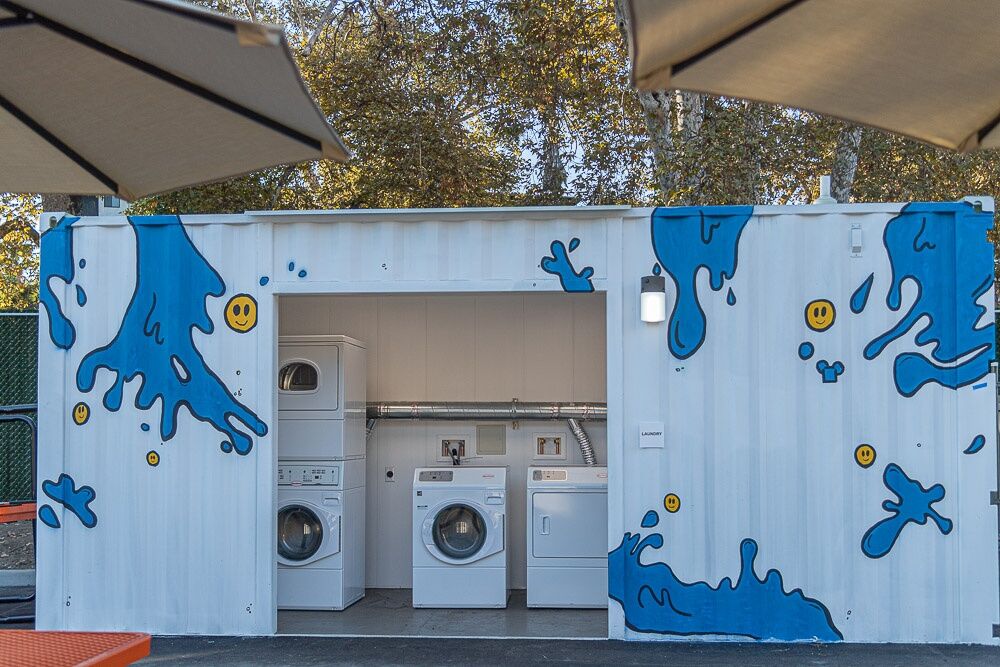 Highland Park -- Maria Pernudi of Highland Park listened to the tour guide who was introducing neighbors and community members to the new Arroyo Seco Tiny Home Village that will welcome homeless residents later this month.

As she was learning about the 24-hour guards on site and other security features, her husband was inside one of the living units, checking out the mattresses. He gave it a thumbs-up.

“I live right down the street and I’m thrilled this is here,” says Pernudi about the 117 pre-fabricated cabins that have taken over a 6.8 acre former parking lot off Arroyo Seco Drive near Arroyo Seco Park. “This is so much better than having human beings living underneath that underpass,” she says. “Here they can be safe, get help and move on.  Here they will be seen as people.”

Pernudi and her husband were among those who attended this weekend's open house at the soon-to-open tiny home village. It will be the largest homeless shelter of its kind in California, according to organizers.

Offering the public tours of the village is a way for neighbors and community members to better grasp how the homeless will be temporarily housed, says Grace Ancheta of Hope of the Valley, the nonprofit that is is managing six tiny home villages in Southern California.  "There is such a tremendous need. This is the epicenter of where the population is. If we don’t have shelter or tiny homes, the longer they are on the street, the harder it is to get them housed,” she said.

Not everyone is a fan of the tiny home village concept. Some activists for the homeless who prefer permanent housing dismiss the prefab structures as nothing more than garden sheds. An effort to recall Councilman Kevin de Leon was apparently triggered in part by his support for the Highland Park tiny home village.

But showing the village and answering questions upfront to residents can calm fears and worries, said Ancheta. She explains that some naysayers have come into the organization’s other tiny home villages ambivalent about housing the unhoused in their neighborhood, but once they leave, most are surprised and convinced that maybe this is a good way to go.

As traffic zipped by from the nearby Arroyo Seco Freeway (a nine-foot tall barrier will be installed soon), groups of curious were led around the colorful artwork adorning each unit. The original designs were the result of a competition on the YouTube series “Instant Influencer” that invited artists to custom hand-paint designs on the tiny homes.

Tour groups wandered up and down rows of units featuring cheery depictions of flowers, peace signs, turtles, blueberries, hearts, sunsets and other calming imagery. Inspirational sayings also are painted on each tiny house. Round happy bees buzzed on restroom and shower trailers. Happy faces on the laundry trailer.

Guests walked inside the units to get a feel of what life will be like for the residents. Made by Pallet Shelter, each tiny home is eight by eight feet and has a locking door, four windows with screens, heating, cooling and electricity as well as a fire extinguisher, smoke detector and carbon monoxide monitor. Most have two beds, but a few units will be accessible for wheelchairs and the disabled. A special touch: a handmade quilt on each bed will become the property of each resident, an item they can take with them when they leave.

The sturdy shelters – which take only 90 minutes to assemble – will offer up to 224 residents a safe place to start a new cycle off the streets, says Ancheta.

Residents will be provided with three hot meals a day along with access to mental health and job training services. Pets will be welcomed. Taking about three months to build, the village was funded and built by the City of Los Angeles but managed by Hope of the Valley.

Residents will be staggered in into their new dwelling units starting the week of Oct. 25.

“It will be about five or so at a time,” says Ancheta explaining that gradually welcoming residents in small numbers will avoid a mad crush for staff, will be an easier transition for the residents, and not stress out the neighborhood.