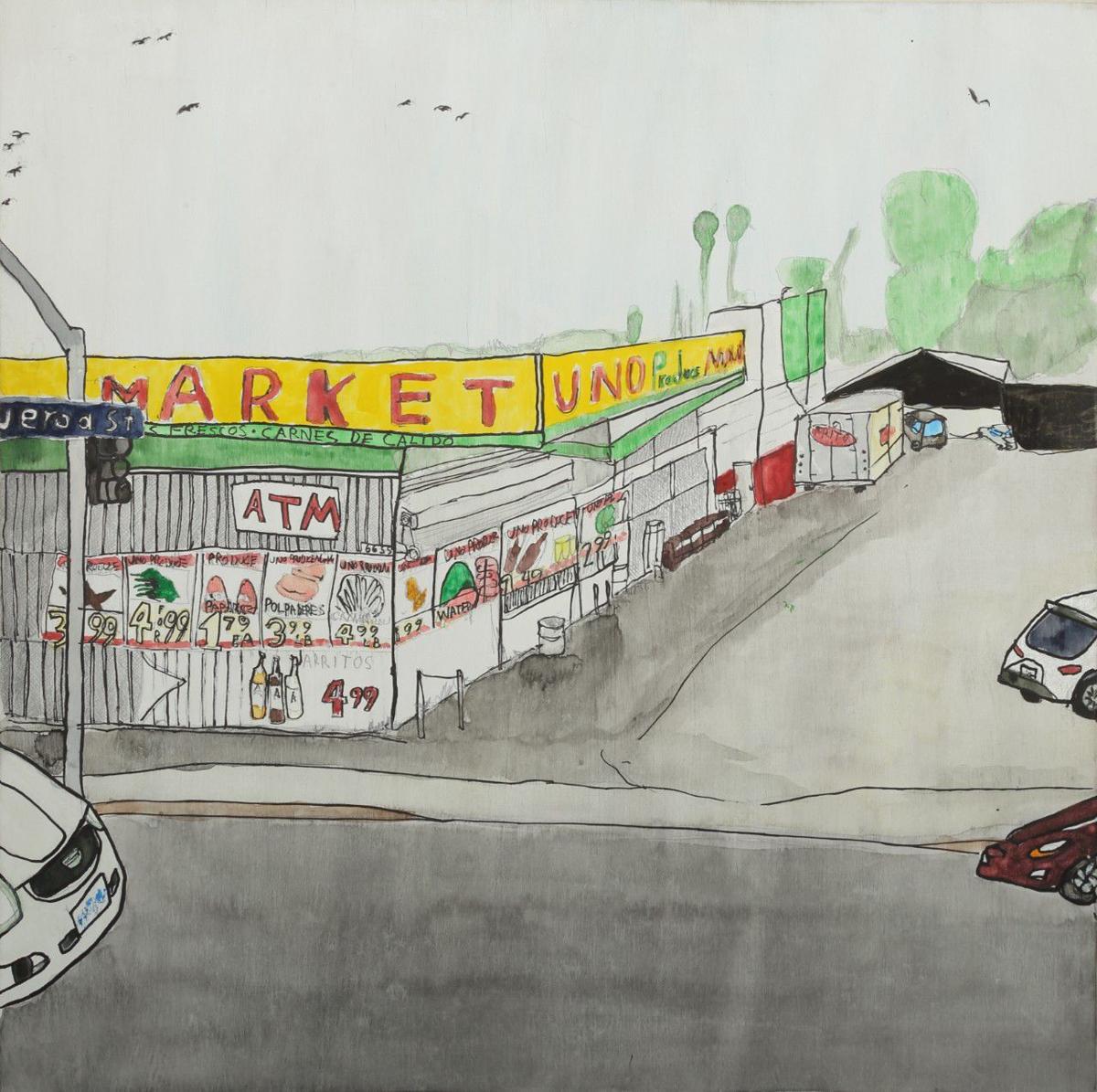 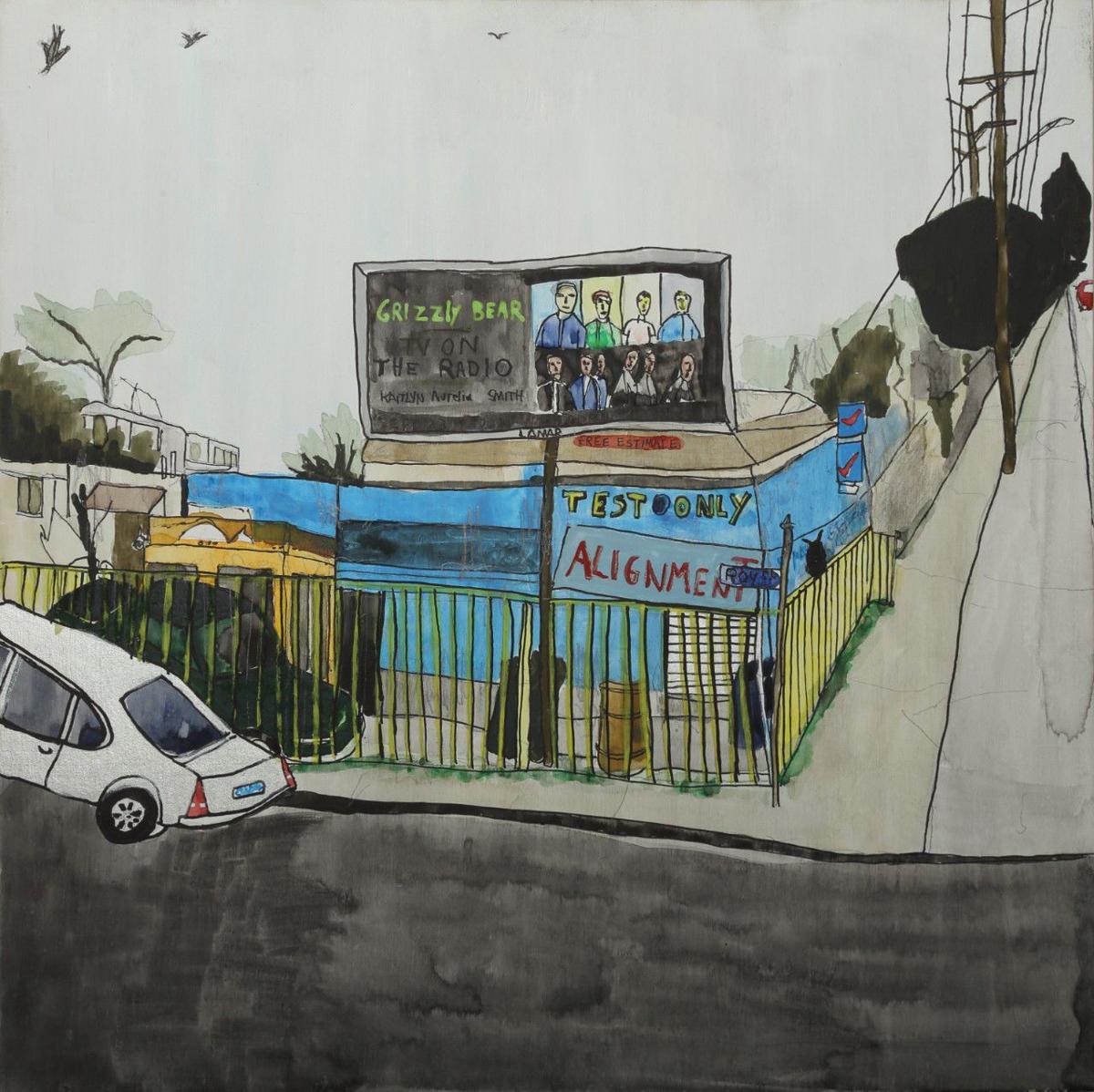 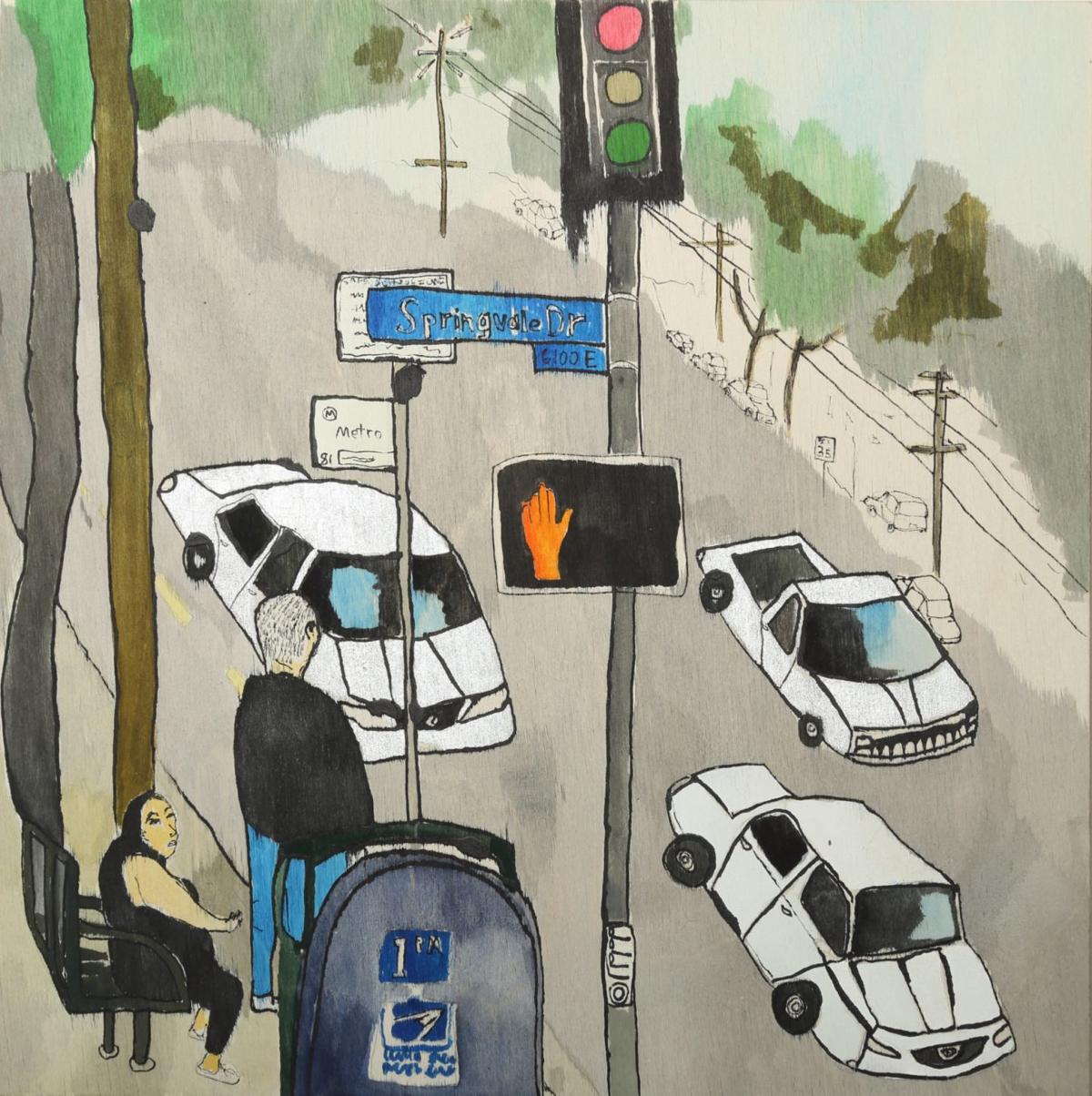 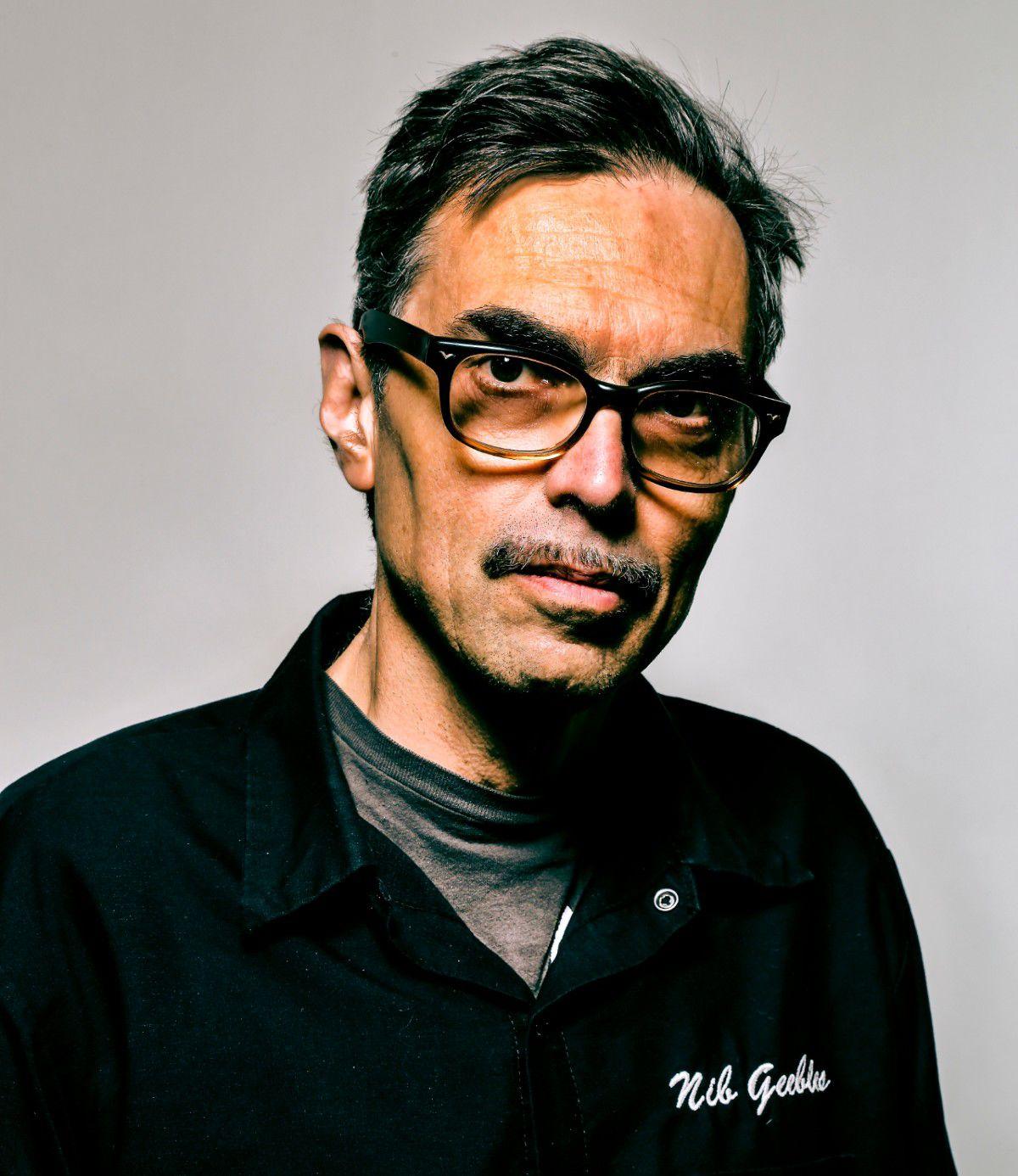 HIGHLAND PARK -- Gordon Henderson is best known for his ink-on-paper drawings of people and animals -- even insects and trees -- floating across blank space in surreal scenes. But in his new collection of work, Henderson applied his quirky style to documenting his rapidly evolving and gentrifying neighborhood of Highland Park.

In “Unknown Landmarks,” the paintings storefronts and street scenes on 12-inch square wood panels serve as an homage to long-time businesses that have been at the heart of local commerce but are also fading away fast.The images are those that the 55-year-old artist came across after he began walking on Figueroa Street on his way to work.

In the following Q&A, Henderson shares some of his experiences in Highland Park and what inspired his new collection.

Since you moved to Highland Park in 2002, how has the neighborhood evolved?

Where I live it’s very residential, the changes have been less obvious than other areas. When we were first here, there was a scene with all the kids on the block, they played in the street every day. One day I went out and there were kids hiding in the bushes in our yard and under the car. I said, “What are you guys doing?” They said, “We’re playing Capture the Flag.” I thought that was hilarious, so old fashioned.

Some of those kids still live here, of course they’re adults now, with families of their own. The difference is their kids don’t play in the street like they did. Now most of the people you see in the street are newer residents, walking their dogs.

What about the neighborhood inspires you?

Even though it’s a big, urban neighborhood, it’s still like a small town. It’s a neighborhood with its own unique style, culture and community and there is a local sense of humor you will find when you talk to people and walk the streets. I love all the home-made type businesses. There’s nothing fancy about them, they were made with modest means and they provide a service. To me that’s the heart of the local community, places like Joe’s Upholstery Auto Service, Uno Market or Cali-Mex Family Market.

Long-established businesses you can’t live without?

Unfortunately, some of my favorites are already gone, like Hawk Refrigeration. They were located next to where Amara Café is now. They were great, they’d come over and fix your fridge or the stove. One time the guy came over, looked at the stove and said, “Holy crap! Holy crap!” For a few minutes he worked frantically, unable to speak. It turned out we had a gas leak. He fixed it. Some of the places I like are closed, but still retain the character of the business that was there, like Smokin Bones or Lucy’s Beauty Shop.

Any new businesses your digging?

I love Pop-Hop Books on York, maybe they’re not new exactly. I like the Apothecary and Gimme Gimme Records on Figueroa and I love Kitchen Mouse. Kitchen Mouse is where the sewing machine repair shop used to be and there was an appliance store there too. Their walls were painted yellow. They fixed our washer once. My dog bit the man when he came over. He never bites anyone, but he bit that guy. It was very embarrassing. Even though I respond more to the older businesses, a lot of the newer places are still small, independently owned businesses. I like them better than corporate franchises.

A quick rundown of your current exhibition?

It’s all paintings of storefronts and scenes on North Figueroa, mostly north of York, done on 12 X 12” wood panel. I’m not known for painting landscapes or buildings. I became interested in the local places after I started walking and taking public transportation, about five years ago. On my way to work I started to notice things. At first I started photographing odd or poetic things I saw on the street, like gloves, balloons, balls and a stuffed shark on a power pole.

After a while I focused on all the local businesses and buildings, beauty shops and auto repair shops I was intrigued with. I started with photographs but ended up making paintings. By the time I did the series of paintings I wanted to celebrate the neighborhood, the way it is now. It’s still a community, it’s still here, but obviously, everything is changing. In fact some of the places I painted, like Obsession Beauty Salon or the Typewriter Repair place are gone now.

Documenting a rapidly changing neighborhood is a significant undertaking when gentrification creates a tense atmosphere. What was behind your decision to create this collection?

Initially it was more for personal reasons than anything else, it was just about documenting the things I see on my daily commute. Now it’s more of a social project. I know a lot of people see these paintings of places they know and they have an emotional response to it. I like that. I didn’t grow up here, I came here as an adult, so my perspective is different from people who did grow up here.

There are several families on my street, who’ve lived here for generations. There was a house up the street; the same family lived there for over 60 years. They had a sculpture of a Pegasus in their yard. One day I noticed that they’d cut the wings off the Pegasus. Then I noticed other changes, over the course of 2 or 3 weeks they removed everything from the yard and the house, and they were gone. It was so sad walking past that now dark house. Then I came home and the house was gutted, then it was torn down. In its place they built an enormous mansion, it towers over all the other houses on the block. It’s an eyesore. That kind of thing happens when a neighborhood becomes gentrified, it becomes all about money.

By moving here when I did, I contributed to the gentrification of the area. That wasn’t my intention, but everyone has a footprint and leaves a mark. By making this painting series I wanted to celebrate what I see as the heart of the area and acknowledge the places that often get overlooked. I also want to encourage ego out on foot and get to know the neighborhood.

Unknown Landmarks will be on exhibit through April 27 at Bermudez Projects, 1225 Cypress Ave.,  in Cypress Park.

Thank you so much for making these wonderful drawings. I grew up in Highland park late 80s , 90s and moved out in 2005. Grew up in ave on York and 56 , and burwood as an adult. I really enjoyed growing up in HLP. We all were fully aware of the dangers of gangs but we would just stay away from their corners or alley ways. It was fun riding your bike and exploring HLP hills and back way paths. Growing up in HLP we knew we were poor specially with south Pasadena , eagle rock , and Glendale so close to us. All those places had nice homes and you could see the difference . But we felt blessed to be nestled right in the middle and have our own little humble community with affordable housing. There used to be a lot of business that have closed down, Henry’s market on ave 56 served our community for 30 years plus , there used to be a pick & save on York and 56. All us kids got our Christmas and birthday presents from Pick & Save. There was a BJ’s comic book store by coco’ s restaurant on York Blvd. Before coco,s restaurant we used to have a Bob’s Big boy burger instead. Villa sombrero on York used to have 4 dollar Margaritas on tues after 4pm , now it’s gone. We had El Guerrero market on York and 56 and el Latino market on Nolden and York . Before Mariscos Sinaloa was there , we had a Gyro place that was known for their chili cheese frys. I grew up in HLP and always thought one day it might be cool if my kids went to the same schools I want to like Yorkdale and Franklin High. I thought it might be cool for them to discover HLP the way I did and take in all the culture. I always hoped to become successful enough to buy a house I don’t need in HLP and move back in my old age. I wanted to move back knowing I could live anywhere else , much nicer places , but now it’s just a dream. I never in a million years could have imagine how expensive the homes became In HLP. I live in Las Vegas and I visit HLP once a year, my neighborhood in Las Vegas is what you would consider a rich people place, full of mansions and Lakes. But I miss my HLP and it truly hurts that I could not go back to my old neighborhood , because the modest poor house I grew up In now cost more than the Mansion with a swimming pool.