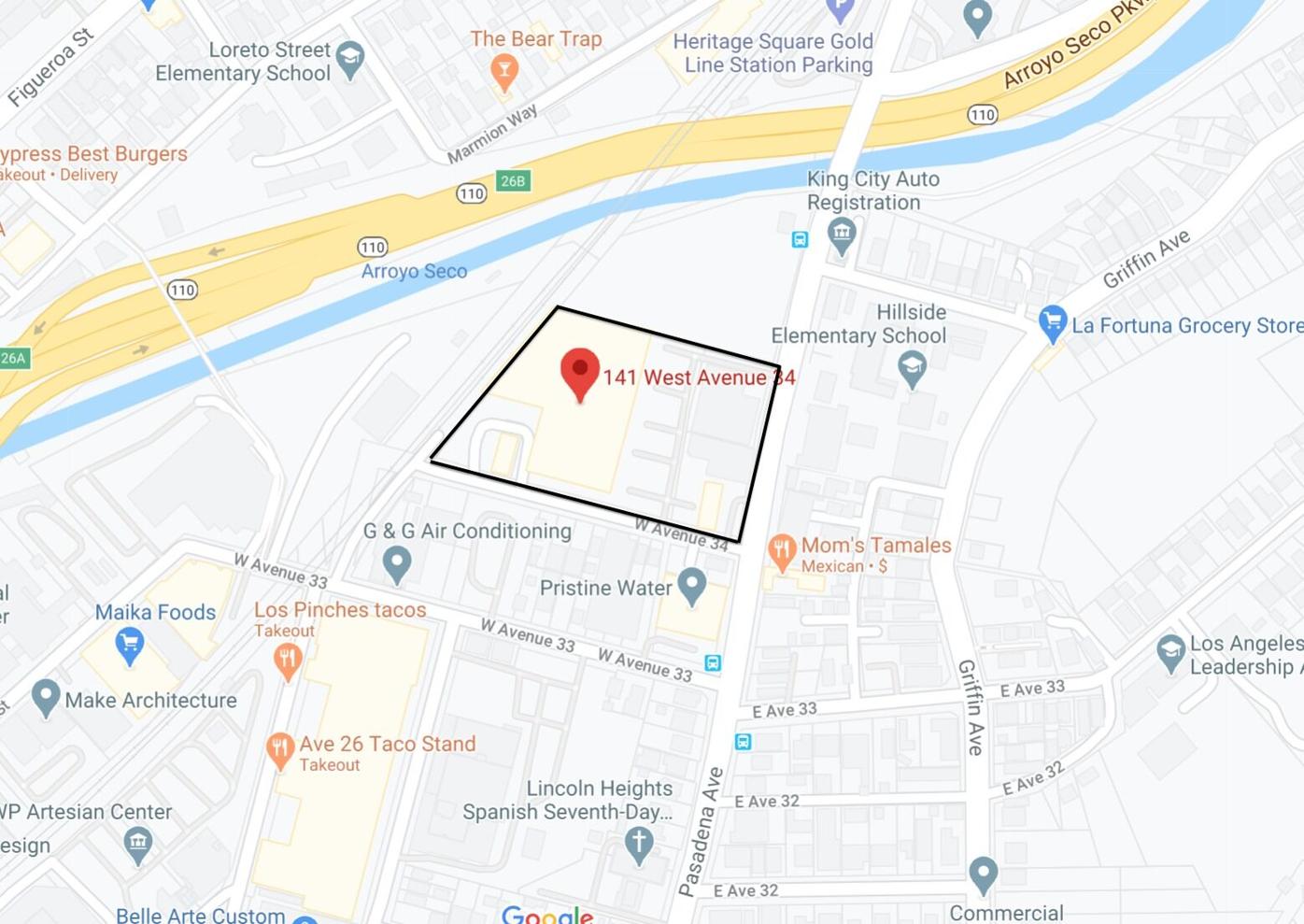 Lincoln Heights - The City Planning Commission today is scheduled to review a challenge to a giant apartment complex that is being opposed by residents.

Update: The issue has been continued to the Planning Commission's next meeting on Aug. 27.

The mixed-use project on Avenue 34 at Pasadena Avenue would be dominated by a trio of buildings with as many as five stories and 468 apartments. The development would include 66 apartment reserved for very-low income tenants as well as more than 16,000 square feet of commercial space.

An earlier decision by the Planning Department allowed the project to be much larger and dense than would normally be allowed since it would include affordable housing and is located near mass transit.

That decision has been challenged in an appeal that will be reviewed by the Planning Commission.

The appeal - officially credited to Patricia Camacho, who identified herself as a neighbor along Ave. 34 - said there are inconsistencies in the Letter of Determination that allowed for the density.

Other residents have complained that the project provides insufficient parking in an area where street parking is already scarce and will generate more traffic congestion on narrow streets.

A petition is also being circulated demanding a public meeting with L.A. City Councilman Gil Cedillo, LA City Planning and the Pinyon Group, a real estate entity associated with Jay H. Stark, who is identified in planning documents as the applicant for this project.

“This is the largest development in the history of Lincoln Heights and the community was never informed or included in the conversation,” the petitioning group said in a Facebook statement.

Indeed, no public hearing has been required for the project up to this point, according to Steve Garcia of L.A. City Planning.

“The previously approved entitlement requests of Transit Oriented Communities Affordable Housing Incentives, Site Plan Review, and Waiver of Dedication and Improvement did not require an initial public hearing,” Garcia said. “An appeal of that determination does require a public hearing.”

The staff report from the Planning Department recommends rejecting the appeal upholding the density increase.

Robert T. De Forest, a principal with the Pinyon Group, told The Eastsider, "We are proud to be proposing a more environmentally-friendly version of the previously-approved transit-oriented development - while providing more than double the number of affordable housing units - without displacing a single person."

I live in Lincoln Heights and this place is becoming a SLUM, Tweekers and Jay-Cats are everywhere now...

The appeal was DENIED. Another NIMBY plot folied. Looks like good new affordable housing will be built here despite NIMBY efforts to kill housing construction on a lot where zero apartments currently exist. This is a win/win for Lincoln Heights and the City of LA.

Except nobody in Lincoln Heights wants this. There isn't enough parking, this plus the project on Figueroa/Pasadena will congest the area, and make it appallingly ugly considering these projects are so out of scale and aesthetically embarassing. It's a win win for developers and corrupt city officials.

Speak for yourself. I live in Lincoln Heights and I support this project 100%. We need as much housing built near transit as humanly possible. We are in the middle of a housing crisis.

Except they need this. Who's to say it's aesthetically embarrassing? Just because you don't like it? It's a win for the 66 families who will live in those affordable units. It's also a win for bringing almost 500 units to a housing starved city.

Appeal wasn’t denied. The case was continued to a future date.

Amazing, this is a ghetto neighborhood and this will only benefit the area. Who the heck is this NIMBY?

Hi Guest, what do you know about the ghetto?

Have you ever even been to this area? Have you not seen some of the beautiful homes on Pasadena Avenue and this is a mere 2 blocks from Mount Washington. You're just an out of touch internet troll slamming a low income neighborhood. We don't need you or your opinions.

No, Lincoln Heights has beautiful homes, but not where this is going to be built. This is an ugly industrial plot of land next to a freeway and some train tracks. Perfect place for this type of development.

Demanding a meeting with Gil? I'm sure he's ready to jump right over. :)