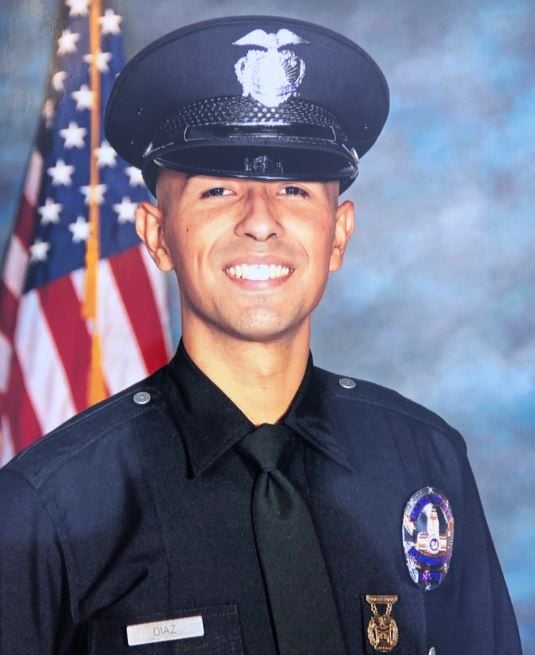 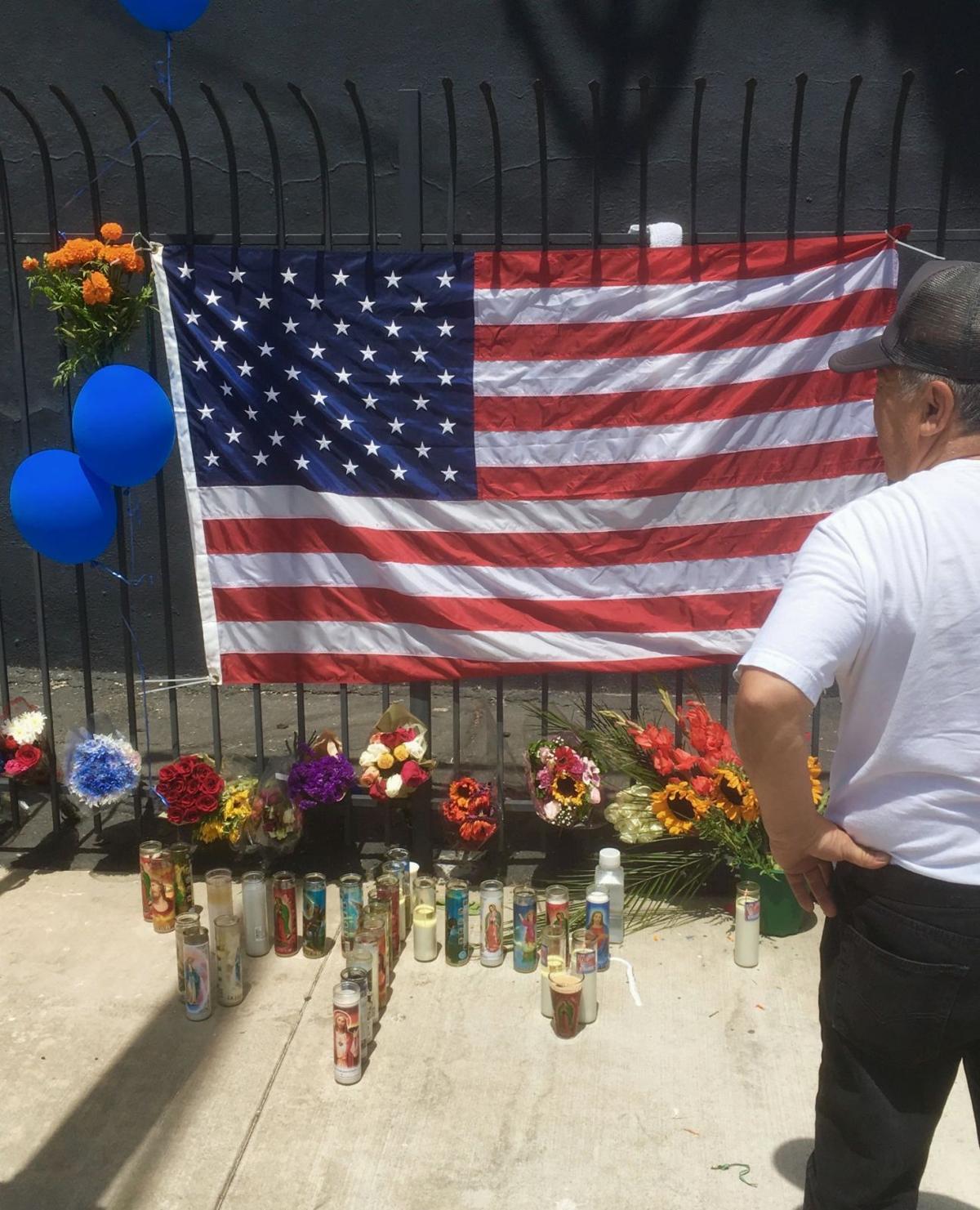 A sidewalk memorial to Juan Jose Diaz was taking shape one day after the off-duty LAPD officer was shot dead this weekend in Lincoln Heights.  Visitors silently paid their respects before an American flag, candles, bouquets of flowers and balloons set up along a fence near Avenue 26 and Artesian Street.  Here's our coverage of the shooting and its aftermath.

Cristian Facundo, 20, of Murrieta, and Francisco Talamantes III, 23, of Temecula, were charged with one count of murder and two counts of attempted murder, along with a special circumstance allegation of murder by an active member of a street gang. Both men, along with another suspect, Ashlynn Smith, 18, of Temecula, were also charged with shooting at an occupied motor vehicle and vandalism.

Smith also faces a count of being an accessory after the fact, while Talamantes was charged with a count of possession of a firearm by a felon.

The arraignment of the three has been postponed until Sept. 11.

"This murder and this senseless violence did not occur in isolation," LAPD Chief Michel Moore said during an afternoon news conference. "This was a part of a larger crime spree."

The trio are accused in the July 27 death of Diaz, 24, who had been with the LAPD for about two years. Diaz was shot around 1 a.m. outside a taco stand near Avenue 26 and Artesian Street, where he had gone with his girlfriend and her two brothers.

Capt. William Hayes of the LAPD's Robbery-Homicide Division told reporters Tuesday that Diaz and his group spotted Facundo and Smith walking on the other side of the street, and saw Facundo bend down and begin painting graffiti on a sidewalk. Diaz and another member of his group questioned Facundo, who became aggressive toward them and lifted his shirt to reveal that he was carrying a handgun, Hayes said.

According to Hayes, Facundo walked away briefly, and Diaz and his group decided to leave the area and got into a vehicle. As the group was leaving the scene, Facundo and Talamantes ran along the right side of the vehicle, and Facundo fired several rounds through the rear window, striking Diaz and another man inside, Hayes said.

The driver fled the area and spotted a nearby LAPD patrol car and summoned help, Hayes said.

Diaz died at the scene, and the other man was critically injured. The off-duty officer was armed but had no chance to use it defend himself, police said.

According to Hayes, the shooting of Diaz came amid a roughly 90-minute crime spree carried out by the three suspects and another unidentified woman. Hayes said that shortly after midnight, the group went to the 2500 block of West Avenue 33 and vandalized a vehicle belonging to a former boyfriend of one of the women. A portion of that crime was caught on surveillance video, Hayes said.

About 20 minutes later, the group went to the 4200 block of Eagle Rock Boulevard and painted some graffiti in that area, after which they moved onto the area of the taco stand in Lincoln Heights, where the Diaz shooting occurred, Hayes said.

Following that shooting, the group went back to Avenue 33 and waited for the ex-boyfriend whose car the suspects had vandalized earlier, Hayes said.

When that person appeared, one of the suspects tried to open fire, but the weapon malfunctioned, and nobody was injured, Hayes said.

Facundo and Talamantes face a possible death sentence if convicted, but prosecutors will decide later whether to seek capital punishment.

Diaz was a native of the northeast Los Angeles area, and grew up wanting to become a police officer.

Read more coverage of the Juan Diaz shooting and its aftermath

2019 kept The Eastsider busy covering all types of stories. But, by far, our most read stories were about neighborhood crime, crashes and othe…