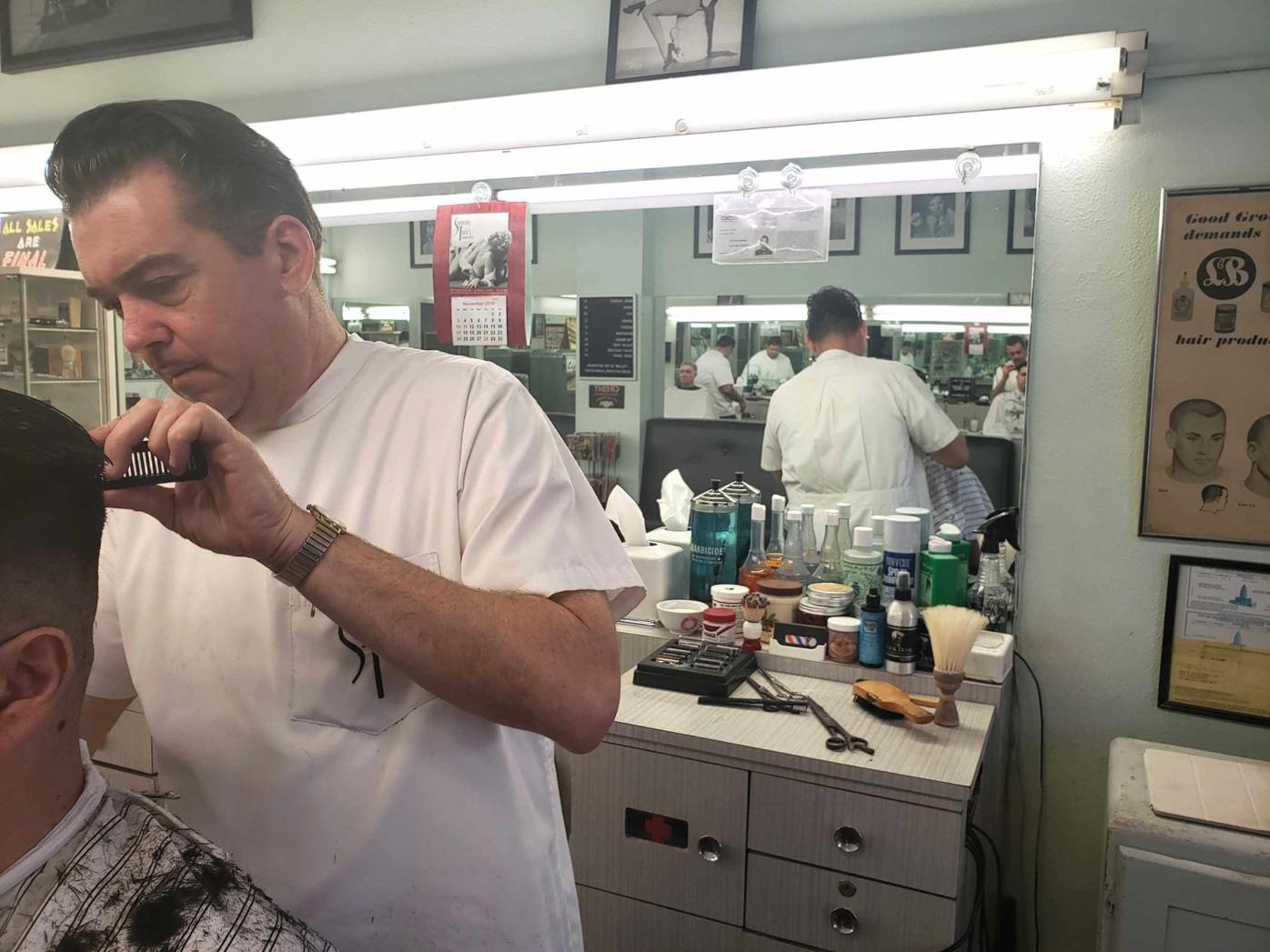 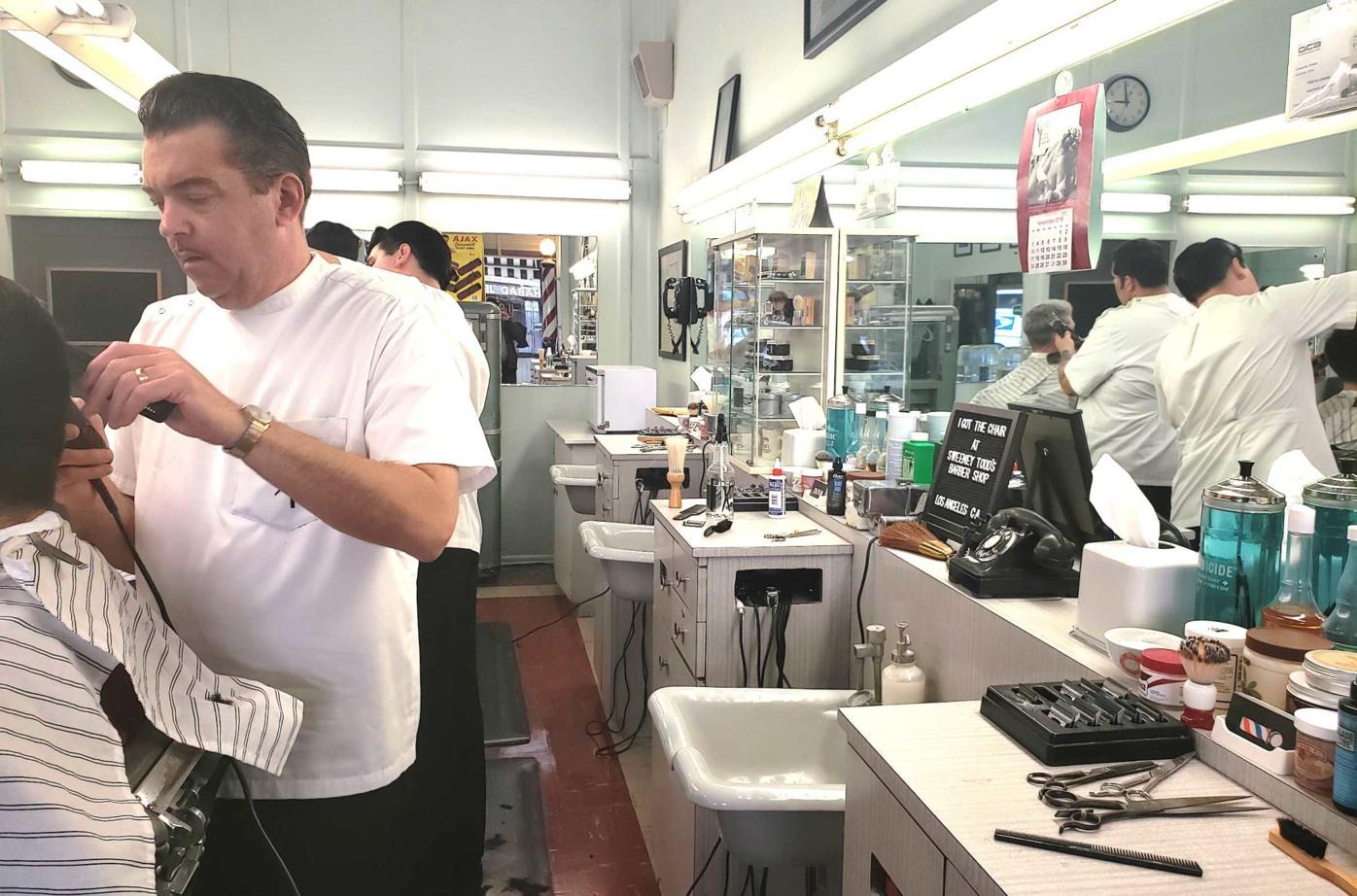 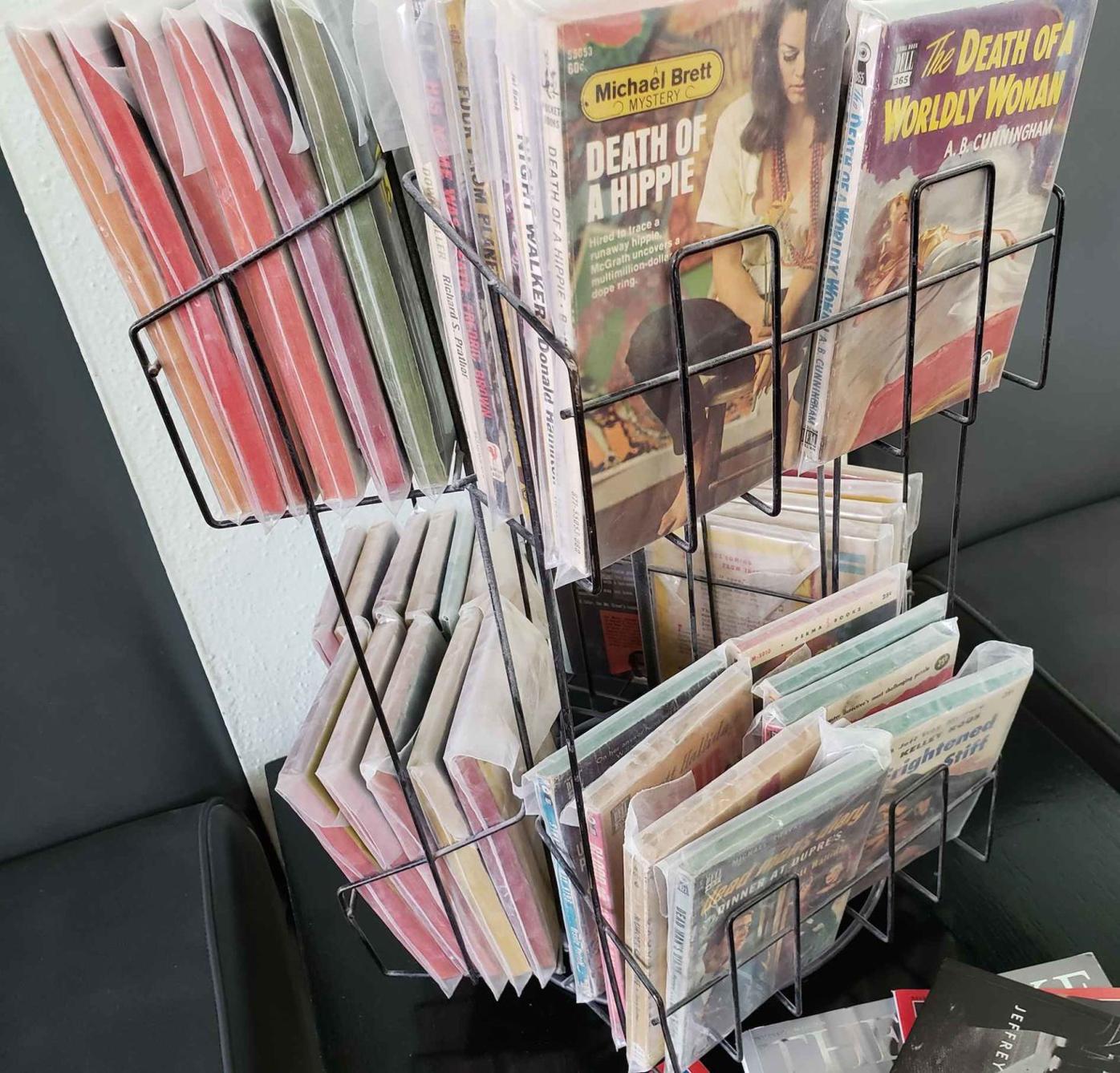 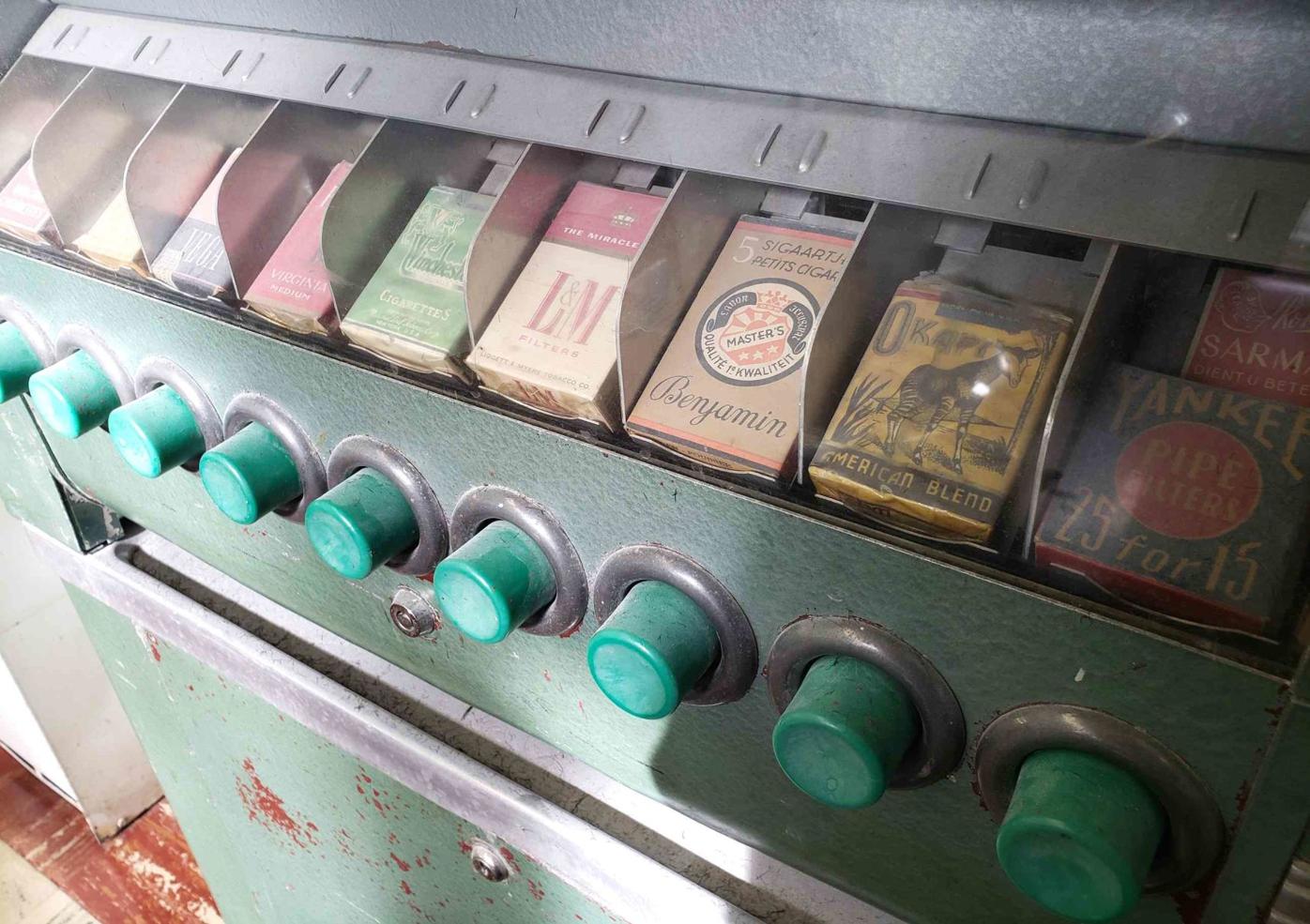 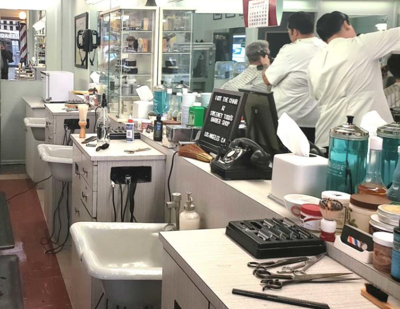 Los Feliz - From the outside, Sweeney Todd's Barber Shop looks like it materialized straight out of the 1950s - with a lighthouse-style barber pole in the window, and the classic chart of “Official Hair Style for Men and Boys”: featuring the flat top, the flat top with fenders, and half a dozen other haircuts that probably haven’t been seen along this section of Hollywood Boulevard since 1966.

But step inside and … well, it’s even more like the ’50s. Original barber chairs. Vintage pulp novels in the book rack. An old cigarette machine with period-appropriate cigarettes.

This has, indeed, been a barber shop since 1957, according to the owner, Todd Lahman, who now just goes by the name of Sween. It was called Andy’s Barber Shop until Lahman took it over in February 2007, renamed it Sweeney Todd’s and started adding to the vintage fixtures that were already there. An antiques lover, taking over an antique place.

Lahman has now become a fixtures himself in the neighborhood, having worked there since the 1990s. He and the shop’s two other barbers give “a staggering amount” of haircuts each year, Lahman said. “Probably somewhere in the low teens of thousands!”

We asked him about his long relationship with the shop, the changes along Hollywood Boulevard, and the luxuries of a straight-razor shave.

Where did you grow up, and what is your history with the shop?

I’m a Navy brat who moved around quite a bit but spent my formative years in San Diego. I moved to L.A. in 1995 with my wife Elvia, who was already from here. I was a cook but had grown weary of my line of work and wanted to pursue a different way of making a living, but wasn’t sure what that was exactly.

Shortly after moving here, I was in desperate need of a haircut, and one of Elvia’s friends recommended Andy’s Barber Shop (now Sweeney Todd’s). Danny Rivas, who had owned the shop since ‘71, was my barber. He was one of those old school barbers who’d been cutting hair since the late ’50’s. He would cut my hair with these gigantic shears called ‘Filipino Shears’ or ‘Pinos’ that were about 12 inches long. He would always give me the best haircut. At the end of the haircut, he would edge me up with a straight razor, so that kind of sealed it for me, with Andy’s being my barber shop of choice.

Over time, I began asking Danny questions about hIs chosen profession. I liked what I heard and, with the support of my wife, began barber college in October of 1997. I started working for Danny after getting my barber’s license about a year later. It was just Danny, Manny (who had been barbering since the late ’40’s) and me at the shop.

How did you outfit the shop with antiques? What was already there? What did you get later?

Andy Torres [who started Andy’s Barber Shop] remodeled it into what you mostly see today, at least what’s nailed to the floors - the barber chairs, the backbar, light fixtures, the neon sign out front as well as the beautiful floors themselves. I added the banquets, the vintage cigarette machine, display cases and most of the artwork you now see.

To be honest, when I bought the place, it was pretty dilapidated. The barber chairs had torn upholstery, the neon sign had long been out of commission, the paint was pealing, there was no air conditioning, and it had an endless amount of junky knick knacks and wall art as far as the eye could see. I’ve loved vintage stuff - especially from the ’40s, ’50s and ’60s - since I was a teenager, so I knew that it needed just the right amount and type of vintage stuff, and a good amount of elbow grease to make it look right.

Since I was an avid collector of vintage things, it was a true exercise in restraint for me, because at home it was an entirely different story!

How has the neighborhood changed while you’ve been there?

When I first started coming to the shop as a patron in ‘95, it was just the shop, Ozzie Dots next door and Wacko next to that. There was a used book store called Aldine’s where Starday Vintage is now and a record store (the name escapes me now) where Hollywood Vintage is. Nothing, really, was on the south side of Hollywood Boulevard. In fact, I would say the street was pretty sleepy for awhile. It probably wasn’t until restaurants like Homestate and Kismet came in about four years ago that it really picked up speed around here.

What kinds of haircuts are people getting these days? What are some other specialties of the shop?

The “High and Tight” style - either combed up in a pomp or much shorter - is still a very popular haircut. But I have been noticing a trend in the last year of guys wearing their hair a little longer than in the past.

We’ve been doing a thing called “The Works” since I’ve had the place — a shave, haircut and scalp massage for $85. That’s the one I throw out there when someone wants to give a gift certificate to someone, and they’re not sure what to get.

What are the advantages of a straight-razor shave over a regular shave?

A straight razor is a much closer shave. As far as having it done in a shop, it feels more luxurious as you are reclined and relaxed (hopefully!). Three hot towels and one ice cold one at the end. We can see every angle of your face, where you really can’t on your own. Just a better shave all in all.