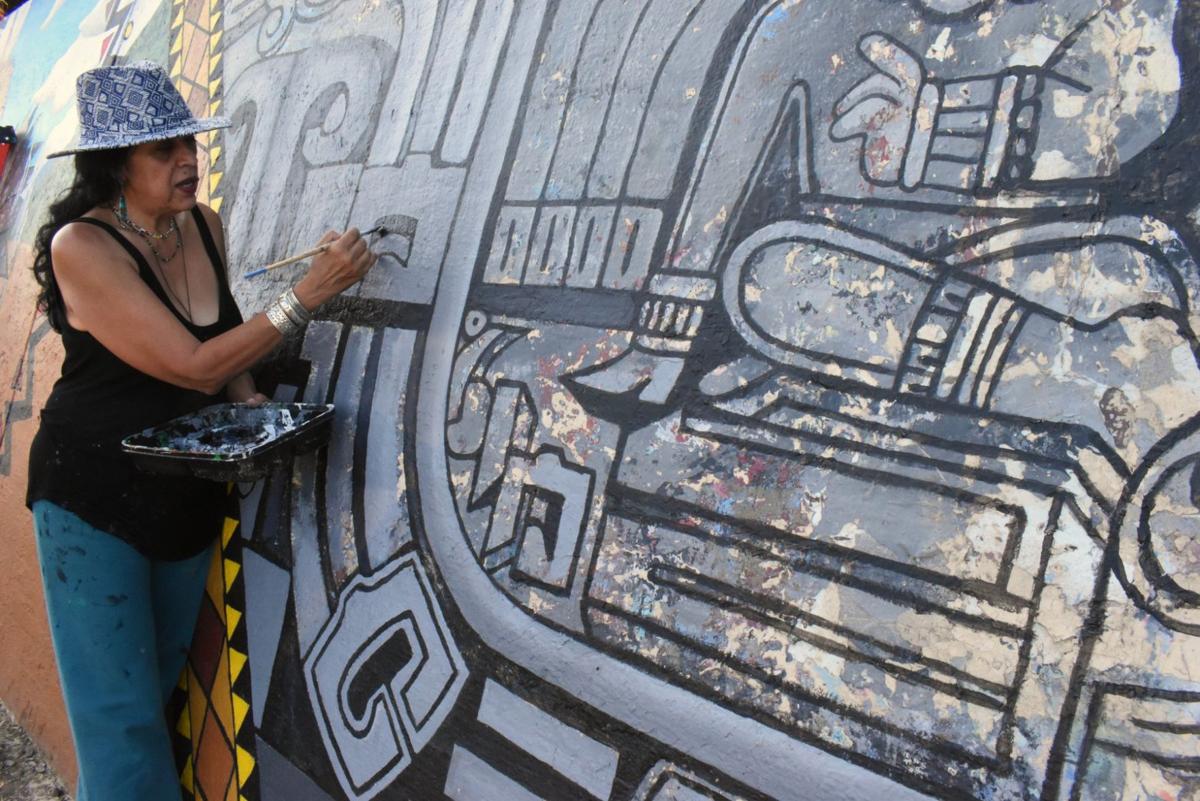 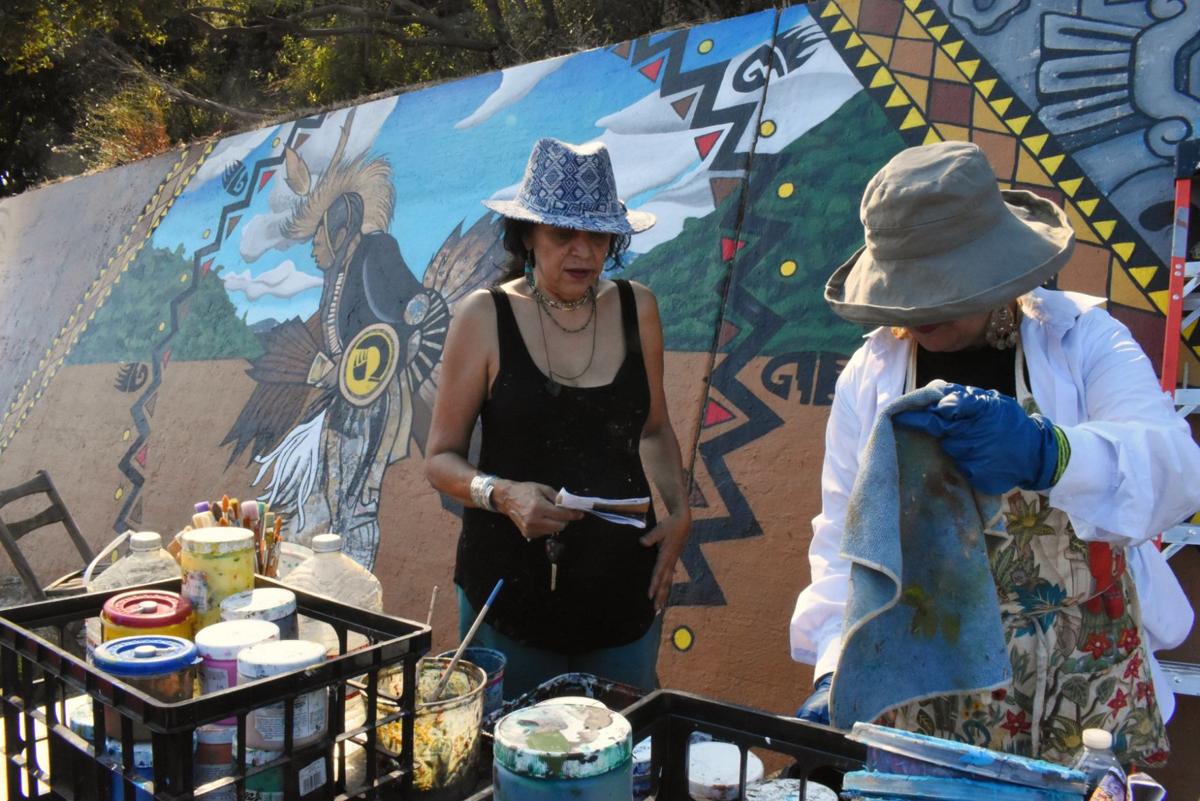 Pola Lopez had occasional help over the summer during the mural restoration. 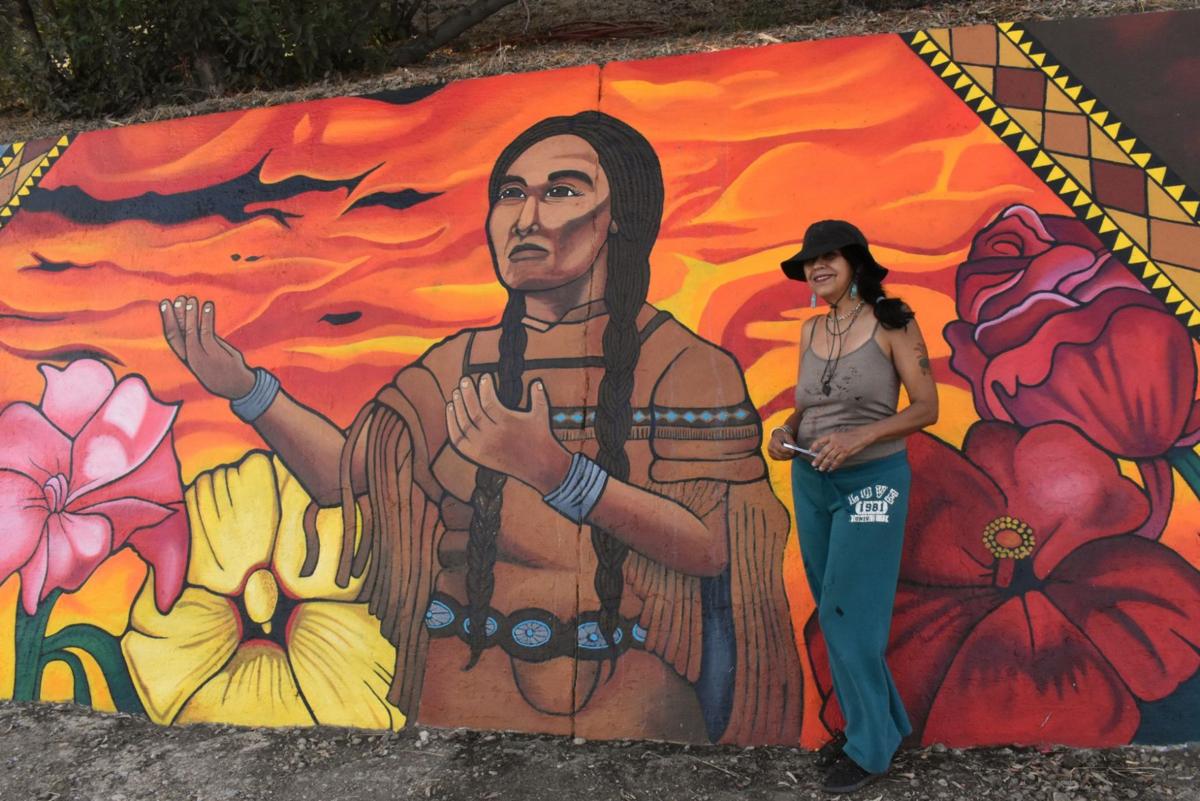 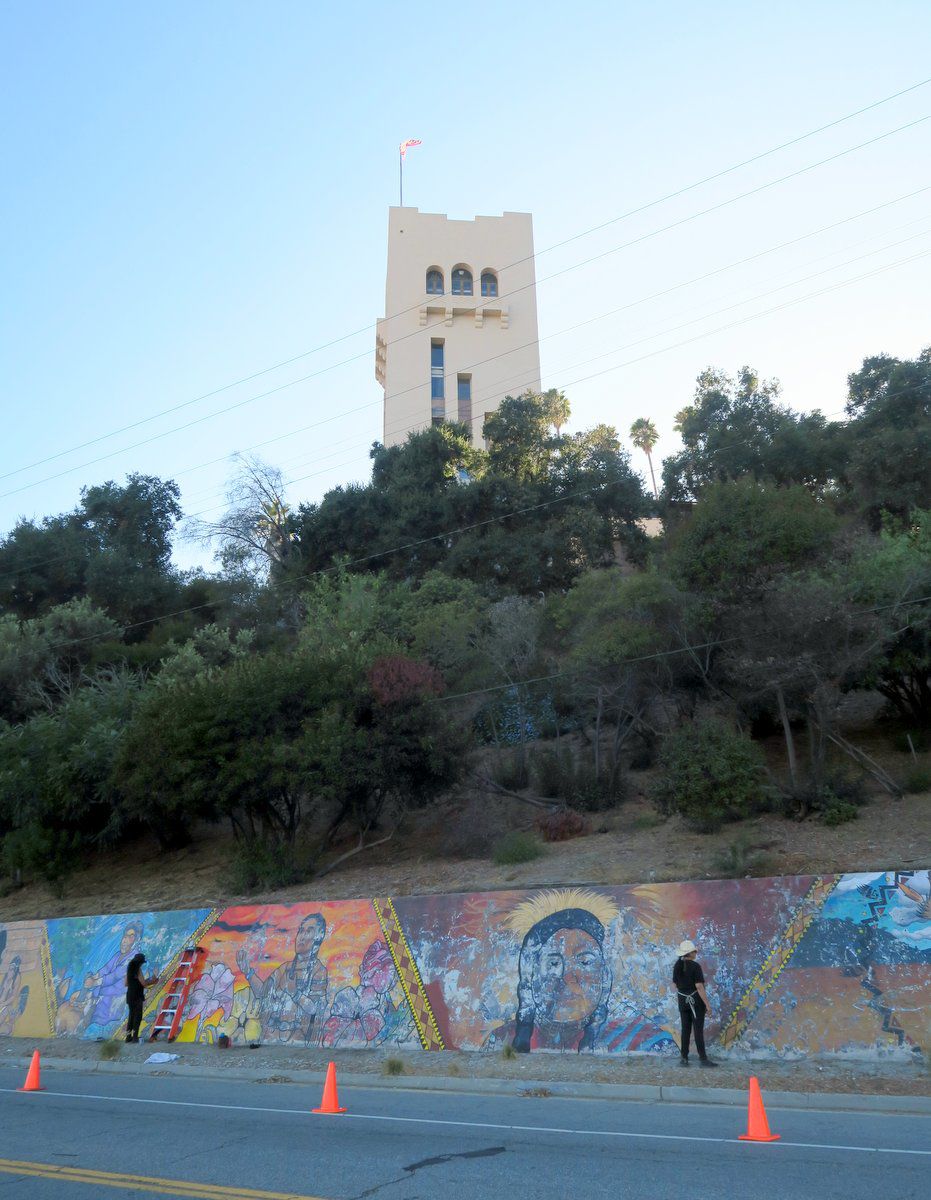 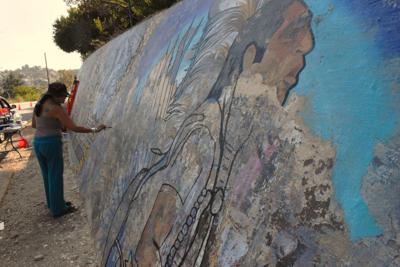 The 170-foot-long “Southwest Museum Mural” that stretches along a section of Marmion Way is in the final stages of restoration. But the job of reviving the celebration of indigenous life proved to be more costly and complicated than expected and left the original artist feeling offended. Writer Nathan Solis talked to those involved about the technical and spiritual tasks to resurrect a piece of public art and the challenges that go with it.

Mount Washington -- Artist Pola Lopez leans against the painted wall and fills out the details with her paint brush. She’s the second artist to put her signature on the Southwest Museum mural, which spreads across a retaining wall at the base of a hill, the tower of the museum looming overhead.

Neighbors stop to chat, while others bring food and water to her as she worked on the mural.

“I’m just grateful that I was able to work on this project because I lived across the street for four years,” said Lopez under her sunhat with her easel at the mural. “The regulars honk as they go by …. “I’ve never seen a community want something back so badly.”

Over the years taggers had marked the retaining wall and the mural was patched over with paint for years. Then one night a vigilante whitewashed it all.

After years of neglect, a committee made up of residents, Highland Park’s Avenue 50 Studio and the Autry Museum of the American West – which owns the Southwest Museum – set out to raise money to either put in place a new mural or more ambitiously duplicate Cervantes’ work.

By 2015, the mural committee approached Cervantes who requested $10,500 for three months of work to repaint his mural. Avenue 50 Studio director Kathy Gallegos said Cervantes was too busy to do the job. But Cervantes remembers it differently, saying he was told flatly that it would not be possible to raise that much money.

But Cervantes understood the importance of having a piece of Chicano art brought back to a community that has seen so much displacement and gentrification over the last decade. So, last year he agreed to sign away the rights of the mural so another artist -- Lopez -- could try to repaint the work.

“I asked if I could somehow be brought in as an assistant,” Cervantes said. “But once they got my signature I never heard back. I was just an obstacle in their way to what they wanted - to bring back this mural that was neglected.”

Over several years, the project to restore Cervantes’ mural would cost approximately $30,000 raised by residents, city grants and the Autry. That’s about triple the budget Cervantes had proposed.

“This process was far longer and more complicated than any of us anticipated,” said Gallegos, the committee member. “We certainly want everyone who has contributed to the project, including Daniel, to be recognized and celebrated.”

Initially, Lopez, an accomplished muralist and artist, said she was prepared to repaint the mural. But there was hope the art still existed beneath the whitewash.

She recommended that the Autry hire conservationists Willie Herron and Leah Moscozo for the job. The pair meticulously removed 16 layers of graffiti and white paint from the mural with chisels and toothbrushes.

“In some places, the mural was attached to the back of a layer,” says Herron. “You have to find that thin layer between and get your knife, pull it away to reveal the art again.”

Herron, from the infamous Chicano art collective Asco, compares restoration work to archaeology and awakening the mural from hibernation.

Most of the weathered mural surfaced and Lopez followed Cervantes’ original work along with her own vibrant colors that speak to her Southwest roots.

Maren Dougherty from the Autry Museum – the institution that donated the bulk of the restoration project - says the mural is one constant brought back to a neighborhood that has seen so much change over the years.

“It’s symbolic in that way,” Dougherty says. “All of us on the committee felt it was important to spend this time to try and bring it back.”

Ongoing maintenance of the mural will require more fundraising, something that was overlooked in the previous iteration.

Cervantes says he admires that Lopez painted the mural on her own without a team of assistants like he had back in 2005. But at this point he does not want his name associated with the promotion of the restoration project.

“When I originally painted the mural, I was 25 and it was nothing but a positive experience,” Cervantes recently told the Eastsider. “I told the committee next time you want to do this - bring back a dead artist’s work because this whole experience has been nothing but a disaster for me.”