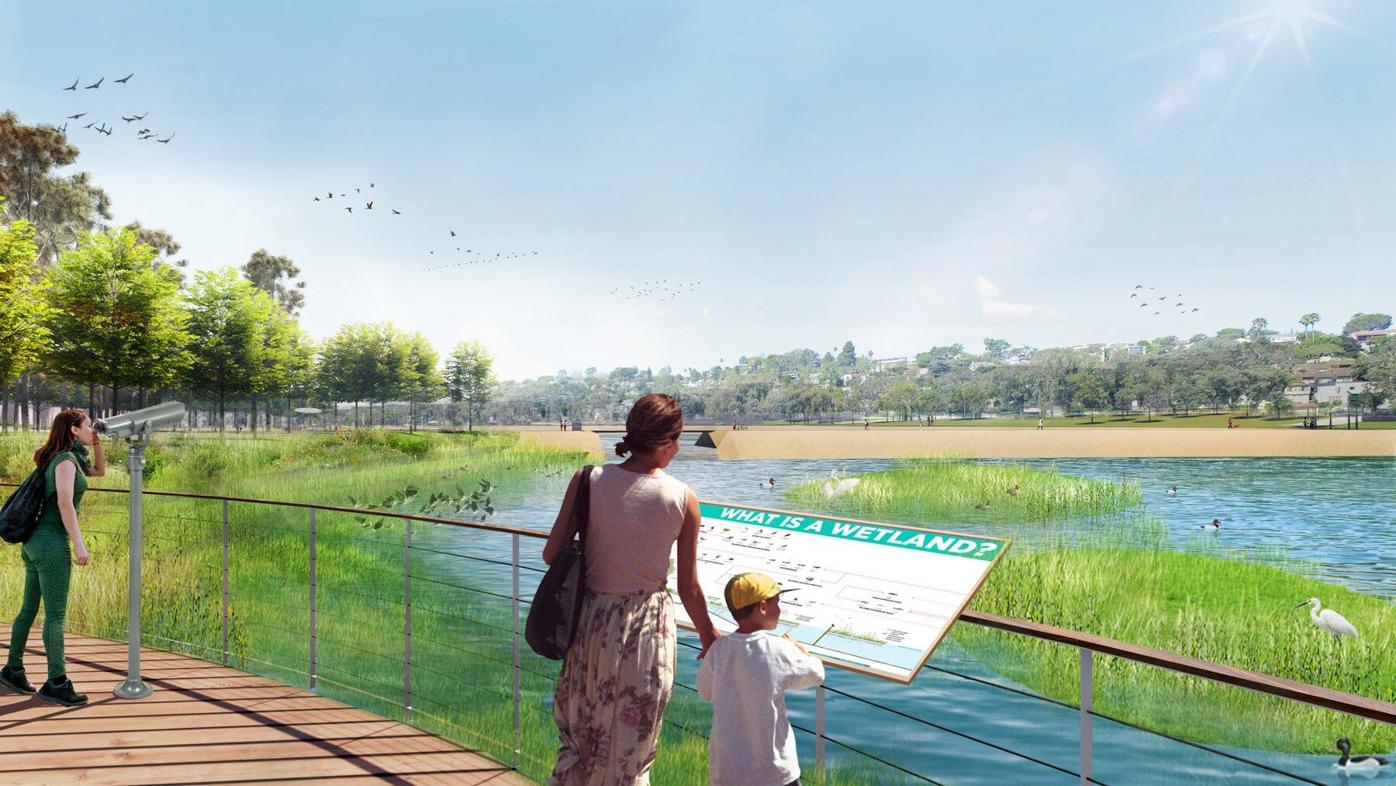 EUCALYPTUS GROVE: At the overlook, both wetland terraces and islands can be observed providing a superb location to learn about their habitat value and water quality function as well as the migratory waterfowl they support. 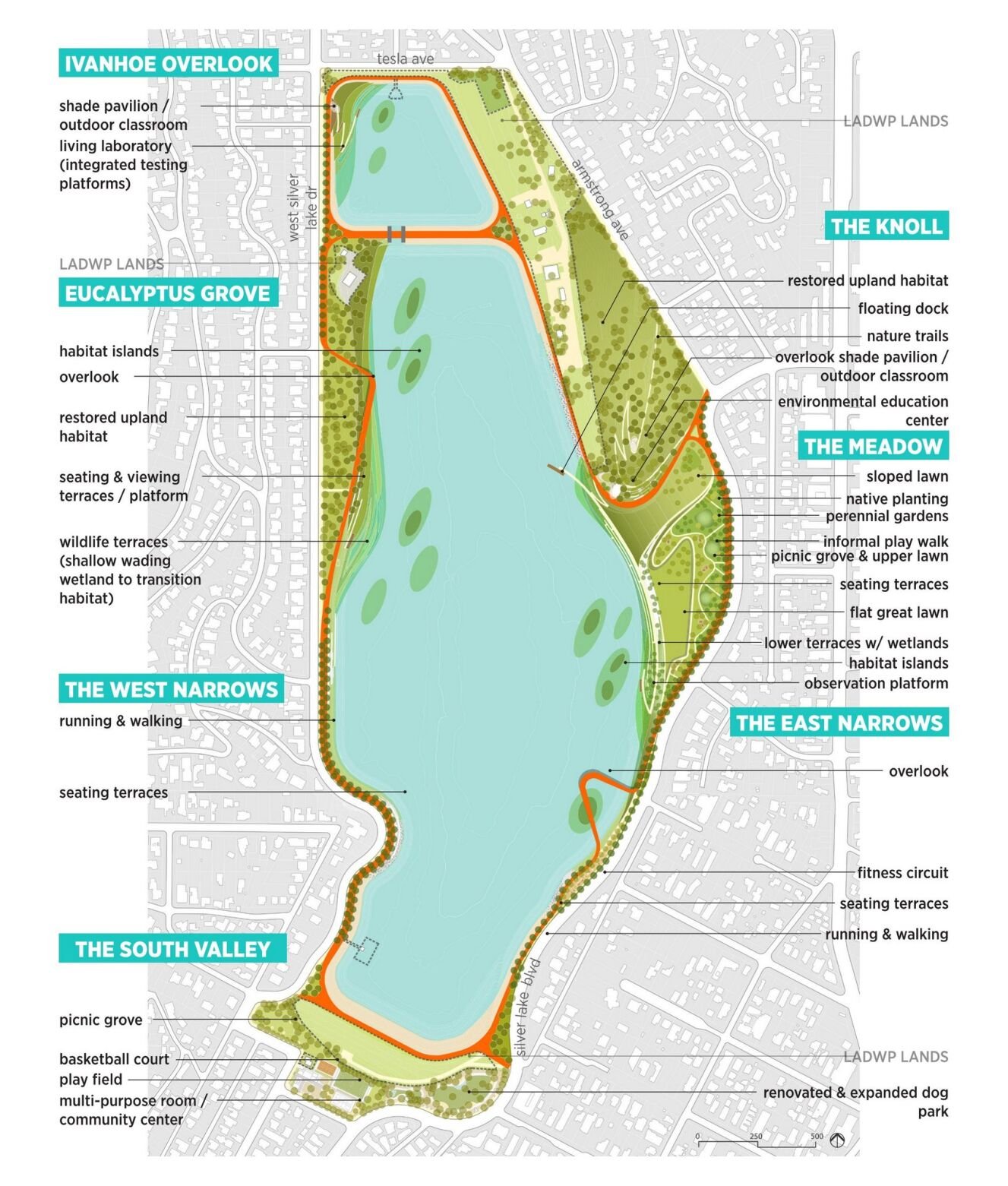 Silver Lake -- After more than two years of planning and public meetings, the city is scheduled to hold a virtual unveiling on Friday of a master plan to shape the future of the Silver Lake and Hyperion reservoirs.

Expect a plan that focuses on "natural features," such as walking trails, sloping lawns, terraced seating, habitat islands, wetlands and overlooks. Still to be decided and debated is how to pay for these changes.

The videos will be posted at 5 pm, Aug. 21 on the Bureau of Engineering’s website.

The planning process that was set in motion when the two large reservoirs were disconnected from the city's potable water system, making them and the surrounding property available for possible recreational and other uses.

Last fall, the Bureau of Engineering released three possible concepts for the reservoirs. More than 4,000 persons have submitted surveys to weigh in on those concepts.

After reviewing the responses and holding workshops, officials in January revealed a preferred concept  that was subject to further public comment.

A public meeting to unveil the final version of the master plan was scrapped in light of coronavirus restrictions on large gatherings. Instead, the department will post videos on Friday describing the final version as well as a questionnaire on several topics, including which of the proposed changes should come first, said Mary Nemick, spokeswoman for the Bureau of Engineering.

The master plan now heads to the City Council for review and final approval.

While the master plan has been completed, the concepts and ideas included in the document will remain just that since no monies have been allocated for those projects.

The Bureau of Engineering provided a Q&A with Deborah Weintraub, Chief Deputy City Engineer, and Meghen Quinn, principal and project manager from Hargreaves Jones, with background on the project.

Q: How did the Master Plan get started?

Weintraub:  When the Silver Lake and Ivanhoe Reservoirs were removed from the City’s drinking water system, this created the opportunity to enhance the reservoirs as a public open space with a focus on greatly improved habitats for urban wildlife. The Master Plan was intended to examine opportunities for improving the natural resources at the site, both the water body and the surrounding land, and adding appropriate public access that would integrate community values, desires, and visions for the use of the land and water.

Q: And who is paying for the development of the Master Plan?

Weintraub: The LADWP is covering the cost of the Master Plan. LADWP will continue to maintain water quality in the reservoirs and their other operational responsibilities at the site, such as the integrity of the dams and their onsite facilities.

Q: And who will pay for the actual development of the site after the Master Plan is created?

Weintraub: That is part of the discussion we are having during this planning process. Master Plans are vision documents - a plan for POSSIBLE projects that may get built if there is community support and if funding is identified. At this time, there is only funding to create the plan.

Which projects get implemented and the timing will depend on ongoing input and support from the community, available funding, an environmental clearance, traffic studies, and the establishment of maintenance and operation agreements. Any project that moves forward will require considerable additional community input, support and vetting by all interested parties.

Q: Did the plan change over time depending on the feedback you got?

Quinn: Absolutely. Every time we met with the community, we did so in systematic steps, allowing us to incorporate feedback and make adjustments to the design. For example, earlier design options included swimming and non-motorized boating, which had a lot of initial support from the community. Later feedback showed less support and those items were removed.

Q: What are some of the elements that will be recommended in the new plan? Things that people agreed strongly about?

Quinn: Overwhelmingly, the community is united in their support of enhancing and expanding habitat for urban wildlife, particularly local and migratory waterfowl. The Reservoir Complex is along the Pacific Flyway and already a stop over for migratory birds. However, when the birds arrive, the complex offers little in terms of habitat value beyond the mostly sterile large water body. The community prioritized improving existing wooded areas and re-introducing wetland habitat for the first time in over 100 years.

In addition to wildlife and habitat, enjoying nature, wellness, and education were also top priorities for the community. The design includes large flexible lawn with shade trees that face the water, ornamental gardens, seating terraces along the water’s edge, an environmental education center, and a network of 5.5 miles of walking paths and trails.

I wonder, has anyone investigated whether the wetlands can do well, or even survive at all, in the reclaimed water? That is not fresh water that you would simply be keeping clean.

Among other things, its loaded down with chemicals to kill the tons of bacteria in it -- will that damage or kill the wetlands too. Its not even simply water, just because it is liquid doesn't mean it is water. That is from the sewage system, and while "filtered," they don't put it through anything like a hepa filter. All the liquid that goes into the sewage system, and plenty of that is not water, is in that and has a different composition, different minerals and other.