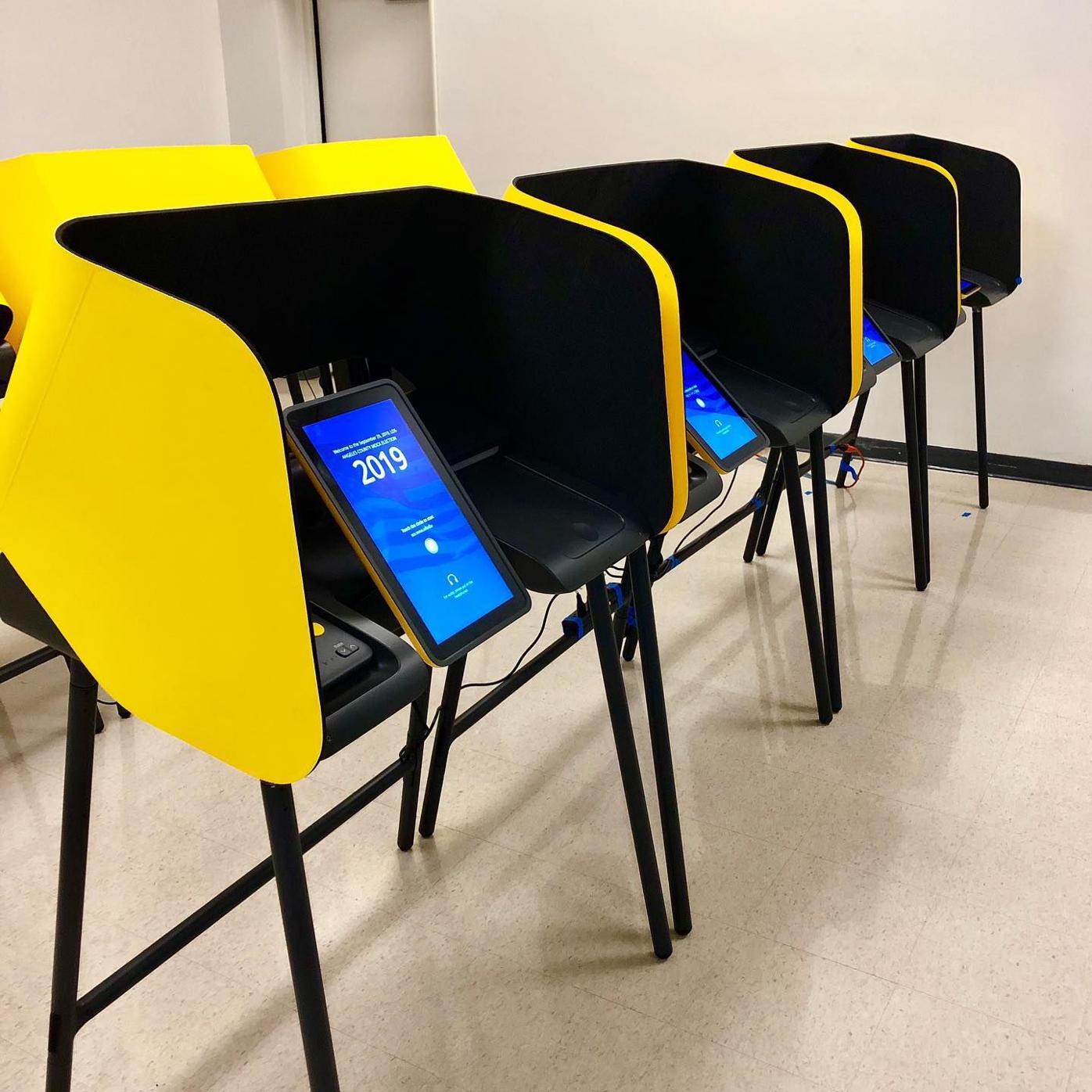 L.A. County's new voting system includes a touch screen ballot but results are tabulated based on a paper record. 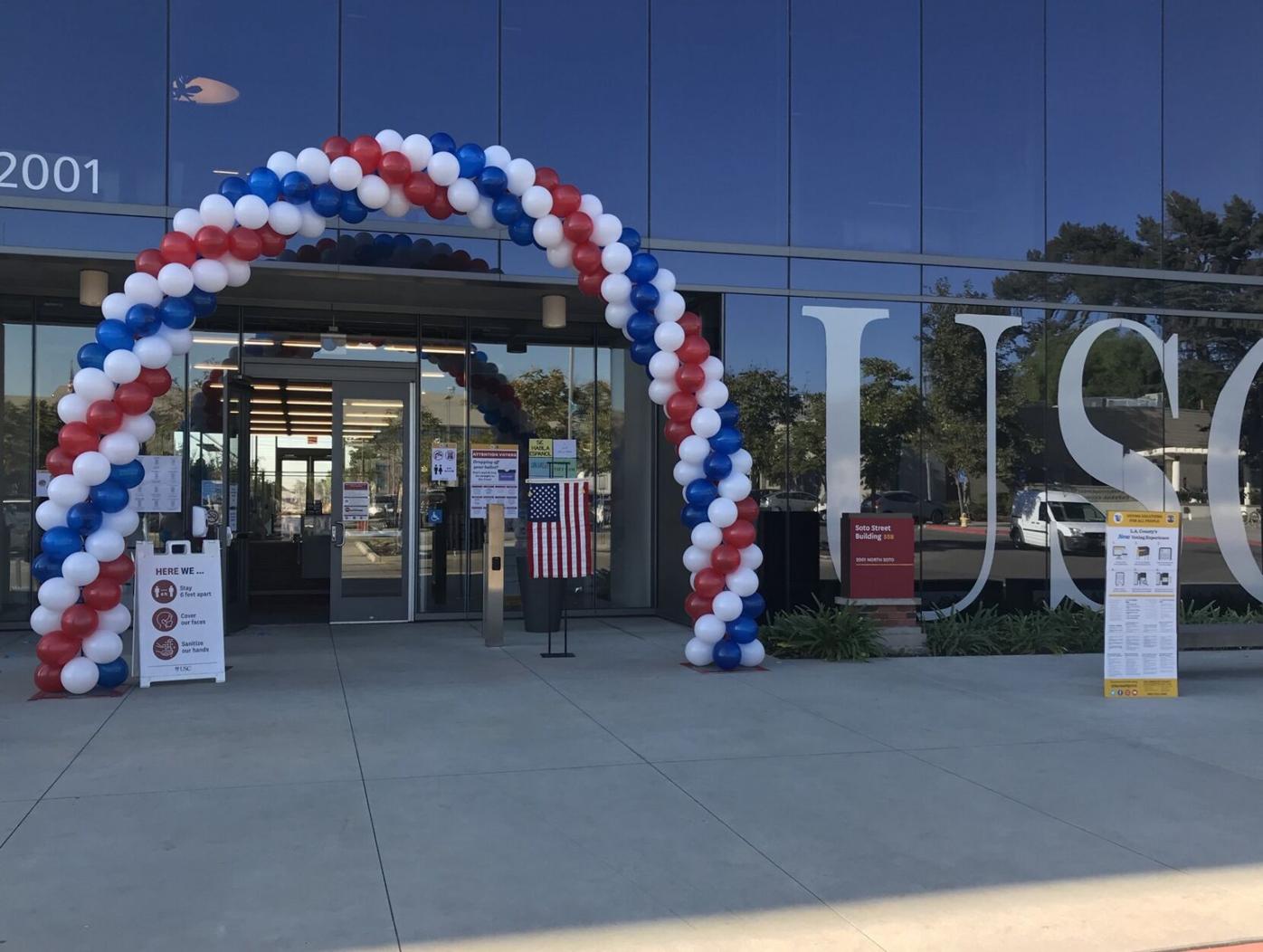 A red, white and blue arch welcomes citizens to the Vote center USC Health Sciences Center  at 2001 N. Soto St. It's one of four Vote Centers in the 90033 Zip Code.

About 650 vote centers in Los Angeles County open today, in addition to the 100-plus centers that opened last week. Vote Center locations include major event venues, such as Dodger Stadium, Staples Center, SoFi Stadium, the Forum, and Banc of California Stadium.

More than 40 vote centers have opened on the Eastside, and can be located through the County Clerk's locator page.

Orange County will also open more than 100 vote centers Friday, including what's being billed as a "super" vote center at Honda Center, home of the Anaheim Ducks.

Any registered voter in the county can cast a ballot at any vote center, regardless of location and the voter's home address. Residents can either use the voting machines at the center or drop off the mail-in ballots that were sent to every registered voter. The centers will be open every day through the Tuesday election.

The vote center concept replaces the traditional precinct system, which required voters to cast ballots at designated locations on election day. Election officials hope the availability of vote centers will encourage people to cast their ballots early, reducing the possibility of long lines at polling places on election night.

The early voting message appears to be having an impact. According to the Los Angeles County Registrar-Recorder/County Clerk's Office, nearly 2 million ballots had already been received as of Wednesday, roughly five times the number that were returned by this point in 2016's presidential election.

More than half of those ballots have been collected from drop boxes that are located across the county, according to the clerk's office.

An interactive map showing the locations of all vote centers is available at www.lavote.net. The website also provides locations of the drop boxes. Orange County residents can find information about vote centers at www.ocvote.com.

According to the Los Angeles County Registrar-Recorder/County Clerk's Office, a tally of all vote-by-mail ballots -- including those deposited in drop boxes -- received prior to election day will be released within 30 minutes of the polls closing at 8 p.m. Nov. 3. A short time later, a tally will be released of all in-person ballots cast at vote centers ahead of Nov. 3.

Orange County election officials will also release a tally of all early ballots shortly after polls close, as will the state.

According to the Secretary of State's Office, county election officials this year were authorized to begin opening and processing vote-by-mail ballots up to 29 days before Election Day, although no results can be released until after the polls close on Tuesday. In past years, counties could not begin processing any ballots until 10 days before an election. The rules were adjusted this year in light of the COVID-19 pandemic and the anticipated surge in vote-by-mail balloting.

Although election officials are urging people to vote early, people who wait til the last minute can still get their ballots in. New rules this year allow the counting of any mail-in ballot that is postmarked by Tuesday and received as late as Nov. 20.

Officials have 30 days after the election to tally all ballots and certify the results.

"On Election Night, we will have a good picture of most contests, but the outcomes of close contests may take days or weeks to settle. This is normal," Secretary of State Alex Padilla said in a statement.

The shift to regional voting centers instead of local precincts means it will be more difficult for the public and media outlets to track what percentage of votes have been counted on election night and how many remain to be tallied.

The previous precinct model allowed observers to track the percentage of precincts that have had their ballots counted -- giving an idea of how many votes still needed to be tallied. But the new vote center system allowing people to cast a ballot wherever they like regardless of residence means it won't be known how many additional ballots are yet to be counted at any point on election night.