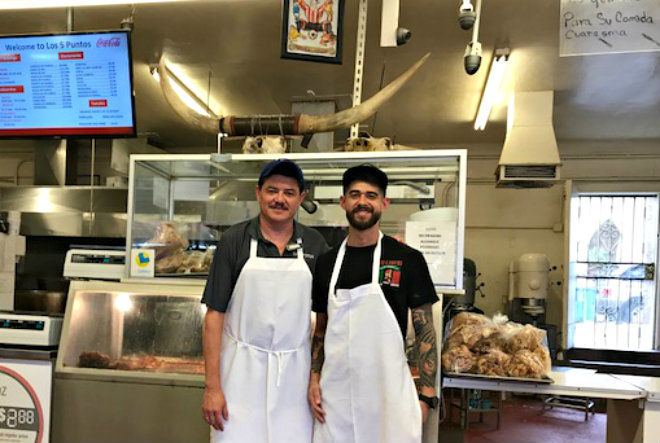 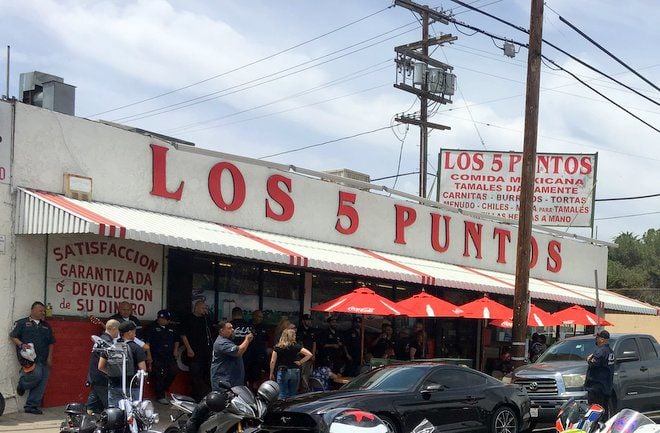 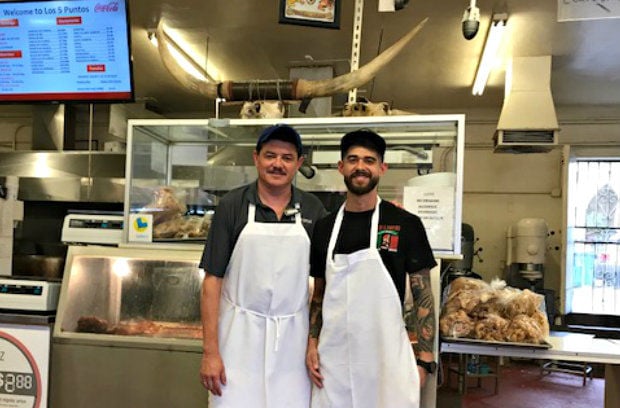 Boyle Heights — Los 5 Puntos, the iconic Mexican deli located at a five-way intersection from which it takes it name, is well-known for its carnitas and handmade tortillas.

Last October, amid Aztec dancers, mariachis and customers, Los 5 Puntos celebrated its golden anniversary and the strong connection it has had with Eastside residents over the last five decades.

Stephen Sotelo, 49, whose parents founded the store, said the reason for its longevity is its focus on quality food, customer service, reasonable prices and treating staff like family.

“I tell my employees, those people out there, they pay our bills. If you don’t treat them right, they’re not coming back,” said Sotelo, who has worked at the store since he was 12 years old. “I’ve grown up with a lot of my customers. They’ve been loyal to us.”

Los 5 Puntos, its large red and white sign overlooking the busy crossroads on the border of Boyle Heights and East L.A., was founded by Vincent and Connie Sotelo, Mexican immigrants. A picture of Vincent, now 96, a World War II Air Force veteran, hangs near the entrance of the store, next to photos of family and of Vincent with store employees at annual Dodgers game outings. Vincent retired from the family business 20 years ago. Connie, 76, still helps out twice a week, and daughter, Sylvia, 51, assists during the winter holiday season.

Stephen Sotelo’s 28-year-old son, Michael, is now the third generation to work in the family business, promoting it through social media.

Before using social media and Groupon, most of Los 5 Puntos’ customers were Latino. Now, the deli gets patrons of all ethnicities.

“(Hipsters) are great because they’re foodies and they love the Internet and they’re Yelpers,” said Stephen Sotelo. “I would say the last three years, because of the [new] tables and social media, business is up 25 percent. It’s pretty solid.”

The most popular item on the menu is the two taco combo with a 20-ounce drink for $6.99.

Monica Martinez Vega, 42, who has been working at the store for 20 years, remembers when celebrity cook, Rachael Ray, visited the deli and declared it as having the best tacos on the West Coast.

Inside the deli, multi-colored piñatas currently hover over red and white Coca-Cola tables and stools. Behind the counter, large pots of meats simmer in their juices. And over a giant, 5-foot by 10-foot comal, two women make thick corn tortillas by slapping masa into shape.

On a recent Tuesday, a diverse lunch crowd formed a line to the entrance. Maria Isabel Virjen, 59, of Montebello, a patron of 30 years, ordered a chicharron taco and a beef taco, both topped with the signature cactus topping and habanero salsa.

She stops by about three times a week to pick up food for her and her husband. During the Christmas season, she buys masa to make tamales at home.

“Everybody greets me, they’ve all treated me well. I have no complaints,” Virjen said. “If I don’t get treated right (at a business), I say the hell with you. That’s the most important thing about a business, how they treat you.”

When Los 5 Puntos opened in 1967, the family sold food by the bulk, including carnitas and handmade tortillas. Over the years, they also tried a butcher counter and at one point sold Mexican baked goods. But as time went on, they dropped the butcher’s counter and the pan dulce due to competing panaderias and carnicerias.

Then about 20 years ago, Sotelo and his father decided to focus on the bestsellers, carnitas and tortillas. They created a “Mexican super cocina” menu, which includes most of the items sold now, like tortas, burritos, tamales and chicharrones.

“We kind of adjusted with the times when we needed to,” said Sotelo.

Which might explain why Cinco Puntos is still in business.