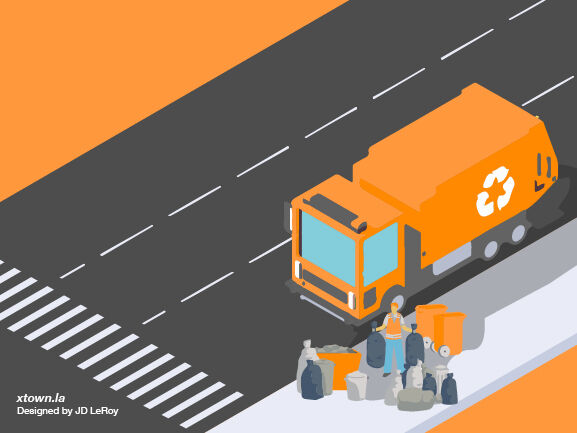 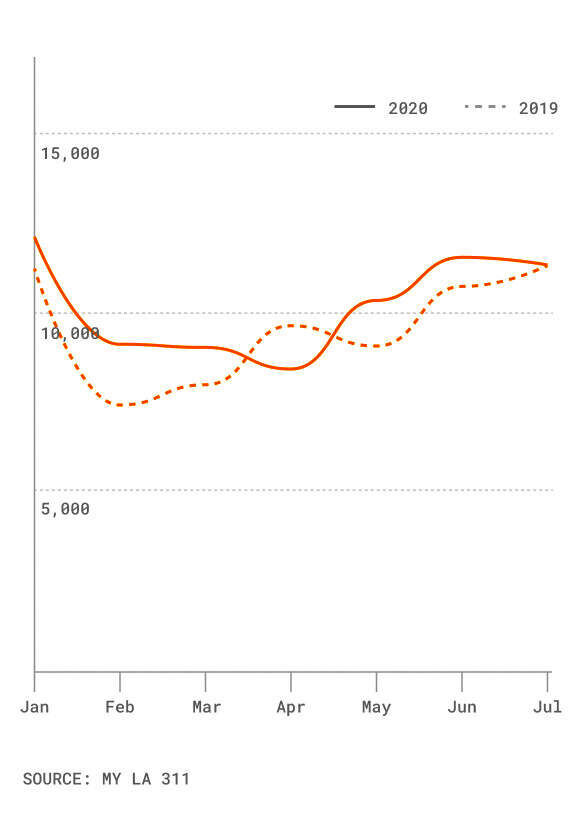 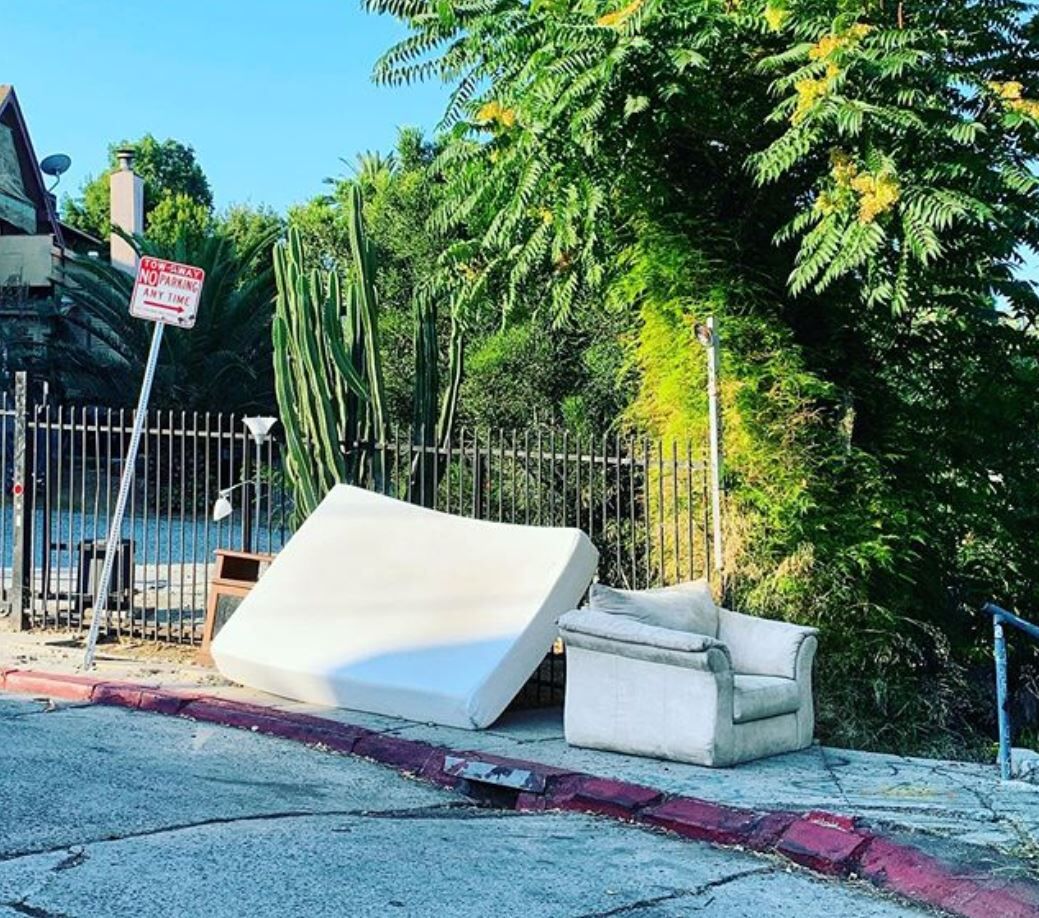 If you think the sidewalks have been more cluttered than usual with abandoned sofas and furniture, you would be correct. In fact, the city received 71,973 service calls for illegal dumping in the first seven months of the year, says Crosstown in a report in The Eastsider. -- that's up 7% from the same period last year's record-high levels.

The original version of this story appeared on Crosstown.

In 2019, the City of Los Angeles broke a record for requests to respond to illegal dumping, with more than 123,000 calls to haul away mattresses, shopping carts, couches and other items abandoned on streets and sidewalks.

This year, with millions of Angelenos spending more time indoors and finally getting the chance to clean out those cluttered closets and basements, the city is on pace to surpass that figure, and some local garbage hauling is increasing by more than 85%.

According to a Crosstown analysis of My LA 311 data, there were 71,973 service calls for illegal dumping in the first seven months of the year,  a nearly 7% jump from the same period last year.

Sanitation bureau representatives say the increased dumping comes from a number of factors. In the COVID-19 era, some people may be reluctant to bring old or bulky items to places where they can be donated, and instead just drop them on the sidewalk. Other times, people may be complaining about items on the street that appear to them to be trash, but belong to people experiencing homelessness.

Dumped or bukly item pick up requests from Crosstown
Infogram

Homelessness increased by 16.1% in a year, according to the most recent count by the Los Angeles Homeless Services Authority (which was conducted before the arrival of the coronavirus in the city). Homeless rights advocates have criticized the clean-ups, which can involve people’s personal possessions being removed or destroyed.

But Jose “Pepe” Garcia, assistant general manager for the LA Sanitation & Environment bureau (also known as LASAN), and the person who oversees the city’s response to illegal dumping, said most of the calls his bureau receives are not related to homeless individuals, and have more to do with the “disposable” economy, as residents report problems caused by apartment dwellers or homeowners getting rid of old furniture or other large items.

Garcia said other times the problem stems from people outside the city who bring their debris into Los Angeles, or businesses–including construction and demolition crews–that are looking to avoid the cost of properly disposing of materials.

On an individual or household basis, there is sometimes a simple lack of awareness about the options that exist.

“Some people don’t know they can call Sanitation, so they just throw it out,” said a 311 communications information specialist who asked not to use their name because the person is not authorized to speak to the media. “If it’s placed on city property and it’s not scheduled for a pickup, technically you’re illegally dumping.”

The 311 specialist said there are few surprises when it comes to the things people ask to be picked up. Requests include beds, refrigerators, tires, sofas, televisions and microwaves. California Penal Code makes illegal dumping on public and private property punishable with a fine up to $10,000. Repeat offenders can be sentenced to up to six months in prison.

A wave of illegal dumping last year prompted Mayor Eric Garcetti to unveil plans to crack down on habitual offenders. Last June he announced that the city would use undercover surveillance crews, new cameras and lighting, as well as enhanced enforcement, to make sure businesses follow the law.

“Our streets are not dumpsters. Every Angeleno should take pride in how L.A. looks, and each one of us has a responsibility to keep our city clean and safe,” Garcetti said in a prepared statement.

The city collected 11,531.62 tons of garbage during the first six months of this year, a nearly 86% increase from the same time in 2019, according to data provided by LASAN. That’s enough trash to fill the Staples Center 167 times.

According to Garcia of LASAN, the city usually sees a spike in the spring, but this year the rise began earlier in March, likely because of the Safer At Home directive.

Clean Up Requests Through July Were Up Nearly 7%

Certain communities have emerged as hubs of illegal dumping. The neighborhood of Sun Valley recorded 1,652 illegal dumping calls in the first seven months of this year, the highest in the city. The problem was also pronounced in Panorama City (1,202 calls) and Van Nuys (1,128 calls).

John DiGregorio, chair of the board of directors for the Panorama City Neighborhood Council, acknowledged the community has a significant problem with illegal dumping, and is seeking to educate the public to reduce the practice. He added that the council has been working with the office of Sixth District Councilmember Nury Martinez to arrange more frequent pick-ups, including at notorious dumping hot spots.

“We have a great deal of pride in this neighborhood and think taking care of your trash is ground zero for personal accountability and responsibility,” he said, “whether it’s the failure of the city to respond to a request, or our own failure to abide by the rules of how to have our items picked up.”

Perla Iliana Lagunas Abundez, president of the trade committee for the Panorama City Neighborhood Council, said there has been some confusion about reporting through the 311 system, including getting returned emails that claim reported items are inaccessible to trash collectors. LASAN’s Garcia said in some cases, oversized items on the street require a larger cleanup crew, which is usually not immediately available. That means items can spend a longer period on the street before being picked up.

“There are a lot of apartments in Panorama City and people throw stuff out,” Garcia said. “We don’t ignore anything, we handle it from the smallest to the largest.”

The situation is similar in Koreatown, which also ranked in the top 10 of neighborhoods with the most dumping reports. A spokesperson for the Wilshire Center Koreatown Neighborhood Council said the group is working with local council offices to identify the problem and come up with solutions.

Garcia said the additional resources enabled by Garcetti’s crackdown, such as surveillance cameras and increased fines, can help to hold people who are dumping accountable.

“We are never going to ease up on the pursuit of people who use our public rights of way as their personal trash cans,” said Garcia.

A county problem, too

Vanessa Martinez, a public information officer for the County Public Works department, theorized that one reason for the increase in dumping is a public outreach and media campaign to encourage residents to report the practice.

East Los Angeles ranked as one of the 10 neighborhoods in the county last year with the highest number of illegal dumping pick-up requests. Reginald Hoffman, a sergeant in the East Los Angeles Sheriff’s station, said one reason for the prevalence of dumping is because the neighborhood is in a high commerce area near the 5 freeway.

“If we catch someone, it depends on the amount, but they will get a citation for dumping property on someone else’s land and they have to go to court within two months,” said Hoffman. “If you get caught doing it the judge can say you will do time.”

How we did it: We examined data from My LA 311 and Los Angeles County Sheriff’s data on requests for illegal dumping pickups from Jan. 1, 2010 – July 31, 2020. For neighborhood boundaries, we rely on the borders defined by the Los Angeles Times. Learn more about our data here.

Want to know how your neighborhood fares? Or simply just interested in our data? Email us at askus@xtown.la.

I think often people put out stuff they think others may take before destined for landfill. Maybe some do not like how it looks. So we should make sure it is taken in a day or sonnet sitting out tote elements. but for that first day or two, most objects actually are taken and used again instead of harming the environment y filling landfill and producing and transported said new item. But if it is not taken, please remove your items and dispose properly.