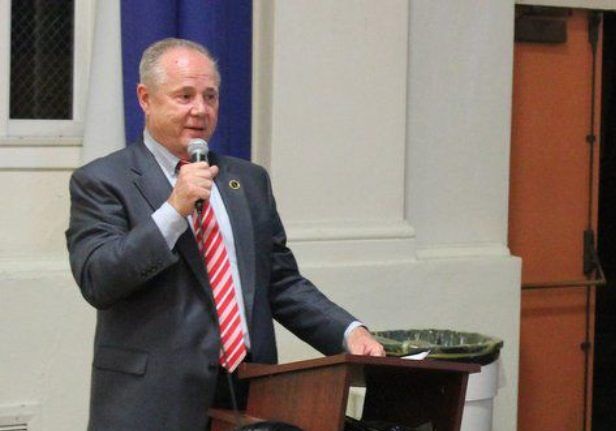 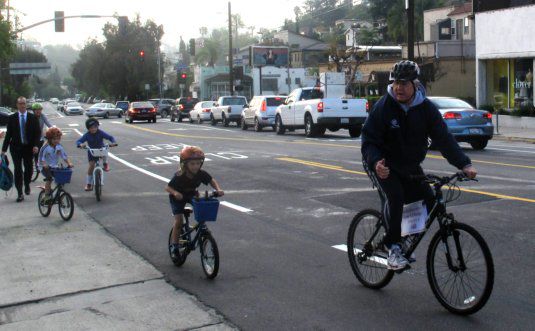 LaBonge died Thursday at age 67. He represented the council's Fourth District from 2001-15, overseeing an area that includes Koreatown, Mid- Wilshire, the Miracle Mile, Fairfax District and much of Hollywood, Silver Lake, Los Feliz and Griffith Park.

Mayor Eric Garcetti, who represented the neighboring 13th District on the council, said on Twitter: "We often said that while we shared a border, there was no dividing line between us, our work, and our districts.

"From the revitalization of Hollywood to the preservation of Silver Lake, there was no better friend or partner I ever had. No one knew more Angelenos, no person gave more waking hours to our city, no one was a greater cheerleader for our town than Tom."

"In a city of 4 million Angelenos, Tom LaBonge was Mr. Los Angeles," they said. "He was a true public servant who was never afraid to roll up his sleeves or pull a city worker over if a constituent needed help or a street needed servicing at a moment's notice. He knew every mascot of every high school in Los Angeles for a reason -- so he could engage people and talk to them about their lives. As a council member, he took care of his constituents and was a champion of one of L.A.'s greatest treasures, Griffith Park. Tom LaBonge loved Los Angeles and Los Angeles loved him right back. To quote Tom, he is forever an angel in the City of Angels."

"Nobody loved this city more than Tom LaBonge and I don't know if anyone ever will," Hahn said. "He was and will always be Mr. Los Angeles. May my dear friend rest in peace."

LaBonge's wife, Brigid, told the Los Angeles Times her husband had been resting on the couch at their Silver Lake home, and she was unable to wake him, prompting her to call paramedics.

LaBonge was a city employee or councilman for nearly 40 years. He went to work for Councilwoman Peggy Stevenson of the 13th District in 1976, then joined Council President John Ferraro's Fourth Council District office in 1978.

-- restoration and expansion of Griffith Observatory; and

-- the Fallen Firefighter Memorial in Hollywood.

On June 30, 2015, his final day on the City Council, his colleagues designated the intersection of Tracy and St. George streets in front of John Marshall High School in Los Feliz as Tom LaBonge Square for his contributions to his alma mater.

LaBonge helped lead the efforts to save the school's Gothic main building, which was slated for demolition after the 1971 Sylmar earthquake.

He later worked with the Los Angeles Unified School District Board of Education and Los Angeles County to fund and build the school's Mike Haynes Stadium & Hugh Boyd Field, which are used for football games and track meets.

LaBonge was known for his outsized personality, reflected in his deep knowledge of high school football teams, penchant for big hugs and love of classic Los Angeles institutions such as Pink's Hot Dogs along with his hands- on approach to serving constituents. He was frequently spotted hiking through Griffith Park.

LaBonge was also a big proponent of preparing for the next big earthquake, long before the push to seismically fortify the city's buildings and infrastructure.

After leaving the City Council because of term limits, LaBonge founded The LaBonge Consulting Group, which he described on his LinkedIn page as "an extension of my ability to create relationships and connect people with the common goal of fortifying the cultural ties of this great city."

"No one knew more about L.A., worked harder for us or served with greater energy or commitment than Tom," de Leon wrote on his Twitter page. "He will forever be one of Los Angeles' most beloved Angels."

City Attorney Mike Feuer added, "Tom had an incredible love for Los Angeles and committed his life to serving its people. He was truly one of a kind and will be sorely missed."

Dwayne Gathers, chairman of the board of the Hollywood Chamber of Commerce, hailed LaBonge for his work revitalizing the Hollywood area.

"Hollywood lost a great friend and supporter with the passing of former Council member Tom LaBonge," he said. "Tom was L.A.'s biggest cheerleader and played an instrumental role in Hollywood's revitalization and renaissance. Working with Tom over many years, the Hollywood Chamber knew him to be a great supporter of the men and women who serve the city and its diverse communities, including our first responders with the Los Angeles Police and Fire Departments.

"He played a critical role in saving the land that the iconic Hollywood Sign sits on. And he could always be found on the trails of our beloved Griffith Park -- whether working on beautification projects or greeting visitors and inquiring where they were from, or -- more often than not -- offering directions."

Councilman Mitch O'Farrell, who worked alongside LaBonge from 2013-15, remembered him as a "force of nature and goodness."

"Tom was the ultimate ambassador for Los Angeles where he brought into sharp focus his zest for life, his tireless pursuit of service and his firm belief that anything was possible. Our city was what he dedicated his life to and for that I will be eternally grateful," O'Farrell said.