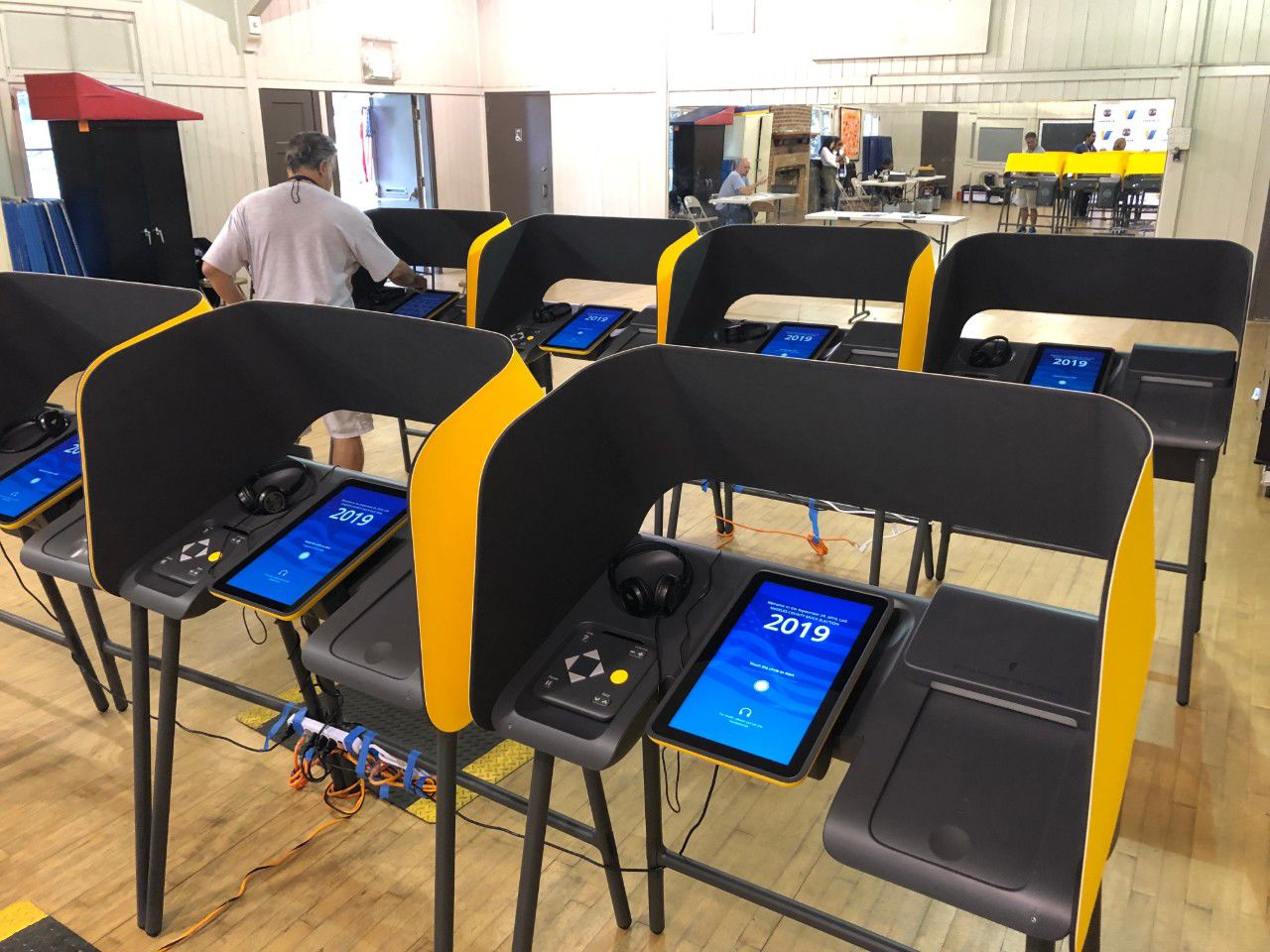 New ballot marker devices awaited voters during a trial run of the new voting system at the Yosemite Recreation Center in Eagle Rock. 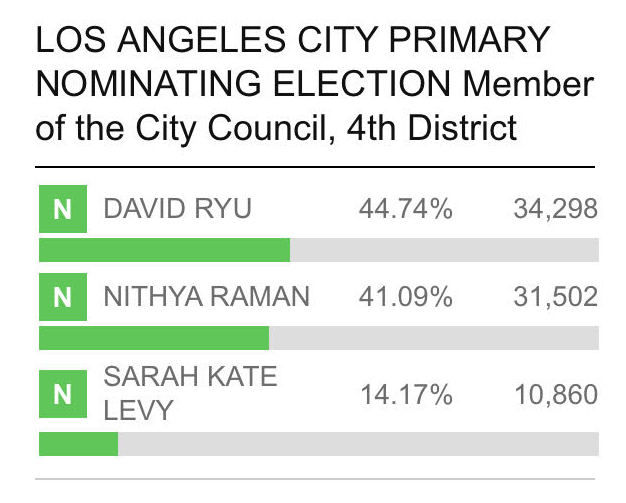 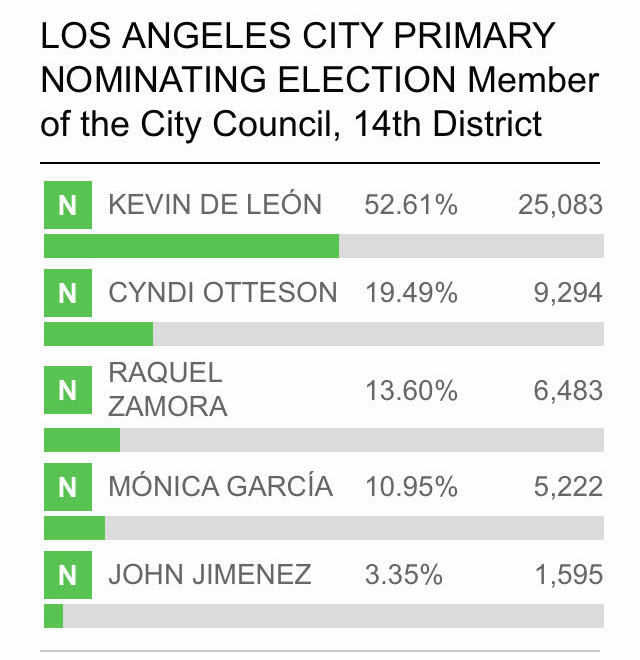 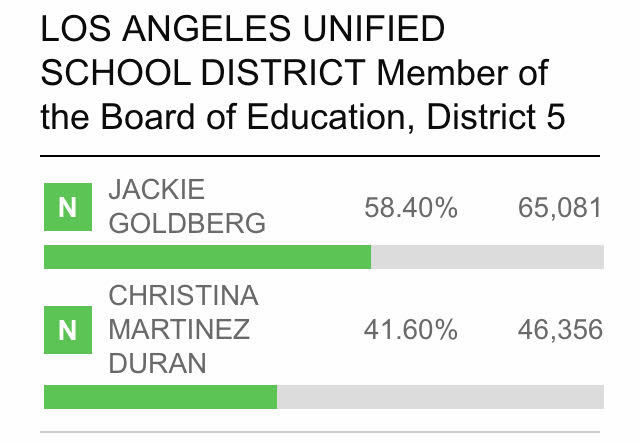 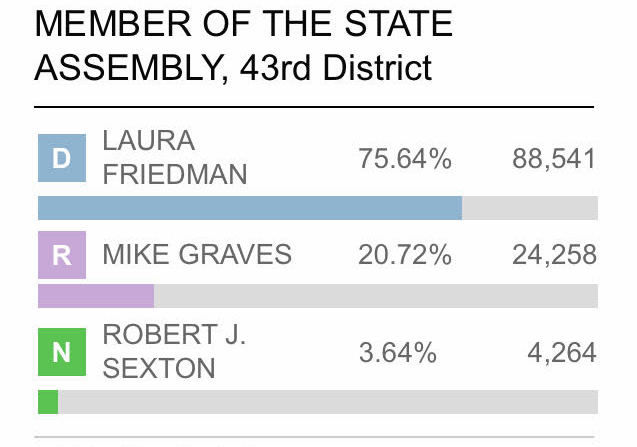 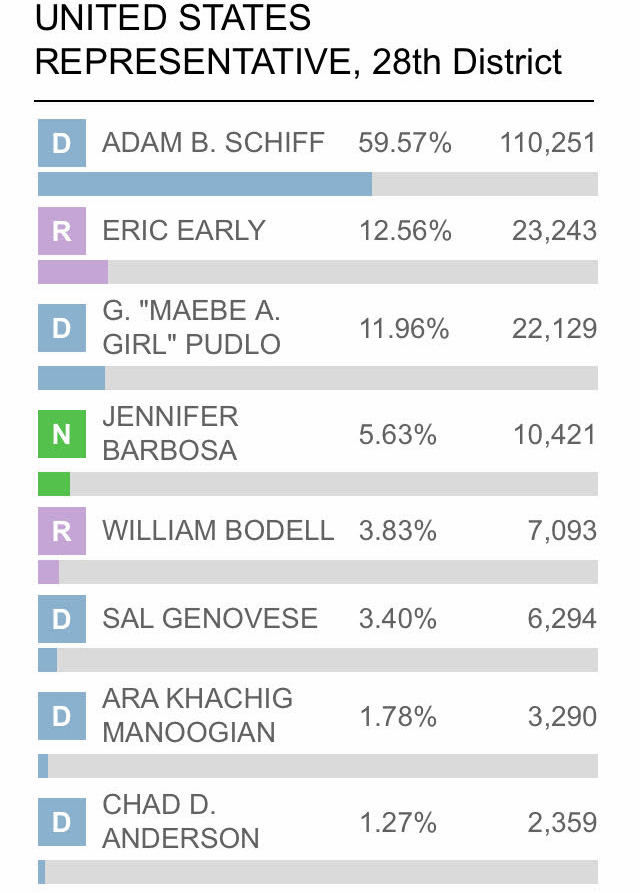 The March 3 primary is a distant memory in light of the coronavirus outbreak, panic buying and stay-at-home orders.

But on Friday, the final, certified results of that election were released, confirming victory for candidates like Kevin de León in the Council District 14 race and incumbent school member Jackie Goldberg. Meanwhile, Council District 4 incumbent David Ryu will face activist Nithya Raman in a runoff election this fall.

David Ryu in a Runoff

Ryu, whose district stretches from Los Feliz to Sherman Oaks, failed to win 50% or more of the vote, forcing him into a runoff with Raman, a homeless nonprofit leader. The first-time council member finished first in the March 3 election with 44.7% of the vote, while Raman received 41.1%

Ryu was far ahead of his two rivals when it came to raising campaign donations and major endorsements, including that of the Los Angeles Times. But he was criticized during the campaign for his handling of the homeless crisis.

The L.A. Times also notes  also notes that some of Ryu’s decisions have riled progressives. That included his voted to reinstate restrictions on where people can live in their cars and when the City Council's Homelessness & Poverty Committee forwarded a new set of proposed restrictions on sleeping on sidewalks before he’d really had a chance to review it.

She also authored a report for the L.A. City Administrative Officer in 2014, showing how the city was spending over $100 million on homelessness, with most of the money going to jailing the homeless rather than finding them stable housing.

De Leon won the 14th Council District seat outright, winning 52.6% of the vote to succeed termed Jose Huizar. Second-place rival, community activist Cyndi Otteson, had a little more than 19.49% of the vote based on figures posted on Friday by the L.A. County Registrar-Records/County Clerk.

De León had an outsized amount of political experience, connections and cash backing him against the four other candidates in the race.

But candidate Kevin de León, as former head of the California State Senate, is bringing an outsized amount of political experience and connections to the race.

Huizar ends his term on a complicated note. His home and office were raided by the FBI two years ago, but no charges have been filed.

• Incumbent school board member Jackie Goldberg won with 58% of the vote in the contest for LA Unified District 5, which stretches from East Los Angeles and Los Feliz, after being targeted by a barrage of negative campaign mailers.

• Incumbent Congressman Adam Schiff was the winner of the 28th Congressional District (Atwater Village, Echo Park & Silver Lake) with nearly 60% of the vote. One of his election rivals is drag queen and Silver Lake Neighborhood Council member G. "Maebe A. Girl" Pudlo. Maebe, who was the co-star of an Echo Park dinner-and-drag show, came in third place.

• Incumbent Laura Friedman easily avoided a runoff with more than 75 of the ballots in the race for the 43rd Assembly District, which includes all or portions of Atwater Village, Los Feliz and Silver Lake.

• Incumbent Wendy Carrillo ran unopposed in of the 51st Assembly District, which stretches from Eagle Rock to East Los Angeles.

• District Attorney Jackie Lacey will have to compete in a November runoff against former San Francisco D.A. George Gascon in her bid for reelection. Lacey had been hoping to avoid the runoff and initially earned more than 50% of the vote.

• Current County Supervisor and longtime politician Mark Ridley-Thomas will  face a runoff election in the 10th Council District, facing attorney Grace Yoo, who received 23.6% of the vote to his 44.31%

The runoff election will be held Nov. 3.

A spokesman for De León told the Times that with only about 400 ballots left to count, it would be impossible for another candidate emerge as the winner.