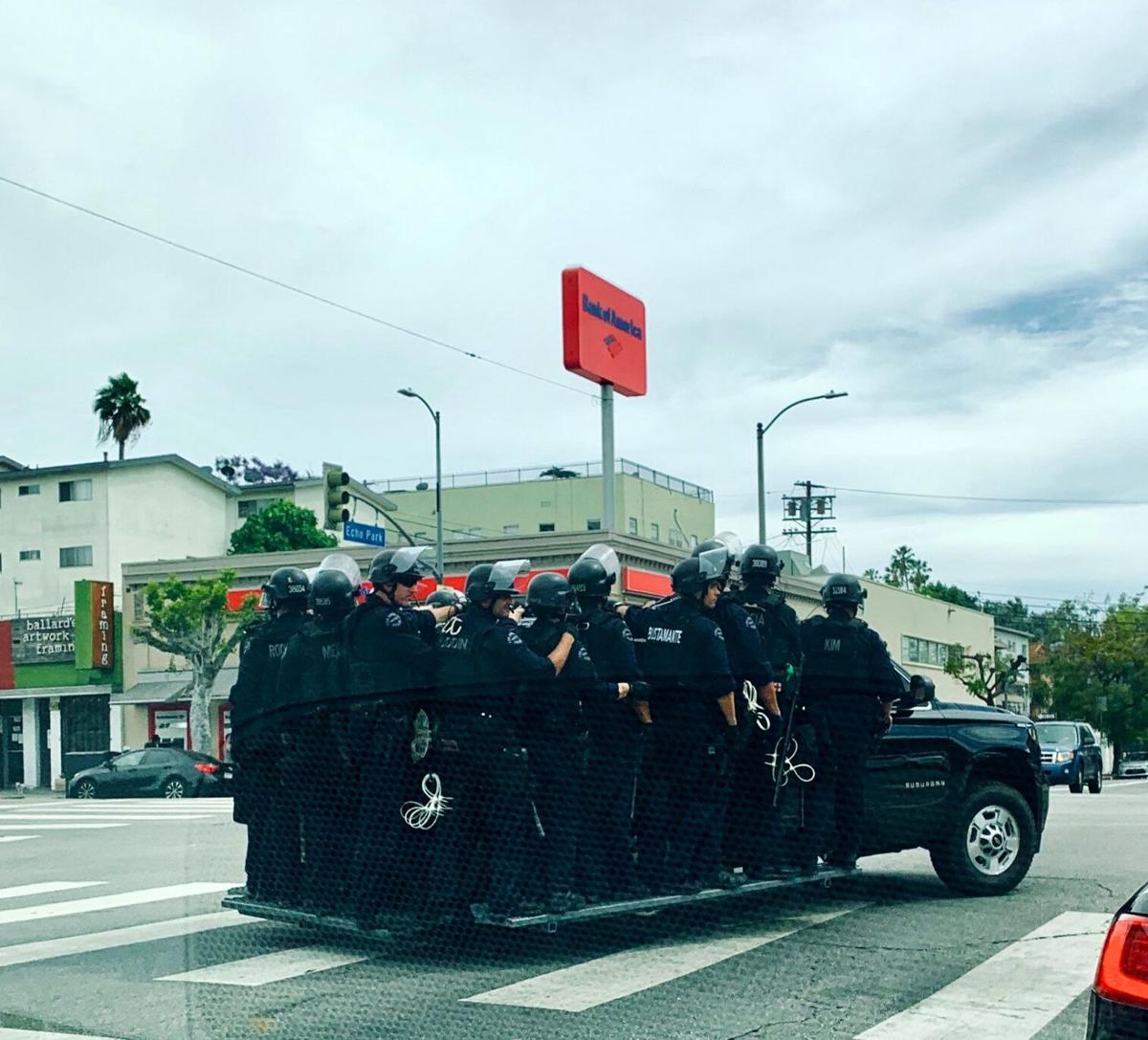 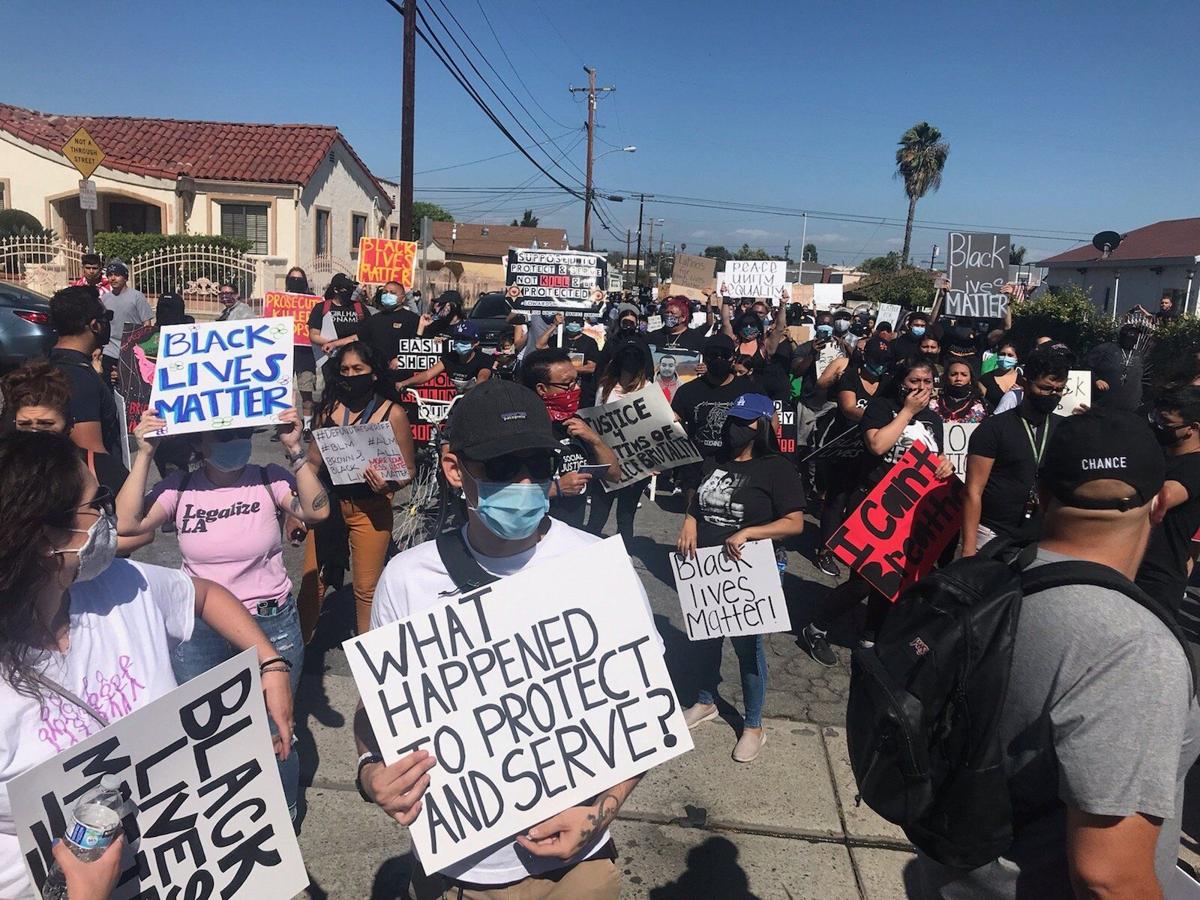 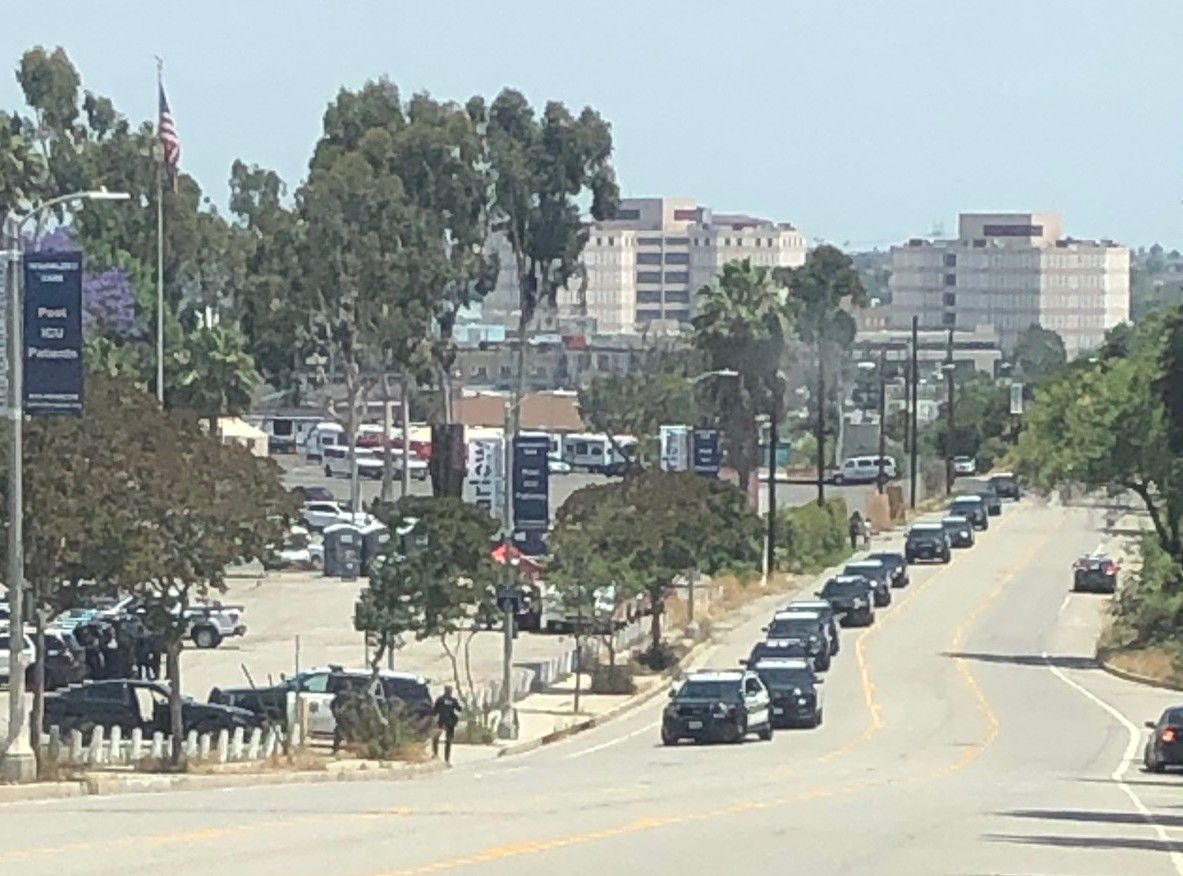 A long line of LAPD patrol vehicles lined up on Stadium Way near Dodger Stadium.

Webster’s dictionary defines "defund" as "to withdraw funding from." And this, unfortunately, is as much as Webster’s can help us figure out what different people mean when they say "defund police."

Defund by how much? The department's entire budget? A lot of it? A little of it?

"It was to my attention that they want to take away the money and put it someplace else," said Johnny Gurski, vice president of the L.A.-32 Neighborhood Council and the chair of its Public Safety Committee. "But what do people do when they get in trouble? What do they do? They call the police."

The defund movement has already had a practical effect on the city’s budget. Mayor Eric Garcetti backed away from plans to increase the LAPD’s budget next year by 7% - about $122 million. It’s unclear, however, where that money will go instead.

Three Eastside city council members -- Gil Cedillo, Mitch O'Farrell and David Ryu -- shared with us their positions on calls to cut or shift police funding amid a nationwide movement for police reform.  The office of Councilmember Jose Huizar -- whose 14th Council District includes Boyle Heights, El Sereno and portions of Highland Park -- did not respond to our request for his take on defunding the police.

A search for alternatives

Councilmembers Mitch O’Farrell (Dist. 13) and David Ryu, (Dist. 4) are looking at possible alternatives to police in some cases.

O’Farrell said he has signed onto an initiative "that develops an unarmed model of crisis response, diverting non-violent related emergency calls for service away from police officers and to the appropriate social service agencies."

He added, "Calls to defund the police are an opportunity for us to reevaluate spending priorities with a focus on programs that will help lift people out of poverty and re-invest in historically marginalized, neglected communities where institutional racism has had a devastating effect ... The income and health outcome disparities paint a clear picture of neglect

Ryu along with council members Mike Bonin (Dist. 11) and Marqueece Harris-Dawson (Dist. 8) - has proposed creating an Office of Violence Prevention. The office - possibly through civilian teams or a non-profit organization - would create public safety plans that fit the specific neighborhoods, disrupting and preventing violence before it started.

"We should not send a police officer to do a counselor's job," Ryu said in a statement. "And we do not solve issues of poverty, inequity and systemic racism with law enforcement. An Office of Violence Prevention would work to address these issues at the root, relying less on law enforcement and more on community empowerment, social services, and restorative justice.”

O'Farrell also emphasized the importance of community policing - combined with neighborhood involvement - in developing a custom-fit model for each neighborhood.

"We have models that work," O'Farrell said, "models that reduce crime and keep crime low, and these models almost always involve residents, intervention and prevention specialists, and police officers, working in collaboration.

However, Councilmember Gil Cedillo (Dist. 1) expressed doubts about sending out others to do police work - worrying that police could be replaced with less qualified contractors.

Though other agencies could direct traffic, check subway fares, and respond to mental health issues among the homeless, “I am concerned … that many of these services will be privatized to for-profit companies that hire 'gig workers' instead of trained public servants,” Cedillo said in a recent statement. "That’s the global trend."

Plus, some ideas for reallocating funds fall outside the city’s purview, he said.

"Using LAPD funds for health services, for example, misses the mark because the City doesn’t operate any medical facilities," Cedillo said. "That is a County mission. Others want those funds used for education, but that is an LAUSD mission."

That said, Cedillo supported increased funding in other areas.

"I suggest we focus more resources on our youth…," he said. "Free citywide Wi-Fi would be a good start, and we can expand and extend the Summer Night Lights program in City parks. Funding community based organizations like Homeboy Industries is also a good idea."

He noted, however, where the LAPD had things to boast about.

"The homicide rate in 2019 was the lowest since 1962…," Cedillo said. "The men and women who wear the badge today mirror the communities they serve closer than any time in my life. The majority of our officers are people of color. This isn’t Daryl Gates’ LAPD, and it certainly isn’t William Parker’s."

Defund LAUSD, they are by far far the BIGGEST waste of money...ALL of the inner city LAUSD schools are the worst in the Nation.

LAUSD schools in South Central and East Los Angeles have some of the worst teachers and in reflects in students test scores. A big reason is teacher tenure, it's impossible to get rid of the bad teachers, also thanks to the UNION. LAUSD does NOT care about inner city students just their pay checks!

I think you mean break up LAUSD and defund board members. Education is a right to be had by all, not just the ones who can afford it. We need schools and we need teachers in our communities.

You're right, however, in the inner city we need good schools and teachers, none of which the students have now...so yes, absolutely break up LAUSD, do away with teacher tenure, and remove and defund school board members.