Police were planning for another challenging day of demonstrations today, including one in Boyle Heights, after multiple businesses were looted and hundreds arrested Friday night and early this morning during George Floyd protests in Downtown Los Angeles.

Some of today's events include:

• At noon a demonstration calling for justice for Floyd and immediate safe release of prisoners in the Men's Central Jail and Twin Towers Correctional Facility. Demonstrators are scheduled to meet on the corner of Alhambra Avenue and Vignes Street, then caravan to the jail facilities and end with a rally at LAPD headquarters.

• Also at noon, Black Lives Matter Los Angeles will hold a rally at Pan Pacific Park, 7600 Beverly Blvd., to call for an end to police brutality against unarmed black Americans and for justice in the death of Floyd and for "the 601 people murdered by police in L.A. County."

• Another protest, hosted by the Coalition for Community Control Over the Police, is set for 1 p.m. outside LAPD's Southeast Station, 145 W 108th St. and will include a march to the Los Angeles County Sheriff's office at 1310 W. Imperial Highway.

• At 3 p.m., a demonstration is scheduled at Mariachi Plaza, 1831 E. First St., in Boyle Heights to demand the release of all prisoners, as well as an end to police terror and "crime against Latinos and blacks."

On social media, organizers of the Boyle Heights demonstration encouraged participants to "remain safe" while others asked that the neighborhood be spared any violence. 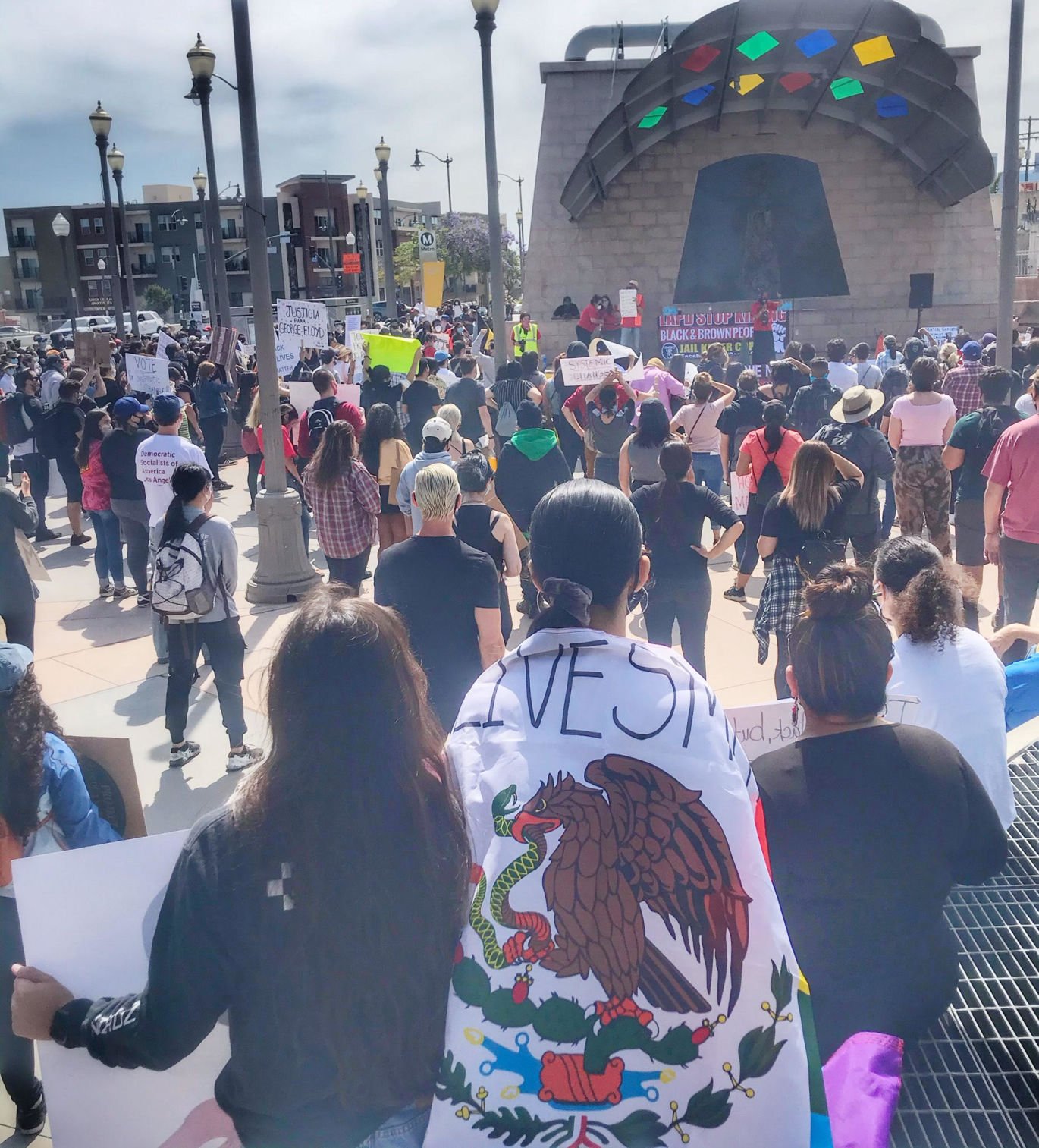 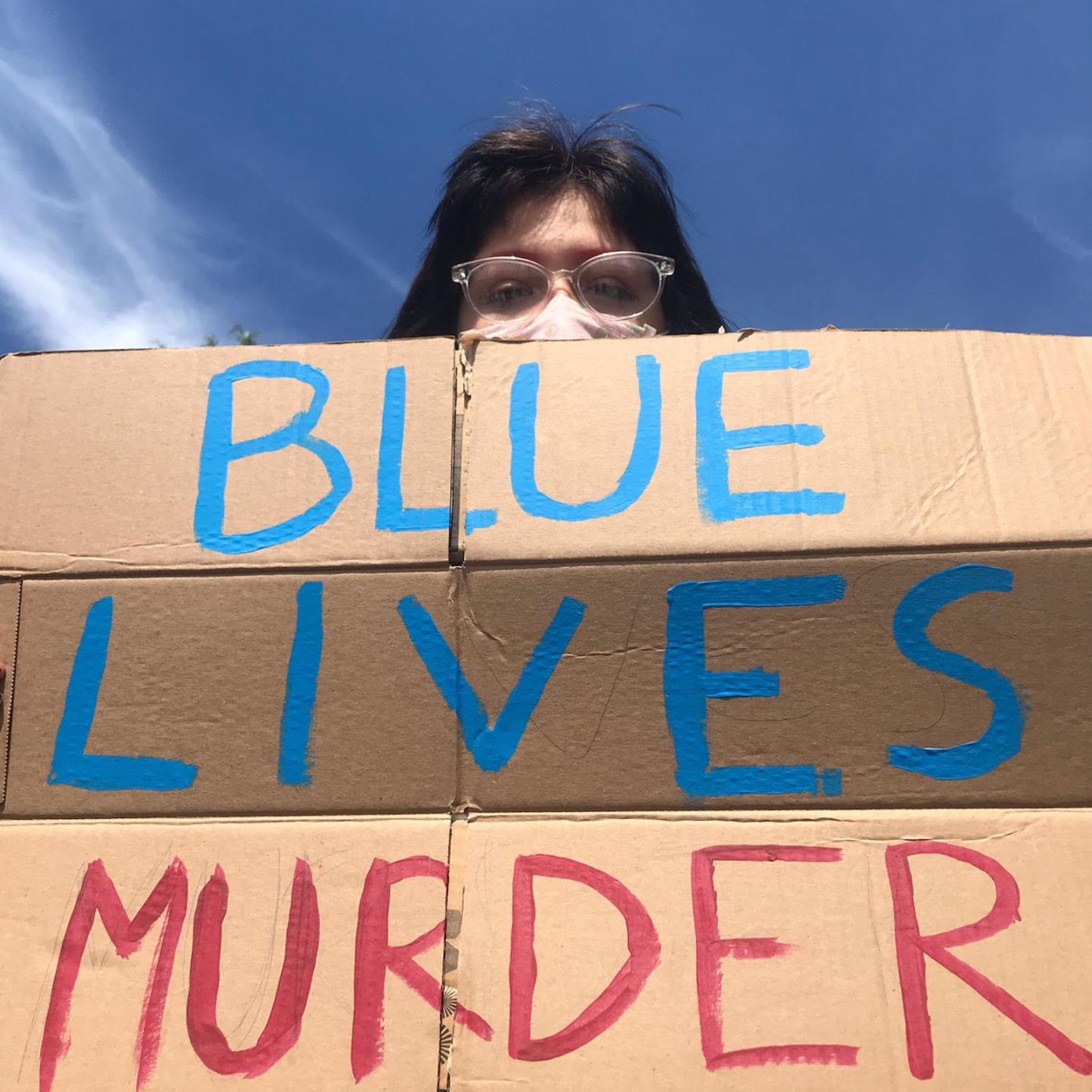 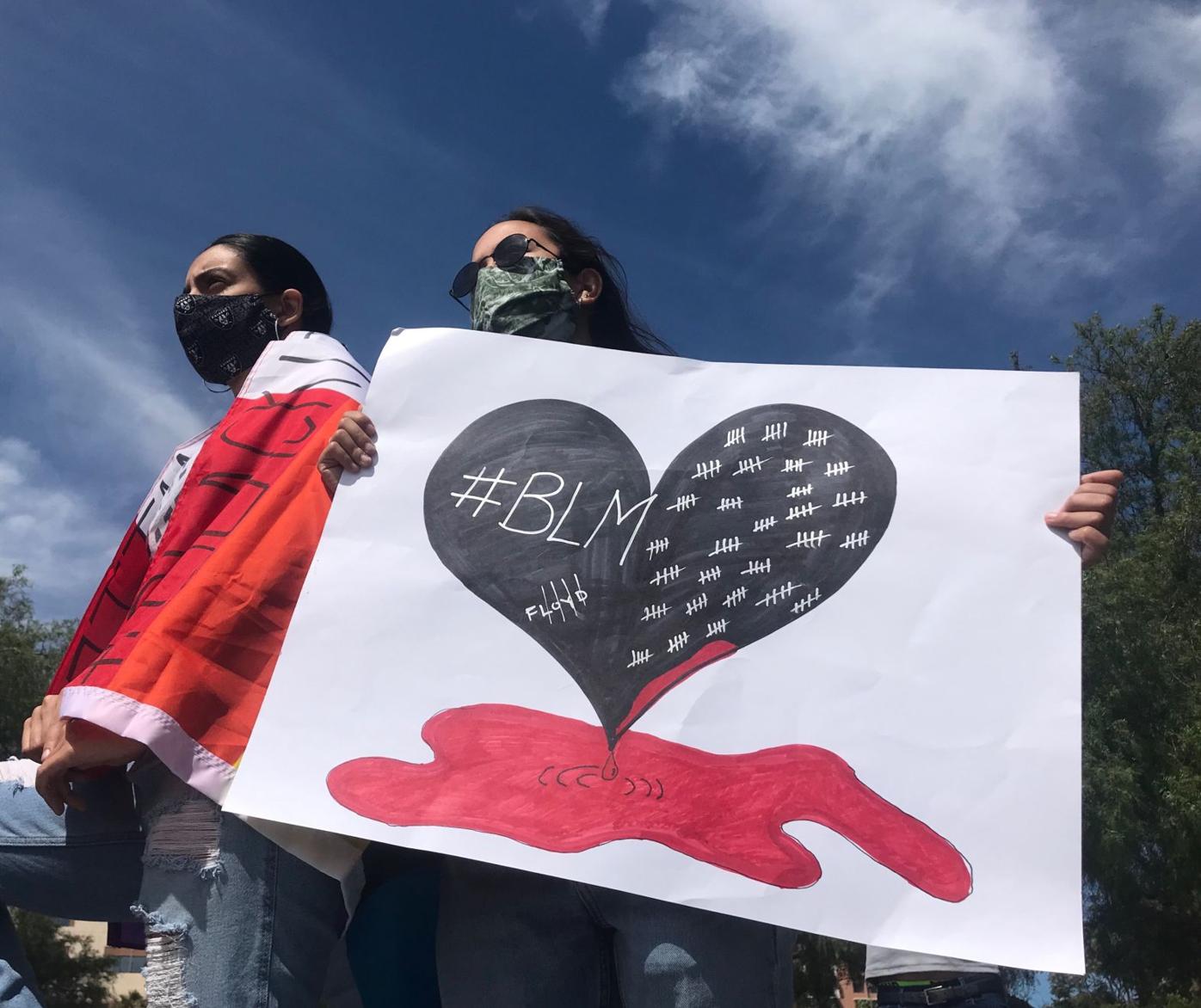 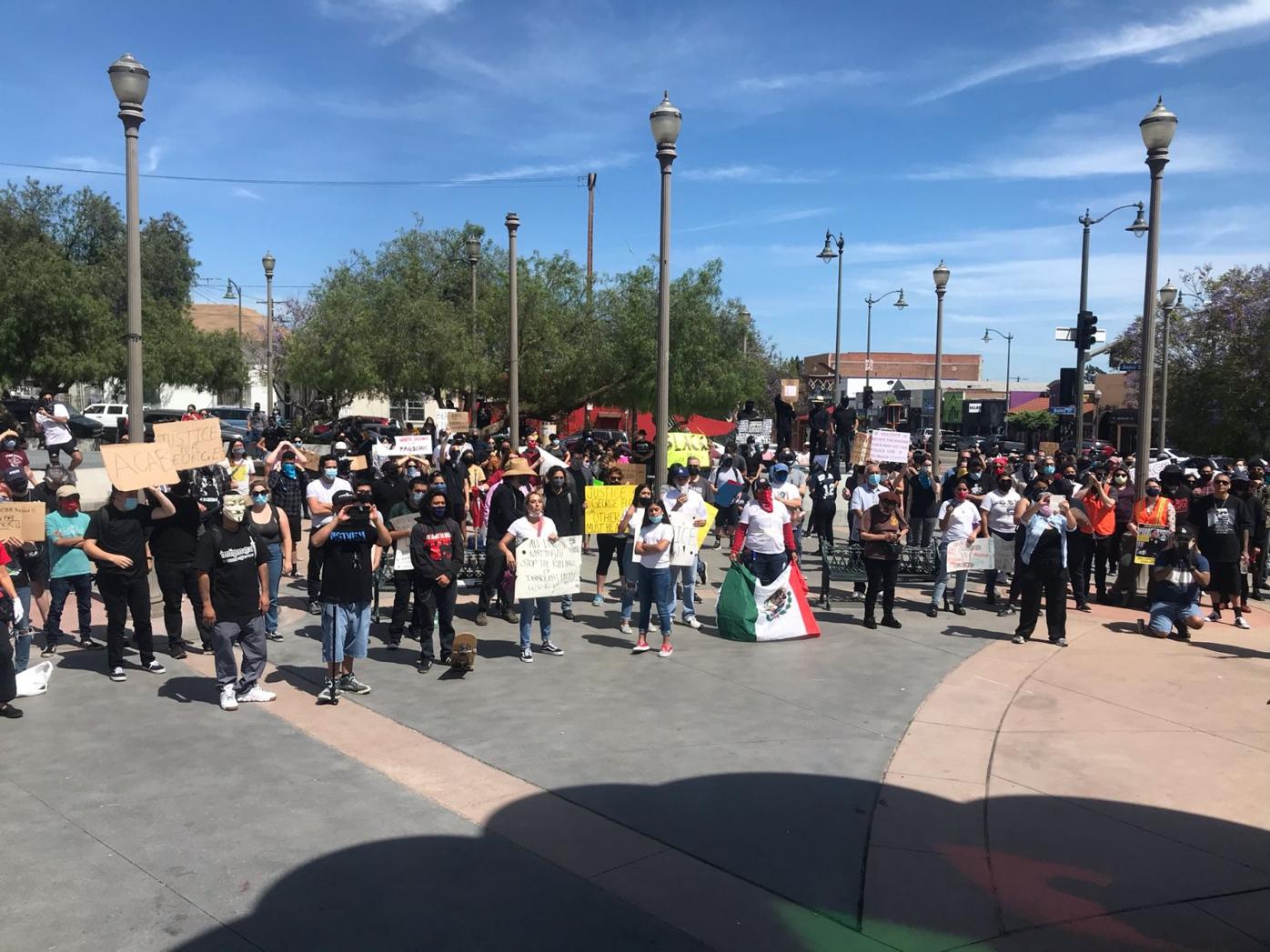 Protesters at a demonstration in Boyle Heights practiced social distancing and organizers handed out face masks. 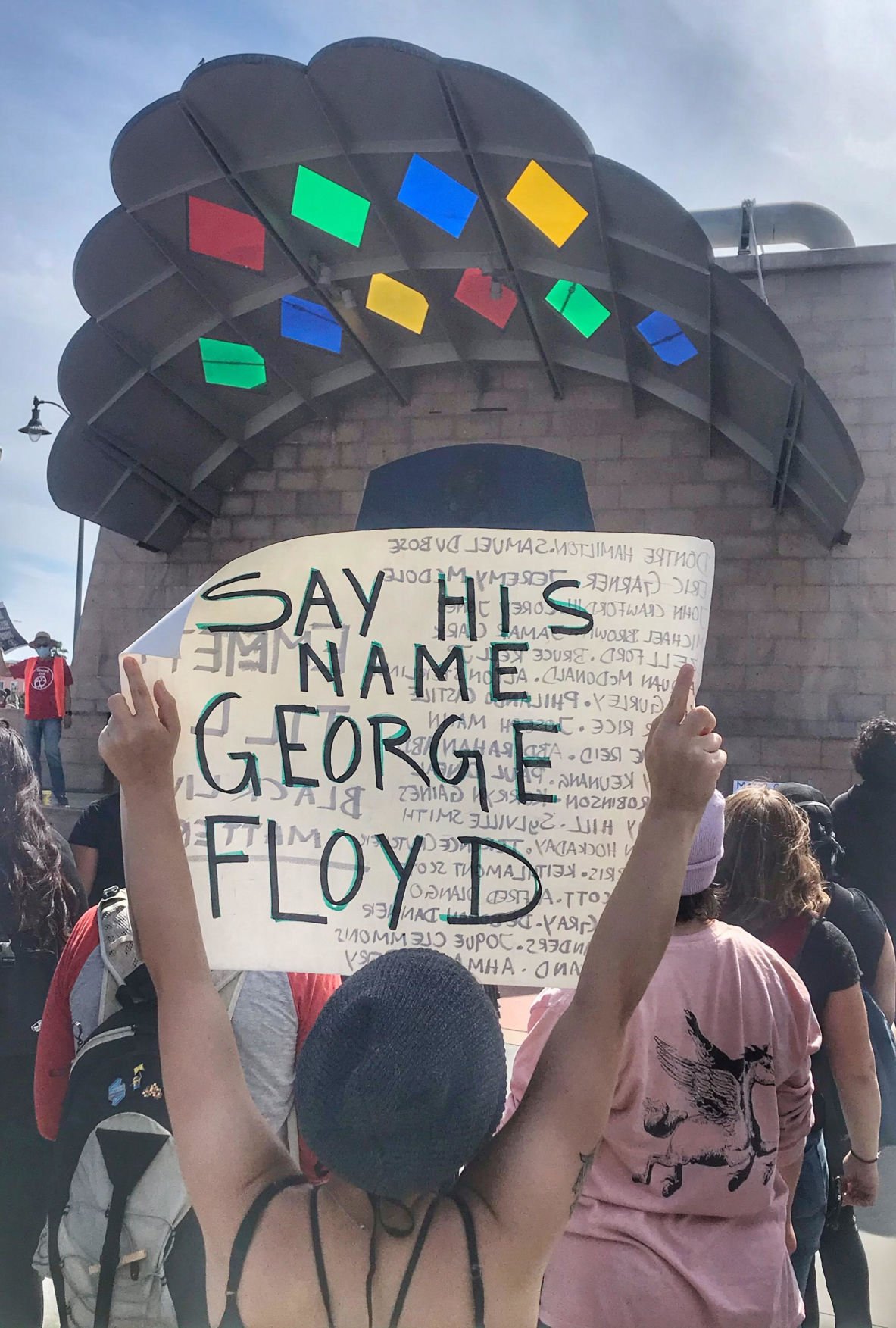 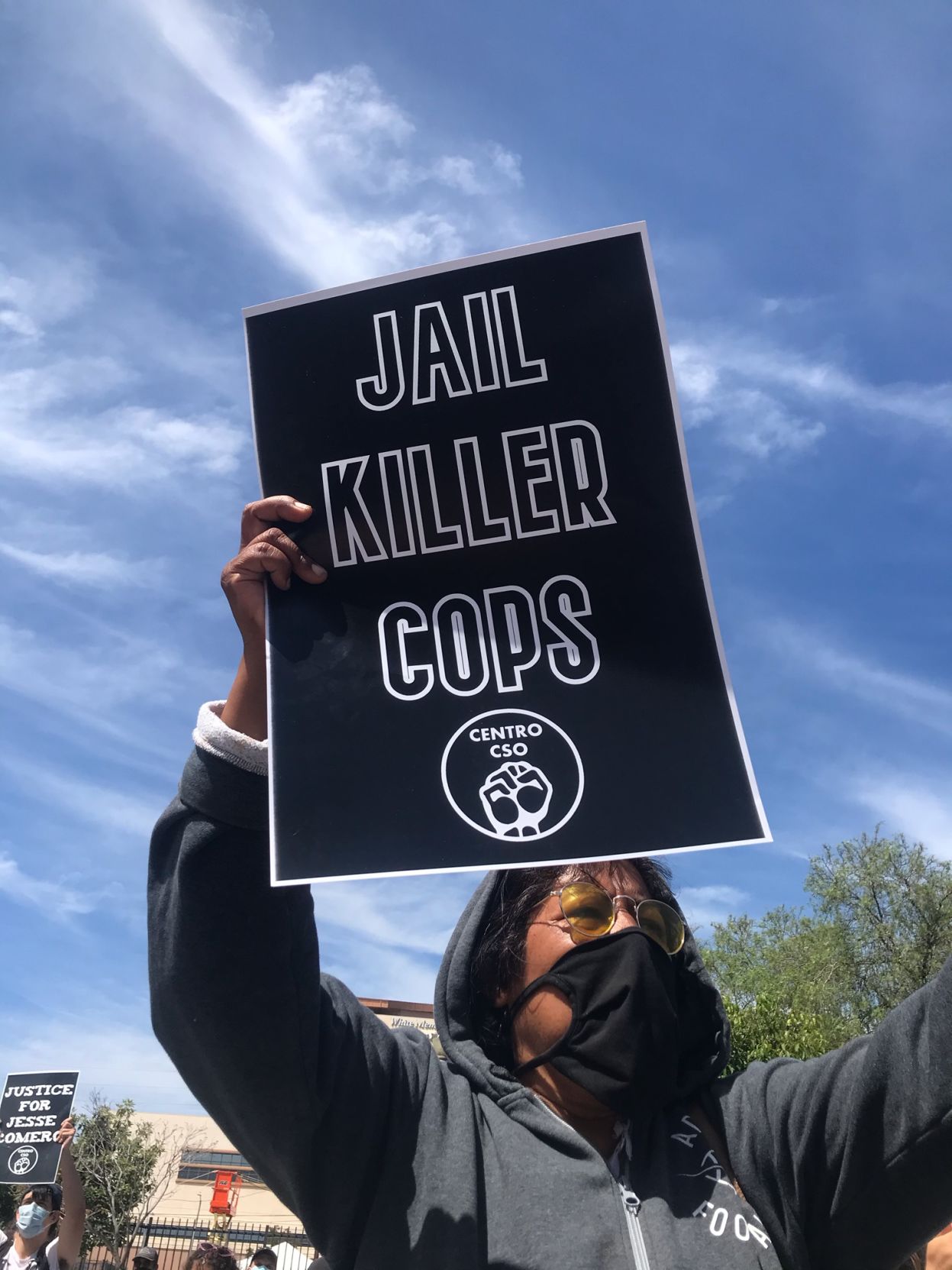 An afternoon of protest at Mariachi Plaza

An estimated 200 to 300 people gathered at Mariachi Plaza this afternoon to protest police brutality and the killing of George Floyd. It appeared that most of the protestors wore face coverings and tried to keep apart as they followed social distancing guidelines. Organizers provided face coverings but most brought their owner, said photographer Aurelio Jose Barrera

Protesters at a demonstration in Boyle Heights practiced social distancing and organizers handed out face masks.

The watch commander at the LAPD Hollenbeck Division station, located a few blocks from Mariachi Plaza, said police units have been assigned to Boyle Heights demonstration but she said it looked it would a be a peaceful protest.

An official with the Los Angeles Police Department told City News Service the LAPD has a plan in place for keeping the peace during Saturday's events, but was not releasing further details.

People took to the streets Friday for the third consecutive night to demand justice for George Floyd, who died Monday after being handcuffed and pinned to the ground by a white Minneapolis Police Department officer, Derek Chauvin, who pressed his knee on the 46-year-old man's neck for several minutes while three other officers looked on.

The LAPD said a total of 533 arrests involving changes ranging from looting to attempted murder were made in connection with the Downtown L.A. protests.  All but 18 of the arrestees have released on their own recognizance.

Six officers were injured what what were described as non-life-threatening injuries.

“I am asking for all of Los Angeles to come together and find the ability to peacefully express individual and collective grievances while also maintaining the safety of all of Angelenos," said LAPD Chief Michel Moore in a statement.

Friday night saw police set up skirmish lines throughout the downtown area  and, in at least one instance, fired non-lethal ammunition as they pushed a crowd out of the area, some in the crowd stopping to hide behind vehicles to throw objects at officers.

An officer was put in a chokehold and kicked by some protesters in the Pershing Square area, according to broadcast reports from the scene. It was not clear if this was the same officer who was sent to a hospital with injuries from a confrontation with demonstrators.

The looting came about four hours after several people were detained shortly before 7 p.m. near Fifth and Olive streets for allegedly throwing objects at officers and damaging police cars that were parked near the intersection, according to broadcast reports from the scene.

The Target store at Seventh and Figueroa streets, a Rite Aid store at 7th and Hope streets, along with the 6th Street Market and the Starbucks on Sixth Street between Broadway and Main Street and jewelry stores near Sixth Street and Broadway were among the businesses looted just before midnight.

Shortly before 7:30 p.m., a group of about 100 blocked traffic on the Harbor (110) Freeway, near the James M. Wood Boulevard exit. They were cleared from the freeway, but re-entered near Fifth Street at 8:20 p.m.

The protest was declared an unlawful assembly shortly before 9:30 p.m. due to "repeated acts of violence and property damage," according to the LAPD.

for those of you who are planning to protest in boyle heights! don’t loot the family owned businesses plsss

People were advised to get off the streets and businesses were told to close in the downtown area from the Santa Monica (10) to the Santa Ana (101) freeways and the Harbor (110) Freeway to Alameda Street.

Some Downtown protestors took aim at the media.

KNX-AM (1070) reporter Pete Demetriou was attacked during the protests, he said on Twitter. About five people punched him before others came to his aid, and a woman grabbed his microphone and yelled obscenities into it, but he was able to push her away.

A photo also circulated on Twitter of an ABC7 van tagged with illegible graffiti.

Updated: This story was updated with photos and details from the demonstration in Boyle Heights

Get a job losers!